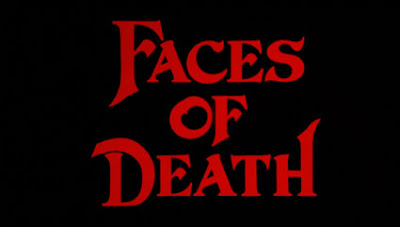 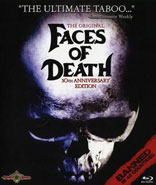 Say Faces of Death, and genre fans will either crack out a disturbing smile, or reach for a bucket to chuck up into. The notorious badass movie spawned out of the Italian Mondo Cane films (and the genre they created), and a definite kick-start of even viler stuff to come. Faces of Death stood out as a ritualistic ordeal for friends and admirers of extreme cinema. When talking gross out factor and cringing realism, Faces of Death was always one title that could be topic for discussion.

The first time I saw Faces of Death was probably in the early nineties when I was working in an underground video store that specialized in finding uncut versions of genre film. You could say that that’s where I educated myself on genre cinema, and gorged my brain with all the fantastic stuff I’d only ever read about previously. There was always something inexplicably captivating with Mondo flicks back in the day, and to see how television has changed these past decades, it’s easy to see that what we where spellbound and blown away by back then is standard procedure today.

With access to Dutch, Greek, Japanese and other tapes from god know where, there was no limit to the movie marathons soaking up obscure, wild, bizarre and fascinating films. In it’s big bulky Dutch VHS case with that infamous electrocution image, Faces of Death was something of a cornerstone, a bad boy renown for its cold approach to its subject matter, and an authenticity brought to the piece by Dr. Francis B. Gröss. Sure I always presumed that he was a fake, but at the same time, without Internet or fast ways of checking facts, who really knew if Gröss was real or not. Because none of us bothered or had copies crisp enough to see that Michael Carr actually is credited as Dr. Francis B. Gröss at the end of the credits 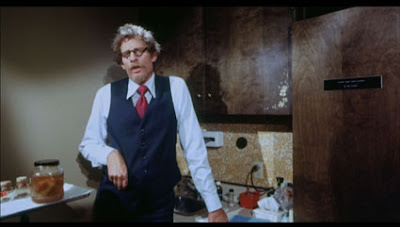 At the age of late teens, early twenties, there’s no surprise that we fell for the tricks – I can still vividly recall discussions of what was real footage and what wasn’t  - But today we know better, and we know that the majority of footage was faked, although some of it really well done and with an aura of being authentic Cunningly re-enacted and interwoven with archive footage that the filmmakers had access to as they previously where wildlife documentary filmmakers.

Tearing off with some very sensational stock footage of an authentic open-heart surgery, the film breathes realism into the opening of the film. It’s followed up with genuine shots of corpses and a real autopsy that was used to secure financers that the filmmakers really could pull off a shocking documentary that studied death in a serious – but totally exploitative way. But it’s all a cunning and manipulative trick to set us up for the introduction of Carr’s Dr. Francis B. Gröss (name pun anyone!). Dr. Gröss steps out of what we presume is the operating room or autopsy room we just saw the extreme material taking place in. Much like the way Ruggero Deodato would set us up with the faux documentary material two years later with Cannibal Holocaust, Le Cilaire set’s us up with this authentic material which makes us eat up all the horror to come as the gullible fools we have been manipulated into.

Faces of Death slowly works its way through its footage, starting out with the authentic human ends via animal deaths – slaughter houses – before working their movie making magic. Sure, sitting through footage of dogfights, animal slaughters, the consuming of monkey brains after smashing open its head, autopsies, open-heart surgery does become quite heavy after a while.  But it’s not until a half hour in when the first human death hit’s the screen, and without calling each scene classic – which they are – a sheriff is savaged by a stray crocodile he’s trying to rope in. Faces of Death chugs on wrapping bogus scenes with genuine autopsies, fake death cults, real snake charmers, idiots get to close to wild bears, set themselves on fire, and towards he end we even get cheesy proof of life after death… It’s a gallery of macabre and morbid moments, but at the same time almost impossible to stop watching, as Gröss guides us through the many faces of death he has taken to study during the years. Much like the nihilistic films of today that stick a quirky tune in the end credits to kind of wink at the joke of their dark movie, Faces of Death also desperately tries to stick a consoling or even redeeming finale to their movie, as a woman gives birth to new life. The cycle is complete and we have journeyed from death to life. Although, ironically the childbirth is the least graphic moment in this film as nudity was still a sensitive area in Japan at the time. 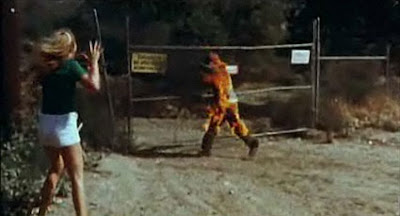 More than thirty years on, Faces of Death is still a fascinating film, totally exploitative, totally disturbing, but still a totally magnificent piece of tomfoolery and a well crafted horror show. Watching it in HD on BluRay is almost perverse compared to the first time viewing it on shoddy VHS tape with tracking issues colour dropouts and video static.  The images are totally lifted out of any dupe distortion, and VHS interference and presented in splendid new re-mastered clarity. Gorgon has really done a great job, but relieving this film of its crummy protective veil of old-school interference only serves to lift forth the flaws in clear daylight. For the time it was made, it is still pretty great stuff, but with the insight we have into movie making magic these days – special effects even have their own reality game shows now – some of the scenes do stick out as the simple effect shots they are. I never really reacted to the crap acting as much as I did this time. Perhaps the novelty has worn off and as a cynical adult I don’t fall for the old tricks as I used to.

It strikes me what a splendid craftsmanship has gone into the editing of Faces of Death as none of the footage is in raw shape (You would never edit real snuff!). Juxtaposition is often off kilter but sill effective in its own way, and the choice of music is at times only adding it on when comedic music almost mocks the terrible fates edited together. In 1999 – after directing whopping six sequels to the initial instalment - Cilaire directed Faces of Death: Fact of Fiction? where he partially reveals some of the fake material, but also declared that certain re-enacted material was authentic. A cunning lie to deceive fans and keep the myth and mysticism of the films alive. I don’t know how much use the somewhat vague investigation plot is – as that’s what Dr. Gröss is retelling us, his study and investigation into death. His conclusion is harsh and gloomy when he concludes that the movie proves that we are not as intelligent as we think we are. A rather cunning line when one stops to think about all the times we spent discussing what “had” to be real and not…

Originally made for the Japanese market (just like Sheldon Renan & Leonard Schrader’s Killing of America, a movie that showed the Zapruder film eons before Oliver Stone used it in JFK) Conan le Cilaire, the chosen pseudonym for creator John Alan Schwartz, was approached with the question of making a shockumentary feature where nature and it’s many deaths where in focus. Quite a logic way to go considering the amount of nature footage Schwartz had due to the nature film archive he had access to. Although wanting to do something outside of the animal kingdom, Schwartz and his minimal crew came up with the idea of taking a human approach to it instead. So they documented an authentic autopsy, and when they showed what they could come up with instead of animal carnage, the investors cried tears of exploitation gold. With the sensitive topic on display and raw violence of the film, almost everyone associated with the piece hid themselves behind pseudonyms as to keep a safe distance to the crude footage used and shot for the film.

Faces of Death is said to have out grossed Star Wars in Japan, but back in the states it failed miserably upon its theatrical release (in the States) by Aquarius in 1981. A failure that would change forever when it later became accessible on Videotape and firmly took its place in cineastes universe. Only time will tell what, if any, importance Faces of Death will hold in the history of genre, but one thing is certain, Faces of Death, real or not, still is a distressing piece of genre cinema. 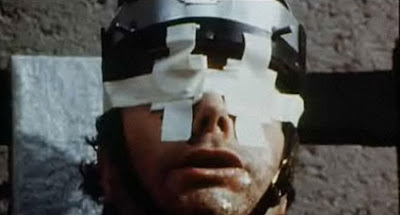 Today the original Faces of Death shouldn’t be as shocking as it used to be – but it is.  It's still a foul, depraved piece of extreme exploitation cinema with a sour aftertaste unchallenged by others. Faces of Death is still a rough ride. The authentic deaths and autopsy footage are still kind of hard to watch without reacting, and the movie does set a very macabre tone. Perhaps even more so watching it as an adult, and perhaps it's this fake interwoven with real footage that makes it such a cynical masterpiece of nihilistic carnage.  But the main reason to pick up this classic is to sit through the audio commentary with moderator Michael Felcher and Conan Le Clair  as they go through the movie, tell you about the production and reveal the nature stock footage, expose all the fake stuff they created, tell you what’s what and share some previously secret facts on how other famous filmmakers where inspired by scenes created for Faces of Death. It’s a great commentary and definitely entertaining to hear about all the brilliant tricks that where used to fool audiences for decades, how it influenced culture and the films to come. I personally found great pleasure with “Choice Cuts”, where editor Glenn Turner (who worked with Schwartz on nature films before the shocksploitation racket) talks about his part on the film, his approach to the material and how it all came to be. There’s also “The Death Makers”, a cool short featuring Allan A. Apone and Douglas J. White, the special effect makers of the fake scenes who tell their tale, deleted scenes, and to top it all off there’s even an outtake reel, which uncannily enough even contains longer takes of real death.

If for nothing else, Faces of Death is worth revisiting just to hear the commentary and enjoy the documentaries on this landmark of extreme cinema.
- January 19, 2013