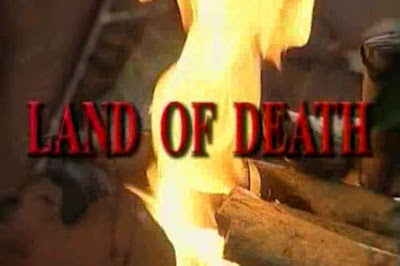 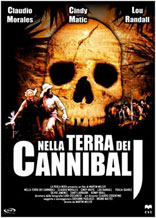 God damn it, I love Bruno Mattei’s films. No genre was too far fetched for him to take on and regurgitate his own low budget variants of. Renown for ripping off others, lifting stock footage and sometimes clips from other films, and at times even ripping off himself. But one can’t really aim criticism towards it, as it’s actually something I see as an important Bruno Mattei trait. Production value and anything to make it a better movie, that’s what I see Mattei’s plagiarism, theft and recycling to be. Dedicated filmmaker at his best, and if there’s ever one word that sums up Mattei, it is enthusiasm. 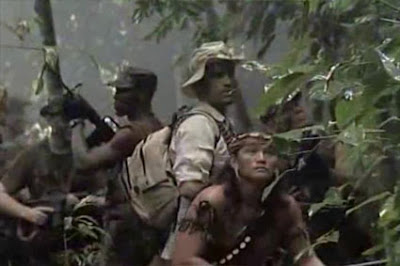 Also released as Cannibal Holocaust 3: Cannibal vs. Commando, Cannibal Ferox 3, Cannibal of Death, Land of Death is no masterpiece in any way, but it’s full of that classic Mattei enthusiasm, and where everyone else was desperately seeking new areas of genre, Mattei stuck to what he knew best, cheap low budget exploitation. I can’t believe that I still write something along the lines of that in each and every one of the pieces I write on Mattei cinema post 1990, but there’s something fascinating about that fact and his dedication to the cheap movies that made him the master of exploitation that he rightfully was.

This time around its jungle adventure with classic cannibal genre ingredients – complete with animal slaughters, punishment of “unfaithful Mrs cannibal”, gut munching, dismemberment, and nihilistic climax.  Not forgetting stock footage of helicopters and jungle wildlife. (It wouldn’t be a Mattei film without slightly out of focus faulty cropped wildlife stock footage would it?) 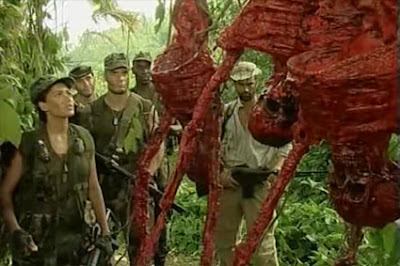 Taken deep into the green inferno by cool as fuck, pipe smoking guide Romero [Claudio Morales], a bunch of hard ass soldiers - lead by humorously clumsy rookie Lt. Wilson [Lou Randall] - are on a mission to find the daughter of Colonel Armstrong as she went missing on a previous expedition. (Sound familiar?) As you already guessed it’s only a matter of minutes before they stumble upon the worm-infested remains of the previous expeditions guide, and from out of nowhere, natives’ blow poisonous darts at them. Romero shows his diabolic character when he instead of assisting the soldier shot by a poisonous dart, calmly shoots him in the head – spattering the rest of the soldiers with his brain substance – whist delivering the cold line that there’s no cure for the poison, he merely put the soldier out of his misery.

Upon reaching the village they start spotting items of modern civilization upon the natives, which indicates that they are getting close to their destination, as these items are belongings of the former expedition. A peculiarity familiar trading of modern technology for further directions deeper into the jungle takes place. It’s amazing how much one can get in return for a flick knife these days. 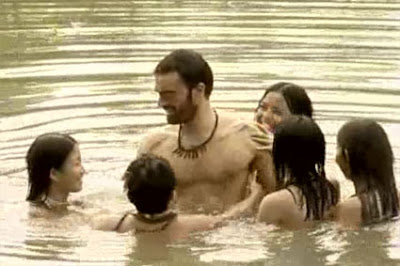 The closer they get, the more carnage they find – one pretty neat skinned corpses hanging from the trees makes it all worth while – Gianni Paolucchi (who worked with Mattei in various positions since the eighties, and more importantly produced, and sometimes co-wrote almost all of Mattei’s films during Mattei’s last active decade.)… Anyway, Paolucchi and Mattei wind it up effectively as the group get closer to their destination. Appalled by the native ways, but also solving the struggle between the native tribe and their nemesis tribe who kidnap and rape their women, they slowly gain the trust of the tribe…. 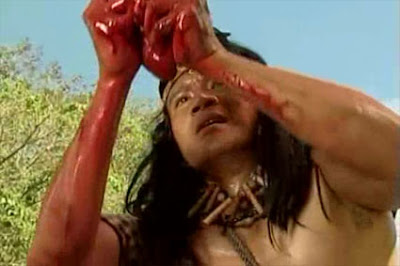 Exposition is always delivered by Romero who amusingly enough always seems to know everything about the natives rituals and habits, and get’s the chance to explain what the hell is going on at every encounter with them. It’s also quite funny that the more the commandos learn about the natives, the more they become infuriated with them, wanting to mount up and blast them away. Luckily they are told by Romero to calm down and lower the guns they have aimed at the cannibals. Yeah, seriously it happens a dozen times and even after they have gained the tribes trust and find Colonel Armstrong’s daughter. If the Philippine actors are stereotypical Italian Cannibals, the soldiers are a scary reflection of US army stereotypes. Gun crazy, trigger-happy stereotypes. 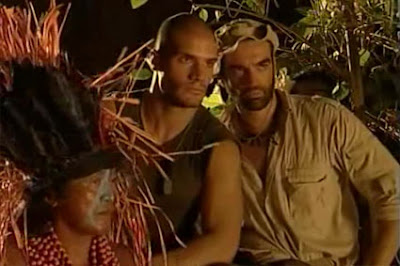 Long time teammate Luigi Ciccarese’s cinematography gets the job done, and the actors do what they can with what one only can imagine be minimal direction from Mattei, Most of the actors from these later films only ever did one or two films before slipping back off the radar. But who’s to complain, as this more or less gave a few lucky actors the chance to star in a “real” movie. (If you still haven’t seen Best Worst Movie 2009, about the legacy of former Mattei collaborator Claudio Fragasso’s Troll2 1990, you should stop everything right now and check it out. It’s a brilliant documentary) 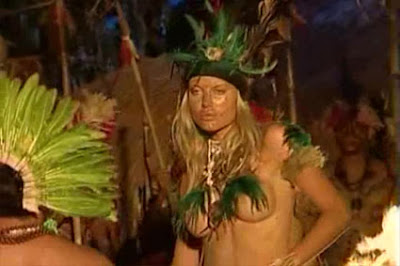 I mentioned enthusiasm earlier on, and I seriously think that anyone watching these films and not picking up on the enthusiasm – after all Mattei and production company La Perla Nera crossed paths on many occasions during the last decade of his career indicating that Mattei eagerly wanted to make these films – are missing the ever so important ingredient that separates Mattei from many others. How many times have you checked out favourite genre filmmakers latest flick (or later productions) only to find it running on fumes with no passion at all. If not for the look of the direct to video productions, I honestly don’t see much difference in the late and early films of Bruno Mattei. No matter if it looks cheesy and cheap or rough and raw, I have the feeling that it was all film to him, and his level of engagement was constant throughout his creative lifetime. Just watch stuff like Snuff killer – La morte in diretta 2003,  L’isola dei morti viventi 2006, Zombi: la creazione 2007, and then compare them to Virus – l’inferno dei morti viventi 1980, Notte di terrore 1984 or even L’altro inferno 1981 and you will note that the only thing that really separates them is the quality of filming technology. Story and content wise they are all Bruno Mattei. 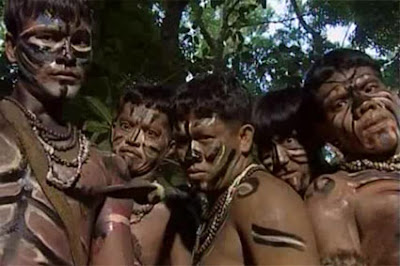 Nailing safe beats every five-six minutes with gore, death or gut-munching, mid point comes with the reveal that the General Armstrong’s daughter Sara [Cindy Lelic Matic, who reunited with Mattei on his next jungle cannibal movie, Cannibal World 2004] is in fact the white queen of the cannibal tribe, and a feisty one to say the least, with no intention at all to return to the decadent civilization of mankind. Snatching her from the tribe, they unleash the wrath of the Cannibals and from her on out it’s all about staying one step ahead of the many tribes they have angered on their path through the jungle and the ipacha tribe who definitely want their White Queen back. 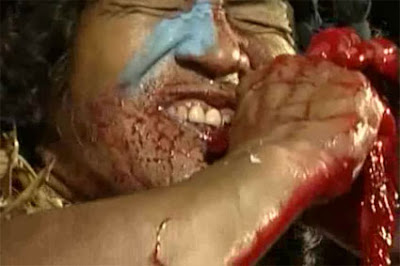 Showing his talent for ripping off other films, Mattei literally uses everything he can imagine and freely borrows a multitude moments that you undoubtedly will recognize from previous cannibal film of the eighties, Deodato, Martino, Lenzi, and why not Franco while he’s at it. But it’s all done in a classic Bruno Mattei fashion, and I wouldn’t want it in any other way. Anyone else and I’d probably have lost interest, but with Mattei it’s a vital trait and half the fun of his films. 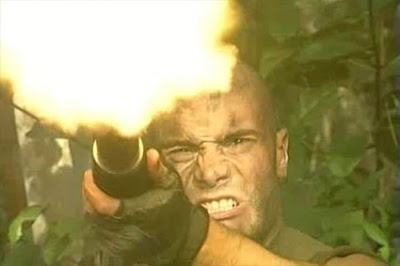 All in all, Land of Death is a pretty straight forward action/cannibal flick that uses something of an action plot before turning into something of a testing plot if I where to apply Norman Friedman’s forms of Plot on the film – probably a first time application and mention together with a Bruno Mattei film. Put in other words, first they search and we follow them on their action filled problem solving then the run for their lives as we watch the strong characters is responsible for their own fate. We also learn that arrogance and hostility will never end with success – basically the theme of all cannibal flicks. Norman Friedman’s plot structures are obviously something that Mattei and Paolucchi never gave a single minute of though about, but something that almost all filmmakers subconsciously know and use in their films, even if its only a cheap piece of Cannibal Exploitation.

I never got around to the later Mattei stuff... but this review makes me want to.

You should Kev D. It may look like hell, but it's Mattei all the way, and I love that he just kept on making his cheap exploitation films as if nothing ever changed.