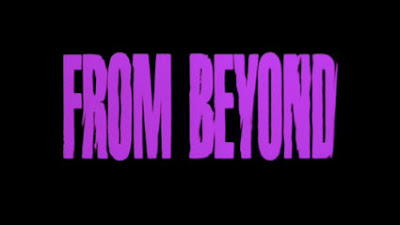 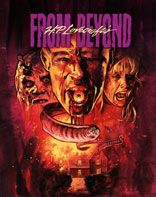 Every movie reviewer has his or her genesis story. The initial films they started a repetitive viewing of, their portal into obsessive fandom. The first time I was swept up by the magic of Stuart Gordon’s From Beyond was back in the late eighties, when my mate Fredrik - through a quick exchange of a couple of hundred kronor - obtained a bunch of VHS dupes from this guy at or school who had an infamous Xeroxed list of genre films he’d sell bootleg copies of. The school genre fare pusher man one could call him. One of those tapes was Stuart Gordon’s From Beyond, and a continious dedication to the works of Gordon was firmly rooted from that moment on. 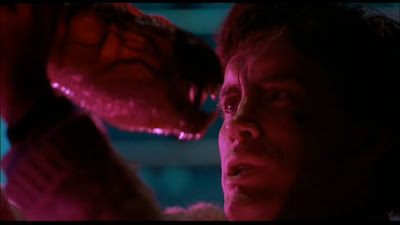 The story of From Beyond is classic horror fare, the exploration of the unknown. Crawford Tillinghast [Jeffrey Combs], Dr. Katherine McMichaels [Barbara Crampton] and Bubba Brownlee [Ken Foree] find themselves confronting creatures from another realm when they conduct experiments on the late Dr. Edward Pretorius machine that stimulates the pineal gland with its high resonance. From the other realm the creatures start slipping into ours, and pretty soon the late Dr. Pretorius [Ted Sorel] himself steps out of the pulsating lights unleashing an entourage of slimy creatures and hideously gory moments in his path. 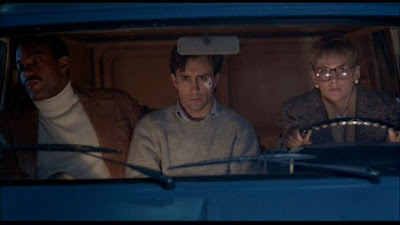 So let’s talk From Beyond and ask the questions if it has stood the test of time? Well hell yeah, it’s still a great movie and I’d even go as far as naming it the best of the Stuart Gordon Lovecraft adaptations.  Lacking the dark comedic elements of Re-Animator, From Beyond delivers a more sinister and darker tone, which suits Lovecraft stories much better than the comedic horror of Re-Animator. (Which still is a blast of a film too.) 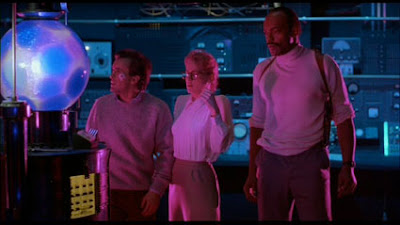 Starting off with an initial attack that definitely sets the Lovecraftian tone – as nothing is really shown, merely indicated and suggested through dialogue where Tillinghast tells of the monster that ate Dr. Pretorius head – the movie moves effectively into its post credit sequence narrative. With Combs Crawford Tillinghast character established and the mysterious Dr. Edward Pretorius seen briefly, it’s time to add the second lead character Dr. Katherine McMichaels. Frequent Gordon “heroine” Barbara Crampton is gorgeous as McMichaels, but perhaps even more important to the story is that she is introduced as the sceptic of the piece. Tillinghast is merely dismissed as insane and guilty of murdering Dr. Pretorius, the story he tells - of entities from another realm - is frowned upon as the ramblings of a mad man and he's facing being life behind bars following his evaluation at Miskatonic Hospital. It's when sceptic Dr. McMichaels passion for science and hard facts gets the better of her, making her want to take Tillinghast back to the mansion to check up on his story that the movie starts to change the characters. The Miskatonic Hospital is also where a small subplot with Dr. Bloch [wife of Stuart Gordon, Carolyn Purdy-Gordon] is introduced. The film returns to the location for it's third act and also some of the movies great gore sequences. She’s something of a nemesis to Dr. McMichaels and finds her methods of conduct to be highly controversial and unethical. Dr. Bloch is more of an old-school electroshock therapy kinda gal. 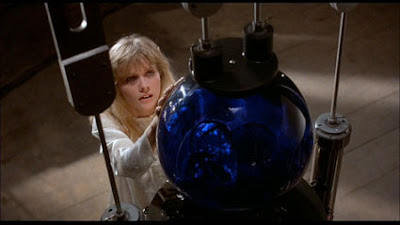 With the plan of taking Tillinghast, back to the mansion on the hill there’s the chance that they either discover that he is a murderer or that there might be some truth to his story.  Private investigator Bubba [Foree] tags along for security, and turns out to be more of a comic relief than anything else. BLinded by possibilities it only takes moments before her scientific curiosity draws Dr McMichaels towards the machine and the gateway to other realms. The enthrallment of possibly standing on the threshold of the greatest medical discovery of all time, lures McMichaels in and even knowing that there could be serious consequences, she hits the switches and brings forth the creatures from the beyond. It’s her greed that motivates her, the same greed that transforms her character from sceptic to believer, from passive to aggressive and also the same greed that leads her right into insanity. 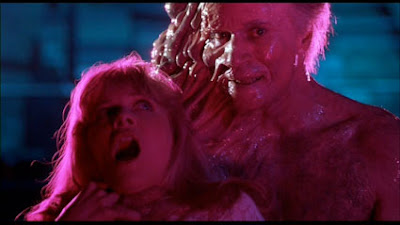 It stands clear at the end of the movie that From Beyond really is an underrated piece of eighties gold. It simply oozes the traits that made Lovecraft’s novels such a thrill. Sparse on explanatory mumbo jumbo, plenty of slimy ancient ones drastic transformations of character roles, and the ever dormant insanity which where all a fundamental characteristics of Lovecraft’s works.

As for the characters in the movie, they are fantastic. The transitions from polarized sides of the axis are great. Crampton's Dr. McMichaels also goes through a full transition from the stiff restrained woman of science to full fledge sex maniac on the fringe of insanity. This makes characters so much more intriguing and filled with dimension than the regular mad scientist of say Re-Animator. 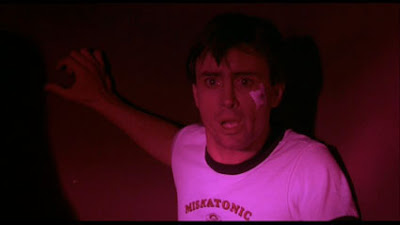 Combs knocks it out of the park with the portrayal of Tillinghast, Dr. Pretorius assistant, who at first has nothing but awe and respect for his master, but as the movie plays through, transforms into knowing the truth and finds that he actually hates and despises Pretorius. His characters role as the victim and his presumed insanity make him vulnerable and easy to empathise with.  There’s also a great use of guilt to fuel his transition, as the respect for his former master slowly wares away and turns into the hatred and repulsion he really held for Pretorius. This is due to the guilt he had over never questioning or opposing the cruel sexual games that the impotent Dr. Pretorius played out in his torture chamber. It’s the guilt of all these suffering women that he could have saved.  Note that even the impotent Dr. Pretorius has a transformation arc as he’s everything but impotent when he returns in his beast shape. 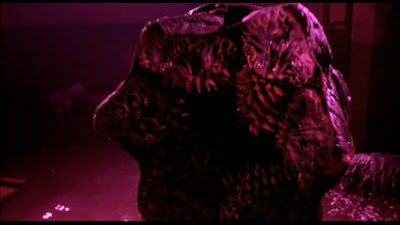 Special effects are brilliant; it shows that some of the great FX people of the era; John Carl Buechler, Mark Shostrom, Henenlotter regular Gabe Bartalos, Greg Johnson and a young Robert Kurtzman. The creatures look superb despite the high def – which usually is one of the areas where old-school FX can come off looking rather poor and revealed as only being effects. Swedish cinematographer Mac Ahlberg – who sadly passed away last year – works his camera magic, and this kind of work always shows what a great artist he was, not to forget the passion he held for his craft. 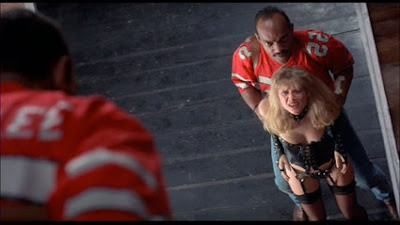 Gordon, with stable actors Crampton and Combs would all reunite a yet again with their third Lovecraftian tale on Castle Freak. Gordon himself teamed up once more with Brian Yuzna during his time in Spain under Julio Fernández Filmax, for Dagon before tapping into his, to date, last Lovecraftian adaptation with Dreams in the Witch House as part of Mick Garris Masters of Horror TV-series. 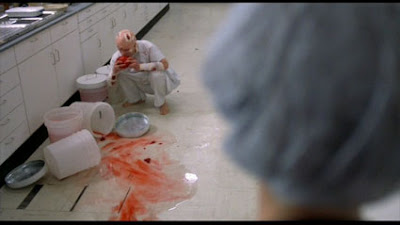 I couldn’t really discuss From Beyond without mentioning screenwriter Dennis Paoli, who wrote the scripts to all of Stuart Gordon’s Lovecraft adaptations. What he does with the characters is perhaps one of the key reasons why Gordon’s Lovecraft films resonate louder than other attempts to adapt the ancient ones and unseen horrors for big screen entertainment. The characters have advanced journeys, developing character arcs and frequently end up polarized positions from where they started. Dennis Paoli is undoubtedly one of the best screenwriters of horror film scripts, and where it would be easy to call it a shame that his talents have been so sparsely used, it may very well also be this simple fact that makes his work stand out so much more than others. 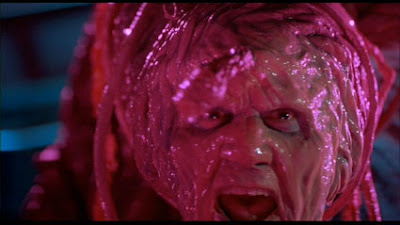 The Second Sight BluRay is an outstanding release, with an astonishingly crisp image, vibrant colours and an impeccable print. Much like their releases of Return of the Living Dead and the Basket Case Trilogy, this is a must have release, and Second Sight add yet another solid brick to the foundation of being the best distributor of fine cult fare in the UK. It wouldn’t be a Second Sight "must have" if it wasn’t filled with those customary extras one has come to expect, so how about a Q & A with Gordon about From Beyond, new interviews with Barbara Crampton, composer Richard Band, and screenwriter Dennis Paoli. Featurettes on the Special Effects of From Beyond, Lost and Found footage from the editing room, and a great commentary track with Gordon, Yuzna and Combs, and the reason that makes these films pop out amongst the rest,  spiffy new artwork by the legendary Graham Humphreys. 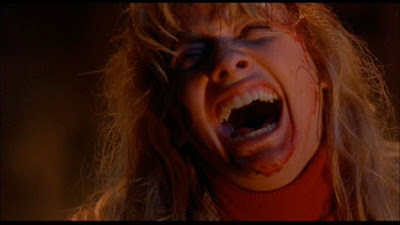 Make room on your shelves for Second Sight’s Limited Edition BluRay Steel book release of From Beyond, out in UK on the 25th of February.