This Night I'll Possess Your Corpse 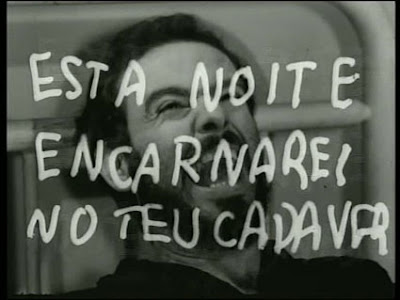 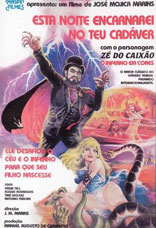 This Night I’ll Possess Your Corpse

Anything can happen in movies. Dead characters can magically be alive in sequels, it happens all the time. What we throught was one absolute ending, is twisted to something else and hey presto, the beast is back! So why not Coffin Joe! Opening with his trademark philosophical questioning - the one that proclaims his philosophy and goal -  This Night I’ll Possess Your Corpse jumps right in where At Midnight I’ll Take Your Soul ends, recapping that story and giving more details about the last moments of the previous film, before quickly taking us through credits, blitzing images of nightmarish scenes to come - and bringing us up to speed - Zé do Caixão is hospitalized, sent to trial, freed of all charges and regains his eyesight. Blam! Now we’re ready to roll again. 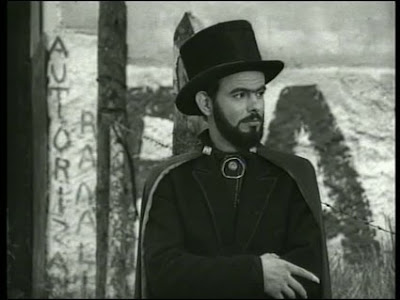 Zé do Caixão is still on the prowl for a woman fit enough to bare him a son and keep his blood line running, but this time around he’s got a reputation to stand up to. Fellow villages run in fear as he walks back into town, people are aware of him and keep their distance, and even question him being in their village. 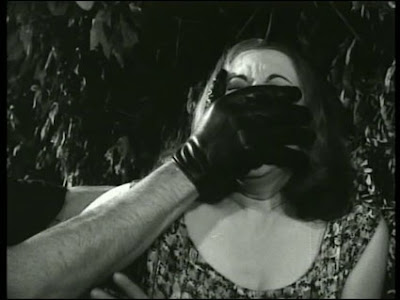 A series of stylish off-screen gloved predator kidnapping several young women rallies up the villagers who rush straight to Zé do Caixão and confront him… Oh yeah, his powers of persuasion are just as sharp as ever and he smooth talks his way out of a heated situation. The punch being in the reveal that all women actually are victims of Zé do Caixão. He’s abducted them to be part of his selection of possible brides to be. After locking them in a room, offers them gold and fortune, but later that night he releases an ocean of deadly spiders into the room to single out the best options. As the night gowned women sleep, the arachnids crawl all over their bodies until panic sets in. As they scream Zé do Caixão opens the door laughs sinisterly and tells them that his rest to measure their courage is now over. Losers are taken to his underground laboratory and given to Bruno the Hunchback [Jose Lobo] as an early birthday present… another example of Zé do Caixão giving to the less fortunate. 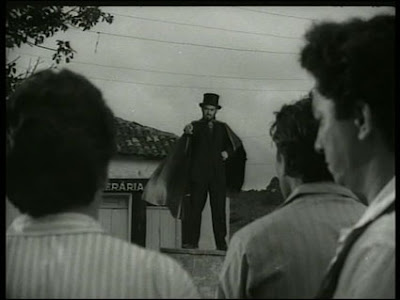 The main narrative of This Night I’ll Possess Your Soul is still Zé do Caixão searching for his bride to be and doing so through groups of women he puts through a series of merciless tests along the way – like love making whilst listening to the death cries of the loosing women trapped in a pit of venomous snakes. It’s like a dating show for sadists! 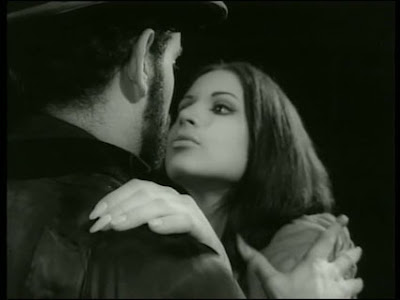 Villagers hardly dare stand up against him, and even the rural law enforcer Colonel is powerless in the presence of Zé do Caixão. Standing feebly, the Colonel can only watch as Zé do Caixão sets his sights for his daughter Laura [Tina Wohlers]. Laura doesn’t waste her time to acknowledge the caped, top hat bearing Caixão, but shows her own true colours as an evil selfish woman with no scruples at all – who even ignores going to her own brothers funeral, with the knowledge that he killed her brother, so that she can stay in a snog Zé do Caixão. Undoubtedly a woman in his taste! It’s during these scenes that Marins once again deliberately provokes by crosscutting his seduction of Laura, undressing her and making love in the cemetery with the funeral of her brother. 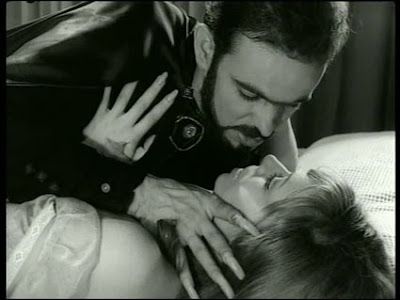 I find it fitting at this point to remind you that this sinister, egocentric maniac who was once tried for murder of several people with nothing in his mind but securing his own bloodline, still acts on behalf of others! Early on in the movie a motorcyclist races down the dirt road towards a bunch of children playing blind mans buff. Only thanks to Zé do Caixão does the child seeming to face certain death survive as he courageously throws himself out into the road shoving the young boy out of dangers path. This gives such a great dimension to the character that never is commented on, he can easily abuse and murder innocent people for his means, but he won’t let anyone harm a child. Just like in the original this comes back to bite him in the ass, and is a vital reason for his descent into madness this time too. 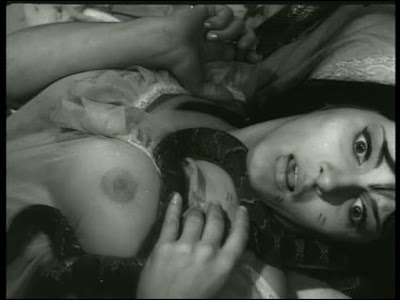 Zé do Caixão a very typical anti-hero in every way. An outsider, a vigilante, a lone wolf – but all good things come to an end, and in the sixties “villains” where certainly not getting away with their crimes on screen. The great irony of Zé do Caixão and his desire to keep his bloodline alive is that unbeknownst to him one of the women he murdered in his first tests of the kidnapped women was pregnant. With the realization that he disrupted another man’s bloodline and that he killed a child – remember he’s very protective of children – his world comes crashing down around him once again. It’s in this distressed state of mind that he starts to suffer from nightmarish hallucinations as his guilt starts to drive him insane. 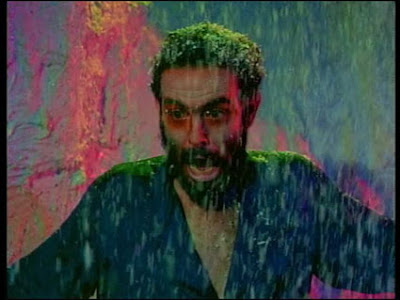 When the skinny shadow man comes to drag him to hell don’t freak out, your acid hasn’t taken you on a bad trip, and the movie does become a colour film for a short while. This is a stroke of genius, as visions of hell on cinema should stand out. Raging from Benjamin Christiansen’s Häxan 1922, through Nobou Nakagawa’s Jigoku and even Olaf Ittenbach’s No Reason 2010, trips to hell are always terrifying experiences, and if one can show the horror in colour the better it is. Marins goes crazy with lighting, effects and sets as Zé do Caixão wanders through corridors of pain, suffering and torture before he has the most shocking reveal of his life! 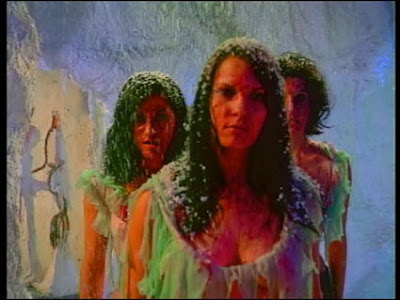 It’s through empathetic recognition that we feel for this delightful antihero, and what is kind of startling with This Night I’ll Possess Your Corpse is that for a while it looks as if Zé do Caixão is going to succeed with his plan… although some harrowing decisions are to be made before he’s forced into the darkness all alone once again, and challenge God to prove his existence!

With better financing this time around Marins had the chance to dig in deeper and paint with a broader brush. Characters are more extreme than the original; the rouges gallery is a wider span – disfigured villagers, Bruno the Hunchback, more women, more nudity, and more extreme violence. More on that and how it ended up putting a break on Marins vision for the second instalment. 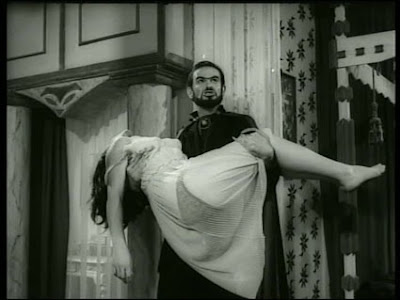 There’s also a shift in pacing this time around, Zé do Caixão isn’t quite as frenetic as he was in the first movie. He’s certainly as eccentric and megalomaniac as ever, he’s still an atheist devout to his existential approach to life, but now he’s more certain of his goals and ambition. Instead of a raving lunatic, he comes off as the disdainful and suave character that certainly will stop at nothing to reach his goal. 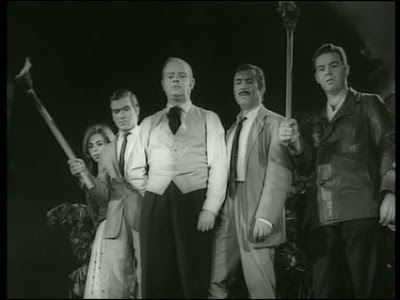 There’s some great irony within the piece, such him being an atheist and then confronted with the visions of Hell, or even the use of the Hallelujah chorus from Handel’s Messiah Part 2, when learning Laura is pregnant, remember he’s an atheist and an Existentialist right! This irony may not be intentions, but there’s a reason why it becomes ironic when it’s used in this Existentialist piece. I find a similarity to stuff like Milan Kundera’s existentialist work The Unbearable Lightness of Being – a movie that scared me, and definitely shaped my view on life when I saw it back in the eighties. The theory that Kundera relied on in this piece was that of Eternal Return. One of Nietzsche's pet peeves which suggests that the universe is recurrent and will continue to be so for all eternity. It’s within this recurrent eternity that man must chose wisely. Because when one accepts that there is no God each man and woman must rely on themselves for all their decisions, which gives them freedom of choice. Existence is an individual thing and one has total freedom. I also see it as further reason why the three films all work in similar ways, leading to similar climaxes. This is what Zé do Caixão has, and this is how he lives as he considers his choices to be his own path to freedom. As pointed out in the piece on At Midnight I’ll take your Soul, this is why Zé do Caixão’s world is shattered when he’s taken to hell and shown that there is a Devil, and with a Devil comes a God… Considering that Marins aimed for a much more nihilistic ending to the film – one where Zé do Caixão doesn’t die in the swamp, but instead throws the priests crucifix at the mob and laughs at their religion, staying true to his Existentialism - the movie ends in a much more odd way where the Existentialist views are discarded. Although this was certainly not Marins decision, and I’ll return to that in a short while.

Despite being more or less a pimped version of his original film, I’d like to point out that newcomers shouldn’t take shortcuts and jump in at the second piece. This is a series that evolves and the character develops in certain ways along the way. Do yourselves a favour and start at the beginning. 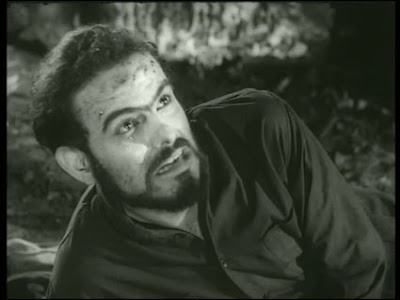 Unlike many other sequels, Marins pulls a five-fingered punch with This Night I’ll Possess Your Corpse, as it’s everything that At Midnight I’ll Take Your Soul was intended to be, but amplified beyond that initial film. More nudity, an even more sinister Zé do Caixão, bigger sets, better effects and a confused sudden conversion to believing in God at the last moment. At the time Marins started making his Coffin Joe Films in the mid sixties they where films that for the time where extremely graphic and provocative. Something that came back and bit him hard in the ass when the dictatorships censors forced him make several cuts to the film and tag on the religious finale. Tough deal, but when the Dictatorship tells you to change your film or loose it for all eternity, Marins had no other option than to alter the film to their tastes. It still makes a great movie despite Marins still feeling that the censors killed his film. Perhaps this is why Marins only used Zé do Caixão as a cicero and guide through many of his films to come, there’s no point unleashing the beast if he cant be used to his full potential. Something Marins would make sure happen with The Embodiment of Evil more than forty years later. This time Zé do Caixão would be back in every possible way!