I really enjoyed Chris Alexander's BLOOD FOR IRINA, so news of this second collaboration between Alexander and Autonomy Pictures comes as great news!

My review of Blood for Irina is here. 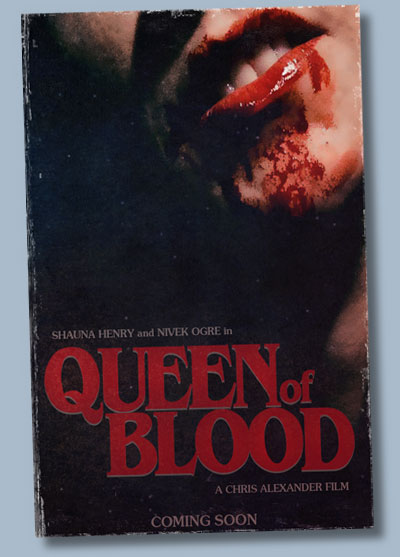 Following the critical and festival success of multiple-award winning experimental horror film BLOOD FOR IRINA, Autonomy Pictures is proud to announce they will be producing Chris Alexander’s next project, QUEEN OF BLOOD. The new film will further deconstruct the vampire myth created in IRINA and will continue Alexander’s filmmaking style of blending mood, startling imagery and original music all drenched in a sea of deep red blood. The film is currently in pre-production and will be released in Spring 2014.

"With my first film, which was an education in filmmaking, I created an unconventional, mood piece tackling themes such as death, birth, redemption, addiction and loneliness,” says director Chris Alexander.  “With QUEEN OF BLOOD, I will continue to expand on those themes and fuse them into a Horror/Western hybrid which will make it a darker, stranger and visceral film experience. I’m excited that I’m working with Autonomy Pictures again as they give me complete creative freedom to bring my vision to life."

The film will also star horror art/music pioneer and Skinny Puppy frontman Nivek Ogre with additional cast members announced soon.  QUEEN OF BLOOD is written by Chris Alexander, Editor-in-Chief of FANGORIA, who will also direct and compose the film’s score. Costume design will be handled by Toronto-based artist Alex Kavanagh, who has designed costumes for multiple films including the SAW franchise (including parts of the elaborate death traps), REPO! THE GENETIC OPERA and LAND OF THE DEAD.

BLOOD FOR IRINA is now on Blu-ray from Autonomy Pictures.  Order your copy now at Amazon.
- August 29, 2013