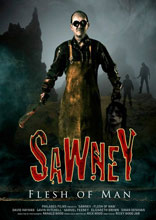 500 years ago a cannibalistic clan roamed the Scottish highlands. Dwelling deep underground they where said to have slain and eaten over 1000 victims until they where all rounded up and put to death, all but one...

Ricky Wood Jnr. opens his first feature film with ye Olde based on true story gimmick before cutting to 1990 and a cold winter Highlands, where a first of two initial attacks establish that there’s still some monstrosity roaming the hills. The first is an off screen birth of what we can understand to be a monster baby and then the poor bloke who was driven all that distance from the city out into the back end of nowhere has his head blown off. Cut to cheesy metal ban at Halloween party… Charlotte walks out on her druggy boyfriend and walks home all alone in the wee hours of the morning… a black cab arrives… get’s in, it rocks, she screams – cut to funeral.

Two somewhat unclear initial attacks to establish the “antagonists of the film” may be confusing, but all makes sense as the film splatters itself into the last act in about an hour’s time. It also creates a rather curious line of questions of who the real antagonist of the piece is…

Bring on regional crime journo Hamish MacDonald [Samuel Feeney] who’s written and gone to print with a piece on the macabre murder, mutilation and ritualistic arrangement of Charlottes body when it was found by the police a few days after her death… Police inspector Bill Munro [Gavin Mitchel] grows sick of MacDonald’s slanderous articles published in The Scottish Chronicle approaches MacDonald with some grim facts that nobody but the police knew and Hamish is sent off on a wild chance to expose a secret that has been hidden in the highlands for decades. Hamish search takes him into the belly of the beast where he comes face to face with Sawney [David Hayman], the offspring of the legendary cannibal family!

Just as so many other genre flicks get their kicks from vague connection to authenticity so does Sawney : Flesh of Man. Although in this case the backstory is as far back as the 15th century and the stories of clan leader Alexander Sawney Bean, a legendary character who, with his almost fifty men and women large clan, roamed the area of Ballantrae for almost a quarter of a century, robbing, murdering and eating their unfortunate victims. It’s told that they killed over a thousand people and that even King James IV took part in the 400 people manhunt that took place to track the clan down before bringing them to justice. Heavy shit and a great source for a horror film!

Sawney : Flesh of Man uses something of a classic investigation plot to tell its tale, although it kind of backfires as we already know who and what is responsible for the violent deeds… or at least so we think. There are some effective surprise twists hidden along the way that manage to make the last act pick up and make this a pretty neat horror thriller

On the down side, a really silly fight scene where two of the mutant monsters act out a series of choreographed martial arts moves totally punctured any kind of atmosphere that the film had built up to this point.

At the end of the day, David Hayman’s grand performance as the sinister Sawney Bean is what leaves the best impression; dark, quirky, disturbing and fun. Think Texas Chainsaw Massacre, think The Hills have Eyes, think snoopy investigator on random TV show and you have Sawney : Flesh of Man, a badass thriller with a bloodlust that goes way off the scale. With its impressive,  highly graphic effects and loads of sickening gore that will offend sensitive viewers, Sawney : Flesh of Man is most certainly Blood and Guts in the Scottish Highlands!