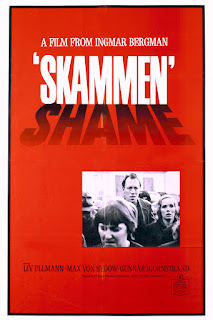 Growing up in the eighties as part of the Douglas Copeland coined term, Generation X, you know that he hit something right on the head when he wrote that passage describing a generation of kids fearing each sudden bright burst of light and every shrilling siren drill as The End, as they instinctively died with the fearful knowledge that it was the sign of the Cold War Atomic Bomb apocalypse galloping in. That’s a difficult fear to explain to generations further on down the line where we find a cynic generation of kids raised on screaming YouTube superstars, revenge porn on Instagram and live suicide, streaming on Facebook …

But it certainly seems like we’re back there again knocking on the door of the apocalypse, and there’s an obvious reason that stuff that I guess we could best label “anti-nostalgia horror”, (because there’s no warm feelings about them at all), are popping up on the radar again. Specifically, trauma inducing television fare that we all saw, because every bloody country lived in the same fear and screened these damned things to keep us scared shitless. Suff like Nicholas Meyers 1983 TV movie The Day After followed by 1984 BBC television drama Threads (just released on Bluray by Severin films), one of the most harrowing and realistic UK TV movies to ever portray life after the big bomb. And I remember that bastard thing and there was another one that was in serial format which saw the few survivors roaming the moors in images that looked like the places I grew up roaming… Traumatizing is the word, that terrifying sensation when you can emotionally relate to the horror on screen, and it’s not make-believe monsters, but a scenario that could become real at any time!

With all that set up I’d like to point your attention at the movie in focus here today. Ingmar Bergman’s Shame, (Skammen) from 1968, his final black and white movie (The Rite was for TV). Now this idea of mine of watching Bergman as horror might come off as far-fetched, but it certainly isn’t. I’ve been pondering this for so many years that when I watch these films I see it clear as day right in front of me on the screen.

I say that Bergman IS horror, after all the definition of Horror as described by the Cambridge English Dictionary is “an extremely strong feeling of fear and shock, or the frightening and shocking character of something”, of which you’ll find elements of in almost of his work. 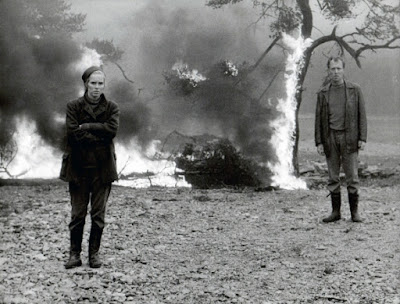 The Hour of the Wolf was a no-brainer, it’s visuals of horror shock and fever dream images are undoubtedly fear inducing material, but let’s get down to real horror. Horror so real that you can feel it fucking punching you from the dark shadows of the screen, which is how I experienced The Shame. The pending doom of annihilation.

The Shame tells the tale of a couple, Jan and Eva Rosenberg (Sydow and Ullman), who just like Johan and Alma in The Hour of the Wolf have isolated themselves on an island. Or so we’re led to believe. They lead their smalltime life of self-sufficiency with small gardens and chickens. They are in the midst of life and like most of Bergman’s couples have indifferences in the relationship that surface and cause conflict between the two. But the real trouble starts when the peace and quiet is shattered by an invasion. The war has been closing in on the small island. Their friends are drafted, to fight an unwinnable war. And then finally one night it hits an airstrike, complete with paratroopers who get stuck in the trees. 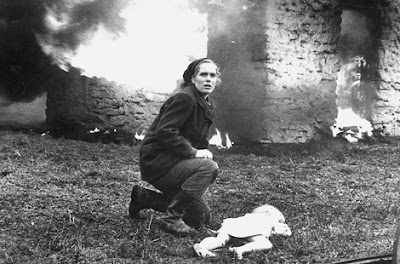 Horror stomps in in the shape of the invasion, death (animals lay dead in their pasture), destruction and the enemy army, who harass the couple fording them to make statements (that later will be faked to pro-invader propaganda). The leader of the invading/opposing army is former town mayor Colonel Jacobi (Gunnar Björnstrand) who helps them off the hook with the unspoken but obvious favor of being intimate with Eva something he continues misusing after the occupation.

Another area that one should really look into when it comes to Bergman is the real of Eros and Thanatos as Shame really wanders the fine line between life and death. The first scene is of nudity, and the final scene is of death. It’s also in the relationship between Eva and Jan and the way they discuss a possible child or not. Life and death. And there’s Jaccobi who clearly feeds off the sexual occupation of Eva, the conquest of his power, but in the end, it’s the same sex, his abuse of power versus the frustration and hate that the pendulum movement have created that sees him defeated. 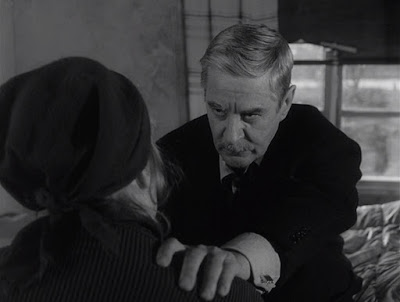 But perhaps the most disturbing thing with Shame is the emotional recognition of the powerlessness that Jan and Eva end up in, and the understanding of the terrible acts they do, are acts primarily done to survive. And the price is a high one to pay at the atrocious and terribly bleak finale. A bleakness that is horrifically close to the reality of today as Jan and Eva push their boat over the corpses of drowned misfortunate refugees in the cold waters of the sea they are escaping over. This movie is unlike something like Hour of the Wolf with it’s horror fantastic, a harrowing piece of horror realism, and that’s why it’s more disturbing than most of Bergman’s straight forays into horror themed film, as horror in reality will always be more terrifying than fantastic horror which we primarily use for escapism.