The Hour of the Wolf 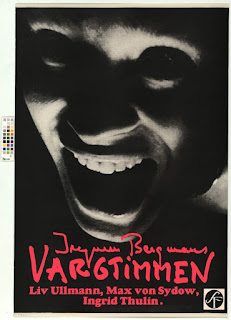 The first time I watched Vargtimmen, or Hour of the Wolf, it was as if lightning struck. That’s where the seed to me thinking of Bergman as horror was born. Yes, obviously because it’s considered his horror film, but also because he mastered the emotions, atmosphere and visuals of that genre so elegantly.

This is my third re-watch of Vargtimmen, and with the fresh read of the short story (which was part of the course I’m on), the movie doesn’t gain any extra points. It builds brilliantly and it has that fanatic crescendo ending with the faux necrophilia and fuckery with the human psyche. Johan (Max Von Sydow), an artist and his pregnant wife Alma (Liv Ullman) spend the summer on a small remote island. Soon the idea of an idyllic summer becomes something completely different as Johan starts acting strange – that Bergmaninan theme of psychosis. The first half of the piece is more or less about establishing characters, the second a nightmarish fever-dream that could challenge many Gothic horrors when it comes to creepy visuals and themes. Seriously. It does. I watched Black Sunday just a few nights ago, and at times the images and atmos are very similar.

I'm not going to get into any form of analysis, I'm quite sure viewers will all find different things and meanings in this film but I will mention GUILT! Bergman uses guilt like a magician in Hour of the Wolf, because like I said, this is horror of the human psyche, Johan has a lot of things in his life that he feels guilty for. Dark things that are tormenting him profoundly. Tormenting him to such an extent that he looses his mind and goes bat shit bonkers. Hence the reason for Bergman finally, and I mean FINALLY showing us his visions of insanity. Unlike the films where we’ve head about the void, the spider-god and other terrors that torment his characters, The Hour of the Wolf takes us there… because he’s set up the rules for this specific film.  "The hour between night and dawn. The hour when most people die, when sleep is deepest, when nightmares are most real. It is the hour when the sleepless are haunted by their deepest fears, when ghosts and demons are most powerful, the hour of the wolf is also the hour when most children are born." 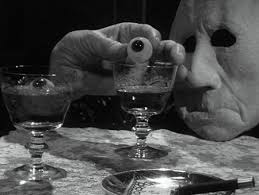 There's a scene early on where Johan shows his secret sketches to Alma. We never see them but the way Johan describes the terrifying beings he's sketched, it's clear that he's been observing something terrible. It’s a classic moment of tell don’t show, the best way to fill the viewers mind with images way better than anything a special effects studio could come up with. Perhaps it doesn’t really pay off in the film, but does oh so mindboggling in the novel. Bergman would use this kind of approach in several other works, amongst them Persona when Alma (Bibi Andersson) tells Elisabeth (Liv Ullman) of shocking sexual adventures she’s had…

But what differs the two is that the novel is really a damned straight up horror story complete with equivoque descriptions and Lovecraftian “vague enough to put images in your head descriptions” of monsters and the deadly void. (Seriously I’d highly recommend reading the short, it’s only a few pages and would take you like half an hour or summat.)

The last half of the film is horror and boy are horror themes used. Murder, ghosts and even a flirt with necrophilia – as Ingrid Thulin lies naked upon a table top. Bergman pulls the old "based on true events" trick as this one starts, making us believe that the story is of the night when Johan Borg suddenly went missing one night as noted in his diaries, and his wife Alma's retelling of the events to Bergman. It’s basically the same way Texas Chainsaw opens… 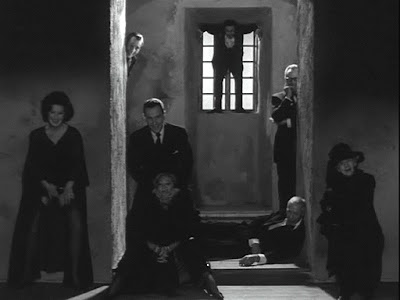 A couple of meta references are here, there’s more of them than you’d expect in someone like Bergman’s work) and I’m starting to spot them frequently In his stuff. First off during the opening credits, carpentry and set-building can be heard. All of this ends when Bergman is heard shouting, Silence! Action! And the movie starts. Secondly the music from The Magic Flute. Music that was of deep importance to Bergman. During the night at Baron Von Merken's (Erland Josephson) castle they watch a rendition of Mozart's The Magic Flute. A few years later Bergman would direct his award winning and academy award nominated version. Thirdly, Bach's Partita, which he uses in The Hour of the Wolf and also used in Shame (Skammen) and The Passion of Anna (En Passion) the two films that followed Hour of the Wolf. All three films are commonly referred to as the Angst trilogy. One of the subtler ones is the doodling on Johan's diary, it's a chessboard. A referent to The Seventh Seal (Det Sjunde Inseglet).

Hour of the Wolf, weird, dark and definitely one of Bergman's movies that gets the closest to the horror genre. A definitive recommendation if you like your horror suggestive, surreal and downbeat.