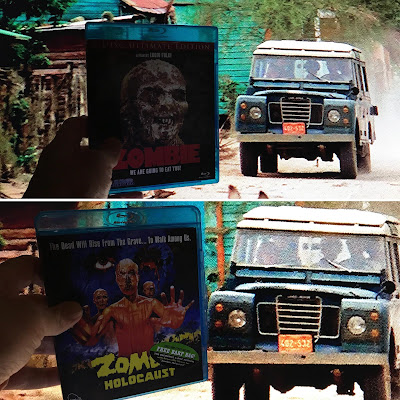 1979 Meistro Lucio Fulci travels to the Caribbean to shot parts of what will become the epic Zombie 2. Scenes of the cast (Ian McCulloch, Tisa Farrow, Richard Johnsson, Al Cliver and Auretta Gay) land roving around the island in a 1979 Series III 109 Land Rover Station Wagon are taken along with the last the climactic exteriors of the gang running around both indoors and outdoors before burning the make shift church/hospital to the ground.

But the following year someone sneaks back and does it all again, and not even with an entirely new cast. Ian McCulloch and Dakar both return to the scene of the crime for more undead fun both in the caribbean and back in the studios in Italy. The culprit, or perhaps genius here, isn't director Marino Girolami, but producer Fabrizio De Angelis who realizes that the zombie craze isn't quite over yet. Mixing part cannibal flick and part zombie flick he quickly reuses parts of the sets and locations of Fulci's Zombie 2 for his new flick Zombie Holocaust. And why the hell not, after all he's the producer of both movies, and a bloody good bunch of the stable of trash we refer to as Italian genre classics.

So back to modern day and the tenacious stories that where ok twenty-five years ago when we only knew shit our mates told us, print info dudes wrote in fanzines and the few books that gave a damn about cheap genre fare. And this time it's the one where people keep repeating that Zombie Holocaust uses a load of footage from Fulci's Zombie 2. Really people, it's not much harder that just watching the damned movies instead of repeating old made up shite nobody actually has confirmed but just said at one point in time to make themselves seem in the know and whoops, make believe once again becomes  fact!

But we do know for a fact that Zombie and Zombie Holocaust where shot on the same location and yes, there are a lot of similarities in the a lot of the scenes of the final act. But there's no stealing of footage... You should recognize the flappy doors where in Zombie, zombies shuffle in (before meeting the blast of Al Cliver's shotgun) and in Zombie Holocaust you'll recall how the Cannibals pop in, and out of those windows. And there's a reason they both look the same and I'd say it's a safe bet that those interiors are all shot back in Italy. In the Elios Studios in Rome to be precise. 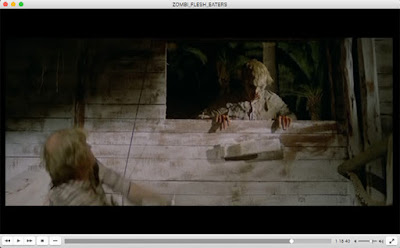 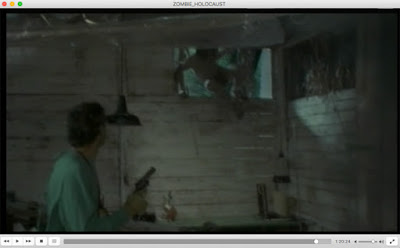 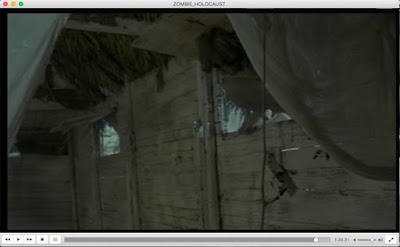 Flappy window in Zombie Holocaust version 2, where you can see the same locking mechanism as in Zombie... because it's all part of a set at the Elios Studios where basically every damned piece of Italian genre fare worth its name shot interiors.

But with the interiors being so damned familiar, logically because they are the same sets, there's a persistent tale which would lead us to believe the final fiery climax and the church in flames is lifted from Zombie 2 too because it's the same church that's burnin'. But... just like the infamous four second head-crush missing from ALL prints of Bianchi's Burial Ground but the Japanese VHS, it's not true. Sorry, but it's just not, Neither the Head-crush or the church burning. It's two completely separate buildings and I'll show you. 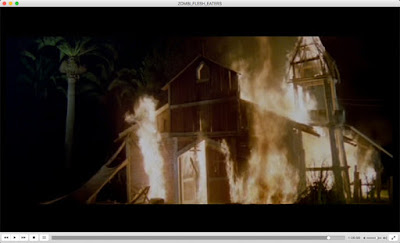 Burning Church, two words I love to see together, but this time to point out that in Zombie 2 the church is in fact a burning red church... 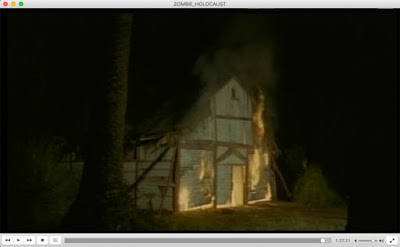 ...whilst the burning church in Zombie Holocaust is a burning white church. So can we let that one go now please.

We'll aslo fast forward past the obvious similarities in the stories of both because they are only similar because De Angelis needed a script quickly.

Instead let's end this by talking about that footage which is reused... and I'll show you that even there we're deceived to believe more than actually is true...

In Zombie the team roam around in their 1979 Series III 109 Land Rover Station Wagon happily driving through the landscape where they make two trips. One to the wooden Church where they drop off Dr Menard and then venture on towards his residence. Easy. The light blue Land Rover with registration plate 402-532 gets a decent spin in the last hour of the film. It's introduced in a quick shot just before the hour, an easy master shot of the jeep driving left through the shot behind some palm trees.  We get the recap story told that puts the legendary "The boat can leave now. Tell the crew" quote into place before seeing some superb camera work by Sergio Salvati as he follows a flying herron from the sky pans down to meet the jeep in the distance. A donkey wanders into frame and the jeep shoots past and to the left of frame where [Vincenzo] Tomassi effectively edits his way through more exposiotinal dialogue before they end up at the Church. I'll be referring to that shot as the donkey-shot form here on. Dr Menard gets out and the gang continue to the Menard residence. We stay with Menard and Lucas (Dakar) and the first cut back to the gang sees them driving on the right side of the screen parallell to a river, this is what I'll call the river-shot. After the zombie attack at the Menard residence they get back into the Land Rover and take off along a beach with the jungle to the right of them, the sea to the left (Cliver's arm sticking out the back window) in what we'll call the beach-shot. The last time we see the light blue Land Rover, it's crashed into the jungle after swerving off the road to avoid hitting a zombie. Our friends wander into the conquistador cemetery for some iconic moments of Fulci terror before the last act rolls out. 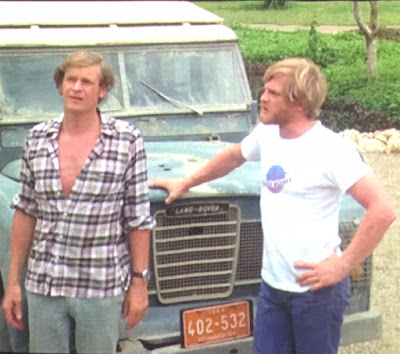 McCulloch and Cliver park the Land Rover in Zombie 2.

In Zombie Holocaust, the Land Rover action is already at the 25 min mark, we can clearly see it's Fulci's  402-532 light blue Land Rover, and the scene starts with Salvati's splendid pan down to the "Donkey-shot" but cuts away just before passing the donkey. Zombie Holocaust editor Alberto Moriani, just like Tomassi, cuts to expositional dialogue inside the jeep before cutting back to the "river-shot", after which he cuts to more dialogue before cutting to a shot that's all cinematographer Fausto Zuccoli and Girolami's film. A shot which is very much like the beach-shot but it's not. Also if you pay attention, I mean really pay attention, you'll see that the car changes color. It's no longer Fulci's right blue 402-532, it's now Girolami's dark blue jeep with the registration plate 90081. 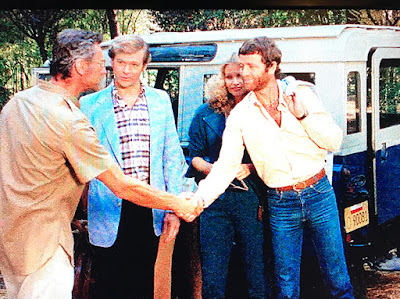 So to break this down and stick to facts, there's actually only two shots from Fulci's Zombie 2 lifted into Girolami's Zombie Holocaust - the donkey-shot and the river-shot. Two shots and never let anyone tell you otherwise ever again.

Thanks for being patient and bearing with me on this busting of yet another decades old rumor.
Now go check out the infamous BURIAL GROUND-GATE debacle, thats just as fun.
I promise.

"Burning Church, two words I love to see together", hahaha. Glad to see you haven't lost your acerbic wit, or your attention to horror minutiae. Two posts in a week, is this some kind of renaissance?

Glad you liked it. Letterboxd doesn't have place for elaboration. It's all quick and dirty there, so maybe.
:)
/J