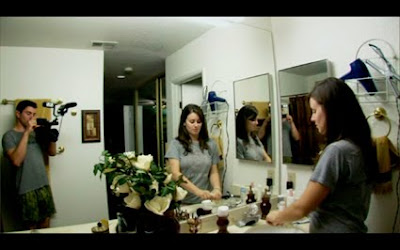 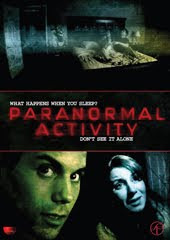 Even though I’m a fan and supporter of independent film, I can’t really see why this one was picked up by a major company and then boosted with that incredible guerrilla marketing campaign… which I now feel that the petition to get it on screens was all about after actually seeing the film. What’s the friggin’ hype all been about? When did this movie earn he name ”the scariest movie in a long time…” I didn’t find it scary at all, I wasn’t impressed, I wasn’t especially interested in the characters, I didn’t really give a fuck, and that ending… holy crap, how many times hasn’t that been used before? 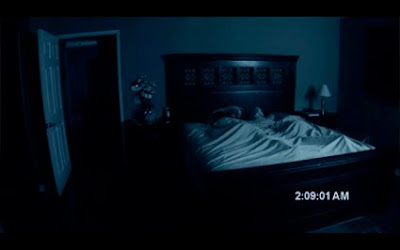 Nah, I’m really disappointed in Oren Peli’s overhyped Paranormal Activity, as it really wasn’t that scary at all. My wife didn’t even find it scary, the ”Will I dare sleep alone tonight when you watch your second movie?” question posed as we started to watch went to a ”See ya later honey!” as she shut the door and it was pretty obvious that this movie had failed to hit the mark. 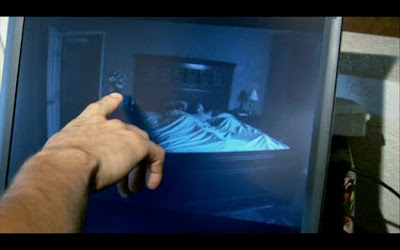 And that’s a bit of a strange thing, as this is a movie that I first heard about almost two years ago, and I've been really looking forward to being scared shitless for a long while. Already 2008 people where saying that it was the ”scariest movie” in ages… and the net was buzzing with pieces on the new classic to be. Just last year when I was working on the Ministry of Horror the head of a major company here in Sweden said that we should do something on this movie, as it was the most scary and disturbing movie he’d ever seen... I know that there where several changes made to the movie, as Paramount demanded it picking it up and releasing it theatrically last year after that great grass roots rallying of the fans. But I fail to see that the studio would have sliced anything of the plot or narrative out to scare audiences even harder. So I don’t really see what all the hoopla is about, and why this one when there are considerably better flicks still out there without distribution. 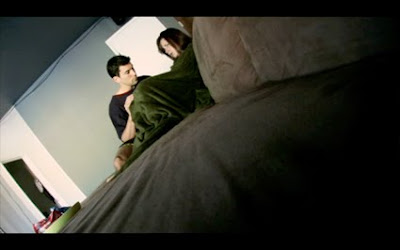 So why did I not like this movie? One: sticking a pseudo ”reality” sign at the start of a movie is getting pretty old and I don’t think that anyone ever really falls for that anymore. Two: the Micah character is completely unbelievable. I don’t feel anything for his character and instead just get irritated by his ridiculous taunting of the demon, lack of respect for his girlfriend and complete failure to convince me that he actually does get scared from the strange activities in there house. Trust me, nobody would be as controlled and calm as he is after repeated shit happens. Three: it takes too long, and it’s too obvious whilst they build towards the first attack, which isn’t much of an attack, and there are more strange noises in my house than that initial encounter with the demon. Four: Lack of Back story and characterisation. I never really get into the head of the characters. That could have easily been taken care of if Micah or Katie had taken a few minutes to talk right into the camera and confess or share their real emotions as if making a video diary. Everyone remembers Heather Donahue snivelling and discharging snot all over the camcorder in Blair Witch Project 1999, and that’s the scene that sells the realism. It authenticates it all and we obviously become deeper engages with a character that shares their fears, flaws and regrets with us in that way. Five: that ending sucks major ass. 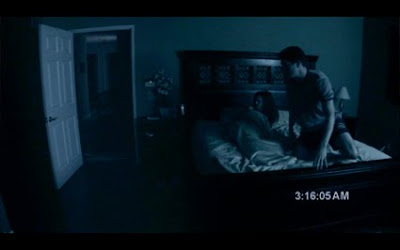 But I do like the form, even if the home footage / documentary style is getting boring, and more of a genre convention than an innovative novelty, and movies without opening credits or endings have been old since Coppola did it with Apocalypse Now 1979. Although there are some freaky – not scary - freaky scenes in the movie and the frustration of Katie is believable. But if she really were as scared as she was, she wouldn’t have taken Micah’s constant documentation for as long as she did. Neither would she have let him off so easily for the Ouija board incident. I also liked the subtlety of the incidents, especially the ones that you had to pay close attention to see, such as the slight breezes or swift shadows, not to mention that great part with the talk on the floor... It just goes to prove that you can get a long way with atmosphere and viewer imagination and don’t have to smear the whole thing in flash effects and screaming sound effects. And no matter how effective the scene when Katie is pulled out of bed and into the hall ism it still kind of breaks the form and starts to feel more like a classic horror movie trick which I find busts the mood as the movie get’s close to the climax. And as mentioned above, the climax leaves a lot to be asked for, and I’m not talking about a great reveal, but something that stays more in line with the rest of the movie. It’s more of an anticlimax than anything else, as I could see it coming from a mile away. 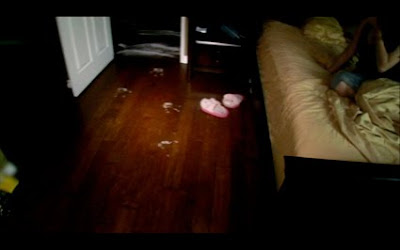 I would have been more freaked out if Katie has stayed by the side of the bed and simply watched as something got Micah and made him pay for his ignorance and taunting. Katie awakens and when the cops get there, she's charged even though she obviously was innocent., which we the audience know that from the footage we just watched... That would have been much more scarier than breaking the fourth wall and attacking the camera or in other words the audience in that silly ending. 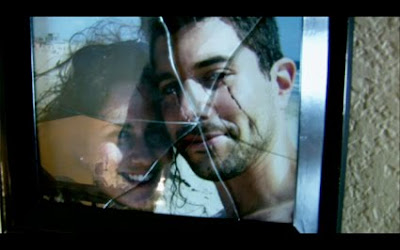 So no, I didn’t find Paranormal Activity to be the scariest movie in a long while, I actually found it kind of boring, predictable, and somewhat insulting as they way to times felt obliged to show me a second time what had happened the night before with the characters interacting to what they see on the monitors… In all honesty I was bored. I feel that it’s safe to say that Paranormal Activity is indeed a classic mainstream horror; aimed at mainstream horror fans, the ones that don’t see horror movies on a regular basis, because that’s the only people I can see being scared by this movie. But if scaring multiplex audiences within the accepted frame of convenience determined by the men in suits was the dream that Peli had when he set out to make this flick, then I certainly raise my hat to him as he at least created a movie that definitely caused a stir and more than likely created himself a whole little fan base that will follow him from here on. 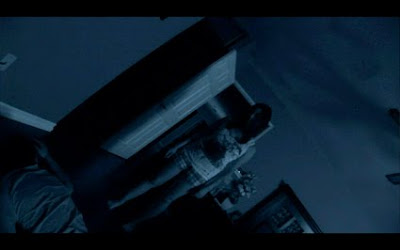 Image:
Widescreen 1.85:1
Audio:
Dolby Digital 5.1,dts Digital Surround. English Dialogue. Swedish, Finnish, Norwegian, Danish and Icelandic subtitles optional.
Extras:
An alternative ending… and what the fuck was alternative about it? It’s just as ridiculous to break the fourth wall and stare into the camera as it has no real effect.
- May 29, 2010

Boooring, the movie that is, your analysis was brilliant as usual...