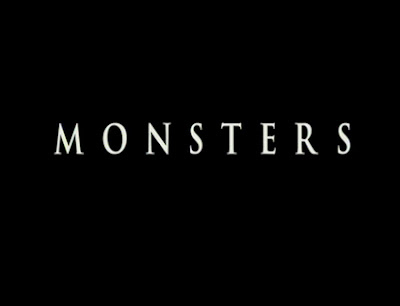 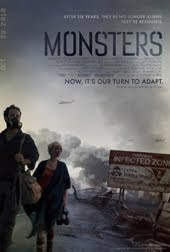 A probe returns to earth after NASA discover an alien life form in our solar system. But after the probe explodes during re-entry, crashing into Central America, a new life form starts to take hold of the jungle. Six years later, an “Infected Zone” separates America from Mexico. When the monsters in the zone start to attack outside the zone, freelance journalist Andrew [Scoot McNairy] is assigned to the task of getting his employers daughter, Samantha [Whitney Able], safely out of Mexico. Pretty soon they find that greed and corruption are at apparent even in times of crisis, and they are forced to take a route though the perilous Infected Zone to manage their return to American soil. 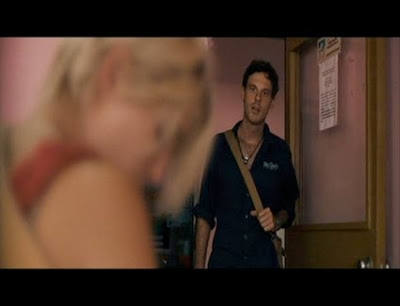 Comparing Monsters to District 9 would be wrong. There’s nothing that really connects them apart from the fact that aliens are part of our world. It wouldn’t be fair to compare it to something like Cloverfield either, as that movie kicks off hard from the start and just slows down as it goes along. The Mist isn’t too far off despite it’s piss poor characters and predictability. But somewhere in-between those three movies would be a good spot to place Monsters, even if I found this movie to be quite a lot better than all of them. Probably because District 9 uses is a comedic social metaphor grip, Cloverfield has thatstrong survival horror approach, and The Mist uses a really poor TV movie narrative and a social aspect with religion versus science angle. Monsters is neither, as it stands firmly on it's own. 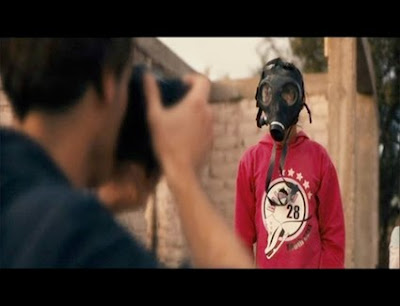 Monsters is one of those skilfully crafted flicks that walks the stern path of realistic drama and uses a fair amount of horror genre traits to make some really effective moments. And there are some really creepy, suspenseful moments that certainly get the adrenaline pumping, especially whilst in the Infected Zone. But with that said it has to be pointed out that there are some really tender and delicate moments in the movie too. And that’s a vital ingredient to why this movie works. 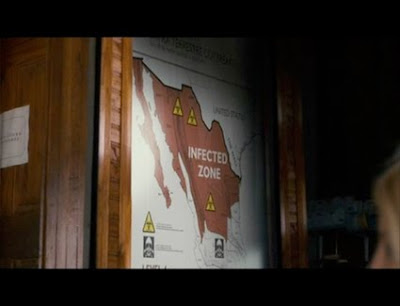 Despite the title I wouldn’t say that Monsters is a horror genre piece. Instead, as mentioned above, this is first and foremost a drama. At times there’s a road movie quality to the film, at times it is horror tinted, and at others a tender romance, but never one determined genre. It’s a well-crafted mix of them all. 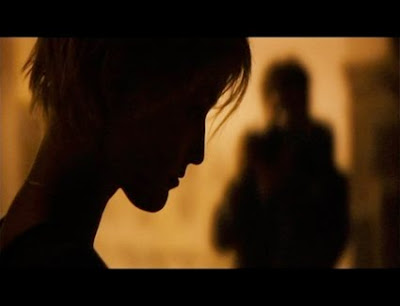 There’s a few effective ways that this movie manages to pull off it’s narrative. First and foremost, there’s the time taken to establish characters and their ordinary world. Second there’s the threat of the creatures, and then in the last act the deeper development of the characters. There are a lot of minor subplots and emotional arcs that come to a grand climax before the last minutes play out. 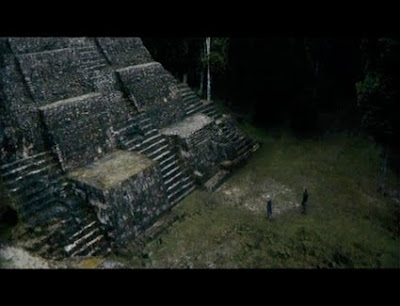 So in short, the movie plays out in three waves, the set up, the threat and the climax. It sounds pretty simple, but it’s all done in a really effective way. The handheld faux documentary style works for the movie, even though it’s never said once that this is a faux documentary, it just holds that tone, then the tone and mood shifts when in the Infected Zone. Rapid cuts, jumping over the axis and creating confusion as we isolate the characters from stern reference points… it’s all green and growling jungle. Finally the movie lands in the last act and the pace slows down giving time to those conclusions about to be made. 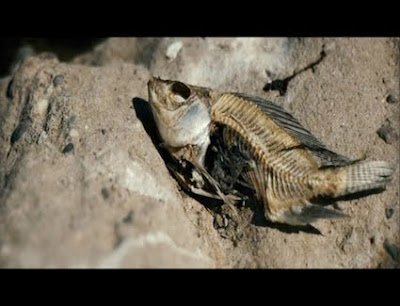 The ending may seem to be somewhat positively open when you first see it, but being that I always enjoy a movie that stimulates my mind, Monsters really stayed with me when the light went on and I connected the dots. Monsters does just that, it makes you think, because if you have been paying attention to the flick, the ending will give you a shattering rush of insight that puts the movie in a whole different light. This is a brilliant move by Edwards as he invites the audience to make the connection. A few edits made differently and the film would have had a completely altered tone. Instead it’s a piece that does crawl into your head and that all boils down to the characters and age-old emotions Life and Death, with love in between. Now don’t back away just yet. Monsters isn’t a love story, it’s not a romantic movie either, but it is a movie that plays hard with powerful tools like sympathy and empathy. Two of the most important ingredients no matter what genre you are working in. And we will always want a love story to work out, even in the most sinister and nihilistic world. We can fell the feeling and have an emotional recognition with the characters which makes us empathise with them, hence making us care about the characters. Characters who are driven by the choices and actions they take. There’s a hefty does of common sense and logic in the narrative that otherwise easily over turned this movie, and the subplots come into action during these moments giving a subtle insight into what really is going on in their heads. I keep saying emotional movie, and that’s pretty true, because there’s a lot of that emotional recognition that helps it along. As a viewer I can totally understand the reactions Andrew and Samantha have in their interaction. I understand why they make the choices and go about the actions they take. It’s quite rare to see movies in this niche work this well. Remember in Cloverfield they decide to go look at the monster… dumbasses. You don’t do that, you run. There's a certain irrationality to their actions. But Andrew’s a freelance photographer and Samantha’s father pays well for shots of children killed by the alien life forms. See, there’s a logic reason to their actions and choices that make it all believable. 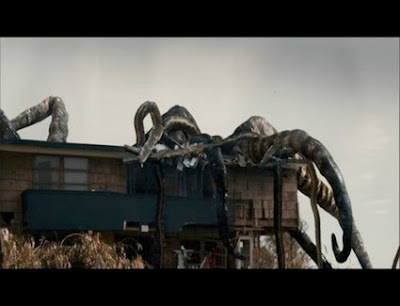 Finally we have to talk about the monsters. There’s a lot at stake when you call your movie Monsters, because if you don’t deliver, then you are screwed. Looking back at the movies I mentioned in the opening, District 9, Cloverfield, The Mist. Well they all kind of suffer from the same problem, once they show and reveal their creatures it never really manages to keep me interested. Sure, you could argue that the aliens in District 9 have character and personality. Yes they do, and at the end you have seen so much of them that they become acceptable characters themselves. But they don’t really intrigue me anymore. Cloverfield;, as soon as they showed that big bad monster, well, then the mystery is gone. It’s just a big bad monster. The Mist does manage to show monsters in various sizes and keeps it fresh, but at the end? It’s just a bid bad monster show too, and after those gigantic ones hit the screen it just looses it’s power because they are nothing but big bad monsters. But Monsters manages to present a rather interesting and intriguing monster that isn’t filled with the common big bad monster conventions. Sure, that’s the image we get in the early stages when we see them on the televised assaults, and when they attack during the movie – big bad monsters that wreck stuff and are more or less indestructible, but this all changes the further the movie goes. And the final question you ask yourself is, are they really monsters? The last minutes of the movie are easily amongst the most poetic and emotional monster scenes since Spielberg’s tear jerking finale to Close Encounters of the Third Kind... if you get the rush of insight that is. 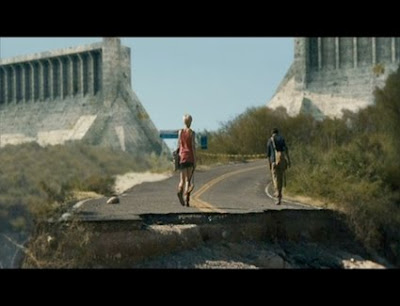 Monsters is a brilliant debut feature. Engaging, creepy and moving. It's no secret that Edwards has a background working with C.G.I. on documentaries and stuff, and it shows. There’s not one spot where the computer-generated materials expose themselves. It all looks extremely authentic. Edwards has crafted an intelligent, beautiful and atmospherically movie that definitely deserves all the attention that it is getting and will have in the future. He can easily get in line with some of the leading new names of genre cinema spawning out of the UK as of now. It’s a great piece and the future seems to hold great things for Gareth Edwards. I’ll be looking forward to it.

I'm glad that you seem to have liked this as much as me. It's really stuck with me in the last few weeks.

Edwards' CG is impressive isn't it? The display of bioluminescence at the end is very beautiful - and as you say, poetic.

I agree that it doesn't really deserve comparison to those other three movies, it's too original.

Have you checked out Neil Blomkamp's new teaser/short/whatever? It's up at Twitch and it's cool. Personally I absolutely LOVED District 9.

Aylmer!
I really really enjoyed Monsters. As much as I dig nudity and gore I equaly enjoy the smart flicks that hold back.

I absolutely liked District 9, it had a great Peter Jackson vibe to it, and Blomkamp made a brilliant movie. When you get me empathising with a friggin CG prawn, you've done the job right!

Yeah checked that teaser thingy out the other day. Pretty neat. Although they should have skipped the cue music and just gone viral.