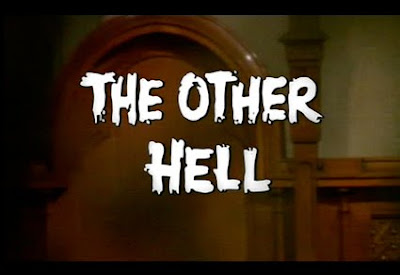 I’ve really not seen enough Bruno Mattei movies in my time and wish I'd get round to seeing more. But for some reason it’s only a handful of eighties flicks that I keep returning to over the years. It’s hard not to enjoy a movie like Virus - L'inferno dei morte viventi (Hell of the Living Dead) 1981, or Rats - Notte di terrore (Rats - Night of Terror) 1984. There’s a mesmerising eighties Italian low budget charm to those movies that I simply can’t resist. Trashy, dodgy and kind of corny, but that’s just the way I like them, and especially the ones penned by Mattei and long time collaborator Claudio Fragasso, because you know you are in for a treat when those two got together. Using one of his many pseudonyms, this time Stephen Oblowsky, Mattei serves up a rather intriguing, movie set in a nunnery starring Franca Stoppi, Carlo De Mejo and a score by progressive rockers Goblin. 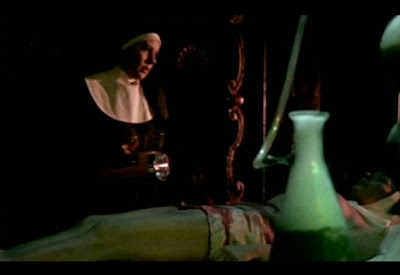 Opening with a rather strange montage of a nun wandering the dark corridors of the catacombs searching for Sister Assunta, The Other Hell, establishing not only sister Assunta [Paola Montenero] but also Mother Vincenza [Franca Stoppi] and Boris, the gardener [Franco Garofalo – who you may recall from Mattei’s Hell of the Living Dead where he gave a show stopping performance as the psychotic Zantoro], both important characters, as we will see later. Then it gets into setting up the theme of the flick, when Sister Assunta conducts a savage autopsy and violently defiles the corpse of a dead nun whilst claiming that the genitals are the door to evil. After the glowing red eyes of a demon mesmerize Assunta, she goes insane and stabs her assistant to death! Father Inardo [Andrea Aureli] arrives to investigate the strange string of murders and deaths that have plagued the nunnery, and obviously peculiar shit starts to happen all staying true to demonic activity formula. Bibles burst into fire, lights explode and owls fly in slow motion – giving Mattei an opportunity to use some stock footage. Moments later an unfortunate sister is possessed and bleeds to death from her stigmata whist Father Inardo preaches the love of the lord. 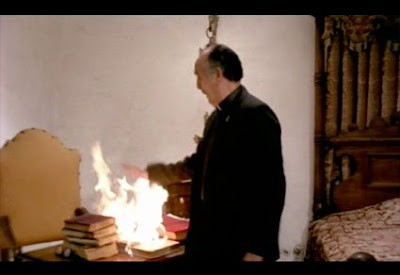 Then the investigation plot takes off, and investigation plot with a dash of Nunsplotiation horror elements. Father Valerio [Carlo De Mejo], an obvious sceptic to demonic possession and believes strong in science. A fascinating conflict of interests for a priest to have and stuff that gives splendid dimension to Father Valerio. And it makes for a fascinating conflict between Father Valerio and Mother Vincenza when he arrives at the nunnery so see that she is profoundly convinced that the Devil is behind the all the deaths, whilst he is convinced they are murders. 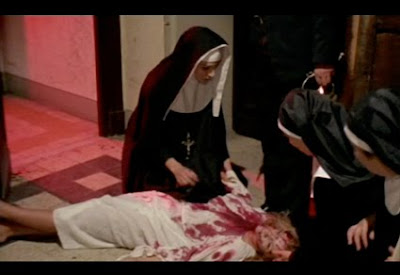 The Other Hell is something of an odd little movie. A mystery murder piece with horror traits at the core – I’m a bit hesitant to actually call it a Nunsplotiation flick, because there’s practically no nudity or any sexual romps with Satan on screen at any time, and nothing ever really feels exploitative in any way. Which may seem somewhat strange considering the movies that Mattei made in the sexploitation field and the assemblies of stuff like Jess Franco’s 99 Women 1969 that he over saw. Although Mattei has said that he wasn’t interested in making that kind of movie with The Other Hell, but a straightforward mystery horror, which he also continued to claim enjoying the best. 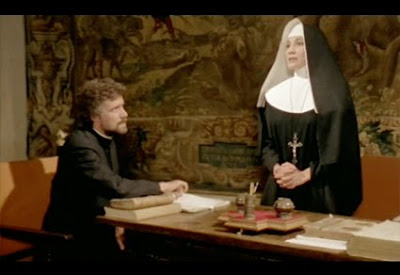 There’s also an apparent influence of Dario Argento’s Suspiria 1977 and Inferno 1980 especially if you take a look at how the movie looks in it’s lighting and certain camera angles. There’s a lot of heavy lighting with reds, blues and greens and a lot of cheap laboratory/alchemy props in the foreground of many shots. Those movies have undoubtedly been an influence. And that may be a good thing as the movie is very entertaining and never really get’s too far out, and god knows there’s been some far out silly imitators of those two movies in their time. Instead it stays close to the mystic investigation plot and there are some really impressive scenes – like a full burning body suit, the strange masked woman in the attic, and the shocking reveal at the end. 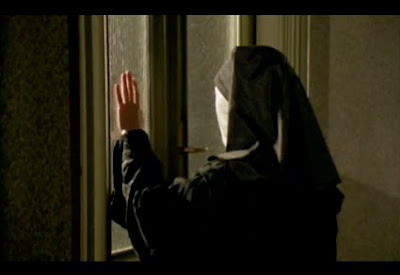 The mystery at the core of the story is an interesting one and does have a decent surprise to it when it all comes to the surface. The mystery of the masked woman is revealed and the reason for the murders in the convent is understandable. They are motivated by a terrible act in the past – and that back-story is one of the best things with The Other Hell, I won’t bust it for you here, just in case you haven’t seen The Other Hell. But it’s a brilliant beat, because when you think about it its just mind blowing – especially if you take into mind the “horrific” opening and what Sister Assunta proposes there. In her opinion, children are the fruit of Satan and should be aborted before the womb is torn out! 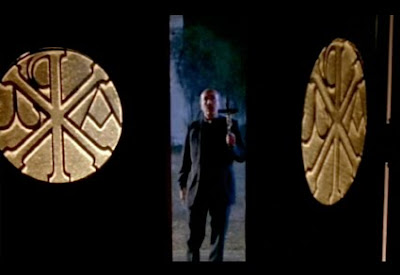 Although The Other Hell at times is very tedious with a fair amount of filler scenes – just how many times can nuns run up and down staircases – but it’s still deep with atmosphere and does actually have one of the best stories and final twists penned by Fragasso. An ending that stays true to the usual downbeat climaxes I find seem to conclude the handful of Mattei/Fragasso movies that I’ve seen. 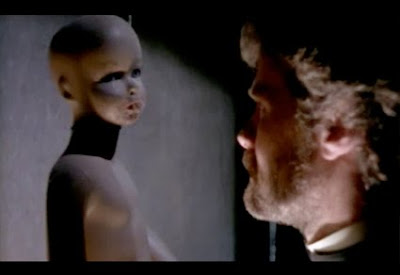 Carlo De Mejo is fantastic in The Other Hell; he feels as if he’s just walked right off Fulci’s City of the Living Dead 1980, into this one with a quick stop at wardrobe. And Franca Stoppi, although nowhere as outlandish as she is in Joe D’Amato’s Buio Omega 1979 makes a fabulous mother superior with a dark past and haunting secrets behind that stern façade.
The Goblin score doesn’t really do much for the movie. Once again it’s a reusing of previous tracks, this time mostly lifted from D’Amato’s Buio Omega, much like on Hell of the Living Dead. For editor Liliana Serra, who had previously worked on several Alfonso Brescia movies and was an assistant editor on a couple or Mario Bava flicks, The Other Hell was her final movie. 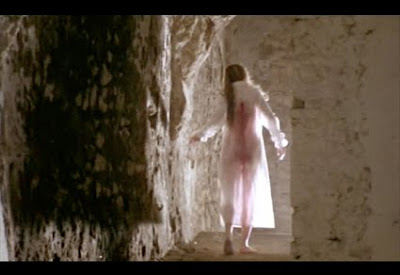 All in all, The Other Hell is a decent Mattei/Fragasso vehicle that entertains, entices and almost hits the most of the right spots. Don’t go there if you want randy nuns drinking she communion wine and having it off with old Nick, but if you want a lighter take on something like mix of Argento’s Suspiria, Inferno and say Norman Jewison’s Agnes of God 1985, then this is the ticket for you! It's gradually becoming a personal favourite of mine through the years. 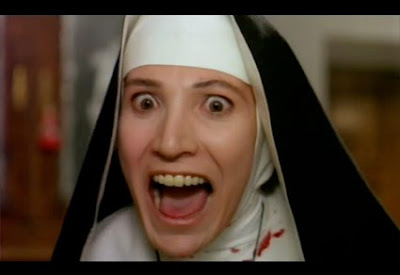 I really enjoy this film.
It has the right vibe.
Anything with Franco Garofalo is worth a look.
Oblowsky is an ace pseudo-Polish moniker.
This movie is in my top-three Bruno films, with HOTLD and EMANUELLE IN PRISON which is action-packed and has another great part for De Mejo.
As you say, it's actually a pretty polished little film from Mattei-Fragasso team. Need to get a decent release of this, mine's still VHS:))

I love the fact that he (Garofalo) just got fed up one day and left it all for a life in the countryside instead! He could have been huge if only he'd been discovered a few years earlier and stuck around a short while longer. He's totally underused in this movie, and yeah it's odd how this movie grows on me on each repeated view.

I agree that Garofalo is underused in L'ALTRO INFERNO.
Oh by the way - that sure is another Argento connection - L'ALTRO INFERNO literally translates as ANOTHER INFERNO. Or poor man's "INFERNO" ahaha.
Have you seen Garofalo's IMDb?
His last credit must be incorrect, it lists him for some Australian TV movie or something!

yeah I know hillarious isn't is, Another Inferno... and not forgetting that Carlo De Mejo's mom is Aida Vali... who was in both Suspiria and Inferno... :)