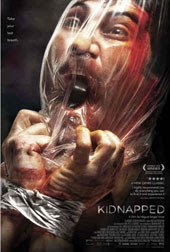 I think I just saw what might be this years “punch to the head” movie… Spanish flick Kidnapped is a right nasty bastard. Violent, raw, stylish and definitely one hell of rough ride.

Kidnapped tells the dark tale of a family who move into their new house only to have it invaded by three hooded men who take them hostage. There’s really no need to say much more about the plot than that simple line, as Kidnapped takes a home invasion flick, brings sadism and realism to the table and slowly builds towards a violent crescendo. It is a disturbing movie and it does affect its audience.

I really liked Kidnapped and it will undoubtedly be in my head with each noise I hear tonight. I like intelligent movies that work their way into my head and stay there for a while. Stuff that you don’t just shrug off like much of the popcorn horror that we spend time watching too. There’s nothing really wrong with popcorn horror I really like that too, but it never really gets to me in the same way as these kind of movies do. Home invasion flicks mirror my biggest fears. I once had an unknown woman standing in my living room some twenty years ago and that really freaked the hell out of me. Staying calm as I could – my girlfriend at the time, actually hid in our closet - until I got the strange woman out of the flat, called the cops and had a locksmith change the locks, I really never worked out the shock and horror I felt at the time. Deep emotions that always surface whenever I watch this kind of movie…

Several reviewers have pointed out that this movie simply is, that meaning there are no moral pointers or judgement stories baked into the movie. It just shows the impact of the assault in the most realistic way possible. Yes, this is true, but at the same time there are a lot of storytelling details that I find make this an interesting film.

There is an initial attack. The first scene is an initial attack; an attack that set’s the tone for the film. It set’s an external threat, and it can also work as a trigger for anticipation. When we meet the family, we may have this scene ahead of us… or not. It creates a subtle disorientation, which genre movies thrive off.

Scene two, where we are introduced to the family of Jamie [Fernando Cayo], Marta [Ana Wagener] and their daughter Isa [Manuela Vellés], introduces us to their world. It not only establishes their relationships – how their family triangle works – but it also explores the house as the camera moves from Jamie, to Marta to Isa and back again. Scene two along with scene three are the important scenes that create empathy for the characters. Marta and Jamie discuss how they should relate to their daughter, how they should relate to each other, everyday concerns are aired and we learn how Isa interacts differently with mother compared to father. We know them slightly the everyday discussions, concerns and thoughts they have creates an emotional recognition that helps us as an audience to empathise with them.

Scene three also delivers the unexpected shock of the invasion. It’s fast, it’s ferocious and it comes from out of nowhere and had me jumping high off my chair. The observing linear approach is seriously much more frightening than a non-linear discourse with edited shots of the three hooded men approaching the house would have been. From this moment on we are in the nightmare realm. No answers are given, and no remorse is shown. This is all about enduring psychic torture and the fight for survival.

There are still some interesting questions set to the characters… Scene eight poses the question of what action Jaime will take to stop the kidnappers, when the leader of the pack [Dritan Biba] offers him a loaded gun. Jamie is a man of high morale, and he obviously can’t use the gun. This will return to punish him later. Also there’s an interesting rift within the group of kidnappers as they bicker who gives who orders and show little respect for each other within the band. It’s an interesting trait that later will come back to punish the intruders, and obviously something that Biba has concerns for as he reacts pretty harsh when the two kidnappers still in the house don’t answer the phone when he calls them. It’s almost as he’s terribly aware of the rift, which will shatter their constellation later on.

Technically Kidnapped is a artistic wet dream. Handheld camera to give an documentary authenticity – a classic trick like writing “based on a true story” at the start… luring the audience into a certain mind-set. Long scenes - only twelve of them all in all - which also add to that realism, as there’s no cut aways to effects or reactions. What you see in frame is what you get. The cinematography of Pedro J. Márquez is stunning; dark and haunting, often relying more on the dark than the light. Twice split screens are used to drive the narrative forth, once – in scene 7 to show what happens both within and outside a closed room, and in scene 11 which culminates in an awesome moment when the two feed’s meet. The meeting of feeds leads to a crescendo of strong emotions that lifts the movie high on euphoric release before crashing down into the dark depths of the devastatingly grim ending.

Kidnapped is an impressive and haunting film,  but I have a small problem with the ending. Not really the movie ending in its self, but the almost mandatory ending that these films are winding up having. The endings of movies within this little niche are turning into traits. Traits, which unfortunately are making these movies somewhat predictable. I knew before watching that Kidnapped would have a dark, nihilistic ending, but these grim endings are beginning to become something of a norm which takes something from the movies and makes that last punch lack somewhat in sting. It's becoming convention and trait. But then, they almost always slap on the quirky music as the last body falls to the ground and the end-credits roll... Please. Don’t spoil a hauntingly dark moment with a silly pop song as this comes off as ironic, or even as a laugh because "it was only a movie" or worse that the movie never was intended to be quite this dark. It disappoints me. Especially when there’s been no comic release what so ever throughout the rest of the flick.

Never the less Kidnapped is an intelligent movie. A dark and haunting masterpiece to say the least. A horror movie for adults, and one of the most disturbing genre flicks this year! Place it along the lines of David Moreau & Xavier Palud’s Il’s (Them) 2006, Alexandre Bustillo & Julien Maury’s À l’intérieur (Inside) 2007 - with which Kidnapped shares producers, Bryan Bertino’s The Strangers 2008, or even James Watkin's Eden Lake, 2008 and Pascal Laugier’s Martyrs 2008. That's the kind of raw punch to the head this movie brings. It’s a nauseating rollercoaster that shatters the safety of nuclear family and all the values we hold sacred there in, and although it may be predictable at certain moments Miguel Ángel Vivas has taken it in the right direction, and the space between hope and despair are perfectly balanced before peaking on either side of the scales. It is a rough movie; a movie that certainly doesn’t take any prisoners and it will get into your head.

Here's a trailer, but you really should stay away from trailers for this movie as they all expose way too much. Just see it.

thank you sir. the pleasure was mine.

This movie kicked my ass. Loved it. That ending worked for me!