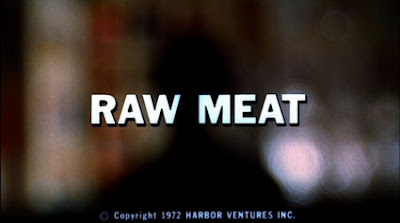 Imagine the opening of a movie where a man is searching for something in a variety of sex-shops and live act clubs… yeah, one get’s certain mental images of red lights and naked ladies don’t you, because that’s what we are used to... But this is a stiff upper lip, British film, so there’s no nudity allowed, instead every possible shot of James Manfred OBE [James Collins] mooching around seedy clubs, fades in and out of blurriness until he get’s down into the subway where “something” attacks him. This fade in, fade out fest which finally lands in an initial attack, setts the premise for this little delight of seventies horror. Then the fun starts as Inspector Calhoun [Donald Pleasance], a somewhat erratic and farcical inspector – quickly recalls several other incidents of people going missing at Russell Square tube station and starts an investigation into the strange disappearances. 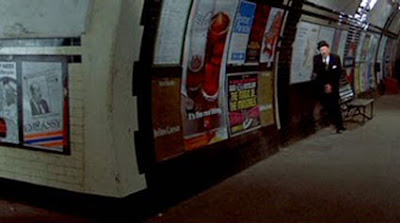 Donald Pleasance, Christopher Lee, and a raving mad cannibal down the old London Subway! Do you need much more of a reason to watch this movie? Well if you do, how about me mentioning a small but fun part by Clive Swift who any one familiar with the terribly funny, Keeping up Appearances, will have a good laugh at seeing here. Then there’s some pretty grotty seventies special effects, and that American retitling from Death Line to Raw Meat to perhaps aim more attention to the cannibal theme of the movie. 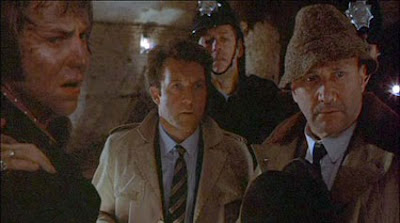 Pleasance is brilliant in this flick; he’s somewhat odd and quirky which adds a great touch to the usual detective part. At times he’s damn right funny, like in the scene where he tries to convince a pub landlord to let him and Rogers keep in drinking despite it being past closing hours. Giving the poor man a choice of letting them drink or being busted for selling alcoholic beverages after closing hours. I completely love the prestige of Inspector Calhoun refusing to hand the case over to MI5, despite Detective Sergeant Rogers [Norman Rossington] claiming that with Manfred, being a man of the Queen the case should belong to the MI5, but Calhoun refuses, if someone dies in my mansion, then it’s my case. This all peaks when MI5 Agent Stratton-Villers [Christopher Lee] turns up to taunt Calhoun claiming that it’s “his” case. Yeah it’s a small cameo, but production value and a selling name on the poster. Never the less after a series of new murders down the subway, they come to the conclusion that Manfred must have been murdered too, which makes Calhoun do a little happy jig. As said, this movie is completely owned by Pleasance. 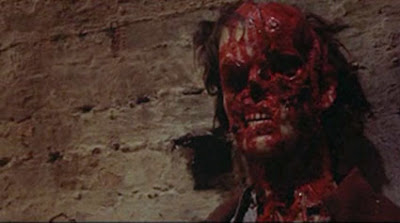 The cannibal man [Hugh Armstrong] tends to his wife, Mrs. Cannibal [June Turner] in her last moments of life – and oddly enough she looks pregnant - and then he get’s all emotional – which in some way could create some kind of empathy for his character. After all this is the end of his family line, and we know nothing of the society that has been living down in the subways apart from their burial chamber filled with rotting corpses and generations of Cannibals. In his grief-stricken state the cannibal takes to violently slaughtering people, trying to rape a chick and biting the head of a rat. This is where several scenes had the BBFC up in arms, and saw them slash several minutes of the movie upon its original release in mid seventies… And may I say that for seventies it’s perfectly fitting violence of the era, an effective shovel to the head effect gimmick, and a impaling, complete with dangly bits of flesh on the end of the pole. 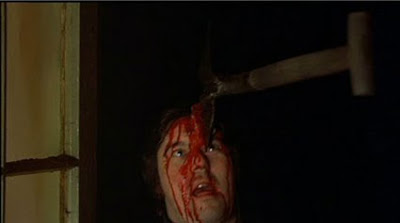 Raw Meat uses a classic investigation plot that ends up taking a twist down atmospherically and damp subway horror. Just think of the best parts of Christopher Smith’s Creep 2004, without, the squealing mutant, and with some really effective scare moments. But it’s not all old geezers in tweed and trench coasts, there’s also a generic and what the adult filmmakers considered trendy and hip young couple – Alex Campbell [David Ladd] and Patricia Wilson [Sharon Gurney] who live through the movie via their subplot. They are the last people to see OBE – they find him on the stairs out, and where Alex presumes the old bloke is drunk, Patricia worries that he might be ill. It’s also this concern for fellow people that later rives Patricia into the subway looking for answers, hence making her an important part in solving the mystery of what resides below… this despite the fact that we already know what it is! Because the genesis of the underground dwellers is already presented within the first half hour when Inspector Richardson [Clive Swift] tells Calhoun and Rogers about the Victorian miners that got stuck down in the underground when a cave in trapped them during the building of the subway. Then film editor Geoffrey Foot – who also edited John Hough’s magnificent The Legend of Hell House this same year – cuts to the half eaten arm of a victim and an atmospherically tense, but slow pan of the underground lair, giving us a grim tour of the cannibal’s domain. 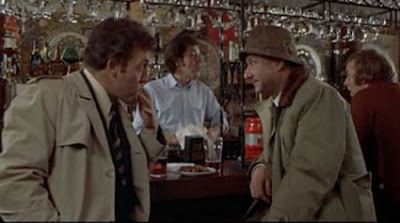 There’s a little fun detail, which means nothing really, but fun to take into consideration. Alex reads a newspaper with the headline “I Stayed at Michael X murder house!” which obviously leads on to think of that other iconic performance Pleasance would give five years later. The one of Dr. Loomis in John Carpenter’s genre defining Halloween 1978

I find it fair to give Raw Meat a 4 out of 6, because it was entertaining little piece of fluff, had a great atmosphere and Pleasance is magic. This despite it trying to stick a last minute shock in there which is so lame I’d scream aloud, if not for the fact that Sherman followed this up almost a decade later with a real gem, the strangely creepy and highly atmospherically dense, Dead & Buried 1981.