The Sky Has Fallen 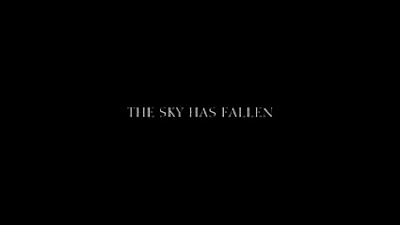 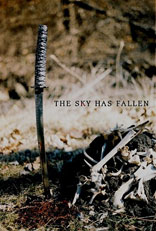 Independent zombie/apocalypse movies are becoming so stereotype that it’s a crime. There’s rarely anything new added to the formula that’s been running on autopilot since 1968. Nevertheless, I love the zombie genre, and can’t tear myself away form watching them. Watching them to find those rare gems that actually bring a new novelty with them to the scenario… Ok, so The Sky Has Fallen might not really be a zombie film, but it does use themes from the genre, and the dead have risen from their graves - even if it is part of a larger scheme of sinister experiments conducted by a strange demonic entity. Perhaps this is where the future of zombie film lies, in crossbreeding it with other niches. Part post apocalypse, part survival horror and part zombie film - just like Doug Roos’ The Sky Has Fallen. 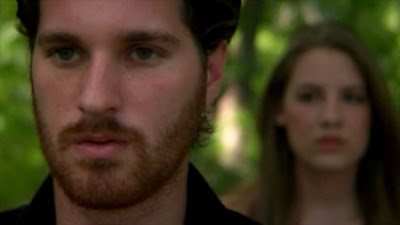 An airborne virus is wiping out mankind. Mysterious black figures are kidnapping the recently dead, experimenting on them and resurrecting them as their undead puppets. The few survivors left, have been fighting the battle for their existence what seems to be an undefeatable foe. One persistent warrior, Lance [Carey MacLaren] is determined to seek and destroy the leader of the shadow beings as to stop the pestilence that’s taking down mankind in rapid succession. Along the path of his quest he encounters Rachel [Laurel Kemper], who also has an agenda of her own… but the encounter also awakens questions of morale, life, death and human nature.

The Sky Has Fallen is a good film, a really good film As far as independent horror films go, I’d be an idiot not to say that Doug Roos is onto something here. This guy obviously knows how to tell a story, bring characters to life and captivate an audience. The Sky Has Fallen has a lot of great fight scenes, some good horror moments, but perhaps most importantly it has heart, soul and intelligence. 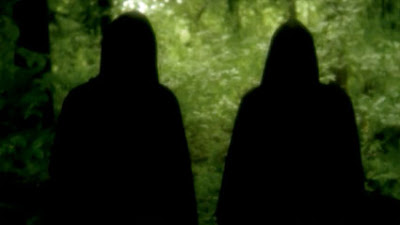 There’s a natural interest evoked when certain information, or backstory, is kept from the audience. Both Lance and Rachel are obviously holding back on telling what drives them towards their goal. Roos boldly explores their backstories through intimate dialogue and non-linear crosscutting in-between fight scenes. This is also where a vague, but existing love story sub-plot evolves. Hardly surprising when two people in an extreme situation, are drawn closer to each other as they reveal their darkest secrets, most inner thoughts and reasons for taking up the quest. It’s a cool way to take a story like this and in many ways much more authentic than a lot of other pieces where women just fall head over heals for any bloke who turns up. I can completely relate to these two finding feelings for each other.

There’s a matter of trust between the two. They strive towards the same goal – terminate the white spectre – and keep each other alive. There’s an intriguing scene where Lance decides to take Rachel on as his companion, which comes through a dilemma between taking her life and saving her from the dark road ahead, or sparing her and at the risk of her being tortured by the black shadows. This brings a creative dimension to the character that makes him stand out amongst other “heroic characters”. I was definitely a wtf moment for me, and the outcome made Lance grow in my eyes, and even more so as his backstory is revealed bit by bit. 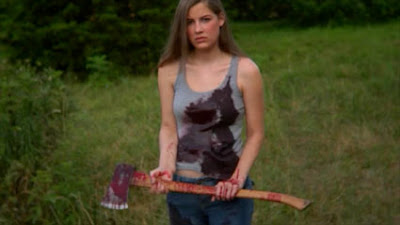 Our old friend guilt makes a great appearance when Lance finally reveals the reason for him taking on his monumental quest. I really tip my hat to the way Roos moves a classic revenge motivation to the side, to reveal a guilt motivator behind it. The guilt of letting a family member down is much more effective than that of a random person he should have rescued. This is a textbook example of how guilt can be used, and Roos uses it in all the right ways.

I really get a kick out of finding metaphors in genre films. When it comes to The Sky Has Fallen, I’d like to point your attention to the scenes with the Priest that Rachel and Lance find along their way… Being that we all have our roots in Christian society, the scene is a great way to tell the audience, in a sublime way, that we’re fucked. Not even God can save us, and the evil will prevail! Keep an eye open when you watch zombie and post apocalypse releated movies... the clever one's usually have this kind of metaphor. 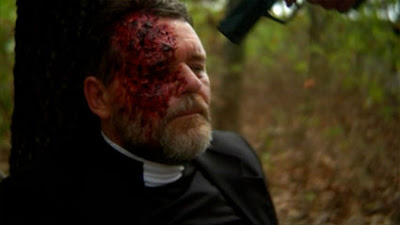 Editing if ferocious, and really packs a punch, Roos definitely has a feeling for getting through a lot of material and transforming it to the most effective substance. Backstory is told in dialogue, but also violently spliced into the other wise calm flow of the dialogue scenes. It creates unease as these violent bursts disrupt the sobriety of the tales they are trying to tell. It works brilliantly. I would most likely have gone over the editing of the dialogue scenes once more and create a better flow there – not due to pacing, but because the somewhat restrained delivery of dialogue and pretty straight cuts make those moments feel sagging at times. But these moments are luckily contrasted by the highly efficient editing in between, such as action and fight scenes. It should be pointed out that there is a terrific amount of dialogue in The Sky Has Fallen and Roos deserves every inch of respect you can give him for the amount of dialogue. It’s certainly no small feat to make a movie that mainly relies on it’s dialogue scenes, and at the end of the day, for a low budget feature with what I presume is amateur actors and actresses how they deliver there lines is a small issue. 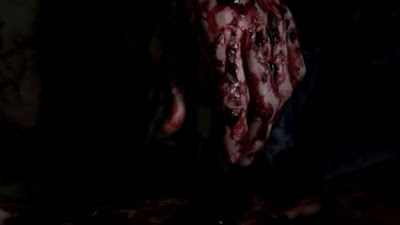 Sometimes bad luck turns into good luck and works to one’s advantage. Roos had covered wide shot footage but later felt that they weren’t quite working out when he got to post. So he removed them from the edit. Which was kind of unfortunate, as the film never really establishes locations, space or setting. But at the same time it works great for the movie as it forces most shots into being half shots, close ups and extreme close ups that creates an immense intimate feeling with the material. With the subplots that play though the film, this intimacy is exactly what the movie needs and what brings that all so important heart to the movie. The effect is almost as if becoming a third party at the camp fires where Lance and Rachel share their stories, fight the creatures and slowly are drawn to each other. 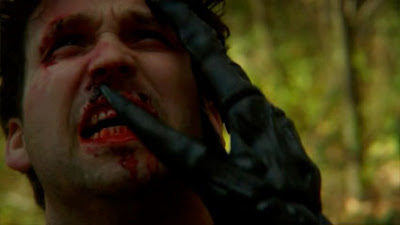 The score is absolutely beautiful. For real, I see way to many flicks with synthesizer-orchestrated scores, or even worse goddamned keyboard drones. But the music to The Sky Has Fallen, composed by James Sizemore is magnificent and really adds a layer to this fascinating low budget gem which definitely leaves an impression on it’s audience.

I love the irony that Hollywood can’t get shit to fly, despite huge budgets, extensive re-writes, re-shoots and tossing all the “hot names” into the mix. Then comes a young man with a vision, no budget, amateur actors, shots, directs, writes and edits his own movie and it resonates louder than most the shite the studios “think the kids want”. Doug Roos has created an original, impressive, one of a kind flick that definitely promises a lot for future projects to come. 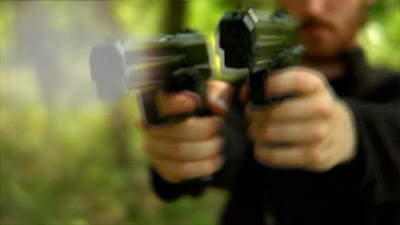 You can buy and enjoy The Sky Has Fallen right here!

Another movie I have to see after your write-up. Is it out yet or did you get your hands on a screener?

I posted the same trailer on my blog and now they've had to take it down because of a copyright claim. Like, HUH!?

Why would a little indie label tell YT to take a trailer down. A trailer is basically a commercial for a film, why take down free advertising.
DOES-NOT-MAKE-SENSE!!! >_<

Bizzare... talk about biting, no MAULING the that feeds you...

It was a very old trailer, which sadly a lot of people used to unfairly judge the film without actually seeing it so that "free advertising" (and it's not like thousands of people were watching it anyway) just hurt the film. One guy literally wrote a whole blog post just reviewing that trailer (and he reviewed it like it was the entire film!)... THAT doesn't make sense.

The other trailer on YouTube has gotten a much better response since it shows the awards the movie has won and review quotes it has received. A link to this new trailer was sent to all reviewers but quite a few still linked to the old trailer since it came up first in YT search results. Damn YT.

Personally, I didn't need a better trailer to buy the film. As I mentioned it in my blog post here I ordered it based on Jason's review here on Cinezilla. I'll post your new trailer (if I can find it, LOL).

Thanks for letting us know.

Thanks Jack, I really appreciate you buying the movie, and I'm sorry about the thing with the trailer.

As far as Cinezilla, I can't thank Jason enough for his review. I'm deeply honored he thought so highly of the film, and I really appreciate his thoughtful analysis and insight. I don't even think it's as good as he said (it's my first micro budget feature, and I wish I had done better with some things), but he noticed a lot of stuff other people missed. Plus, the amount of depth he goes into with all his reviews is just incredible. Some guys just write a couple sentences and call it done. Not Jason. When you spend so much time making something and putting everything you've got into it, that really means a lot.

I appreciate your supportive words. Keep up the great work and let us know when we can look forward to you next flick!