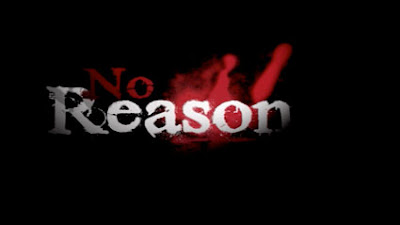 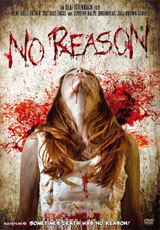 It was raining, the thunder was roaring outside the window, and my kids where wanting to watch some damned cartoon movie for the umpteenth time… patience was low, tension was in the air… but they won, the got their animated movie and I redrew to the kitchen table to with a sigh. Until I realized that this was a perfect time to stick one of those “no, you can’t see what I’m watching” movies on my laptop and get some video time put down to use. 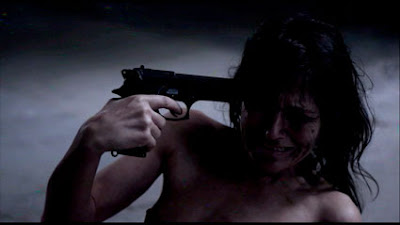 A naked woman, who we later will come to know as Jennifer [Irene Holzfurtner], holds what appears to be an official of some sort at gunpoint. He begs for his life and tells her that he’s got a wife and child at home. She cries out that she also had a child, before they start to struggle. He beats her with a 2x4 that he’s grabbed from a pile of rubble, and she pulls the trigger of the gun, blasting bloody holes in his wide torso. She stares blankly into the void before turning the gun against her own head and pulls the trigger, sending her brain matter splashing across the screen. Now this could easily have been the climax of the film, but it’s not, this is merely the beginning and Jennifer’s death is merely the start of her torment, and the journey that will kick us head over heals. 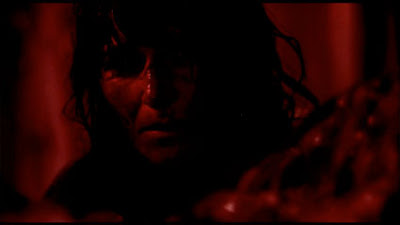 There’s something really interesting in No Reason, something that makes me put Ittenbach in a whole new light. I’ve previously primarily seen Ittenbach’s movies as good old, German Splatter, with all the trimmings.  I’ve talked about German Splatter as a niche before, and all the traits that come with it: Demonic possession, campy acting, bodily fluids, decapitations, eye gouging’s, genital mutilation, the cynicism, the dark comedic undercurrents, and profound nihilism, child deaths -I didn’t know one could put squibs on toddlers - it’s all there. But for some reason there was more to this one than I’d noticed in earlier Ittenbach movies.

It’s possible that Ittenbach has always had these finer storytelling tricks in his work – well, I know that some of the basic ones have always been there – but I’ve never really seen them stand out like this before. No Reason (which could be somewhat of a trick title) really impressed me and definitely shined a whole new light on Ittenbach. 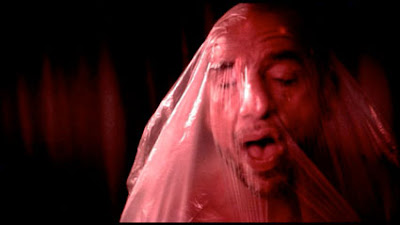 In short form I’d say that No Reason is a kind of Dante Alighieri’s The Divine Comedy inspired tale where Jennifer is forced through several layers of hell – the colour codes [Red, Green, Blue, Yellow to produce a final stage] – to find the true reason for why she’s submitted to this torture.  -While in this hell, she encounters the masked man, “the black one” as he’s called in the film who also has an obvious referent to H.P. Lovecraft with that Cthulhu inspired mask he wears. There’s also moments of Nakagawa Nobuo’s Jigoku, Clive Barker’s Hellraiser, Dante’s classic descent into hell and back, and the strong colour schemes made me think of Peter Greenaway’s The Cook, The Thief, his Wife and Her Lover. I also like the way that Ittenbach poses questions about life, death and the paths that we chose as humans. It’s also these colour schemes and the choices that lie therein that determine our fates in the after world in the philosophical discussions that Jennifer and the “Black Man” have. The strict colour lighting also gives a great effect as the tremendous violence of the RED level becomes so much more profound when the whole screen is saturated in deep red, and one can’t really distinguish gore from lighting. It creates an ominous effect. 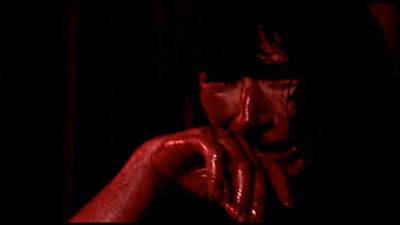 German Splatter films top trait is delicately prepared as home movie footage starts off the movie. This builds the “ordinary world” where Jennifer as a child has all the love, affection, concern that a child could possibly have, her parents have the best possible though of their child and have already dreamt up scenarios of what she’ll be when she grows up… this taints everything that we see with Jennifer from here on, as the movie starts with such positive boost of values.  It’s within the loving values of the parents dreams and ambitions for their daughter, contra what we know at the end of the movie, not forgetting the last harrowing minutes of No Reason, that showcase the wonderful cynicism that is a vital trait to the German Splatter genre! 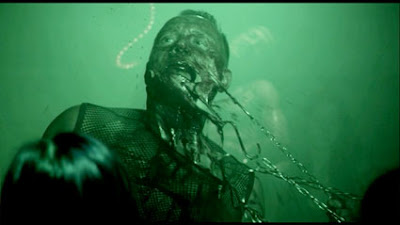 It’s a pretty strong movie, and unlike your regular German Splatter, this one does mess around with the viewer. I’d like to call it something of an empathetic head-butt, because we have been through this decent with Jennifer and have obviously become empathetic with her. It’s odd, as this rarely happens in German Splatter where characters are restricted to a few key scenes and then packaged with wraparound carnage and death. In No Reason, Jennifer is a physical participant in every single scene, hence the automatic effect that we empathize with her… and because she’s taking this ordeal for the noble reason of being reunited with her child.  By putting her through this ordeal with an item/object/totem of desire presented as the trophy at the end, one charges the search with positive value. It’ becomes a noble quest and we can empathise with the search, we want Jennifer to be reunited, we want her to be reunited so that we can get closure to the story being told. We want her to be reunited so that we can see why the reason of her ordeal. The human mind tries per automatic to solve, understand, interpret mysteries, questions, actions and events, and we also want answers to what, why and how Jennifer ended up in this scenario. 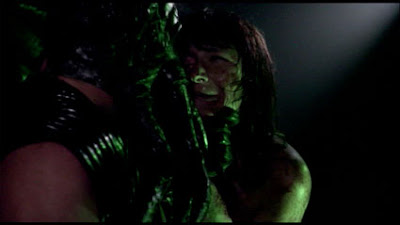 So when the last act finally comes around Ittenbach has been playing an emotionally sadistic game with us. But it’s a good one, and I liked it a lot, which is obviously why the movie get’s a high rating than the average German splatter flick. I hope this flirtation with deeper themes holds up and that we will see more of it in the films to come.

Another favourite corner stone makes an appearance in No Reason too, Guilt! There’s a reason why Jennifer is put through her ordeal, and I’d easily write it off as guilt. She’s well aware of her deeds in the past, and that’s why she ends up where she ends up, in a nightmarish state where guilt forces her to deal with her backstory. Again, it really liked it, and it certainly put a whole new spin on the way I look at Ittenbach movies from now on. 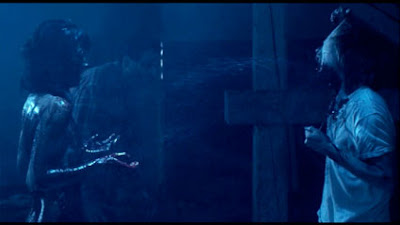 Irene Holzfurtner, who's naked practically the whole movie, does a fantastic job as Jennifer, all the angst and torment that is associated with post-war German cinema, is channelled right through this woman. Her pain leaves an impression, and I’m thrilled to see her slated for two Ittenbach films this year. Where the hell have the Germans been hiding this woman? The movie also features a last scene cameo from New Zealander Timothy Balme, who you should recall from Peter Jackson’s Braindead. 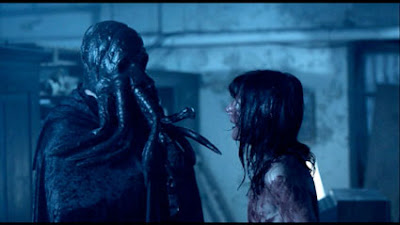 I have to tip the hat to editor Jonathan Martens’ disruptive and eclectic editing. Normally the whole philosophy of editing is to never let the audience feel, or become aware of the cuts, as it interrupts the flow. Being a former editor myself, I personally hate sloppy editing, as it’s quite often just a testament to idle hands. But when used as a style, a trait or a gimmick that works in favour of the movie, I’ll hail it unconditionally. After all, rules are written in order to be broken. So where the norm would crave straight continuous edits, No Reason, goes for the complete opposite when depicting hell and the blitzkrieg of edits really push the movie into hard terrain. With the deconstructive, flow interrupting style of edits the experience of watching the movie becomes even more uncomfortable. 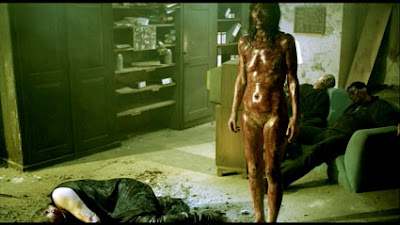 No Reason stands out amongst German Splatter. Within it’s realm it’s innovative, yet stays true to the traits that define the niche. The colour codes are an attention-grabbing device and one could presume that this is Ittenbach paying homage to the lighting schemes of Mario Bava and Dario Argento’s Suspiria. You need no reason to like the movies of Olaf Ittenbach. Really you don’t, you take them for exactly what they are, delirious pieces of violent cinema, with some outrageous effects and a fury unlike non other. No Reason has a really interesting narrative, which I find made this a well worthy of the time spent watching it. Such is the magic of Olaf Ittenbach, the unconquered Goremeister aus Deutschland!