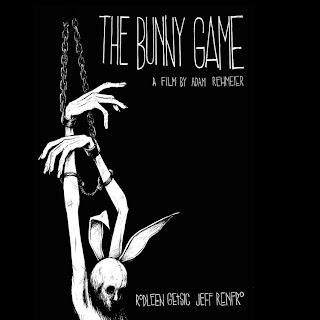 One film that specifically followed me through all of 2012 was Adam Rehmeier’s haunting The Bunny Game. I went back to the film on several occasions, talked to Rehmeier, re-watched it when it hit BluRay and can't recommend it enough. If you missed me rant on about The Bunny Game then check here, and here. I also mentioned in the first piece, the way the soundtrack plays part in the constant grinding tension that is The Bunny Game:

Up to the moment when Bunny enters Hog’s rig, the music, with the exception of one early Death Metal track, shifts from the mellow atmospherically ambient style of score to dronish growl. A dronevilish growl that will seep through most of the coming events that when the music stops and the soundtrack only consists of diegetic sound it amplifies the moment on screen and helps set the audience in the realism of the moment. When music is used in The Bunny Game, it helps build the tension, and I know it’s going to snap at any given moment.

It’s time to capitalize on the audio assault of The Bunny Game all over again, as the soundtrack is finally being made available.

Rising Beast Recordings is proud to present the official soundtrack release of THE BUNNY GAME. This all-new auditory experience was arranged, edited and sequenced by director Adam Rehmeier just for this release. 60 minutes of music from the film, expanded and seamlessly blended for a sonic journey that is cinematic in scope. Score by Adam Rehmeier. Includes songs by HARASSOR and additional score by James Brown III.

The main reason I want to plug this soundtrack is partially due to the fact that it’s a great film and a great soundtrack. But mainly for the simple reason that it’s going to be a rarity, and it’s being released on old-school cassette. I still have a cassette deck in my car, and I guess this will be required listening when drive out to my house in the woods.

Info on how to grab this highly rare item soon to be released by Rising Beast for an insanely low cost can be found in the links below.