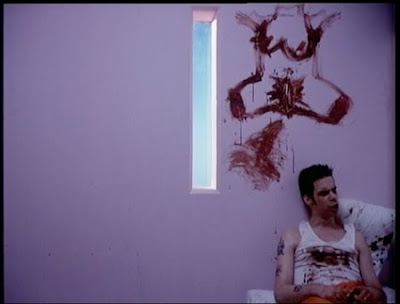 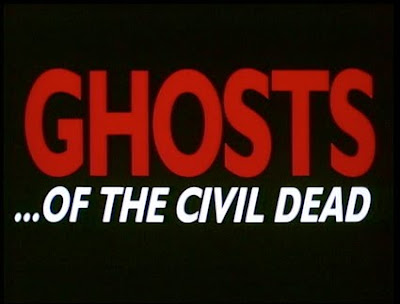 What:
John Hillcoat’s debut feature Ghosts… of the Civil Dead 1988. Not only did Cave star in the movie as the malign Maynard, he also composed the soundtrack with Bad Seed's band mates Mick Harvey and Blixa Bargeld. He even participated on the scriptwriting with Hillcoat and yet another Bad Seed, Hugo Race.

And:
Irish boy band Therapy? sampled Cave’s dialogue “Here I am Motherfuckers!” for the song Nausea on their 1992 album Nurse, making it one hell of an ominous opening track. And now you know why Cave had that short tight haircut for The Mercy Seat video!
- August 12, 2010

What a great and under-appreciated film. I feel like not enough people outside of Oz have seen it. Actually, speaking of "Oz", I reckon it was probably very influential on the TV show Oz (which I love too)...

Are you back from the woods now?

Yeah I'm back from the woods, thank god.

And Yeah Ghosts... is a really great movie. I still laugh like hell every time that great tattoo scene is played up.
I never thought of it, but I wouldn't be surprised if it did influence Oz.


I'd love to see Dogs In Space again sometime too. I have some fond memories of it at least. :)

I saw GHOSTS... at the old Scala Cinema Club in London around '88-89 and it did have its audience there at the time.

And I'm sure that the movie went down like a friggin treat in certain circles. I know I died the first time I saw it because I thought Cave just simply couldn't get any cooler...