The Ghost of Yotsuya 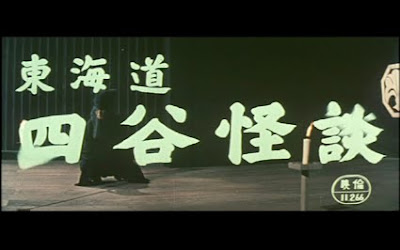 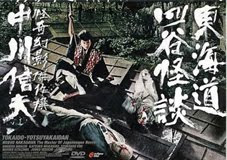 The Ghost of Yotsuya
Original Title: Tôkaido Yotsuya kaidan
Directed by: Nobuo Nakagawa
Japan, 1959
Horror / Drama, 76min
Distributed by: Beam Entertainment / Eclipse Films OOP
Did you ever wonder where all those traits that defined the past decade of J-Horror came from? Because you didn’t really think that Koji Suzuki, Hideo Nakata and Takashi Shimizu where responsible for the pale faced, longhaired drowned woman spectre did you… Nah not really, because what they did was simply tap into their own cultural heritage and more or less just revamp one of the oldest and most iconic images of their past legends and mix it up with some classic Western horror storytelling. 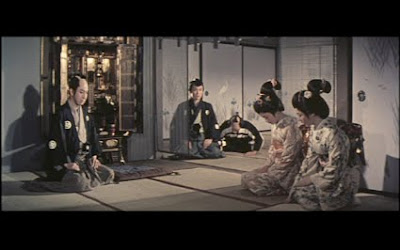 The masterful Nobuo Nakagawa’s The Ghost of Yotsuya shows exactly where the inspiration for his impressive piece comes from straight off the bat. There’s no hiding the source at all here as the movie opens just like if it where a taping of Kabuki performance. The candles are lit, the curtains are drawn and the performance begins. A young samurai – Iemon Tamiya [Shigeru Amachi who starred in several of Nakagawa's movies] begs Samon [Shinjirô Asano] for his daughter Iwa’s hand. Unfortunately Iemon’s reputation act against him, and Samon once again rejects the love hungry samurai’s request for marriage. But the apparent gruff between the two is rooted in a deeper, previous conflict and sick of being humiliated by the hash words and name-calling, Iemon draws his sword and strikes down Samon and his crew… the camera delicately pulling behind and past the trees of the set to spare showing us bloodshed at this early point in the movie. Iemon’s servant Naosuke [Shuntarô Emi] offers to take care of the bodies and then continues his moment, by framing Ozawa Usaburo instead when he reminds Samon’s daughters that Usaburo once tried to rob their father once before… The sisters decide to postpone marriage plans between the elder sister Sode [Noriko Kitazawa – also a Nakagawa regular] and Yomoshichi [Ryûzaburô Nakamura] whilst they take time to avenge their murdered father… 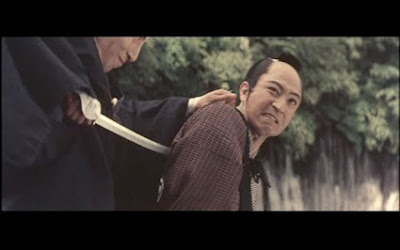 Again a baleful twist is presented when Iwa turns to Iemon and asks him to join them on their journey of vengeance. Along the way, a second even more sinister plan is presented, as Iemon and his sidekick plan to do away with Yomoshichi so that they can each take a sister as wife! Again Naosuke manipulates the women with his lies, blames Usaburo and suggests that the split up with one sister each – Iemon with Iwa as she is sick, and Naosuke with Sode - to take up the hunt for Usaburo… 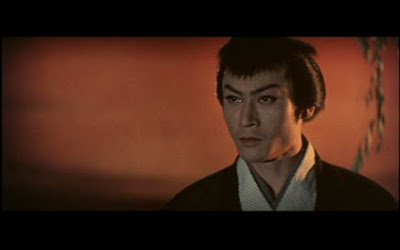 There’s almost a Shakespearean atmosphere holding the story in a firm grasp at this point in time. It’s a brilliant set up as the killer is appearing to get away with their murderous ways, and as an audience we are confused about who we should identify with as none of the leading male characters have yet to show any sympathetic traits. Time passes Iemon and Iwa now live in Edo. Iermon makes a living as a crafter of umbrellas and Iwa has given birth to their son. There’s a saddens and a bitterness in their relationship as Iwa misses her sister Sode and still awaits Iemon to avenge her father… still not knowing that it was he who slew him all those years ago. We also learn that Naosuke has more or less forced Sode into a complicated relationship where they pretend to married, but in reality she can’t stand him; although once vengeance is taken she has agreed to become Naosuke’s wife. 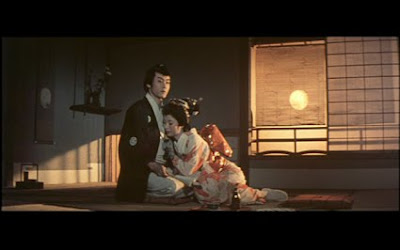 During a stroll Iemon stops a ruckus concerning a young woman and is rewarded by the Itô family for saving their reputation. Iemon falls head over heals in love with the daughter Ume [Junko Ikeuchi]. At home, Iwa’s constant complaining of the lack of funds, and the fact that Iemon still hasn’t taken the promised revenge, Iemon starts spending more and more time in te company of Ume. Iwa’s friend Takuetsu [Jun Ôtomo] alerts her to the facts of Iemon’s nightly activities with Ume, but Iwa refuses to believe him and rejects all rumours with a stern belief that Iemon wouldn’t do such a thing… Ohhh but he does, and once again it’s all due to the manipulative hand of Naosuke who reckons that it’s time for Iemon to move on up in the social ladder and their diabolical plan is set in motion… Frame Iwa with her friend Taketsu posing as her lover (every man has a price, even if the cash is coming from Imeaon) and then after renouncing Iwa, Iemon can wed Ume. 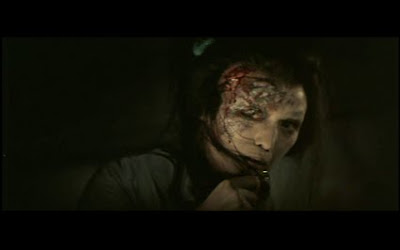 But it wouldn’t be viewed as classic piece of tragedy if there’s wasn’t some sardonic twist along the way. Taketsu can’t go through with the plan, and reveals Iemon’s evil scheme to Iwa, who at the time has already been poisoned by her husband. Iemon busts down the door, accuses Taketsu and Iwa, and slashes them both down with his sword. Moments later, Iemon and Naosuke dump the bodies in the swamp and Naosuke can’t contain his joy as they are now finally set to become rich. The movie shifts into its last act and that’s where the ghost part of the story takes a firm hold of the narrative. After her harrowing ordeal of poisoning, disfigurement and death, the spirit of Iwa returns to take her own vengeance on the men who did her so much wrong, and believe me they all get what is coming to them, as nothing holds a fury such as a woman scorned. 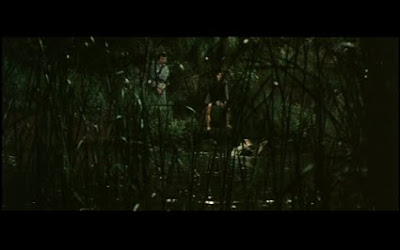 Nobuo Nakagawa’s The Ghost of Yotsuya is one of the definitive Kabuki ghost stories. Yes Kabuki, as this is where the Japanese horror has it’s roots - before Rampo Edogawa shook things up with his own style of Ero Groto that is... Since the 14th century the old theatrical art form Noh and Kabuki dealt with legend and folklore in one way or another. The Noh commonly used themes of ghosts out for revenge in the shuramono [ghosts] and shunen [revenge] genres, and the Kabuki had it’s Kaidan themes - themes of ghosts, mystery and horror. Within the Kabuki you find the two styles Wagoto, which tells romantic or comedic themed stories, and Aragot, which is the tougher variant that uses ghosts, vicious gods, demons and fearless warrior heroes. Mix them all together and you get the backbone of the Kaidan, the same ghost-horror-mystery stories that make up inspiration for the J-Horror genre. 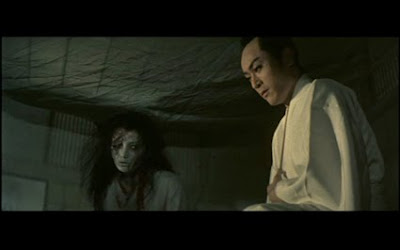 The Ghost of Yotsuya is based on the writings of Tsurya Nanboku and is one of the finest interpretations of the story which has been made into a movie some whopping thirty times. The first being Japanese movie pioneer Shozu Makino’s version from 1912. And it’s here that the legend of Oiwa and Iemon is first found, and it’s Oiwa that I’m calling the template for all drowned female ghosts to come. The terrifying disgruntled female spirit, back from the dead to claim her revenge. Her strong characteristics always hold the same image code – the weary eye, the wet hair draped over her face, the disfigurement – the same that Rampo would take further within his own niche – it’s a frequent reoccurring image in most of those J-Horror pieces. Ringu, Ôdishin, Grudge, Tomie, and so on. Images that we look upon as the image of modern Japanese horror even though the gore drenched grotesque revival has had a damned good run these last couple of years. 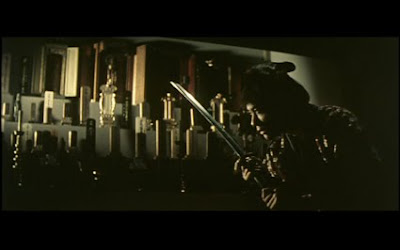 Nobuo Nakagawa should absolutely be considered the grand master of the Japanese fantastic genre. More than your average straightforward ghost vengeance pieces, his movies frequently use some superb subplots to drive the narrative beyond the common Kaidan. In The Ghost of Yotsuya it’s obviously the greedy and obsessive servant/partner Naosuke who seizes the moment of Iemon’s initial frustration and uses it to achieve his own goals the whole way through. He’s also the character who more or less acts as Iemon’s conscious, even though he’s committed crimes equally vile to Iemon’s. It’s a great use of subplot and supporting characters that can be seen in many of Nakagawa’s Kaidan pieces. 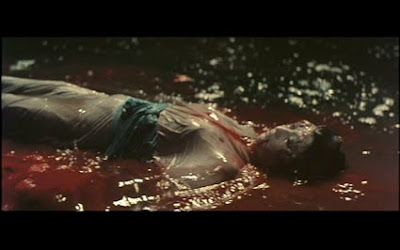 His movies are extremely well crafted; they look astonishing and deal with some great themes that where pretty controversial at the time he made these movies. One such is his classic Jigoku (Hell) 1960 which instead of painting an imaginary image of hell takes the audience right into the fiery bowls themselves and serves up some delicious pre-splatter gore effects that still work their magic. And another thing that always impresses me with each Nakagawa ghost story I see is that he really knew how to deceive the eye with elegant tricks. 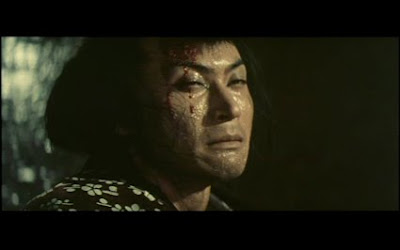 His ferocious style of editing and in camera tricks, which are very evident in his earlier movie Kaidan Kasane-ge-fuchi (The Ghost of Kasana Swamp) 1957 - which just like The Ghost of Yotsuya is based on classic Noh theatre - in The Ghost of Yotsuya, Nakagawa takes it up a notch, refines the traits he skilled himself at in previous movies, and also uses the colour schemes of his first horror in colour to shocking effect. Pasty blue grey spectres set against hard contrasting backgrounds that really have the compositions and imagery pop off the screen. It’s beautiful stuff indeed and very fitting for a masterpiece of Japanese cinema that comes highly recommended. 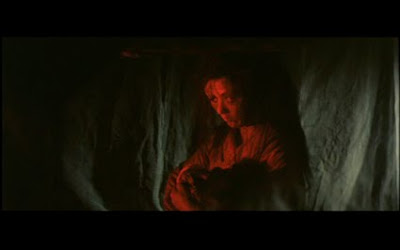 Another typically brilliant and full analysis by CiNEZiLLA. For more on the film and art history that influenced "Ringu" and other recent J-horror films, see "Sadako's Secrets" at http://www.jetaanc.org/ringu