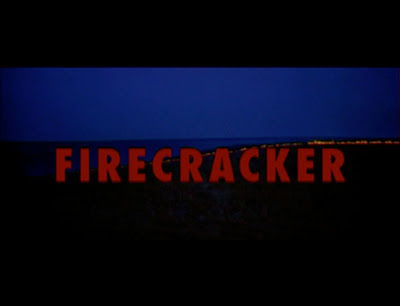 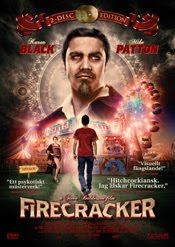 This is one of those movies that you will want to see, or wait - need to see, if you like the oddish stuff that walks the thin line between classical film and abstract strangeness. Steve Balderson, writer, editor, producer and director of Firecracker brings some great images, themes and ambience to his movie that is reminiscent of Lynch, Argento, Jodorowsky, The Coen Bros, Hitchcock and film noir classics. This is a movie I know I’m going to be going back to more than once in the years to come. 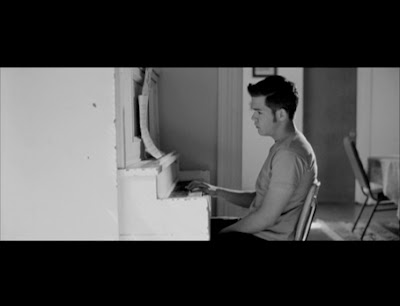 Set in a 50-60’s Kansas, Firecracker tells the story of a frail and delicate family with some severe issues that definitely make them the antithesis of the nuclear family. Two brothers, soft mannered, tender Jimmy [Jak Kendall] and his rough guy blue-collar brother David [Mike Patton] both live at home with their religious mother Eleanor [Karen Black] and their elderly father. 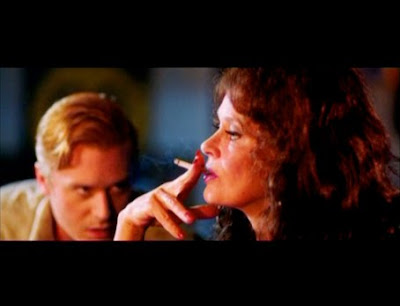 When a carnival sets up their tents in town, as they do once a year, Jimmy is drawn into the vibrant world of the carnivals girly show, where the beautiful Sandra [Black again in a double role] sings her songs and seduces the men. Jimmy is taken in by her beauty and sees her as a way to escape the torment of living in a house with a fanatically religious parent, and a very menacing and abusive older brother. The carnival goons notice Jimmy peeking into the tent and send him on his way. Later that night we learn that even David, Jimmy’s much older brother, had a night of pleasure with Sandra the previous year which resulted in a child, a child which Sandra’s horrifically jealous partner Frank [Patton in his second role of the movie] had some severe issues with. This is the introduction to the character gallery - five characters played by three actors that give some fantastic performances. 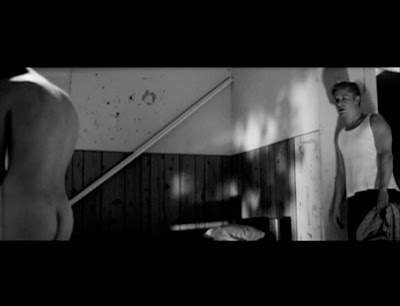 This all leads up to creating an intriguing, mysterious and captivating drama/thriller that uses the missing man mystery as its core. Town sheriff Ed [Susan Traylor] starts looking into the missing person case and it’s all setting up a pretty traumatic ride. And for once here’s an independent movie with that uses all of it’s subplots without a couple of them becoming filler along the way. I really hate when that happens and movies that end up with subplots not reaching the main narrative or climaxing in their own way. 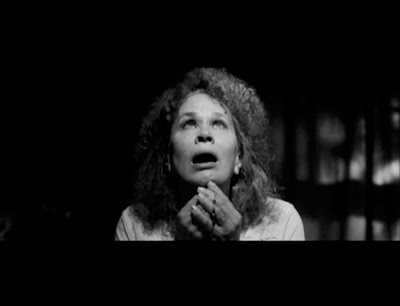 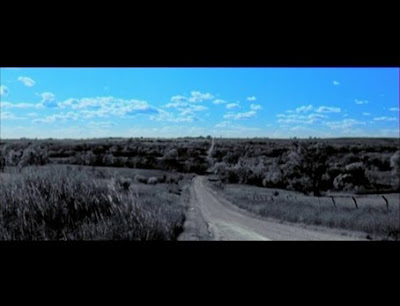 Shot on Super 35, Firecracker showcases some marvellous cinematography by Jonah Torreano and shifts between black and white to colour and back again as the various threads and plots move towards the climax of the movie. The black and white is what we can refer to as the ordinary world where the main narrative takes place and the colour is what we can call the imaginary world, or perhaps even the alternative real into which the people of the ordinary world want to become part of, a place where dreams can come true. But even in the colourful sphere of the carnival world there’s terrifying reality hidden behind the facade of the bright colours. You could say a pleasant place to visit, but a nightmare of wickedness and betrayal to those within. There’s also a neat supernatural element in the movie with Pearl [Balderson’s sister Brooke Balderson], the puzzling woman who lives under the tree between the two worlds, another subplot that is significant to bringing the movie to its culmination. 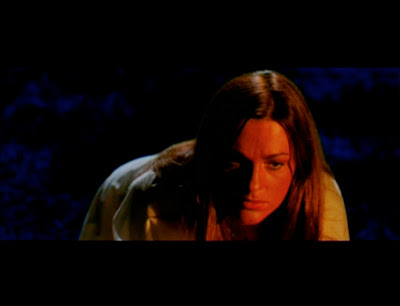 The shift in colour/black and white also brings layers to the subplots. Eventually the “dream world” is shattered as the ordinary world catches up with the characters. It’s also precisely when the subplots come to their climaxes and connect with the main narrative and the colour schemes are flipped over to the opposite realms. 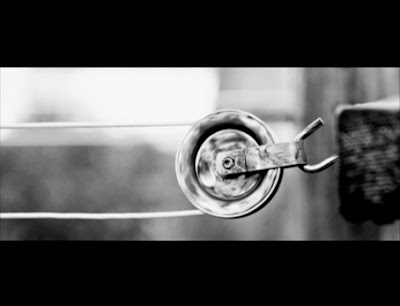 I’ve always said that a movie can get by just fine without a bombastic score telling it’s audience that “this is the shock moment coming up” or “it’s really exciting now”, if the director is telling his story in the right way. Firecracker holds one of those splendid moments where there’s a vibrant moment of suspense, and instead of bashing away with a score, Balderson uses the one key item in that scene that can bring it all crashing to the ground, the creaking sound of a washing line. It’s a fantastic example of how less is more in the best way. 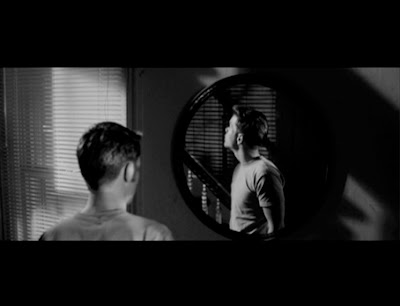 Based on a true story – which it is, it’s not a cunning device to lure us in, but for real - Firecracker makes for a fascinating story, that instantly draws the viewer in through the use of a slow motion opening sequence that drops just enough plot to awaken that important initial spark of curiosity that is needed to sweep us up off our asses and into the story. At one time Balderson had several big star names onboard for his movies, but fate had other cards up its sleeve for him. After loosing people like Dennis Hopper, Debbie Harry and Edward Furlong as well as an offer to hand the movie to Gus Van Sant, Balderson took the bold, but definitely right decision to walk away from Hollywood’s razzle and dazzle and made the movie independently on his own Kansas turf, with his closest family in key positions. This was a great move, because the movie with out any doubts reflects the vision Balderson had in his head. There’s no compromising with the material or themes and it shows, because there’s not really anything that feels out of place in the movie. Also by turning his back on Hollyweird, Balderson ended up with a fresh and magnificent cast that definitely are one of the key ingredients to making this movie what it is. 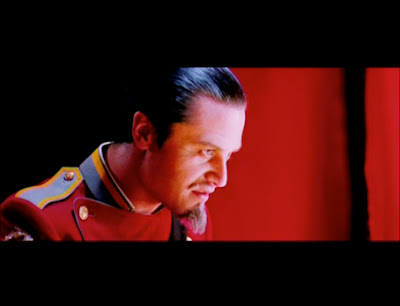 There are some actors in here that lift this flick high above good performances and into award winning performances not to be missed. I have to mention Mike Patton’s part first because playing dual roles the first time you participate in a feature movie is a ballsy move. Even though his two roles are pretty close in character, he still manages to make them differ from each other. Where David is menacing, Frank is terrifying and Patton makes it work. I’m not sure but I get the feeling that all Frank’s dialogue is out of sync, which brings a really creepy effect to his scenes. 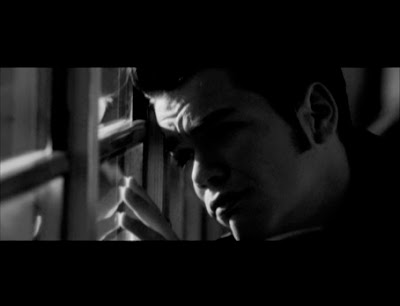 Jak Kendall is superb as the love sick, confused and guilt ridden Jimmy. He brings a vibe of James Dean, Chet Baker and that melancholic innocence of the fifties to the part. Susan Traylor is awesome as Sheriff Ed and each scene she is in is movie magic. I’d easily watch a spin off movie about that character, because there’ something fascinating about this small town sheriff who only has one gun in her department. 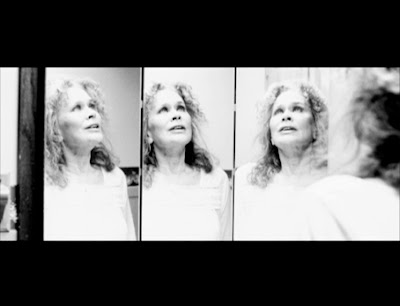 But the crown jewel of the movie is undoubtedly Karen Black. Black completely owns this movie completely. For me she’s always been the star of Dan Curtis Trilogy of Terror 1975 and Jack Nicholson’s object of hatred in Rafelson’s Five Easy Pieces 1970, but from now on I’m always going to be thinking of her as the shining star of Firecracker. The contrast between her parts could easily have been two completely different actors, but it ain’t, it’s Black giving what might be the best performances of her whole career. The burlesque singer Sandra has an aura of faded flamboyancy to her character. She comes of as a strong character to start with, but progressively we learn that she’s a scarred, damaged woman who finds strength in Jimmy’s naïveté. Eleanor is frail and guilt ridden for several reasons, one being giving birth to that second child Jimmy so late in life. She's a complex character who is difficult to ignore when watching. On one side she is terribly empathetic, and on the same side feel her cracking at the seams and loosing it all. When she momentarily looses her faith and ignores the ritualistic grace before dinner, you can literally hear her world come crashing down around her. It’s a spellbinding performance that deserves more attention than the few festival awards that she got for her part. 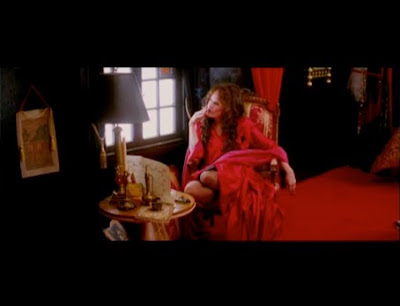 This is a fantastic movie that comes with the most sincere recommendation. Balderson’s Firecracker really impressed me in many ways, and I’m definitely going to hunt down his later movies to see how he followed this masterpiece of independent cinema. 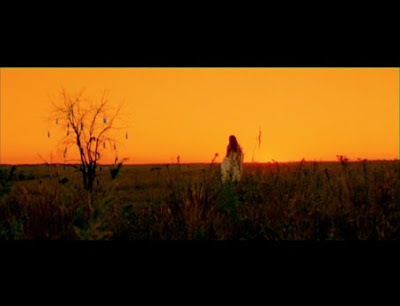 Image:
Anamorphic Widescreen [aspect ratio 2.35:1]
Audio:
Dolby Digital 2.0 Stereo. English dialogue with optional Swedish, Finnish, Norwegian or Danish subtitles.
Extras:
It’s actually wrong to call the second disc on this NjutaFilms release an extra feature, because it contains the full documentary WAMEGO that tells the story of how the movie came to be and how the journey was completed. There’s a commentary track with Balderson, and a bunch of deleted scenes and outtakes. Finally there’s the Njuta Films trailer reel that once again shows the versatility of this great company.

I have wanted to see this movie for years. As a kid I was a huge Patton fan. My Patton related CD collection was well into the 70s at one point.

But for one reason or another I got around to it. Now I might just have to! thanks.