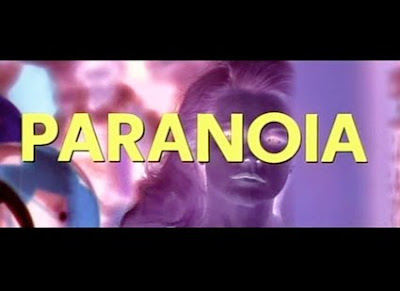 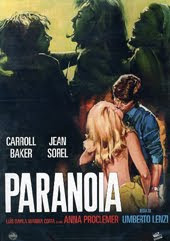 Wrapping up the loose trilogy of Jet-Set thrillers starting with Così dolce… così perversa (So Sweet… So Perverse) and Orgasmo, both 1969, the series comes to an end with Carroll Baker in her third flick for Umberto Lenzi. The suave, mordant and enthralling Paranoia. 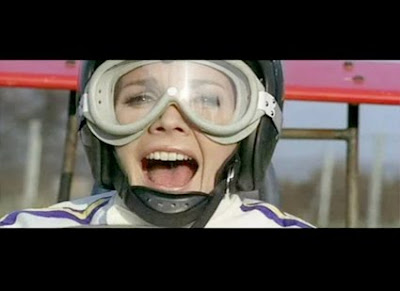 Once again relying on Boileau-Narcejac’s novel Celle qui n’était plus (The Woman who Was) which also inspired Henri-George Clouzot’s Les Diabolique 1955, Hitchcock’s Vertigo 1958, not to mention a shit load of other Euro Thrillers including Lenzi’s two previous instalments in the “trilogy “, Paranoia may just be one of the finest adaptations to be inspired by that story and previous movies. Building not only a destructive threesome, the team of writers – including Bruno Di Geronimo (Gianfranco Mingozzi’s Flavia, la monaca musulmana (Flavia, the Heretic)) 1974. Marie Claire Solleville, who also wrote on Orgasmo, and Marcello Cosica who participated on one of my all-time fave zombie flicks, Jorge Grau’s Non si deve profanare il sonno dei morti (Let Sleeping Corpses Lie) 1974 and the screenplay to Mario Bava’s La maschera del demonio (Mask of Satan) 1960, put a twist on the story that actually had me going off track a few times. Which was surprising, unexpected and highly entertaining. 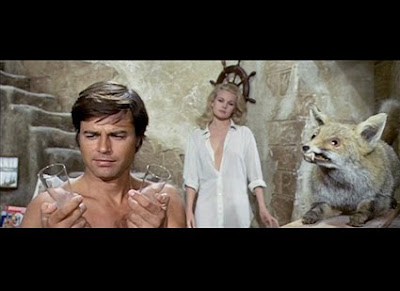 Helen [Carroll Baker] is a filthy rich, jet setting race-car driver who belts prestigious vehicles around the tracks at deadly speeds. After a somewhat serious accident she’s put in hospital all banged and bruised. She may be suffering from slight amnesia, this version is in Italian without subs, so I’m not with it all the way during the set up, but I’m going with the amnesia thread as that works better for the movie. Anyways she’s discharged from hospital and goes to rest along side her ex-husband Maurice [Jean Sorel] and his new sugar momma Constance [Anna Proclemer], who mysteriously invited her there to recuperate at their residence. The atmosphere is tense and the threesomes don’t quite know how to approach each other in this somewhat awkward scenario. Despite being divorced, Maurice still makes moves at Helen, and an effective flashback showing Helen and Maurice back at the breaking point of their relationship – a beautiful slow-mo scene where Maurice wrestles a gun out of Helen’s hand, which somewhat supports the amnesia theory as she wouldn’t be there if she’d recalled the bad ending. 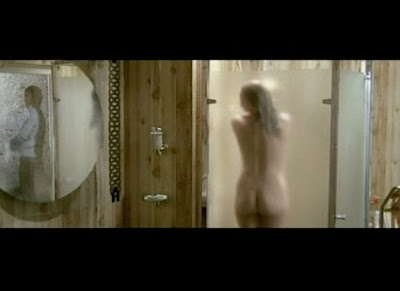 After establishing what we suspect is the set up – Helen and Maurice wanting to get back together and Constance being in the way, there’s the obligatory scene of Carroll Baker in the shower peeked upon by not one, but two characters, and the first of several sudden plot twists. Constance starts to flirt with Helen, and there’s a fantastic scene of Helen trapped in a seductive game of footsie where both Constance and Maurice are working her legs and feet. Some nights later when Maurice comes home drunk, Constance suggests sinister plan to Helen, which would see her assist Constance in the murder of most likely cheating bastard Maurice. This also evokes flashbacks of happy times when Maurice and Helen where still in love, and it makes for a neat twist as it see’s Baker slowly falling into a state of disorder as she’s torn between her love and hate for Maurice. There’s a couple of classic deceptive moments as we now are lead to believe that Constance and Helen are going to off Maurice, but when push comes to shove… Obviously there’s a last minute spin and Helen doesn’t have courage to harpoon Maurice, and things take a completely different turn. 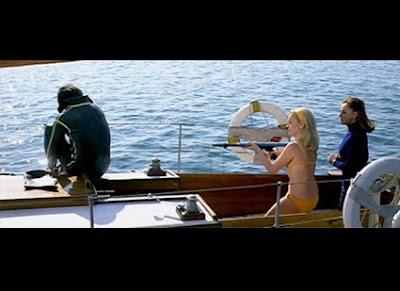 With Constance "out of the way", it looks as Maurice and Helen are safe on route to getting it all back together again, but… and there’s always a but, their happiness is threatened when an attorney friend of Constance, who always has his movie camera with him, starts to ask questions about accident that took Constance life. The suspicion and persecution starts to drive Helen round the bend – which to be honest has been done three times by lenzi and Baker at this time – and to make things worse, Constance daughter Susan [Marina Coffa] arrives and wants’ to know what happened to her mother... and finds her mother's husband being intimate with his ex wife! 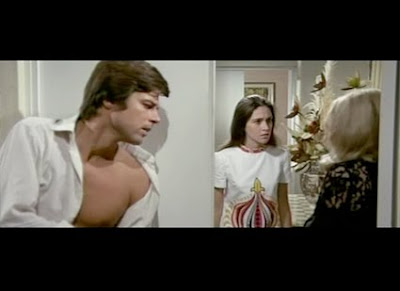 It’s quite apparent that Umberto Lenzi started toying with the sadism that would become something of a signature trait of his here. There’s a lot of drawn out moments of mental torture like waiting for a corpse to be emerged from the sea, possible evidence on a reel of home movie, and constant suspicious stares. It all comes together wonderfully as editor Enzo Alabiso draws out the edits to the maximum, creating some immensely tense moments. It’s no wonder that Helen slowly goes insane considering the sadistic mind games that are played at her expense. Much like in previous instalments. 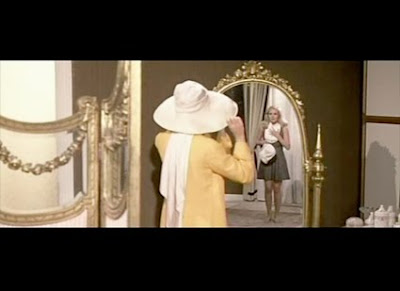 Anyways, back to the flick, where Susan wanders the same house as Helen and Maurice, after all it is her mother Constance house, and stats her own investigation into the mysterious accident that supposedly took her mothers life. Helen who in-between bouts of frustration and paranoia takes to snogging and shagging Maurice to keep her mind off the guilt that torments her, still has a harrowing surprise, shock and twist sequence left before the movie comes to it’s closure. 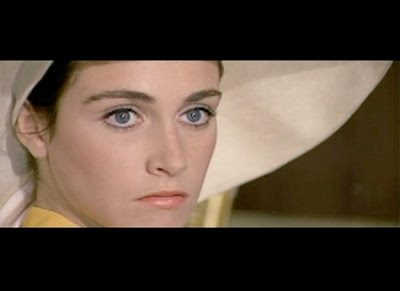 A common trait for all three movies in the “trilogy” is that cinematographer Guglielmo Mancori has something of a fetish for mirrors and composing frames within the frame. It’s not a bad thing, quite the opposite, as it treats the audience to some fantastic moments and at least once in each movie there’s a splendid illusion that a dead character is in fact alive. Something that lies close to the main device of these three movies – who is fooling who, and more than often with a rather cynical dark ending. It’s also noteworthy that Aristide Massaccesi (Joe D’Amato) worked as Mancori’s camera operator on Paranoia, just a few years before he started directing movies of his own. 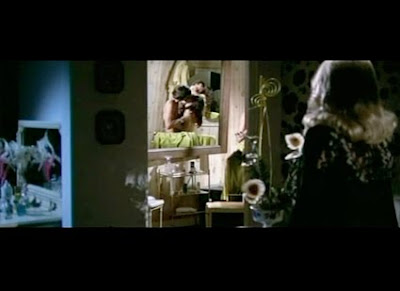 Being a Spanish/French/Italian co-production, Antionio Ramírez – who edited several Leon Klimovsky & Paul Naschy flicks – accompanied Enzo Albasio in the editing. But that editing is still as ferocious as ever, and goes hand in glove with Mancori’s superb cinematography. Much of the same hard, almost violent editing style that was found in Orgasmo, and later in Il cotello di ghiaccio (The Knife of Ice) 1972, is seen here.
Gregorio Garcia Segura’s score (directed by Piero Umiliani) is groovy and sounds more like a cheaper companion part to Orgasmo than anything else. It even goes as far as reusing the rock act Weiss and the Airdales performing Just Tell Me once again in a club setting much like the one in Orgasmo. 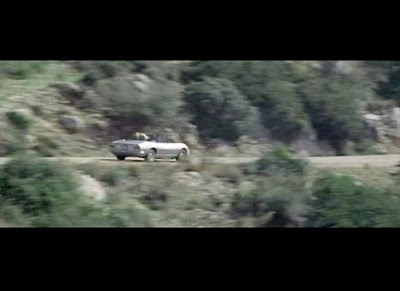 Paranoia neatly wraps up the loose trilogy and sees some interesting traits evolve from the suite. The three movies showcase a progression of Umberto Lenzi traits that he’d later push further with the thrillers and several Gialli to follow. It’s also a treat to see Carroll Baker and Jean Sorel teamed up again as Paranoia with Romolo Guerrieri’s Il dolce corpo di Deborah (The Sweet Body of Deborah) 1968 are the only two movies they starred in together. Umberto Lenzi would follow Paranoia with a seedy sexploitation thriller – Un posto ideale per uccidere (Oasis of Fear) 1971 before starting off his fascinating string of fascinating Gialli that would definitely have him make his mark on the genre scene.

Here's some freaky opening titles with some suave music for you to enjoy.