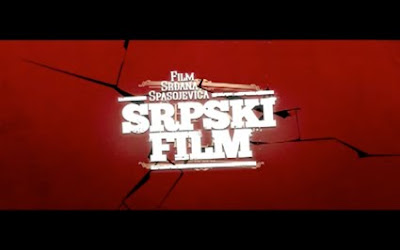 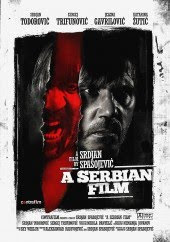 A Serbian Film
Original Title: Srpski Film
Directed by: Srdjan Spasojevic
Serbia, 2010
Horror/Drama, 104 min
Distributed by: CCV in a near future…
You really didn’t think I’d let 2010 go by with out a reflection on what might have been the most provocative movie of the decade did you?
Well no, I wouldn’t. Like many other small time, backyard filmmakers that we never even heard of before they broke through with magnificent and impressive behemoths of obscenity and violence; like Alexandre Aja and Haute tension 2003, David Moreau & Xaviers Palud and Ils (Them) 2006, Greg McLean and Wolf Creek 2006, Alexandre Bustillo & Julien Maury and À l’interieur (Inside) 2007, Pascal Laugier and Martyrs 2008, Tommy Wirkola and Död Snö (Dead Snow) 2009, Kôji Shiraishi and Gurotesku (Grotesque) 2009 (which was also Banned in the UK), the Japanese new wave of cybersplatter with Yoshihiro Nishimura, Kengo Kaji and Noburo Iguchi, Gareth Edwards and Monsters 2010, Simon Rumley and Red, White & Blue 2010, and on and on and on, it’s been a very potent decade. But still jus t like all those names, very few had ever heard of Srdjan Spasojevic before his gutchurning Srpski Film started making people faint, puke and cry in festival cinemas throughout the world and became yet another in a long line of movies to get some great publicity when the BBFC stick their foot in their mouth and condemn the movie to a series of extreme cuts.
If you have been living under a rock for the last six months here’s a spoiler free quick fix to send you on the way.
Despite a happy marriage and children, Milos [Srdjan Todorovic], still misses the good old days when he was Serbia’s number one porn star. When a former skin flick colleague tells him about an offer to participate in a special art project, he starts to toy with the idea of returning to the scene. After director Vukmir [Sergej Trifunovic] offers him an obscene amount of money to get his dick out for arts sake, Milos decides to zipper down and get back into action. Obviously there’s going to be a twist, and it comes after a painfully slow build through the first third of the movie. I’ll get back to that build, because there’s some noteworthy stuff in there. 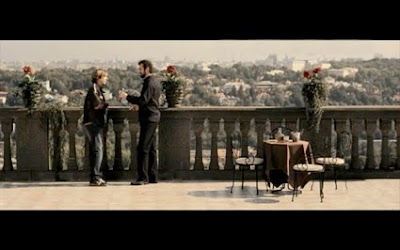 The presence of an obvious underage girl has Milos questioning the project, and that’s more or less when the shit hits the fan as Vukmir shows Milos what he exactly considers pure art, and the grotesque shock factor of A Serbian Film is a fact. From here on it more or less just churns on - Milos squeamish in front of the next scene Vukmir wants him to act in, and pumped up on horse tranquilisers and Viagra, Milos gets into the motion again and again and again. Rape, murder, necrophilia, paedophilia and on and on and on… the spiral goes deeper than any movie has gone before…
Yes, A Serbian Film is a provocative movie. Yes A Serbian Film is a rough ride. Yes A Serbian Film is disturbing. Yes A Serbian Film will get inside your head. Everything that you have heard about this movie is true, and it will undoubtedly disturb you when you see it, because it does push the envelope a fair bit further than it’s been before.
A Serbian Film is a movie that polarises me. There are some things in this beast that I actually found to be good craftsmanship and then there’s the other stuff that I found to be simply filler material. There’s a great dark, profound story in there somwhere, and that I like, but I feel that the extreme sexual content is filler.
Let me put that into context.
In the last third, something happens in the movie. Something that has Milos stood looking in a mirror, bust up, torn, shattered and really rough. From there on he tries to put together what the heck has happened. What road leads him here to this sudden awakening? Through flashbacks and a bunch of found D.V. tapes he starts putting the puzzle together – and yes there’s a few shocks waiting for both him and the audience along the way. And this part of the movie really drew me in. This was a genuine good dark thriller vibe going on and I was with it despite the god-awful build that I mentioned earlier. At this time in the movie it’s totally fair to compare A Serbian Film to stuff like Paul Schrader’s Hardcore 1979, Alejandro Amenábar’s Tesis (Snuff-Movie) 1996, Joel Schumacher’s 8mm 1999 or the transgressive movies of Canadian enfant terrible Karim Hussain – if you’ve seen his Subconscious Cruelty 1999, then you know what I’m referring to. 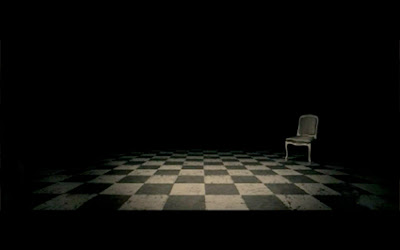 So that build then, well everyone, and I mean everyone is a complete bastard. There’s nobody to empathise with. Nobody. I mean it, nobody. Forget those reviewers who say that we get to spend time admiring Milos and how far he has come. Fuck that shit, Milos has come nowhere. He wants’ to get back into the porn business, and that’s clear as day. He’s just so immature that he doesn’t want to make the decision himself and let’s his wife – who works at the War tribunals in Hague – choose for him. And she let’s greed decide that she’ll let her husband go back to making fuck movies, and that’s not mentioning what she wants’ him to do to her in bed – perhaps not a characteristic, but it’s still of kilter. I can’t see any woman with a brain in her head ask her former porn star husband to treat her like he treats the women in his movies. Then there’s Milo’s brother, who is a complete bastard, and a cop who will figure throughout the movie, the demonic Vukmir, his henchmen, Milos old porn mates… and so on it goes. There’s really nobody to feel empathy for or with, not even Milos son. There’s nothing in their journey so far that makes me give a shit to be honest.
So what the heck makes me finally start to feel something for Milos after that bathroom scene? Well I’d say that it’s my own moral values that make me want Milos to get the fuck out of the death trip and save not only himself, but also his family. It’s gone to far and even Milos who has been up for anything so far has reacted – and even more we will see as the puzzle comes to a conclusion. The only way from there is up, the only way out is redemption, and along the way there is some kind of moral justification and revenge is taken in it’s own screwed up way. Srdjan Todorovic (Milos) – who has starred in several of Emir Kusturica movies, is incredible as Milos. He’ll never get one, but he should win some award because he really gives a performance that is hard to challenge here.
Looking at the movie technically is also an aspect that has to be taken into the equation, because it is a damned well made movie. All the provocative scenes are shot in angles where you do not actually see what you think you are seeing. The editing comes together in such a way that it all becomes an illusion. Spasojevic has created a movie that moves along the lines of Alfred Hitchcock’s Psycho 1960, Tobe Hooper’s Texas Chain Saw Massacre 1974 or even Takashi Miike’s Koroshiya 1 (Ichi the Killer) 2001. All those movies have scenes of extreme violence, but actually don’t show you what you think you saw, be it a knife going into the naked skin of Janet Leigh, a meat hook poking out of the chest of Terri McMinn, or Paulyn Sun’s nipples being sliced off by a razorblade wielding Tadanobu Asano. You may think you saw, but you didn’t. Which also leads me to that “shock” ending. Considering what has gone before, that’s a pretty tame ending, as the time for being suggestive is way past gone. 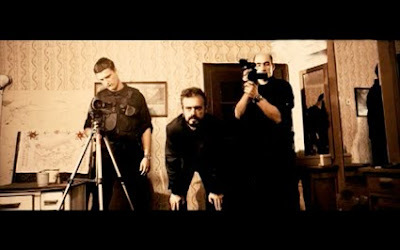 So, I can’t help but feeling that the shocking and taboo breaking moments of this movie actually do more to harm it, than actually work in it’s advantage. I feel that some moments are possibly uncalled for, and I don’t agree with them, but that’s just my filter perhaps, after all these movies are supposed to offend and provoke or else they aren’t doing their jobs. To be honest certain moments really feel like movie special effects when they are up there on the screen, and perhaps that’s a good thing when you come to think about it. But it’s a shame, as there is a good film in there but I find that it may have been lost to sensationalism.
The controversy that surrounds this flick is amazing marketing, but at the same time, these moments over the deep end is what’s going to make a lot of people choose not to watch the movie instead. And that’s a shame, because if Srdjan Spasojevic where to have made a movie where the disgust factor worked in favour of the movie just like in stuff like Martyrs, Grotesque or Heute tension, - where the violence and grotesque factor is a driving force within the narrative itself, he would have reached a wider audience and still have maintained the key result that A Serbian Film is going to have – launching his career in a franchise hell known as Hollywood. Because who wouldn’t want the man behind the “most disturbing movie” helming his franchise. I’m guessing that Spasojevic will be heard from again very soon – or if in some ironic twist Hollywood feels that he went to far and he never works outside of Serbia again.
Never the less, A Serbian Film is a hard movie to sit through. It is a movie that will scar you and make you question what the hell you are watching, and why? If you see, hear and feel the big screaming warning signs on the way down, well then pay attention to them them, because this is one disturbing movie and it’s not to be messed about with. A Serbian Film did get under my skin, it did affect me, it did have had me looking away on more than one occasion, but when it was over, it was over. I didn’t really take it with me in my consciousness afterwards. Not if you compare it to a movie like Martyrs, which had me mind-fucked for several days. So yeah, If you like extreme horror films then this is a movie that you should watch, you should be warned, but you should still watch it, because extreme horror movies are supposed to offend us, they are supposed to make us mad, upset or scared, they are supposed to pose rhetoric questions and make our skin crawl, get inside our heads and make us uncomfortable, and with that definition, then A Serbian Film is a movie fans of extreme horror should see. 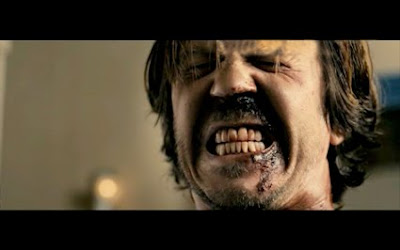 I'm also quite sure that scandinavian distributor CCV will get a lot of crap for releasing A Serbian Film. I wouldn't be surprised if there are voices raised to reinstate the censors again and quite possibly there will be a moral panic like the one we saw back in the eighties. We will soon know, as it will be released uncut in mid January 2011.
- December 31, 2010

Entertaining and thorough appraisal of the movie's merits.

Serbia is coming up in the world.

Fascinating in a different way.