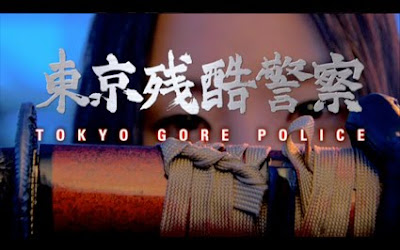 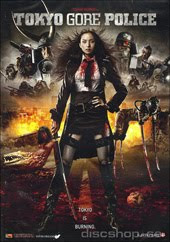 Kick-ass over the top supers stylized Japanese gore. I’ll tell you right now, that it doesn’t get any better than this. The wave of neo-cyber/splatter punk directors that are on the scene right now are definitely making sure that everyone interested in alternative cinema is directing their eyes at a hard stare back on Japan. 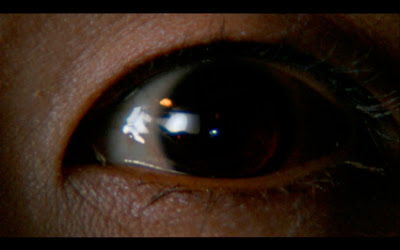 The movies that have been coming out of Japan these last years since J-horror tripped up in it’s own matted web of wet hair and pale chicks is completely outrageous. They are among the most fascinating stuff that one can watch if your after a quick fix of gore drenched entertainment with outrageous special effects. It’s wonderfully sinister, gory to the max, and is very reminiscent of the great gore wave of the eighties. 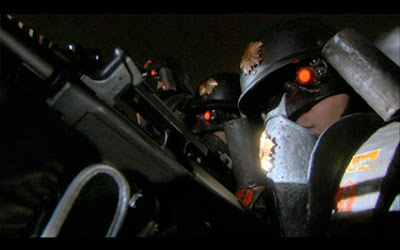 There’s something terrifically aesthetic about the way that Japanese directors portray their extremely stylish violence, since the ban on cinematic swordplay was lifted in the 50’s. Yes, in the post WW2 occupation of Japan the U.S. Censors imposed a ban on “nationalistic” movies hence forcing age old genres into obscurity. Well until they came back with a blood spraying vengeance a few years later. Directors and movies like Akira Kurosawa, Hiroshi Inagaki and Kenji Misui’s post war jidai-geki chanbaras, the great kaidan films of Nobou Nakagawa, Kaneto Shindô and Masaki Koboyashi, the gritty sixties and seventies pop crime flicks of Toshiya Fujita, Koji Fukasaku, Seijun Suzuki, Kenji Misumi and Shunya Ito, the new wave of Shinya Tsukamoto, Sogo Ishii, Takashi Kitano the revival of kaidan with the likes of Hideo Nakata, Kiyoshi Kurosawa, Shion Sono, and Takashii Miike and even still relatively unknown directors like Sakichi Satô, Gen Sekiguchi and Higuchinsky all have it in common. Their movies are perfected works of stunning visuals and amazing style. One could easily freeze frame at any one point and there is a breath taking image on screen… this is one of the reasons why I constantly find myself being drawn back to Japanese cinema over and over again. They pack a punch, spray the red, and always look fantastic. 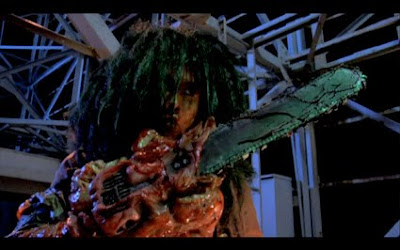 Tapping into the likes of Sogo Ishii and Shinya Tsukamoto’s cyber punk of the last decade, and the ferocity of Takashi Miike’s no holds barred action flicks; Tokyo Gore Police is set in a dystopian future world where the law has been privatized. There is no compromising with crime – it’s a disease and the Tokyo Police Corporation show no mercy. Young star cop Ruka [Eihi Shiina – star of Takashi Miike’s Ôdishon (Audition) 1999] is drawn into a nightmare world where strange scientist [Itsuji Itao] has created a killer organism, from concentrated serial killer DNA. He places the genetically engineered keys into people, and once these keys are in place they are transformed into Engineers – deadly killers set on bringing the downfall of mankind. 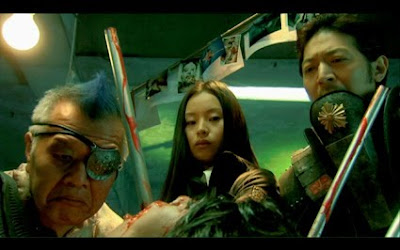 But taking out the engineer’s is a more complicated task than just sending in the cops, as for each wound an engineer sustains a new lethal weapon from the wound. This is a brilliant idea and brings some really amazing scenes to the movie – the alligator woman is easily amongst one of the most impressive creatures ever to be put on scene.
At the same time Ruka has serious issues stemming from her childhood – she was grimly traumatised when she saw her cop father shot at point blank in the head during a demonstration – this incident has Ruka taking her angst out on her self through self mutilation. But it’s also an angst that she shares with the lead protagonist The Scientist as their pasts are linked in several ways. 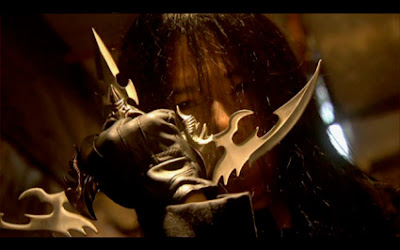 When the scientist starts killing victims as well – apart from creating new engineers – the police force lead by Tokyo Police Chief [Yukihide Benny] demands that the engineers be stopped at all costs when they start finding the scientists victims – drained from blood and cut up into parts left in cardboard boxes. Ruka is obviously set on the case and goes after the Scientist, but the closer she get’s the more she learns that they share similar backgrounds. After fighting the Scientist in the subway, and actually being defeated, the Scientist encourages Ruka to “remember it all” and then inserts a key into her… Ruka faces some real issues now when she, the top cop, also is infected and doomed to become an engineer! 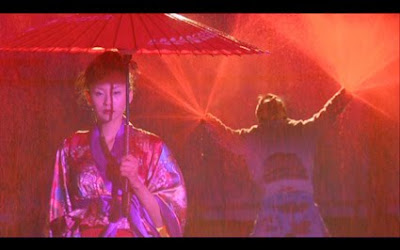 After fellow police officer is lured into a set up – which features the outlandish bordello and modified prostitutes, one which becomes the fantastic alligator woman - and turned into a diabolic engineer too, the Police Chief declares war on the engineer’s and Ruka – now with a foot in each camp has some shocking revelations ahead of her.
If you just want a taste of this film, then simply watch the opening sequence. I guarantee that it will shock you, seduce you and draw you right in. It’s packs a punch in the face opening like no other movie has for ages. And after setting up this fabulous tone, the movie starts exploring it’s narrative. There’s a great back-story that unravels throughout the movie and new information is put forth for each step closer to finding the lead engineer –Key man [Itsuji Itao]. Once he’s found, Ruka’s character has to revaluate her life as much of what she has previously thought to be one thing turns out to be a complete different one. There’s a wonderful complexity to the characters that really makes a difference. There are no simply good or bad characters, as they all hold both sides of the spectrum. Bad guys have very reasonable reasons for their actions and in some ways are acting in the name of good, and the same goes for the good guys who also are conducting foul deeds even if it’s in the name of good. It’s interesting and brings a density to the movie above the traditional linear narrative and classic archetypes. 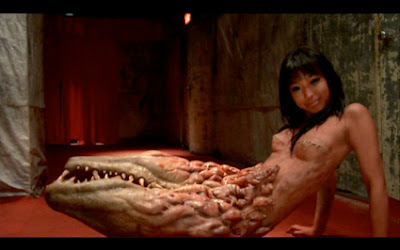 Design wise there’s a lot of great things going on here. Police cars are modified old SAAB’s with shrines attached to the top, the usual mixture of new and old Japanese style is found as the cops all have a kind of neo-samurai clothing, the schoolgirl outfits and geisha outfits are all there too. Clubbers sport some fantastic outfits obviously inspired by LeighBowery and the modified girls will blow your mind. Especially the police chief’s pet Dog Girl [Cay Izumi] who later has razor sharp swords attached to her stumps becoming an almost gazelle like combatant.
Yoshihiro Nishimura has been on the scene for a few years – he’s already directed a bunch of movies of his own, but he’s primarily been working on special effects on some of the most impressive movies to come out of Japan since the J-Horror wave. If you’ve seen any of Shion Sono’s splendid movies this past decade, then you’ve seen the stuff that Nishimura comes up with. 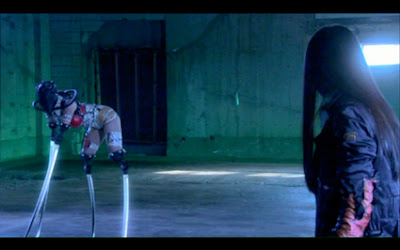 There’s a great Blade Runner (Ridley Scott 1982), RoboCop (Paul Vehoeven 1987), Neo-Chanbara - CyberPunk vibe to the movie and the hilarious TV commercials that blurt onto screen – just like Starship Troopers (Paul Verhoeven 1997) are great. The Wii like appliance is outstanding and will have you laughing your ass off. These short ironic infomercials where directed by Yūdai Yamaguchi and Noboru Iguchi. Iguchi who also directed the fantastic Kataude mashin gâru (The Machine Girl) 2008 on which Yohshihiro Nishimura provided special effects. It was also on that same production that Nishimura was approached with the request to make another movie. Looking back at his 1995 debut feature Genkai jinkô keisü (Anatomia Extinction) he decided that it would make a perfect source and together with Kengo Kaji (who also worked on Higuchinsky’s amazing live action adaptation of Junji Ito’s Uzumaki 2000) on the screenplay to Tokyo Gore Police. I would love to find out how long they spent on pre-production, as the shoot itself supposedly only took Two weeks! 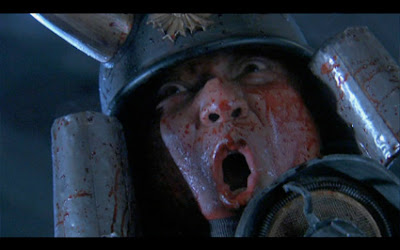 Nishimura still stays close to working the special effect on many of the movies within the Japanese gore horror genre, and has gone on to direct a few more films in a similar vain as Tokyo Gore Police – Kyûketsu Shôjo tai Shôjo Frankura (Vampire Girl vs. Frankenstein Girl) 2009 and Sentô shôjo: hi no tekkamen desetsu (Mutant Girls Squad) currently in post-production. Hopefully he’ll soon get back to the Gore Police with the sequel that is promised at the end of Tokyo Gore Police, as I’ll definitely be up for that one.
Tokyo Gore Police is a great movie, its extremely violent, grotesquely funny, has a great narrative and some outrageous designs that make it a fantastic piece of Japanese cinema. It’s a definitive must see movie that you need to check out as soon as possible if you haven’t seen it already because there’s a valid reason that this movie won the Best Asian Film award at the 2008 FantAsia Film Festival. It simply rocks supreme. 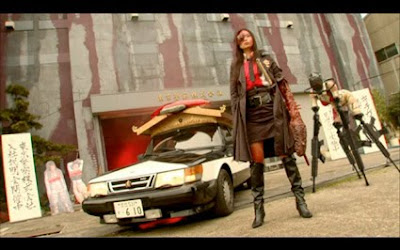