And Now The Screaming Starts! 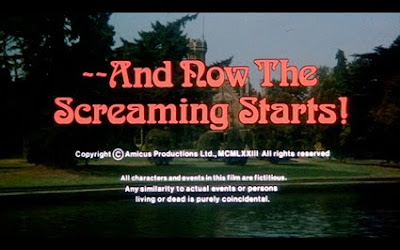 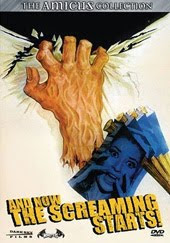 There are three reasons that I love this little piece of English Gothic Horror Tackiness:
1. I really enjoy simple little movies made by Hammer and Amicus
2. I’ve interviewed David Case who wrote the book it’s based on.
3. I spent a night at Oakley Court where all exteriors are shot. 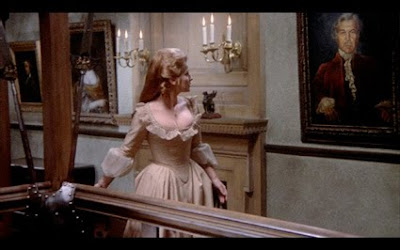 I’ve been nursing a profound desire to see this film again since I my mate Steve and I interviewed author David Case at the World Horror Convention 2010 in Brighton, England just a few months back. Case is a fascinating author who has written more than 300 books in just as many genres. Westerns, Porn, Sci-Fi, Horror you name it, Case wrote in it. At a grand age of 73, Case is still very much alive and kicking and a true grand old man of the genre. Not only does he get up at six in the morning and write all day at his typewriter stood on the mantelpiece – just like Hemmingway – he actually still writes some amazing stuff and recently released the splendid Pelican Cay and other Disquieting Tales, an anthology of his later works. Case has been around for so long that he refers to Zombies as Ghouls, not the pop cultural shuffler we know as the Zombie, but Ghouls - the real undead stalker. That’s what you get when you started writing books some four decades ago and can boast authoring more than three hundred stories. And it’s among that massive output that the novel Fengriffen can be found. 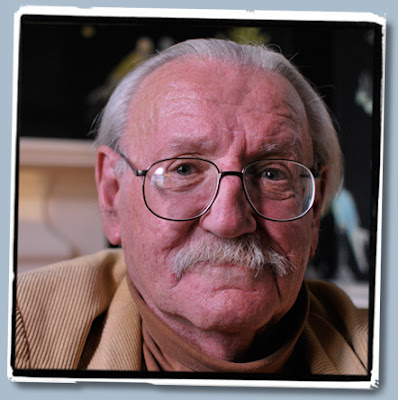 The Great and Entertaining David Case!
Roger Marshall, who also wrote Roy Boulting’s Twisted Nerve 1968 with that smashing whistling theme Georgie, composed by Bernard Herrman and used by Tarantino in Kill Bill: Vol.1 2003, based his screenplay on the Case novel, and that’s what then became Roy Ward Baker’s second feature for Amicus Productions; And Now The Screaming Starts! 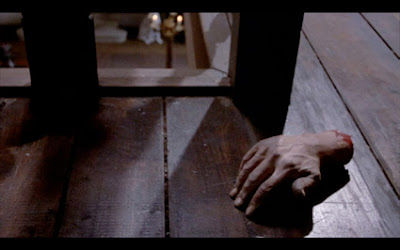 Set in the 1795 (unlike many other Amicus films, as they where commonly set in modern time) the newlywed couple Catherine [Stephanie Beacham] and Charles Fengriffen [Ian Ogilvy] move into the Fengriffen castle. But happiness is short when Catherine starts to feel a strange presence, stemming from that large painting of Henry Fengriffen [Herbert Lom]. After a series of pretty neat on-set effects and a few eerie moments, including a very suggestive ghost rape sequence, Catherine more or less looses it completely and Charles questionings her sanity. After a dizzy spell climaxing with screams of insanity to many the couple are told by Dr. Whittle [Patrick Magee] that she is with child… 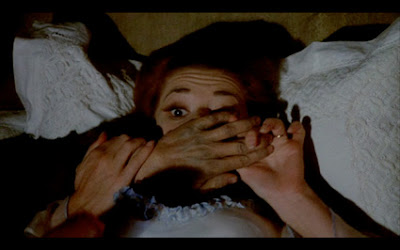 Learning that Catherine is preggers the household staff start acting up, and Catherine pretty soon understands that they are all hiding something form her and Charles, worried sick for his wife whom he thinks is going insane, begs Dr. Whittle for help. Realising that there’s nothing more he can do for Catherine, he suggests asking his friend Dr. Pope [Peter Cushing] to come up from London and see what he can do for the unfortunate woman. Cushing arrives just past midpoint and gives his usual brilliant “all in Cushing” performance. Cushing more or less forces Charles to tell the truth of the Fengriffen background, and he starts telling the story of his decadent grandfather Henry Fengriffen (finally seeing Herbert Lom make an entry into the narrative, this time in the flesh and not just on canvas.) 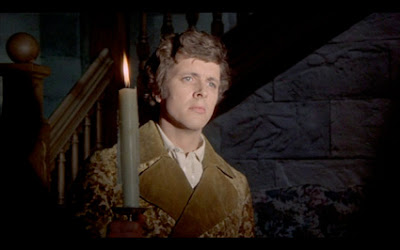 Henry Fengriffen obviously turns out to be a right bastard and his sardonic acts towards Silas the yardman [Geoffrey Whitehead] in the past still have consequences now. Catherine gives birth to a fine son with the aid of Dr. Pope, but there’s still one sinister shock in waiting as Charles looks upon his newborn son. Thunder and lightning set an brooding atmosphere as Charles rushes into the movies climax, determined to set things straight once and for all, as the Fengriffen curse must be broken. 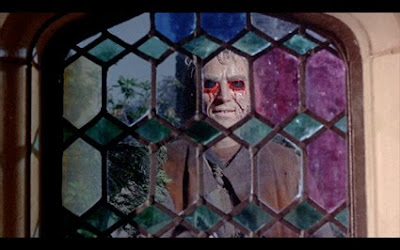 And Now The Screaming Starts! is one of the better Amicus films – not to say that the others are bad - it’s just that this one stands out from the others. Possibly because it’s one of the few with a full feature narrative and that it’s set in modern time - not to be confused with the sci-fi output they produced, like the Gordon Flemying directed Dr. Who movies [1965-1966] starring Peter Cushing as the Doctor. And Now The Screaming Starts! has got some really impressive on-set effects like hands pushing through paintings only to be whole after the camera returns, neat little effects like the motorized decapitated hand that drags its way back and forth, and great sets. There’s something about getting outside and using those great locations that Oakley Court offers that bring a real value to production. 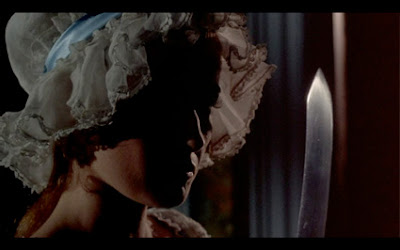 Amicus Productions where set up by two yanks, Milton Subotsky and Max Rosenberg in the early sixties. Both of them had pasts as screenwriters and producers; Rosenberg even produced Terrence Fisher's groundbreaking Hammer classic The Curse of Frankenstein in 1952. They started up Amicus as a counterpart to the legendary Hammer Films, but instead of making movies in the same vain as Hammer, they commonly set their movies in modern time, and also frequently had several shorter stories to each film. Classic horror anthologies in other words, just like their “greatest hits” fares, Dr. Terror’s House of Horrors 1962, Tales From the Crypt 1972 and The Vault of Horror 1973. Even though many of them did star Hammer actors like Peter Cushing and Christopher Lee and where directed by people like Roy Ward Baker, Seth Holt and mainly Freddie Francis – all Hammer directors too. Although they never released anything near the amount of films that Hammer did, they did release a bunch of really atmospherically stuff that makes up for great late night entertainment. Just like those great Hammer movies. Built in 1859 the majestic Oakley Court with its gothic setting saw it’s fair share of glam and celebratory guests during it's first hundred years of existence. During the Second World War it was used as the headquarters for the French Resistance and even Charles De Gaulle supposedly stayed there as the plans for the next moves of the resistance where made. After the war the building was kind of neglected and started deteriorating. During the late sixties, until the end of the seventies, Oakley Court was a gutted mess, an abandoned building with out interior or even a roof any longer, and was therefore a perfect setting for movies shot at the nearby Bray Studios. 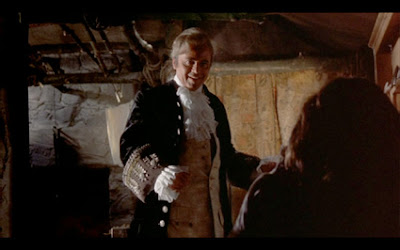 Many great Hammer flicks where shot there, Terence Fisher’s Dracula 1958, and The Curse of Frankenstein 1957 and John Gilling’s Plague of the Zombies 1966 to name a few, as well as several other independent films, like And Now The Screaming Starts!, Richard O’Brien/Jim Sharman's cult classic The Rocky Horror Picture Show 1975, and even José Ramón Larraz Vampyres 1974. So however you look at it, a trip to Oakley Court should be one destination that anyone with a love of horror cinema should take at least once during their lifetime. 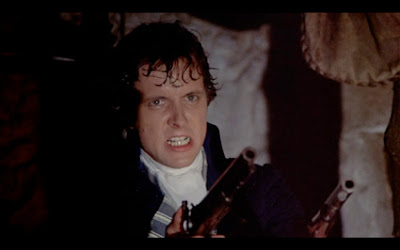 Make no mistake about it, And Now The Screaming Starts! is a great little movie, a splendid piece that’s actually quite effective is pretty eerie at moments and holds a great atmosphere. It’s a good old English Gothic horror like the ones they did so well during this time period. There’s a wonderful cast of brilliant actors, Ogilvy, Magee and Beacham who’s bosoms in no way could have been pushed up and out any more than here, not forgetting Lom and Cushing who bring their thing to the ballpark. Lom is wonderfully sleazy and Cushing is painstakingly Cushing, but you wouldn’t want it in any other way now would you. 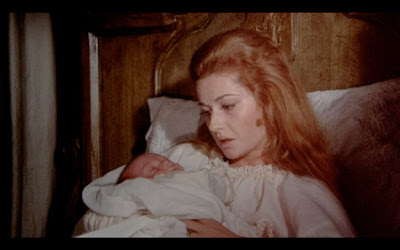 Extras:
Theatrical trailers for And Now The Screaming Starts, The Beast Must Die and Asylum. A photo gallery, cast and director biographies, and there’s also two separate commentary tracks. One featuring lead actress Stephanie Beacham and director Roy Ward Baker and one with leading man Ian Ogilvy.
- May 15, 2010