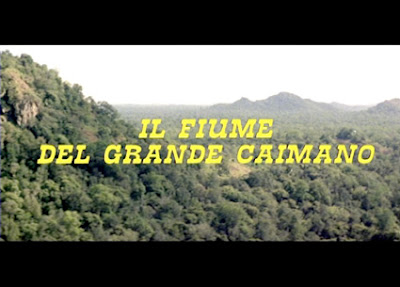 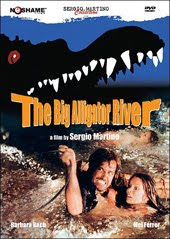 There’s something about mammoth sized “real” animals that take revenge on mankind movies that just doesn’t work for me, with a few exceptions of course. I can never really seem to get into them in the same way as a monster of the fantastic (i.e. Godzilla or Alien or Zombies) or something like a plague of smaller critters and all that stuff. But the big bastard lone predator never ever got under my skin. I saw Spielberg’s original Jaws 1975 when I was something like seven or so and I dared not go for a pee that night as I was sure that the head of that bloke who’s head floats up and scares the crap out of Richard Dreyfuss would float up out of the crapper and scare me to death. See, it was the human element and not the big shark that got to men that time, and that’s quite the way it’s been since then. 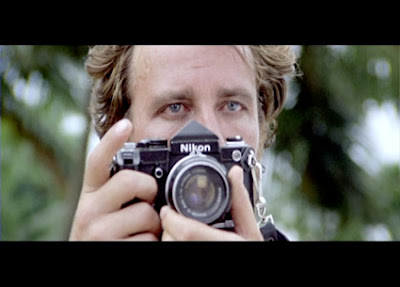 Saying that, Sergio Martino’s The Big Alligator River hasn’t got the best starting position when I finally settle down to watch it. But it’s not all bad. Sure it’s pretty slow, has an obvious Jaws complex, and a strange subplot with alligator worshiping natives that decide to kill humans that never really get’s explained in a proper way. It goes something like this… 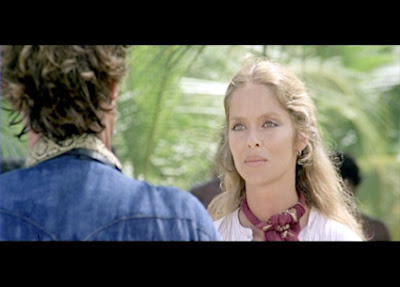 Photographer Daniel Nessel [Claudio Cassinelli] arrives at the Tropical Tourist Paradise soon to be opened to the first batch of visitors, and is happily greeted by owner and cynical businessman Joshua [Mel Ferrer]. Even though Daniel has a spiffy photo model Sheena [Geneve Hutton] with him for the promotional shots he’s been hired to shoot for Joshua, he is more prone to setting his focus on Joshua’s assistant Alice [Barbara Bach]. After a few obvious set ups and some needed exposition such as Joshua being a greedy moneybags who cuts corners on safety so that everything can be set when his first bunch of paying guests arrive. There’s also a subplot that involves Joshua exploiting the Maccuma tribe as cheap labour on his resort, and not giving a damn about laying their surrounding nature to waste as he expands on his paradise island, there’s going to be a major payback later on… a strange on, but still a payback. 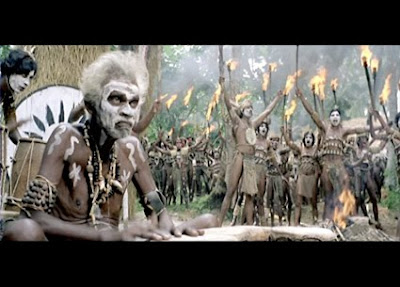 Alice takes Daniel and Sheena out for a tour of the area, and Daniel continuously shoots photographs of the working tribesmen, Sheena and on every possibly chance shoots of a candid shots of Alice. Later that night Sheena takes off on the lake with one of the natives that she previously danced seductively with during yet another photo shoot. Strange drums are heard over the waters (well really a primal and crap disco track by Cipriani) and Alice tells Daniel of the tribe who worship the giant crocodile god on the other side of the waters… Obviously it’s the set up for the initial attack as something attacks Sheena and her lover whilst they frantically paddle back to shore dragging them under the waters. 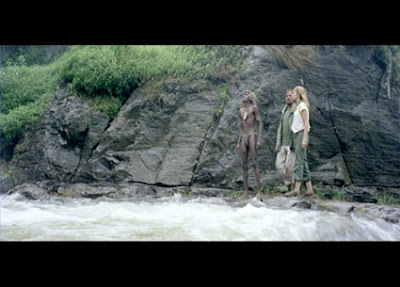 The tourists arrive and a new batch of secondary characters are introduced, sleazy youngsters only there for romance, elderly couples who mostly complain about the disco music and scantily clad youths and a little kid called Minou [Silvia Collatina – who later starred as Mae Freudenstein in Fulci’s Quella villa accnato al cimitero (The House by the Cemetery) 1981. Obviously none of these characters really mean anything to the plot except perhaps Minou who Daniel later rescues, but all in all it’s just another annoying red-haired freckled kid in an Italian genre piece. Daniel goes out to search for Sheena and obviously Alice goes with him, and at the same time the disco dancing youngsters hit the waters all reassured by Joshua that there’s absolutely no threat at all in the water… sound familiar? Alice and Daniel arrive at the island inhabited by the crocodile cults who are mourning a warrior – obviously Sheena’s suitor. The tribe tell them that they have woken the crocodile god Kroona, and he’s here for his booty, which leads them to the only “white man” to have seen the monster and survived – Father Jonathan [Richard Johnson], a hermit that lives in a cave deep in the jungles. As they make their way back to the resort they are attacked by Kroona, who chomps down on their native guide. Joshua is furious that they took off outside the restrained areas and refuses to have anything to do with the fact that there’s an enormous monster in the waters – after all he’s invested three million dollars into his paradise and will not cause a panic amongst his guests. 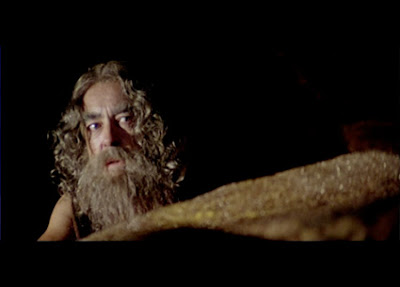 With all that set up the movie moves into its final act and it’s an act that finally sees some action taking place. Joshua takes all his guests out on the lake for the Tarzan’s Raft boat party, the tribe of croc worshippers decide to make a sacrifice to the god of the rivers snatch Alice, and Daniel is caught in-between with the dilemma of who to save. The boat now under attack by Kroona or Alice submerged in waters as an appetizer for Kroona. Panicked the tourists jump from the boat and swim to shore, as the monster easily guzzles them down and as if that wasn’t enough, the lucky bastards who make it to the shore are attacked by the crocodile cult – it’s a complete massacre. No action adventure is complete without its climax, and The Big Alligator River definitely has one, one that sees Daniel and Alice venture back down into the deep waters to take on the gigantic Kroona in a final battle. 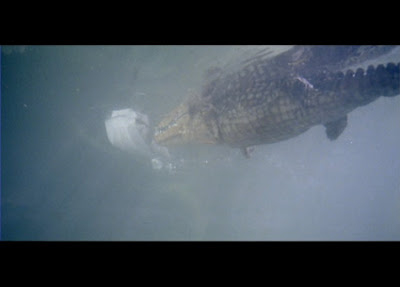 The Big Alligator River isn’t one of Sergio Martino’s better films. It has severe problems, one of them that it takes too long to set stuff up. There’s to many minor subplots that never really come into play, it moves way to slow to make it a fierce piece of genre cinema. Which is a shame, because the last quarter of the film is pretty intense and riveting, and if only the rest of the movie had been as fast and ferocious then the movie may have had a chance at making an impression.
Cassellini get’s his job done as the heroic character, Bach is pretty boring as usual, Ferrer overacts a few times and Richard Johnson delivers what may be his most freaked out part ever in an Italian movie. Italian bit part actors like Bobby Rhodes and Romano Puppo have decently large parts and a few action scenes, but still nothing that really makes any difference to the narrative. Which is odd as Puppo’s Peter character is the only real antagonist posed towards Cassinelli. 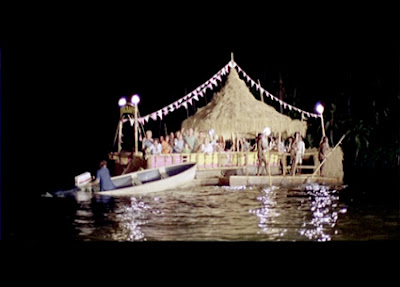 Needless to say the movie is heavily influenced by Spielberg’s’ Jaws where the cynical and greedy resort owner is more interested in milking his paradise guests for their cash that caring for their safety, and pays the price. Unfortunately where Jaws does have some great scenes and a brilliant narrative, The Big Alligator River doesn’t. Considering the stuff that screenwriters Ernesto Gastaldi, Cesare Frugoni, Mara Maryl, Martino and George Eastman (as Luigi Montefiore) had written previously and would write in the future, I’m surprised that they didn’t really go for the true core of the inspirational source, as it’s just as much about the character development of the lead characters as it’s about the big friggin’ shark, or like here an alligator. This is a key point that The Big Alligator River completely misses. I feel nothing for any of the characters or their troubles. There's never really any direct values or such at stake either, which doesn’t exactly help the movie along. 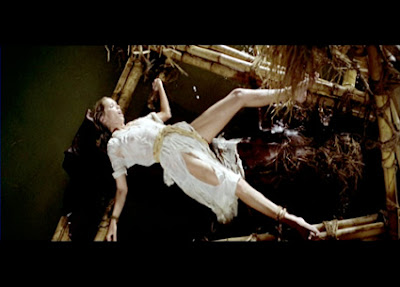 As said the movie moves terribly slow with way to many tedious slow-motion effects, which definitely don’t create suspense. Not even with the constant referents to there being crocodiles in the waters, as it’s not enough to make it exciting, not even that initial attack that clocks in somewhere just after twenty-five minutes of sapping movie plot. Then there’s the problem with the alligator or crocodile... it’s never really explained in a decent way, more as one single line of dialogue in Father Jonathan’s cave. Just like the reason for the tribesmen suddenly killing off the tourists and then finally just walking away as day breaks leaving several survivors to question why. In all honesty it feels like a major fuckup and sloppy writing, and it’s bad in every possible way. 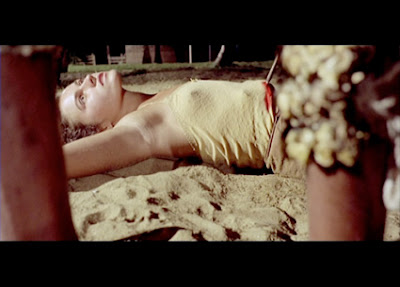 Not even the great editing of Eugenio Alabiso - who I have to hold responsible for the tedious slowmo scenes. Possibly in an attempt to bring some juice to the movie - or Stelvio Cipriani’s score, which is a really weak on to say the least, manage to salvage this one, which appart that final act is a really poor movie. Perhaps it’s best suited for a Saturday matinee or a late night slumber flick as it never really grabs hold of you in any way and pretty much just chugs along… slowly without a bite. 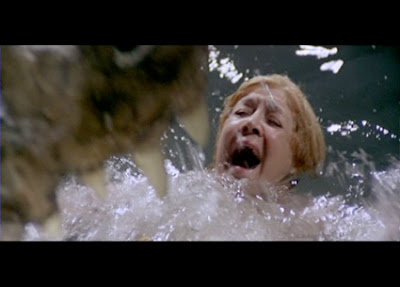 Finally… that the prosthetic alligator is kind of impressive in some screwed up way, and there’s no doubt that Martino could have gone all in with stock footage if he wanted, but instead there’s a big toy croc in the waters. Even if it does look fake in some shots, so does Bruce in Jaws, and this movie is made on a fraction of that budget.. So give credit where credit is due and acknowledge Carlo De Marchis’ monster alligator for the splendid piece of junk that it is. De Marchis was also part of Carlo Rambaldi’s special effect team on Ridley Scott’s Alien 1979, and special effects supervisor on Claudio Fragasso’s awful Leviatán (Monster Dog) 1984 starring he one and only Alice Cooper.
I don’t know what magic Sergio Martino had during that impressive run of stunning Gialli and Poliziotteschi a few years earlier, but The Big Alligator River sure lacks it. Sadly it’s quite a disappointment on many levels, which disturbs me, as I really wanted it to be a good classic Sergio Martino movie. 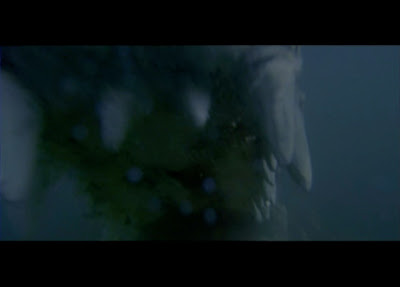 Image:
Widescreen 2.35:1 /16x9
Audio:
Dolby Digital Mono, Italian or English Dialogue with optional English subtitles.
Extras:
Well being a NoShame disc there’s a great bunch of extras, In the Croc’s nest features interviews with Sergio Martino (who also gives an impression of not quite liking the movie) and production designer Antenello Geleng. The Italian trailer, Poster Gallery, and a booklet on animal revenge movies and talent biographies.
Don't be fooled by the trailer, but check out Bobby Rhodes early on. And yeah this is about as good as it get's and it's all in the trailer...
- May 05, 2010

Seeing Mel Ferrer shot with a burning arrow just about made it worthwhile for me.
Also, seeing the toy crocodile bump into toy boat in the underwater shots was fun.
But overall it lacks enthusiasm.

Sure there are some neat little parts to the movie, but in the larger picture, Martino's "jungle" movies are pretty poor. Apart from Fishmen with is pretty good.