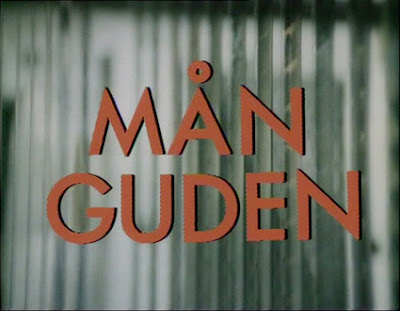 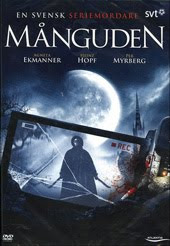 My good buddy Stefan who runs the only movie magazine worth reading here in Sweden sent me a DVD of Månguden with the suggestion that I watch and write something about this little piece of Swedish TV history. Having seen it back in the eighties when it aired, I was up for the challenge as this is one of those movies that fans and fellow bloggers hold dear and still talk about. I actually remember seeing the programme back when it aired but it wasn’t a movie that grabbed me and had me stay tuned to the show. Although I did see parts of it and these partial images did stay with me. Especially the mask, the close-ups of the gloved hands and the most iconic images – the campsite massacre! 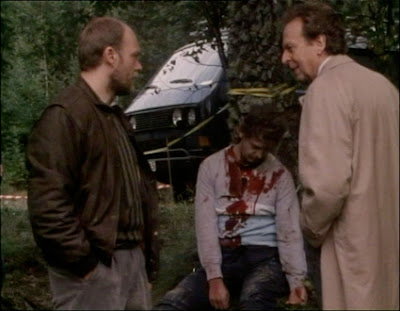 Jonas Cornell’s made for TV film Månguden (The Moongod) is one of those few Swedish movies surrounded by myths and legend of mystery and awe. For just over two decades the movie has been something of a holy grail amongst enthusiastic collectors and has been called everything from one of the bloodiest Swedish TV productions to the most nightmare inducing TV movie ever shown on the tube in this country. Supposedly it was so intense and haunting when it aired om the 23rd of September 1988 there where mass cancellations of camping holiday’s all over the country, the switchboards at SVT where blocked by agitated callers and after the re-run aired a week later SVT hid it way in the back of their vaults – not too unlike what happens to the rolls of film in the movie itself. 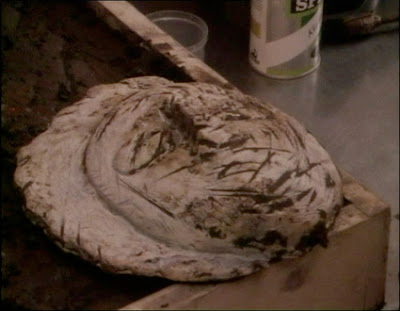 Månguden is one of those movies that time has been kind to as it is commonly remembered as being a lot freakier than it really is. But for the time it was made, it is pretty far out, and for a TV movie it does push into some new ground still making it quite eerie at moments. It’s not as bloody as its recalled being, and movies in the “Snutfilm” genre had gone much further years earlier, like Bo Widerberg’s magnificent Mannen på Taket (Man on the Roof) 1976 which has some extremely gory scenes for a Swedish movie of this time. Keeping in mind that it is a TV movie, pigeonholing a genre is pretty uncalled for, but its apparent that Månguden has more in common with American film noir than the genres one would like to compare it too. Sure there’s a couple of scenes in there that could be interpreted as Giallo traits, but it’s not a Giallo, even if we fans of that specific niche would love to stash it away there and add to the mysterious reputation that the movie has. 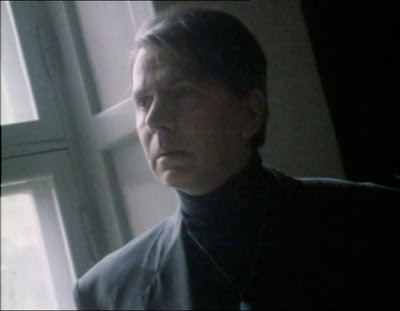 There’s a lot going on that doesn’t quite make sense at first but then reveals itself being part of a larger picture. Such as the sudden quick fix and apprehension of a suspect that is incarcerated and claimed being the killer. This is in some ways a direct critique towards the Swedish police force, and has some similarities to the way many of the larger cases in Sweden where solved. From almost out of nowhere an assailant was nabbed and placed behind bars, even if it seemed completely impossible that this was the murderer. Within the narrative of Månguden it’s a very important scene to solving the real killer’s identity, as the obvious forced closed case it a delicate red herring. The relationship between father and son – John and his dad – is interesting, and creates further depth in the John character, not to mention that the killer is targeting fathers as his trophy pieces... And I love the ending, with its ambiguity and partially unsolved mystery as it leaves a somewhat negative tone to the end of the film. It also introduces a possibility that there where two killers, and that there are further bond’s between then not yet discovered. 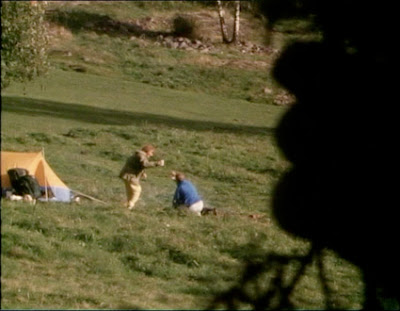 I can see why such attention is paid to detail when establishing the chain smoking, bourbon drinking, and jazz loving John, but it all falls flat for me when the Chet Baker album that he slips onto the turntable obviously isn’t Chet at all, but a sound-alike track by composer Jan Tolf. In all respect for the characters that they build through the early stages of the movie it pretty soon becomes apparent that the archetypes are more noir cliché’s than anything else. 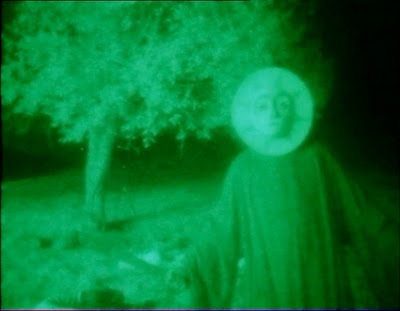 Even though it is a darned slow mover, it is still a pretty entertaining little piece. Story wise it is quite interesting, there’s a lot of small subplots going on that help make it an interesting piece. In line with the semi open ending, this is also how many of the subplots are used, hence creating an image of simply gazing into a few intensive weeks of John Vinge’s life as a detective. We know that certain events and actions will continue to live on outside the movies timeframe. In many aspects Månguden could have acted as a pilot for a serial to follow. Then there’s the strange relationship between Erland and Rebecca. Why does he go to see her in the middle of the night, and what’s up with those strange glances at each other? Well my theory on that also has to do with the great celluloid reveal at the end, as the father figure looks at two directions before succumbing to his fate. And to capture the “Killer” on film, there has to be someone else behind that camera viewfinder. 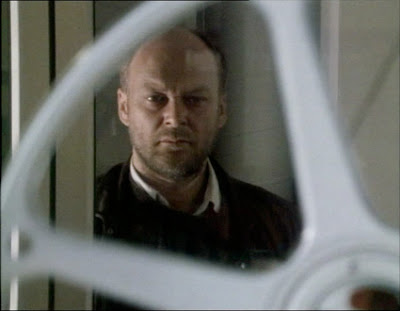 The cast is great and really a showcase of new, old and current talents. Tomas Laustiola with his broken Finnish/Swedish accent brings the melancholic and troubled John Vinge to a level of realism that may not transfer to foreign audiences, but feels very authentic to Scandinavian viewers. The seductive and mysterious Rebecca played by Cornell’s real life wife Agneta Ekmanner is a believable leading lady but doesn’t make any major impression when she puts on her cryptic face. Although Heinz Hopf [Arne Mattsson's Ann & Eve 1970, Bo A. VIbenius Thriller - A Cruel Picture 1974, Ingmar Bergman's Fanny & Alexander 1983] as the sinister Andreas Gregor does his thing just like I want him to. If you put Hopf into a production I’m going to like it because that guy was always fascinating. Per Myrberg’s psychologist Erland Salander is interesting because he’s at first a sceptic. Initially he doesn’t want anything to do with the case, but an interesting piece of exposition reveals that he was once a former colleague to John’s terminally ill father and that he at one time was the greatest profiler on the job. It’s what we drama gimps call “the refusal of the call”. But obviously he does take the case after being asked by John’s father. Which creates a great tension between the two of them. Forced together to solve these intriguing and violent murders. 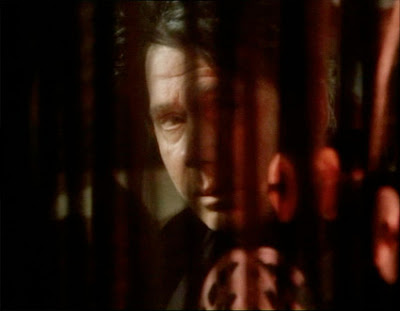 There’s a load of Swedish talent throughout the movie, both from the old guard and the new upstarts – now established actors and artists in their own right like Stig Ossian Ericson, John Harryson, Tomas Hanzon, Rickard Wolf to name a few - but perhaps most interesting is that the assistant director on Månguden was Mikael Håfström who these last few years has had a pretty good run with movies like Ondskan (Evil) 2003 and 1408 2007, but this still doesn’t help me forgiving him for the pretty cheesy Strandvaskaren (Drowning Ghost) 2003 that could only have been helped by casting Fred Andersson in a part. 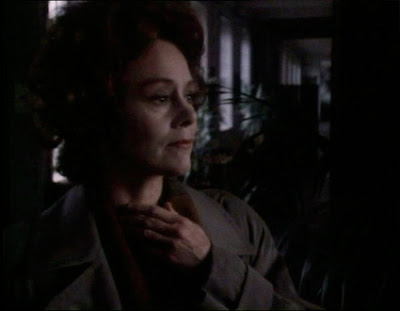 Bringing a cultural aspect to the whole thing and searching for a reason why it evoked such strong emotions I would probably say that the Appojaure killings of 1984 had something to do with it. During the summer of ’84 two Dutch tourists where found stabbed to death in their sleeping bags, and the assailant had apparently attacked them through the tent canvas. There where no apparent leads or motive for the killings and still today nobody has been convicted of the crimes. Although self proclaimed serial killer, Thomas Quick did admit to the crime and was sentenced to lifetime, few actually believed that he was responsible. He has in he last few years proven to have lied about many of his supposed crimes blasting holes in many once again unsolved crimes. 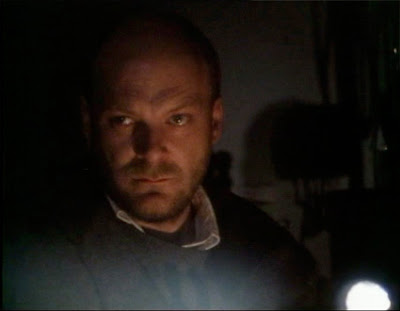 Obviously the murders where big news and pretty shocking at the time, and when Månguden aired there was still no real solution to the Appojaure murders in sight. I’m sure that this played some part in the reception that the show had, and then the fact that SVT kept it from being available or aired since that last screening in 88, and quite possibly why it has been recalled in our collective cultural memories as something much more sensational than it is. 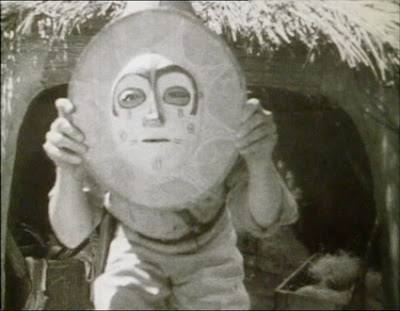 Being a fan of Italian genre films and watching this one there are several things that strike me, such as the apparent Gialli traits (though I still wont say that it is one) but I can also spot possible influences by Robin Hardy’s The Wicker Man 1973, Richard Marquand’s The Legacy 1978, and the Friday the 13th movies. And then there are the hidden reels of film that are stashed away in the concealed secret vault in the basement of the Ethnographic museum. There are obvious associations to the footage of Ruggero Deodato’s Cannibal Holocaust 1980 as that film is projected, hence explaining the motivation for the killings, and just like many of Dario Argento’s films, the killer’s raison d’être stems from a childhood trauma. There are obviously no concrete claims to this being the case, but it helps grasp the mythical status that fans of genre films have created around the movie when possibly connections to movies within that sphere are noted. 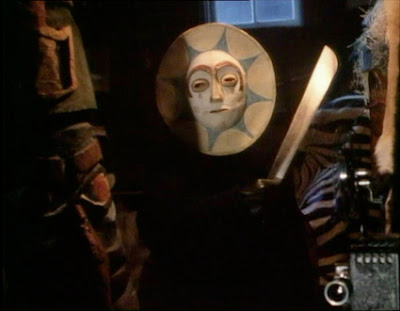 All in all, Månguden is a good little movie well worth the watch both from an urban legend view and a narrative view. It’s understandable that the movie has been shrouded in such mysticism and fond memories, even though it clearly lacks many of the recalled traits that we so fondly project onto it. But it is an entertaining movie, a document of the time it was made, and also a rarity amongst Swedish cop movies as it sticks it neck out in a varied amount of ways which makes it live up to the great reputation that is still holds today. 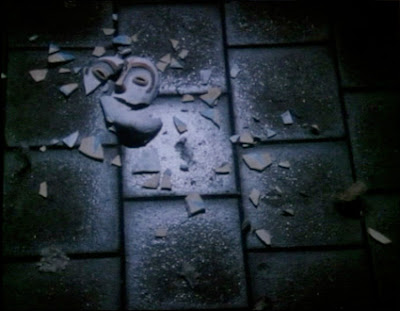 Good review... and I'm not in Strandvaskaren :)

thanx. And no you aren't in Strandvaskaren, which is a shame as that would have given some reason to still talk about it.

This film sounds cool, who knows - one day I might get to see it.
I really enjoy learning about interesting Swedish cinema from your blog and Ninja Dixon.

Jonas Cornell is a star in my book. Famous for hus durectorial debut Puss&Kram (hugs and kisses) which put wife Agneta Ekmanner in the Guiness book of records for first bush-shot in a feature film ;-) It was banned in the uk because of that

That is worth being called a star for! :)

Cool review, Magnus! I've been wanting to order it for a while and I'm gonna do so now.

Oh, and if Alex B is interested in good Scandinavian horror movies he really ought to get "De Dødes Tjern" (1958) which isn't Swedish but Norwegian. It's one of the very best! The new Norwegian DVD has English subtitles.