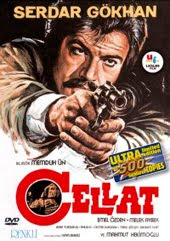 I’m really enjoying going through the releases of lost Turkish cinema classics brought to us by Onar Films. There’s something tremendously appealing with those fascinating pieces of movie history that finally have seen the day of light and in the best shape they have been since initially being made back in the day.
Cheap, gritty, sleazy and violent but ever so entertaining pieces of wonderful fantastic cinema that deserve to be seen once again. 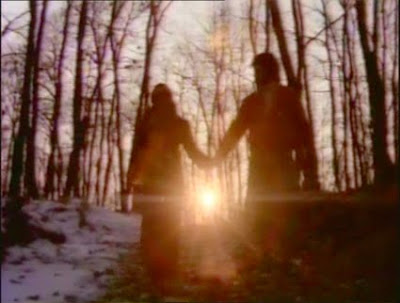 In the wake of Michael Winner’s controversial and successful common man out for revenge flick Death Wish 1974 starring the late great Charles Bronson, there was an endless flow of vigilante / revenge movies hitting the market. Like many other places domestic filmmakers where getting in on the action and producing some really great stuff. Needless to say even the producers and companies of Turkey’s Yesilçam wanted their share and one of those movies to finally resurface after years of being missing in the dark vaults is Memduh Ün’s Cellat. 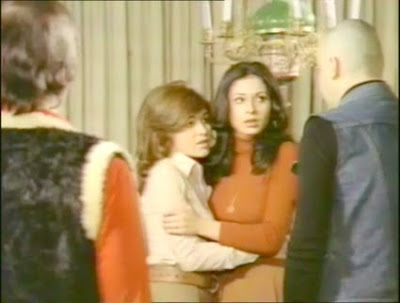 But instead of simply copy, pasting the plot and climax from Winner’s movie - even if it does play almost identically at times - screenwriter Bülent Oran actually wrote a script that predates Winner’s sequel, Death Wish 2 1982 and brings more to that character and the law enforcement trying to bring the vigilante to justice. It’s a hard hitting, fast moving flick that after a somewhat deceptive opening get’s right in there and proves that there where certainly some splendid movies made in Turkey during the seventies. 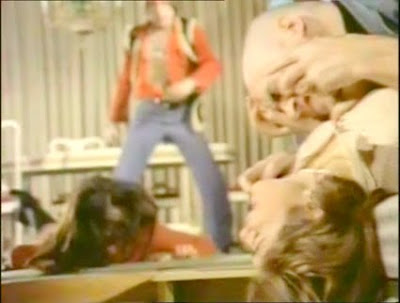 Successful architect Orhan [Serdar Gökhan] returns from a wonderful holiday in the woods with his wife Filiz [Ernel Özden], his beloved little sister Sevgi [Melek Ayberk], and brother in law Jahit [Mahmut Hekimoglu]. After returning to work in the city, he is appalled to read in the papers of the violent crimes that have been taking place in Istanbul whilst he’s been away.
At the same time Orhan's wife Feliz and little sister Sevgi return home from a shopping spree only to be confronted by three vile, and almost comical thugs Jemal [Oktar Durukan], Hasan [Ibrahim Kurt] and leader Sabri [Tarik Simsek] that have come down from the hills to vent their frustrations on the wealthy inhabitants of the city. Possibly portrayed as comic louts at first to differ them drastically from the mature and very down to earth characters seen in the opening sequence, and also to harden the acts they are about to commit. The thugs break into Orhan’s home only to humiliate, beat and rape the two defenceless women. Meeting his brother in law at hospital, Orhan is devastated to learn that his wife has passed away and his sister is in a coma. 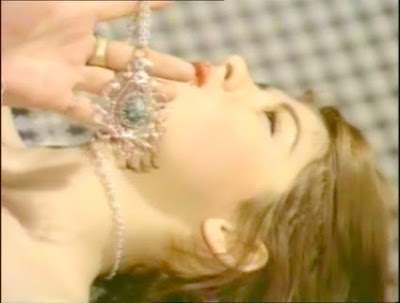 The cops lead by Commissioner Nejati [Reha Yurdakul – who you can see in a whole bunch of other Onar Film releases like Yilmaz Atadeniz’s Casus Kiran (Spy Smasher) 1968 and Kunt Tulgar’s Süpermen Dönüyor (The Return of Superman) 1979 and Iilhan Engin’s Kadin düsmani (The Woman Despiser) 1967] – anyhow, they are fairly uninterested in Orhan’s frustration for the lack of leads to the guilty gang, tell him to keep calm and await for his sister to come around so that she can give them the valuable information that they need.
Fed up with police neglect, growing crime statistics and a desire for vengeance, Orhan fills a sock with quarters – we even get to see him make the with drawl from the bank – and takes his frustration to the streets. This frustration builds and builds as he starts to make his way through the underbelly of Istanbul leaving the former gentle and loving Orhan further and further behind and gradually descending into a one man death machine out for revenge. 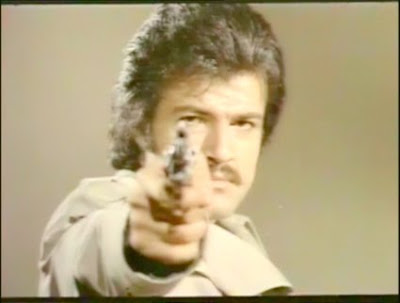 This change in character is fascinating, and it’s built delicately, there’s no sudden decision to become something else, it get the space it needs and Orhan is always a believable character. Breaking it down in an easy way the movie has a pretty lot of small character traits seeping through the movie that in some way’s make Serdar Gökhan’s Mr. Orhan a much more likeable and empathetic character than Bronson’s Paul Kersay. Where there’s not much time spent establishing a sympathetic persona for Bronson in Death Wish, Oran and Ün make sure that Orhan is a really, really good guy before the dark transformation takes place. He’s out with his wife and sister on romantic holidays; he tends to an injured dog, he wishes for love and happiness for all his family and friends. Even the scenes at Orhan’s architect office show how respected he is by friends and colleagues. He’s a good guy, it’s easy to like him.
This line of decency continues, and is brilliantly shown when he returns from his first lethal confrontation with a backstreet thug. Filled with nauseating remorse he vomits violently when coming to terms with the fact that he just killed a fellow human being. Now these establishing traits are of outmost importance, as the later will be polarized when Orhan finally get’s his revenge. The kind, gentle character has become a dark, vengeful death machine that shows no mercy at all. 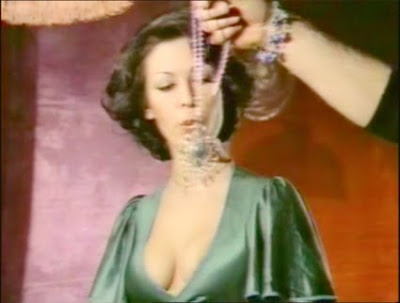 There’s an effective use of a clever plot device in the shape of Sevgi’s necklace. It’s a great little detail that at first seems random as the rapists rip it from her neck, later when it returns in the Club Love Story when Sabri buys his way with a prostitute [Anuşka] for the jewellery we expect Orhan, who just had a drink at the place, to get that rush of insight and bring the bad guys to justice. But instead it’s cunningly held back and only later does it return as Orhan has been broken down to the lowest point of his tour of vengeance. Shot in the leg, bleeding profoundly and suffering terribly from his injuries, he breaks into an apartment and finds the prostitute that Sabri paid with Sevgi’s necklace. He finally has his lead and the movie can shift into top gear and final act with full speed. 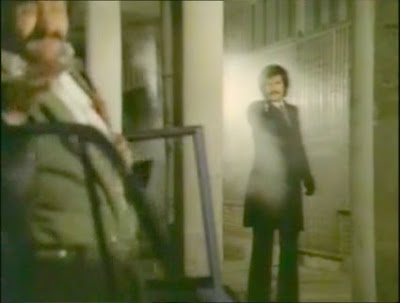 And even though the opening titles may seem like something a kid threw together, and the starting segment somewhat cheesily sets up the character of Orhan and family, it does get dark and hard pretty fast. His character develops, or rather degenerates into the murder machine, and when his personal justice is served it is definitely in the most evil, sadistically and righteous manner. You will be cheering Orhan on as the thugs finally get their comeuppance. Even the cops stand by and almost give Orhan a nod of appreciation as he’s completed his task, hands over his shooter and walks away from the carnage.
Cellat is a brilliant piece of Yesilçam cinema, and really shows Turkish Exploitation film at its best. It’s gritty, it’s rough, and it goes all in taking no prisoners what so ever. Revenge is served up without any mercy at all. Serdar Gökhan is a great leading man, who not only has that great character arc, but also show’s that a hero character can take a few deep wounds and limp his way through the rest of his mission. I get quite annoyed when hero characters take one hell of a beating, stabbing or even like here get shot, and simply walk around as if nothing happened. Gökhan suffers from his wounds and brings them with him in each following scene, which at the same time adds immensely to his character. He will make them pay at all costs, and his reward for the great performance he gives is obviously the many parts as the leading man out for revenge that he played in the movies to follow Cellat. 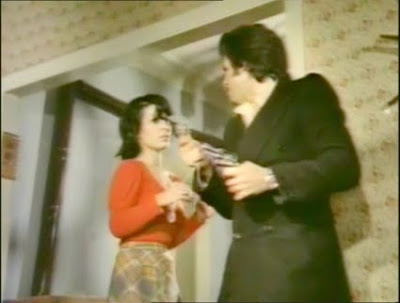 Bülent Oran’s script is well written, as there is a depth to the lead character that commonly is pretty friggin’ shallow in this kind of niche. He also brings a fresh new twist to the end of the movie that differs from the original source. Ironically the writers of the movie that inspired this one used the same kind of ending in their sequel to Death Wish twelve years later. Even though the movie is within the exploitation sphere, there are some wonderful shots by cinematographer Kaya Ererez who uses some great angles and locations in his compositions. I absolutely love the many scenes featuring Orhan surrounded by thugs often located in stairwells, or tight spaces. It makes for some inventive cinematography, and splendid shootouts with a lot of movement. Mehmut Ün had been directing movies since the mid fifties, and moved freely in a wide range of genres and receiving several awards and nominations for his films. Amongst the few of his titles available domestically the secret agent flick Altin çocuk (Golden Boy) 1966 – also scripted by Bülent Oran, which you can easily obtain from Onar Films, and if you want to read all about that movie here’s a patch through to the splendid Ninja Dixon. Ün also produced near one hundred movies, acted in three dozen films, wrote scripts and directed somewhere near eighty films between his debut Yetim yavrular (The Orphans) in 1955, and his last film to date Sinema bir mucizedir (Cinema is a Miracle) 2005, starring Kadir Inanir who starred as Yilmaz in Mehmet Aslan’s grim Gialloesque Aska susayanlar seks ve cinayet (Thirsty for Love, Sex and Murder) 1972. 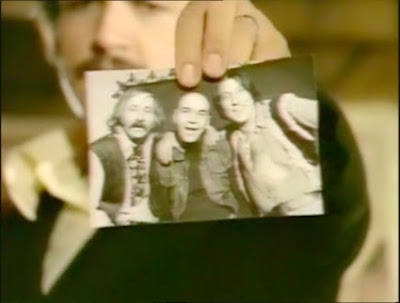 The soundtrack to Cellat is awesome. It’s certainly eclectic, much of it very traditional and the kind that you would expect in a Turkish movie and some is surprisingly suave with a hint of jazz prog that could have come right out of an Italian Poliziotteschi flick.
Fans of great genre pieces really need to get themselves over to Onar Films right now, and pick up some of the movies released there. The site has just been revamped and there are some great offers available right now. And while you are at it, pick up a copy of Mahmut Ün’s Cellat, as the limited release of 500 pieces is starting to run out. 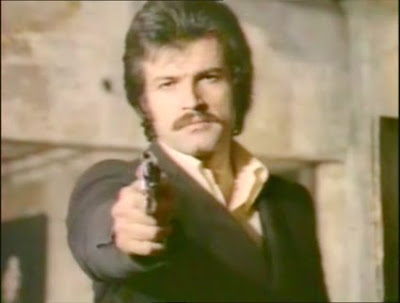 Image:
Full screen 4:3
Audio:
Dolby Digital Stereo 2.0. Turkish Dialogue, optional English or Greek subtitles.
Extras:
As usual the Onar Film releases are packed with extras, here there’s a great half hour feature on Turkish revenge films, Selected filmographies, the original theatrical trailer for Cellat, and other titles available from Onar Films. Last but not least that great fold out poster art for the poster of Cellat.
- May 27, 2010