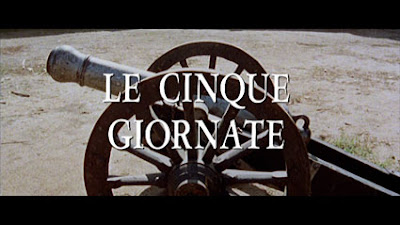 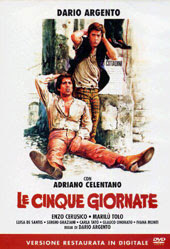 Five Days of Milan
Original Title: Le cinque giornate
Directed by: Dario Argento
Italy, 1973
Drama/Satire, 122min
Perhaps one of, if not the, least accessible of Dario Argento titles, Le cinque giornate (Five Days of Milan), is something of an antithesis of everything one has come to associate his name with. No, you won’t find a single razor wielding leather-gloved maniac here. Nor will you find the gothic horror of his Three Mothers series… Instead you will find a historic comedy about two accidental compadres, Cainazzo [Adriano Celentano – An Italian singer/actor who also starred in three of Lucio Fulci’s early musical dramas) and Romolo Marcelli [Enzo Ceruscio] who find themselves caught up in the midst of the Italian revolution of 1848. 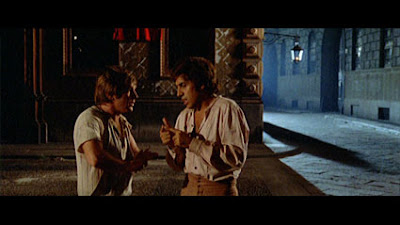 After completing the classic Animal trilogy, Argento wanted to explore other areas as he felt that the Giallo as a genre had peaked. A daring, but kind of odd move as the three previous Gialli had been reasonable successes. So the choice of comedic period piece doesn’t really make sense. Although taking into mind that Argento had previously – and during the time he directed his first three Gialli - written period pieces for other directors, the choice may not be so far fetched. These movies where primarily Second World War, and Spaghetti Westerns – the most famous being his minor part on Sergio Leone’s Once Upon A Time In The West 1968 – so setting Five Days of Milan in a past time can be understood. But the choice of the comedic elements… well, to be honest, I’m convinced that Argento tried his best to script a satirical piece, and that along the way – perhaps through producer pressure - added certain elements to lighten up the script with some half hearted eroticism, some tame slapstick effects and synthesizer renditions of classical music pieces. Something Kubrick would do a few years later too, but then it was Kubrick and considered innovative and genius. Never the less, Five Days of Milan may be a shambles of a film, but it definitely is a unique one off in the career of Dario Argento. 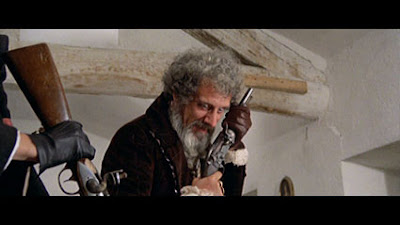 I really beg you to stop relying on the shoddy reviews that compare Five Days to stuff like the Morricone movies and even The Wild Bunch, because it has fuck all to do with those movies and is nowhere near trying to plagiarize or copy them. In my eye’s they either didn’t see the movie at all, or they simply goggled it up and copied notes from each other. What Argento, with co-writers Luigi Cozzi, and Enzo Ungari did was script a satirical piece that polarizes the characters and events all the way through – and makes a comment on the politics of Italy. Keep in mind that the same political corruption and dissatisfaction that saturated the Poliziotteschi genre was already there and Argento has always had a political undertone to a lot of his early movies. Five Days of Milan, is a satire, nothing else.

Also, there are scenes of children dying, violent killings, executions, gang rape and the shocking death of a lead character - none of them themes for a comedy. 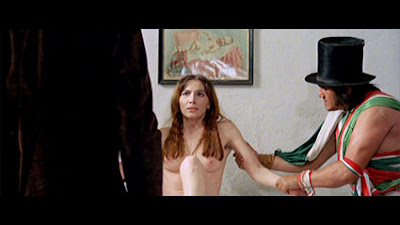 Early on the two “accidental hero’s” help a woman in labour, later they can only stand a look on as the armies muskets shoot down a child and mother – in a scene which obviously is Argento’s "Odessa staircase" moment. The revolutionaries are rewarded with consensus sex, where they later rape and abuse their “Italian women”. A string of accidental chance meetings connect the characters and the narrative – almost like in a Buñuel movie – Caniazzo is freed from his prison, by chance/accident. He becomes drawn into the revolution, by chance/accident. He teams up with Romulo, by chance/accident. They become part of Zampino’s [Glauco Onorato] small army, by chance/accident. Romulo seals his fate by chance/accident. I’m almost provoked by the lack of action taken by the lead characters, they are terribly passive and things just happen by chance. It’s not really satisfying. Life turns to death; freedom becomes captivation, and the cynical last minute twist shows that nothing really changes. A stunning metaphor when looking at Italy of today proves to be terrifyingly accurate.
None of the two lead characters are destined to be heroic characters; instead they are accidental protagonists – and weak protagonists at that. In the same random chance of events that make them our protagonists, the same random chance seals the fate of the two characters. It brings a sad and tragic mood to the movie, which again goes to show that the intention can’t have been to make a comedy. 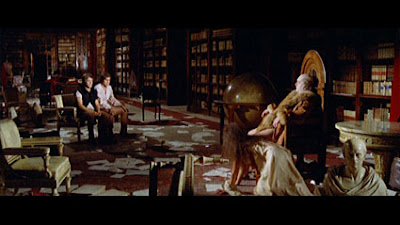 If I where to pick out a few moments to share I’d first and foremost say that the fast motion chases, and slow motion fist fights kind of offend me as they go against everything that Dario Argento stands for in my book.
Argento regular Fulvio Mingozzi makes a brief appearance and there’s supposed to be a rare Argento cameo in the movie too, but two viewings on and I still haven’t seen it. The bandaged character referred to as Argento on the web is not Dario Argento.Cinematography is stunning - Luigi Kuveiller creates some moments that certainly mimic his best Gialli work and one can see why Argento wanted him to shoot the masterpiece to follow, Profondo Rosso. 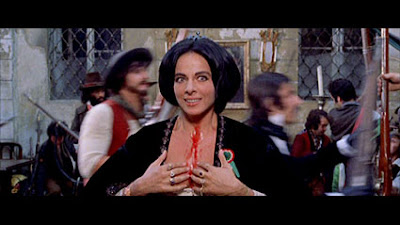 I really laughed at the scenes with The Countess [Marilù Tolo] who becomes aroused by the blood which squirts over her breasts as one poor revolutionary is shot dead. Se seduces the soldiers, she's raised above the victorious crowd, who shamelessly grope her buttocks and she steers them towards her apartment where she invites them all to celebrate the victory by shagging her. This entire sequence oozes Fellini/Pasolini, and is amongst one of the few highlights of the movie. 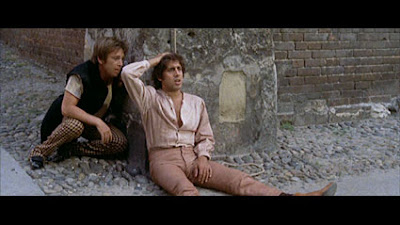 During the same year, 1973, Marilù Tolo starred in the Roberto Pariante episode of the TV Series La porta sul buio (Door into Darkness), Testimone Oculare. Supposedly Argento stepped in and took over the episode and directed parts of it uncredited. Perhaps this dabbling in genre themes and the failure of The Five Days where what made him set his sights on the Giallo genre once again. The next movie to come from the pen and direction of Dario Argento, was the legendary Profondo Rosso (Deep Red) 1975, and despite being a somewhat mid/late entry into the genre, this is the one that most connoisseurs consider to be one of the very best Gialli ever put on film.
- February 14, 2012