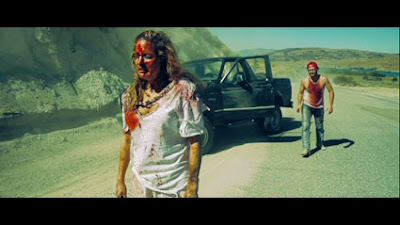 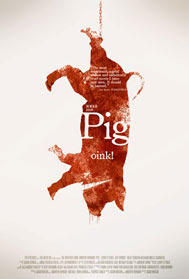 
You know when a serial killer, or a mass murderer, gets caught, and despite the fact that they raped co-ed’s, ate babies and smashed in the heads of their victims, there is always a neighbour or two who comes forth with the age old “Oh, But he was such a nice and quite person, I’d have never have guessed it…” statement. Well in a pretty harsh way, Adam Mason’s Pig comes off as a video journal of the dark events those blissfully unaware neighbours, never could have imagined their nice friendly neighbor had taken part of.

A woman runs screaming towards the camera… behind her, a truck pulls up and grinds to a screeching halt. Out stumbles a bloke wearing a trucker cap and bloodied wife beater. He stomps up to the woman, punches her so hard that she falls to the ground… he moans that he “doesn’t want to do this” before he returns to beating her to a pulp. He tosses her onto the back of his truck and takes off back to his trailer where a second woman lies on the ground, chained to a pole. He parks the car, flips down the hatch and brutally strangles the woman in the back of the jeep to death... This is the start of a seventy-minute one take that will take you on one sincerely dark journey. 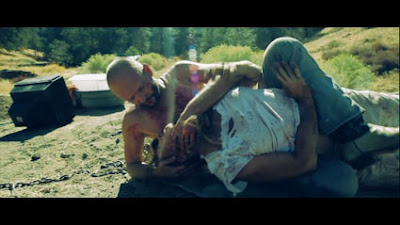 With a tone and atmosphere close to the old grindhouse flicks, and roughies of the early seventies – seriously, if Pig was shot in the seventies when the likes of Shaun Costello, Doris Wishman, and why not, Bo A. Vibenius, where mucking about with their provocative rough and ground-breaking movies there’s a no doubt about it that there would have been graphic sex inserted into PIG, at least in the European version. Anyway, with that kind of tone set, contemporary films that dabble in themes of prolonged sadism, and the zing of white trash redneck – as that’s the first impression the introduction of lead character Andrew Howard gives - this is really the horror version of Guerrilla Filmmaking – Rough, gritty and harsh, Pig get’s right in there, picks at scabs and rams a provocative finger deep into the yet unhealed and septic gash.

Story wise – which I’ll return to in a moment – I at first found Pig somewhat lacking. But there’s a crack of the whip ending that turns everything head over heels and does some great things for the movie. But technically – and performance wise – this is a great movie, impressive and intrusive. Shot in merely four days and seemingly one seventy minute long take, shot – although I do have a few idea’s of where the edits, if there actually where any, may have been placed – the movie passes no judgment or value in the actions portrayed, the camera merely observes rape, murder, torture, abuse, screwdriver sodomy and dinner preparations, where onions and blood of a pregnant woman are vital ingredients to the sauce being is cooked. 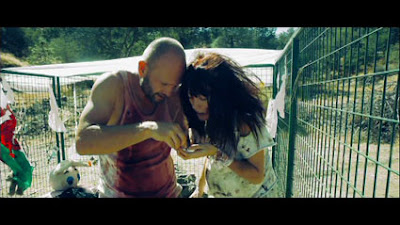 Pig is nothing less than a superbly choreographed dance of death, as I can almost sense the minimal crew and effects people stepping in to rig stuff each time the camera leaves them outside it’s gaze. I’m not saying that this is how they actually went about making Pig, but that’s the sensation I get. When the camera moves back – changing focus from a specific character, then you almost know that something bad is going to happen when the camera returns to that person.
The movie, which again, is said to lack any plot or story – which I can’t really agree with – because there are moments that seep through where Andrew shares some moments of tenderness with his just as psychotic partner Molly Black – like removing the contact lens that frightens her, or the patting of her stomach where his yet unborn child lies, and boasting about this same baby later on. There are moments of tenderness there if you look for it. The natural narrative becomes trying to puzzle the constellation together – who goes where, how long have they been there, what who why… And when Black takes the position she does, a backstory comes into play. Who is she? Is she an earlier victim, or an old girlfriend? She’s still caged, but obviously holds some special place in Andrew’s dangerous life. This is just one of the many questions that will stick with you after the last act twist. 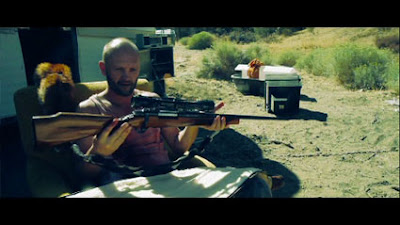 The weird rant on radio, which reminds of generic horror’s use of the Southern Religious nut broadcasting to the masses a sermon, filled with fear and hatred for sin and the Devil. Although here it’s a beguiling broadcast of Misogynist talk show where even the female callers are reduced to objects of desire by the chauvinistic show host. It brings a fascinating unease to the scenes and in the same way that the religious chants in generic films warn of evil to come, the radio show in Pig says a lot about the characters who listen to this specific show, it sublimely sends the signal that women hold no value here at all, and is the agenda for the day.
Although, I do have somewhat of a problem with Pig, as there’s really no character development… which isn’t entirely true, but I’ll get back to that soon. Unfortunately I start to loose interest after about an hour of the onscreen antics, but when it jumps into the final act, I’m bitch slapped into paying attention again, and the wait has been worth the while. Yes, Pig has a final last act twist that actually makes it a fascinating movie. I love when movies go full 180° and kick you in the bollocks, giving you a rush of insight that puts everything into a new perspective, which is exactly what Pig does. Now, don’t go there expecting a violent mosh pit ending, because that’s not what you get, you get something so much more disturbing and provocative. See a movie that at first seemed to be of one certain kind, twisted over and became something completely different. 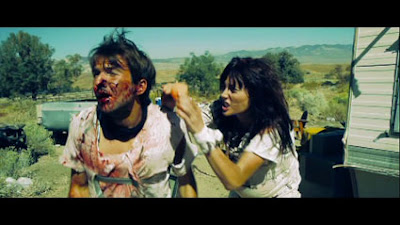 Keep your eyes open for a Welsh Dragon flag when Andrew releases Molly Black from her cage. Howard is from Wales, hence the flag being placed in the cage. Little details like that will have me returning to the movie, for despite being very Spartan in it’s design, there’s details looming in the background waiting to be spotted.
Just like Apocalypse Now, Hostel, Cloverfield and Inception, there are no opening titles to the movie. Just two quick logos then, blam, into the action. Even the end credits continue to mock the viewer, as they actually are the end credits from The Devil’s Chair 2007 played in reverse… 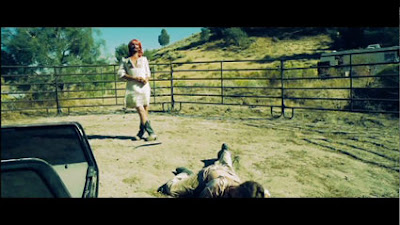 In interviews director Mason has said that the movie was the result of a shared frustration with long time collaborator Andrew Howard concerning the movie business where people literally get away with any god damned thing. Together the two stopped talking, decided that no corporate bullshit would stop them, and set plans in motion. The result is an impressive piece that definitely should be seen as a cynical metaphor for the movie industry and what goes on there. I lift my hat to Mason and Howard, as Pig took me down a road I’m starting to loose interest in, only to have an unexpected surprise lurking for me at the end of the movie.

Innovation is a great thing, rush of insight is a fucker of minds, and this film definitely need’s to find it audience right now. Instead of watching mainstream bullshit, and franchise diarrhoea, demand Pig - perhaps one of the most interesting movies you still haven’t seen. 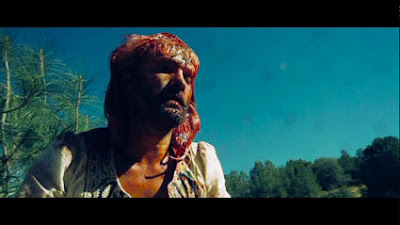 Fine review. Wants me to see it!

You should see it. I'd love to hear what you think of it.
J.

The talk show host you hear is Tom Leykis.