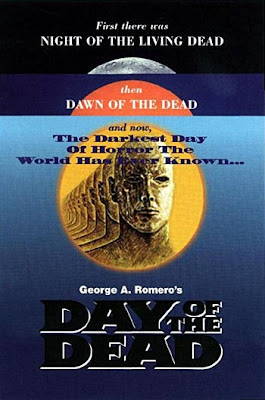 Just as much as I hate that BluRay brings out the flaws in all my favorite movies, I love that BluRay brings out the details in all my favorite movies...
We where sat in the new cinema at the new office watching the new BluRay of George A. Romero's gritty climax to the original Dead trilogy, Day of the Dead 1985, when secrets that have been kept safe from the eye in previous versions - yeah think umpteenth version dupe, as that's how I first was introduced to this movie decades ago - where suddenly unleashed upon the bunch of us who'd gathered for our weekly dose of big screen carnage.
Day of the Dead is riddled with referents to previous installments in the Romero franchise and also several nod to other classic movies and horror related themes. There's the grand opening which sees Sara [Lori Cardille] have something of a recurrent nightmare. It not only set's the theme of pending doom, but it's also an obvious Roman Polanski's Repulsion 1965 homage. There's the nickname of Dr. Logan [Richard Liberty], Frankenstein - a contemporary spin on the creation of the modern Prometheus, as he tries to tap into the zombies primal "human behavior", and there's referrals to names from previous installments, and the obvious Stephen King's Salem's Lot nod. 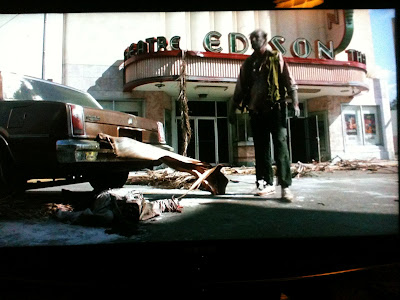 But the minimal scene that caught my attention was the scene at the beginning of the movie - let's call it the ordinary world if you like - after the Repulsion prologue, where Lori and Miguel [Antoné DiLeo] are scouting the town for survivors, but merely awaken the horde...
After the crocodile crawls out of the bank, but before the iconic image of Dr. Tounge and the titles are up on screen, there's two shots of a zombie coming out of the Edison Theatre, and in the background of this wonderful high-defenition print from Arrow, you can make out two great posters on the outside of the theatre...
The images are posters for Lucio Fulci's Conquest 1983 and Enzo G. Castellari's I guerrieri del Bronx (1990: The Bronx Warriors) 1982. (There's a third poster hidden behind the door that seems to be shark related, but I'll leave the imagining up to you) 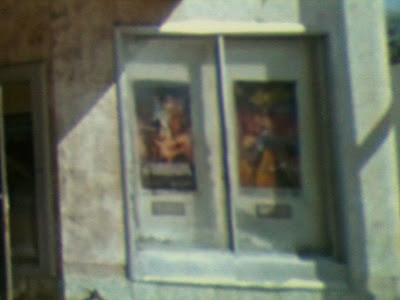 Now this may just seem to be random images which one may come to expect outside an old theatre... but these movies where movies that had a couple of years on their neck at the time Day of the Dead was shot. As far as I'm concerned I'm quite sure that this is a deliberate decision made by Romero - who's movies frequently hold nods to other films, filmmakers and writers that he appreciates - and his longtime collaborator production designer Cletus Anderson, art director Bruce Allan Miller and set designer Jan Pascale.
A great little secret, or perhaps homage, that's been hidden in generation loss and inferior quality since 1985, now finally sees the light of day!
- February 10, 2012

Jesus, well spotted Jas, I don't think I would have seen that even in hi-def. And it's cool cuz I have a great fondness for CONQUEST. That is one fucked up movie. I love showing it to friends after a few beers.