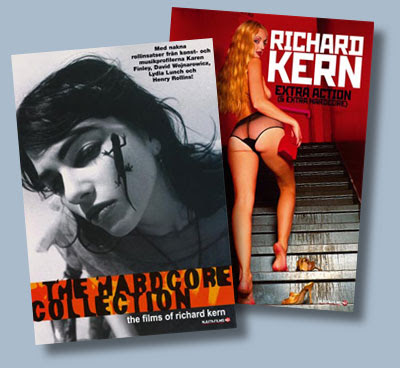 Ask any twenty something hipster to name five awesome photographers and they will most likely name Richard Kern as one of them – Because they all read freebie mag Vice and will also name Terry Richardson too, as they both are frequently featured in the pages of that mag

Ask any forty something cineaste with a passion for underground and narrow niches to name five awesome photographers and they will most likely name Richard Kern as one of them – Because they all read freebie mag Vice and will also name Terry Richardson too, as they both are frequently featured in the pages of that mag… but the forty something person will also start off on a rant about those experimental underground movies that Kern made back in the eighties. Confrontational imagery encased in micro narratives with harsh bursts of audio-assaults composed by the likes of Sonic Youth, and Foetus. This was the Cinema of Transgression, a razors edge, where art meet’s low budget filmmaking, performance meet’s underground, sex meets death. I personally think that this time period is one of the finest ever when it comes to groundbreaking art. 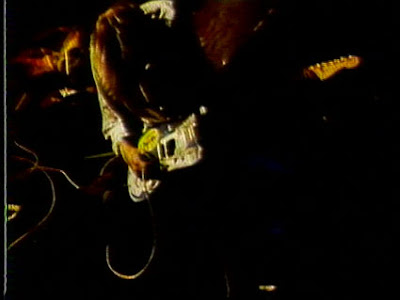 Watching Richard Kern’s works again for the first time in a very long time, I still have to say that I prefer the grainy super 8 eighties/nineties movies to the later stuff. Their gritty rawness and enthusiastic aura generate such a potent stature. Popping in the new release transfers me right back to early- mid nineties and damn I did enjoy the Cinema of Transgression back then, and in some fucked up way I still get some kicks from those movies today.
Starting with Xeroxed underground zine’s such as “The Heroin Addict”, “The Vailum Addict” and “Dumbfucker”, filled with eclectic writings and images that in a Dadaistic way reflected the feelings the Roanoke Rapids, North Carolina born, Kern had for the saturation of culture, films, music and foremost for the ways of life in everyday New York it’s no real surprise that the anti-establishment soon moved on to handmade, zine movie making. Kern stepped into filmmaking with his first short, Goodbye 42’nd Street 1983 [also featured as an bonus on the Extra Action & Extra Hardcore DVD] which see’s a subjective camera wandering the now long lost 42’nd street and imagining what goes on behind the closed doors and cinema billboards… in more than one way the obvious influence upon the early films of Richard Kern pop up both on screen and in the thematic imaginary encounters he intercuts the walk down 42’n street with – seedy and violent exploitation cinema! 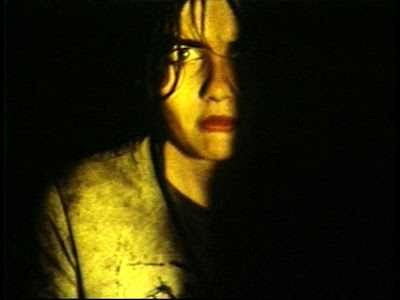 Mid eighties, alongside several other New York alternative scene characters like Beth B, Lydia Lunch, Tommy Turner, David Wojanarowic, and perhaps most importantly Nick Zedd they became a scene of their own, the no holds barred, homemade cinema movement christened by Zedd as, The Cinema of Transgression.
With a manifest written by Zedd which basically rejects the use of rules, structure and cinematic snobbery the doors where opened and New York underground cinema saw some of the most important and vital works being made in the short span of just five-ten years. Anything goes and anything does go in these movies, which definitely are not for the weak of heart. Theory meet’s improvisation, Performance meets structure, chaos meet’s reality. The movement is provocative, innovative and fascinating. The Cinema of Transgression is a movement to know, understand, love and respect. 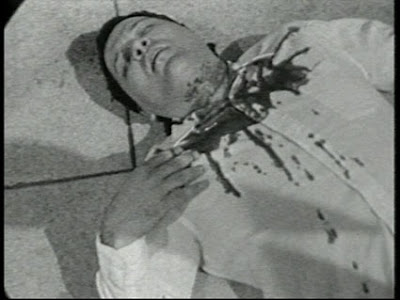 Ironically, all the things they where taking a stance against, all figure in their movies, some in fantastic ways. The great victory is that these movies in their short form (with some exceptions as some are long massive pieces) become something of a concentrate of storytelling, juxtapositions and narrative. All that stuff I ramble on about in my texts here, well, it’s all in the movies of the Cinema of Transgression too, it’s not just mindless art fuck, and I still to this day say that the Cinema of Transgression did more for movies than Lars Von Trier’s Dogme ever did. 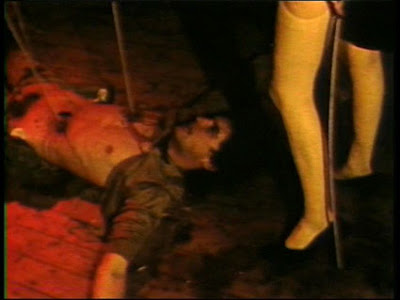 As for Kern, well, you could split his work into two important time periods between 83-87 and then 90- till today. In between 87-90 he left New York as he relocated to San Francisco to break up with his addiction to drugs. Amazingly enough he hooked up with New York shock-rocker (and times performance artist) Kevin Michael Allen, more known to you and me as G.G. Allin, later figure of the post Transgression director Todd Phillips! – Yes, years before he became the golden calf of Hollywood comedies – Road Trip, Old School, Starsky & Hutch, Due Date and both The Hangover movies – Phillips was knee deep in toilet rock drugs and faeces as he toured the US with G.G. Allin and the Murder Junkies for the documentary Hated 1994. 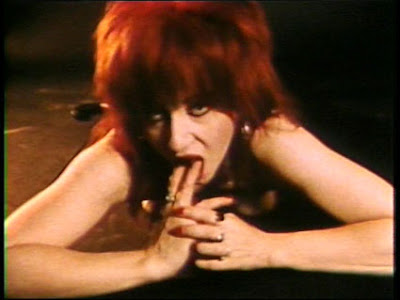 But back to Kern, during the first period, 83-87; his most important movies where made, stuff like The Manhattan Love Suicides, The Right Side of My Brain, King of Sex, and the magnificent Fingered. Among the cast members you will find cult figures like Lydia Lynch, J.G. Thirlwell (aka Clint Ruin, aka Foetus), Nick Zedd, a young Henry Rollins and Lung Leg. It’s also during this time period that Kern starts hanging with rock band Sonic Youth – who along side other alternative acts such as Foetus, Killdozer, Butthole Surfers and Cop Shoot Cop frequently are featured on the scores to the movements movies. Provocative and eclectic music for provocative and eclectic films At times the imagery, eclectic force and imagery of the movement all come off as destructive music videos, something Kern went on to direct several of as the years passed by. Sonic Youth (Death Valley 69, Goo), King Missile (Detachable Penis), Marilyn Manson (Lunchbox) and more recently Dentata (Earwig). 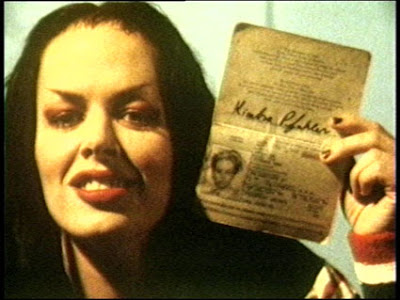 After cleaning up, in late 89-90 to now, he made the body of work for which he is most renown today, his photography much of which has graced the covers of many a cultural magazines and publications. Although where he’s obviously steered his career into sill photography, he still directed the odd short movie every now and then such as Sewing Circle, a hypnotic body modification/ performance that see’s star of Nick Zedd’s War is Menstrual Envy 1992, Kembra Pfahler, have her vagina sewn shut by two other women. (Yes, this one is part of The Hardcore Collection now, and it was missing from those German VHS’ tapes once distributed by Jörg Buttgereit's producer Manfred O. Jelinski back in the nineties.) 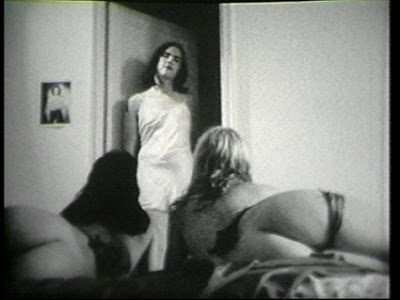 The Hardcore Collection gathers some of the finest works created by Kern, and should definitely be part of any true cineaste – or alternative film historian’s movie archive. I can’t express the same enthusiasm over the Extra Action (& Extra Hardcore) disc, as the shorts on Extra Action more or less are movies made up of the models Kern shot still photographs of, moving about in suggestive ways. Like his shoot captured on video, and quite possibly as he shoots them for the Taschen book Action – with which the DVD “Extra Action” originally was included. Although the films do have some great scores by Thurston Moore of Sonic Youth and the Njuta Films release is worth picking up for the bonus movies as there are several early shorts on there, some of which haven’t been released before. 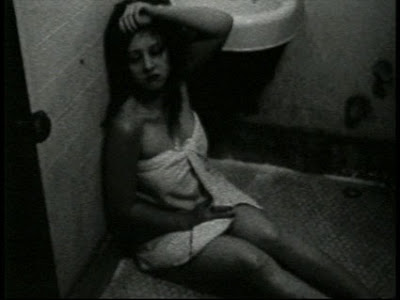 Kern described his filmmaking with the following passage: “I take what interests me in the movies and put it in shorter format so I don’t get bored. What interest the America public are sex and violence and the seamy side of life. Most people don’t have those in their lives, so they go looking for them” in more than one way, you will see this when you divulge into The Hardcore Collection (and bonus features on Extra Action & Extra Hardcore), are a time capsule unlike any other, and something that absolutely puts contemporary low budget filmmaking to shame. I love The Cinema of Transgression, it's the punk rock of filmmaking, punk rock with tattoos. 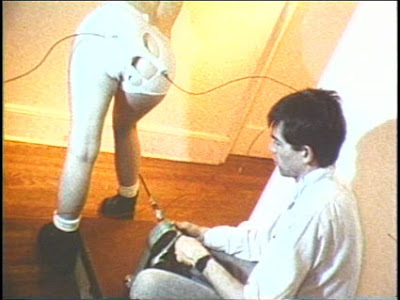 Now I only wish that someone would compile and reissue Nick Zedd’s works in the same way too, because you ain’t seen nothing until you have seen Zedd’s masterpiece Police State 1987, the surreal Thrust in Me 1985, Geek Maggot Bingo 1983, or the mastodon performance trip War is Menstrual Envy 1992.

Now enjoy some Kern directed Sonic Youth as you wait for your order to arrive!

Cheers for alerting me to this shit. Gonna grab me some Kern right away

Still reading this but thanks. I have these and some other of Kern's films and find them pretty interesting. Not somethi8ng I would show guests who drop by (as if that ever happens). reading over your article and appreciate some of the background. Good job.