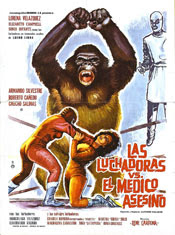 René Cardona, director of such classics as the award winning fantasy/family movie Santa Claus 1959 (which sees Old Whitey team up with Merlin to take on the devil who wants to wreck X-mas) and the harrowing Supervivietes de los Andes (Survive!) 1976, and father of René Cardona Jr., actor, director, writer of stuff like ¡Tintorera! (Tintorera: Killer Shark) 1977, and Guyana: Cult of the Damned 1979. For the magnificent female wrestler fun fest Doctor of Doom, Cardona Snr. joins forces with writer Alfredo Salazar for a dynamic tag team, and the results are once again pure fucking magic. Together the team of Salazar and Cardona made some of the best mexploitation flicks ever… try La horripilante bestia humana (Night of the Bloody Apes) 1969 and La mujer murciélago (The Batwoman) 1968 and Santo en El tesoro Drácula 1969, on for size and then tell me that these guys didn’t have some magic going. 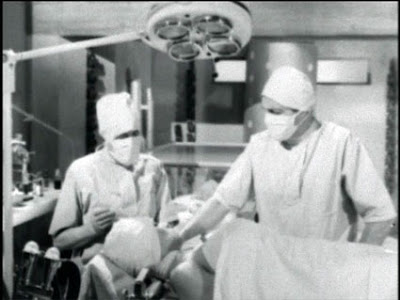 An enigmatic Doctor R., [Roberto Cañedo] is determined to complete the first brain transplant, and goes about kidnapping young busty women with the help of his goon Gomar [Gerardo Zepeda – a big buff guy who starred in several other Cardona flicks as well as Alejandro Jodorowsky’s El Topo 1970, Alex Cox masterpiece Highway Patrolman 1991 and Alex de la Iglesia’s Perdito Durango 1997]. Gomar is a brutish beast with the body of a wrestler, and the brain of a gorilla, the tragic result of a previous experiment… After yet another failed brain transplant Dr. R. decides that he needs to stop experimenting with common street girls and go for someone with higher intelligence so that they can appreciate the experiments and not die of the shock following surgery. Hot hellcat, luchadoras, Gloria Venus [Lorena Velázquez – one of the essential female Mexploitation actresses, who played anything from bad girl, to luchadora to evil vampire queen] get’s drawn into the mystery when her friend Alicia goes missing, leading her right into the stern flirtation of Detective Arturo [another Cardona regular; Armando Silvestre]. There’s been a string of dead women found during the last couple of months, and the detectives suspect that there might be foul play at hand… you don’t say. 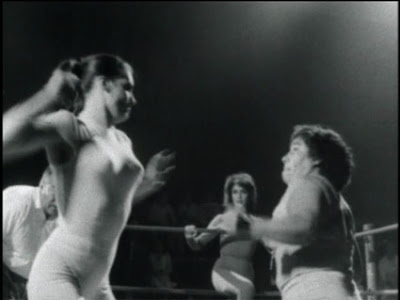 Back at the gym, Venus is introduced to a “new girl” who has come to train with them, none other than Golden Rubi [American Elizabeth Campbell in her first of a string of Mexican Luchadora films. She’d star as Golden Rubi in at least three other movies after this initial one, before disappearing from the movie scene in 1970]. The Doctor’s experiments on the “intelligent” girl fails too, which has him set his sights on a woman with a strong physique. You guessed it, he goes after the two fighting females and this starts off a series of fights, flights and dramatic meetings where acid is thrown in faces, characters are set on fire, scarred for life, and after a shocking reveal of the Mad Doctors identity, he creates his masterpiece female wrestler Vendetta, and true to the genre’s formula they all end up climaxing in one final fight. 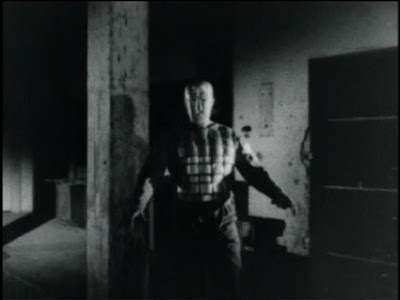 Mexican wrestling movies hold a special place in my heart – hey, I don’t have a half sleeve tattoo of Blue Demon for nothing – I love everything about them, the fights, the semi-tame acting, the quasi effective monsters and foes, their great pulpy soundtracks and the ever repetitive structure that comes with these movies. It’s just like watching a Giallo, an generic slasher or even a Godzilla flick – they all follow the same path, the structure is the same no matter what and if you’ve seen one, you are prepared for the rest of them. 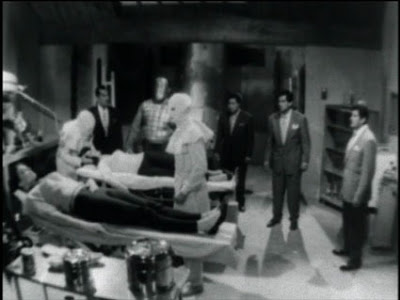 Doctor of Doom is no exception. Being the first in a string of Cardona/Salazar wrestling flicks featuring Gloria Venus and Golden Rubi, it kick starts from the first scene. The initial attack sees Gomar jump out of the shadows and lay his hairy hands on a woman who screams as the movie shifts into the credits. Staying true the subgenre’s formula, the credits take place over a fight, it’s Gloria Venus beating the living crap out of her foes in the ring. Now this print being an Americanized version produced by K. Gordon Murray - you know the drill, buy something cheap outside of the US, redub it and sell it again rehashed for an American audience - the US titles are superimposed over the fight. Normally there would be some arty illustrated titles followed by this fight. Because this is all formula, as these fights are to establish the protagonists of the movies. They always win despite faux danger of facing defeat in the ring. Antagonists be aware, these hellcats kick ass. 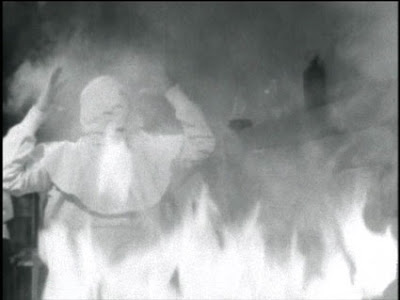 Generally Lucha libre, or as in this case luchadora movies, are firmly built around an investigation plot, the most important ingredient is obviously the wrestling – as proven with the bookend fights and frequent bouts with foes throughout the movies. But what makes the genre so unique is the concentrate of genre traits that always form the movie - there’s three legs the genre relies upon – the investigation plot and the wrestling, then the third is the blending of other genre trait such as the horror themes, the science fiction traits, the supernatural, folklore, mad scientists, space invaders, living dead conquistadors and Aztec mummies. There’s almost nothing that these wrestling heroes haven’t faced, fought and defeated. 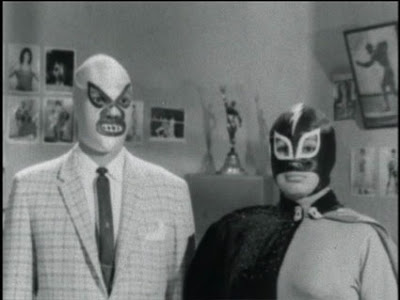 Just like the films of Santo, Blue Demon, Mil Mascaras and others the Luchadores take on the part of the amateur sleuths or helping the police. In the Golden Venus series, Venus and Rubi are something like girlfriends to the two detectives Arturo and Chema [Chucho Salinas] but also kick ass and help to solve the mystery of Doctor of Doom. 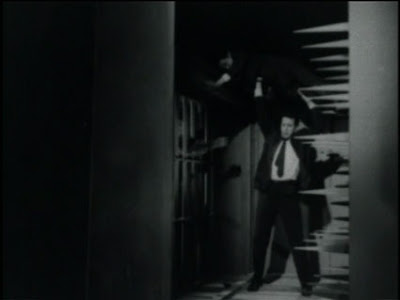 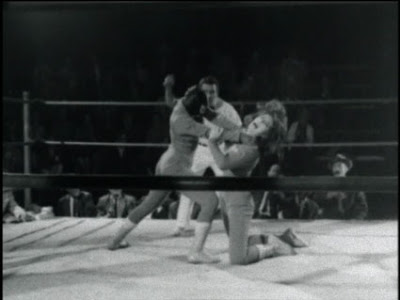 It’s always the directors of these cheap exploitation films that we remember. Say the name René Cardona to a genre enthusiast and they will more than likely have at least one reference point or two. Although I’m still pushing for writer recognition, and Alfredo Salazar needs to be hailed as the one of the important Mexploitation screenwriter he really was. Not only did he write close to a hundred movie scripts, but he also directed a bunch of pulpy rock’n’roll comedies/dramas, and did a lot to lay the foundation from which most future Luchadora movies would be told. The formula or structure I discussed above. Just as I always see Gustavo César Carrión’s soundtracks as a verification of quality, I look for Salazar’s name in the credits, as this also is a confirmation that I’m not going to be disappointed. Alfredo’s brother, Abel Salazar, was an actor, and can be seen in many of Fernando Méndez movies. Movies often penned by that other master of Mexican genre cinema, Ramón Obón.

Thank you
Your blog is very nice and informative.
SEO services Delhi