Monsters of Film [The wrap-up]

So the Monsters of Film festival rolled out its blood red carpets this past weekend and screened no less than 26 films during it’s four day run. Needless to say I love this shit, I LOVE that there finally is a genre festival in Stockholm, I love the immense amount of work the few people responsible have put into this to make it a great festival and one that had me thinking, Nooo, I want more, don’t stop now as Sunday night wrapped the festival up.

Here’s a blitz of what I saw and I promise to get back to some of these films for wider more in depth reviews as time passes, but here’s a wrap up. 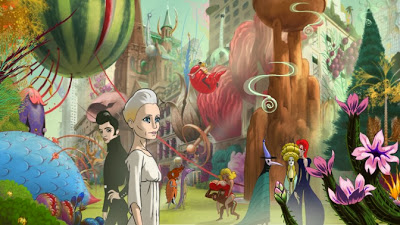 Directed by: Ari Folman
Opening film of the festival. Trippy, arty, somewhat pretentious but  at the core, a really nice story about identity, family and love. Told partially real live action, partially animated fantasy. Something that may seem out of place for a “horror” themed festival, but just one example of the versatile programming this festival has. All in all a cool little movie which didn’t chicken out when Robin Wright travelled to cartoon land, but went absolutely space monkey. Based on a Stanislaw Lem story, time travel movies and animation screw up your head. 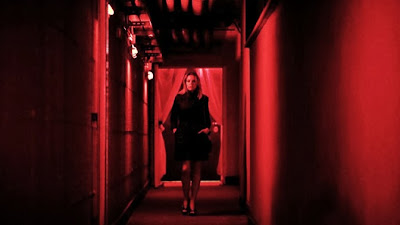 Tulpa
Directed by: Federico Zampaglione
Yeah, Zampaglione’s Giallo wet dream! Checks the boxes as it goes along, sensual, violent, bloody and at times completely off the map, but that’s what we want from Giallo. I’ve said it before and will do so again, if this had been made “back then” you would have known it as a classic. Full review here. 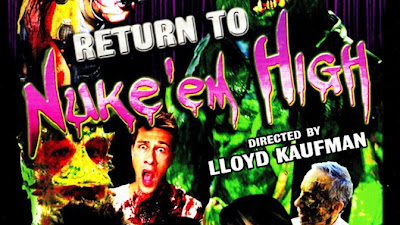 Return to Class of Nuke ‘em High
Directed by: Lloyd Kaufman
You know, I’ve had a life long love affair with Troma. I saw Toxic Avenger very early (anyone else remember that puffy 3D VHS cover?) I’ve met Lloyd Kaufman several times, and I constantly rant on about supporting independence. There is no beacon that tries harder to stay independent than Troma. For 40 years Kaufman and Hertz have been fighting to stay alive and out of the waters of the big fish. So when they release a big project like this you have to support it, and you always know what you are going to get from a Lloyd Kaufman directed Troma flick, Naked Gyno Americans, Penis mutilation, splatter slapstick, comedic violence, environmental themes and Lemmy. The students’ of Nuke ‘em High are back and the toxic waste creates a whole new generation of mutated fiends with an appetite for destruction! Split into two parts Vol1 and Vol2 with an spectacular Carrie-esque cliffhanger that will leave you screaming for part two! Long live Troma! 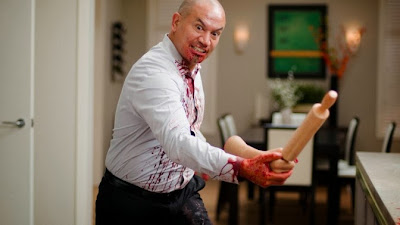 Fresh Meat
Directed by: Danny Mulheron
Horror comedy form New Zealand! A band of bandits bust their leader form jail and take refuge in a house in the suburbs. The only problem is that the hostages are a family of Cannibalistic Maoris. I was expecting more from the guy who was one of the co-writers on Peter Jackson’s Meet the Feebles, but instead we got this rather feeble flick which I feel missed the bullet on more than one occasion. Although I still think that my anticipation may have been a tad to high as the audience seemed to enjoy this one more than I did. 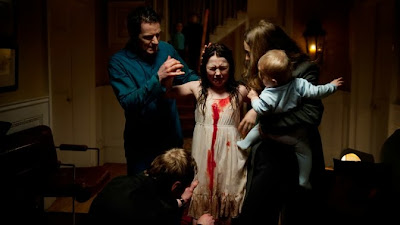 Dark Touch
Directed by: Marina de Van
Ok, weird beard. Well really, no beard, just weird. At first I was like “Huh?” but then I let it sink in and worm it’s way into my head. This incest and child abuse story may move slow and may be more suggestive and metaphorical than effect and in your face, but damn, it does look awesome with it’s brooding darkness and eerie shadow play. It also brings an interesting twist to an area that partially is something of a convention. I really found the idea of telekinesis as a tool of vengeance to be cool, especially as the main character herself wasn’t aware of it and interpreted it as the house being haunted! Speak about repressed emotions, and you know that when she understands them and the power she holds, the shit is going to hit the fan! Being a low-key movie, shit hits the fan but in a small, but still a disturbing way. Intriguing flick definitely worth a second viewing! 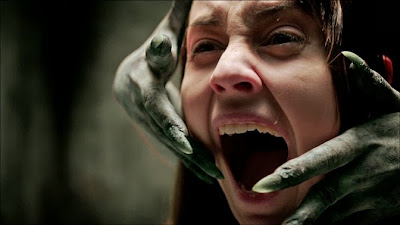 Evangeline
Directed by: Karen Lam
Feminist Horror, interesting! So how would you make a rape/revenge film from a feminist point of view? The answer is found in Karen Lam’s Evangeline! Mixing horror with a varied number of themes from an equal amount of subgenres – rape/revenge, supernatural, elements of Asian-Horror – Evangeline is a delicate and provoking piece of film and in some level it works it’s way under my skin as I want to kill every fucking sleazebag frat boy who ever sneered at a young woman – that’s also one way of using genre to raise questions. There’s some rather interesting characters in Evangeline too, like the serial killer who works out naked and has a dirt phobia and the entire backstory of Eva and her loss of faith… in a way you could say that she turns to the dark side! Evangeline is an exciting way to look at, and tell, a done to death bundle of horror sub niches.

Viscera Film Festival Short Package
Directed by: Various
Ok, so continuing the theme of female filmmakers the Viscera short film programme was a really cool ingredient to this festival as there should be more spotlight on female filmmakers and their versatility is perfectly showcased through the six short films programmed in this section. Some of them dreamy some of them funny some of them smart and some of them arty. And Karen Lam’s cool and quirky The Meeting. But the best part still has to be the guys next to me realizing that the images shown over the heartbeat sound in Rachel Deacons A Fever and A Dream where not open-heart surgery, but an extreme close-up of a speculum widening a vagina and what we where seeing was a pulsating cervix! Now THAT’s a way to freak out your male audience, and with all right, as this genre is all about telling stories and freaking people out. 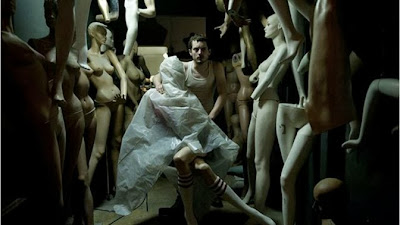 Maniac
Directed by: Frank Khalfoun
Seriously, the more I watch this fucking film the more it grows upon me. Where a lot of remakes force feed “character backstory” down ones throat in vain attempts to manipulate the audience into feeling for the “monster” Maniac does this naturally by the chose of casting, dialogue, music, backstory, fuck, everything. There’s no ways that you cant help finding yourself in that emotionally awkward space where you really want Frank to get Anna and live happily ever after, screw his mental issues and the room full of corpses, just let this poor sod get some love. It’s a case of the audience being emotionally engaged instead of emotionally repulsed as we are in the original. As far as remakes go, Maniac is one of the best horror films ever made, a Psycho for the modern nihilistic age! Full review Here 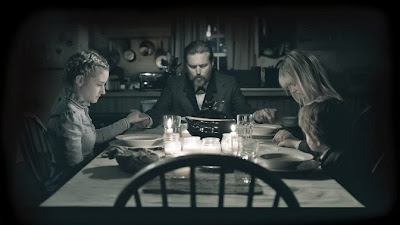 We Are What We Are
Directed by: Jim Mickle
Brilliant. Brilliant is all I can say about Mickle’s adaptation of Jorge Michel Grau’s impressive debut feature. Mickle’s has taken that Mexican dark comedy and transformed it into an ominous piece of American Gothic. It tells the tale of a family of cannibals and how their relationship deteriorates when the mother passes away. The investigation plot part of the narrative interweaves with the somewhat coming of age and making life changing decisions leads the film towards a space you know is going to be profusely dark. An amazing film, great story, beautifully shot and a powerful ride, do not miss We Are What We Are! 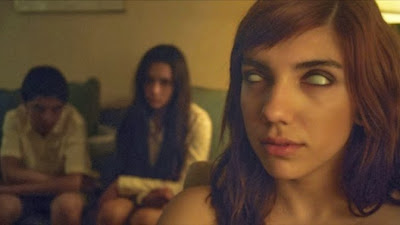 Here Comes the Devil
Directed by: Adrián García Bogliano
Ok, so compared to his films I’ll Never Die Alone, Cold Sweat, Penumbra and B is for Bigfoot in The ABCs of Death this one may be something of a step down. Perhaps mostly on the budget side, story wise I’m sure Bogliano could have made magic with a bigger bag of cash. I’ve seen it happen to others, and I think that the case is the same here, being part of ABC’s drained them and the film to follow is a desperate attempt to get back to what is “theirs” trait wise, even if it’s for a lesser buck! Here Comes the Devil tells the tale of a mother and father who after a trip up a “mystic hill” start to realize hat there is something terribly wring with their kids – Cheap, exploitative and Mexican. Wacky in all the right ways, broody and creepy atmosphere, it’s like watching telenovella version of the Exorcist but with more kids and  naked people! 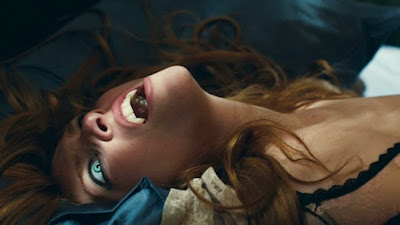 Kiss of the Damned
Directed by: Xan Cassavetes
Vampires, progressive music, dreamy narrative, guilt, yearning and melancholic characters, no it’s not a Jean Rollin movie, but damned close. Telling the tale of Paolo and Djuna who meet by chance fall head over heels for eachother and look to have the most promising life for all eternity together, shit hit’s the fan when Djunas manipulative and sardonic sister Mimi arrives. Xan Cassavetes delivers a suave and lush vampire tale, which I find, stands out amongst the competition due to the no frills approach. There’s a gentle delicate touch to the story, the way it’s told and the way things take place that definitely echoes classic EuroGoth. Full review Here. 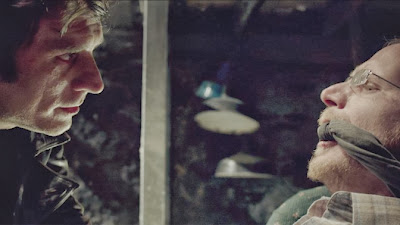 Big Bad Wolves
Directed by: Navot Papushado & Aharon Keshales
A paedophile child killer is on the loose and police officer Miki is certain of who he is. Despite a rough interrogation, the police are forced to let him go, much to their dismay. Miki’s given a final shot sanctioned from his boss to get a confession out of the suspect, but what they don’t know is that one of the victims fathers also has a dark sinister plan on how to get a confession out of the suspect! Big Bad Wolves really raises the bar on playing with the audience emotions. Without spoiling anything, this film takes all your laughs, and voyeuristic bloodlust and rams it down your throat. Big Bad Wolves is one of the smartest, slickest, darkest and fascinating movies this year, if not THE best film this year.

Monsters of Film, four days, 26 films, and 100% fun. I raise my hat and cheer the arrangers, because this was just what Stockholm needed, it's very own genre film festival. This modest start is a small step for Wo-Man, but a fucking leap for genre fans!


I'm already looking forward to the next time.