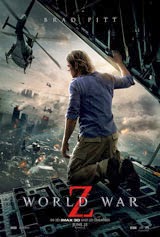 Ok, so why take a bestseller book and take out all the good bits? Ok, so it may not have been a best seller (well it was, it spent four weeks on the NYTimes bestseller list), but it was a complete hit amongst the genre fans and everyone read it! Ok, so perhaps not everyone read it, but it certainly made a lot of people who wouldn't normally read books, pick one up, and that word of mouth acted as an oral trailer for the films when it was announced. Ok, so why make a trailer that shows such a state of panic and total apocalypse and then make a frail little gore less film? Ok, so gore less may be wrong, there is a small amount of gore, but even stuff like True Blood, Hannibal, Game of Thrones, The Walking Dead has more gore in one episode than this two hour slug. Ok, so it may not all be a slug, some parts are rather intense, but they still never really make me care. Ok, so Gerry Lane's [Brad Pitt] family is on a boat, then kicked off a boat, but his high and mighty power friends would have saved them if they really had the power. Ok, so they might not have had the power, but neither did I after they built this family and values –even saving the poor, poor kid next door from a life in hell – only to stick them on a fucking boat where everything was hunky dory. Ok, so it may not have been hunky dory, but the only threat was to be tossed into a refuge camp surrounded by armed guards and that doesn’t really give the impression of danger! Ok, so it may not have been danger, but the loss of their fucking high and mighty friends benefits that where taken away and that kind of made me hate the family on the boat – and the kid who they saved but never really showed ever again – and all the drama they where causing. Ok, so it may not have been drama, but of all the missions Gerry Lane had ever been on, why the hell did his wife have to call him at work on this one? Ok, so it may not have been work, but it was, he was on a mission (from God) and she ruined everything by calling him, and that lead to Gerry Lane having to travel all around the world to save the day. Ok, so it may not have been travelling all around the world, Brad’s wife Angelina does a shit load more of that in the Tomb Raider films, and she finds treasure at every single place she get’s to, climaxing in one giant adventure fest in the last act. Ok, so it (as in WWZ) may not have a big booming climactic adventure fest in the last act it kind of just fizzles out in that - keep the monsters that climbed the biggest wall in the world by creating a human pyramid, but cant push through a door sealed by two trashcans and an office chair - Welsh medical research place. No evolving undead in a medical research lab! Huh? Did these people never play Resident Evil? After all they left Brooks at his name in the opening credits. Adding insult to injury, Gerry Lane makes a chance decision, shots himself full of deadly disease and saves the world! Ok, so it may not have been a lethal disease, but wouldn’t it have been so much more ironic if he found the cure in the diseases, but at the cost of his own life!

Nah, to me this was more like World War ZZzzzzzzzz…… If I wanted to watch an action flick I would have picked an action flick…  I wanted mind-numbing nihilism and the end of the world! Not an everyone dies but the good guys Disney caper with barely hidden political butt munches. With the lack of gory human mutilation, the complete abundance of nudity, eroticism or sex at all, the only person to get fucked was Me, You and Max Brooks! (And NO, no unrated, extended or alternate ending release will make me change my mind)

Great review, the BR does have added gore but to what avail?

I myself saw a $200 million zombie fim with no headshots, bites or nihilism.

The Vanity Fair damage control article is worth your time, also the earlier scripts.

Brangelinas intentions were good but event cinema economics are far removed from the Plan B comfort zone of indie fare . Killing Me Softly is a sublime piece of cinema btw.

Brad did not want zombie rambo but a homage to the disaster films of his youth, The Towering Inferno and Airport.

Zombie Dark Thirty it was not, the Dr Who Welsh leisure center finale cost $20 million!

Love the blog, keep the faith. Johnathan Glazer directing Under The Skin could push thinking horror mainstream, the book is excellent.

Thanks!
And thanks for the recommendations, I will check them out!