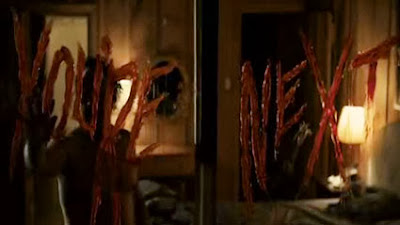 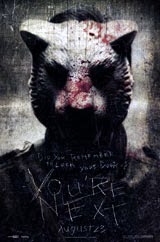 Home invasion films are a sub niche that has grown strong and powerful these last couple of years! Personally it’s among my favorite as I once was a victim of home invasion. A woman I’d never met before was in my apartment in the middle of the night and even though I managed to get her out, call the cops and change all the locks to my doors, the scars left where deep, hence this being the genre that creeps me out the most, which in my book, makes You're Next one of the most tantalizing creep-flicks this year! 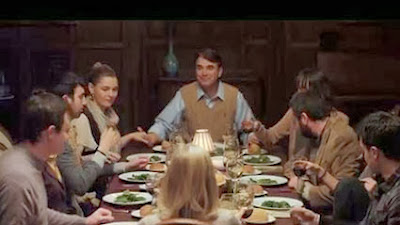 A family gathers in a remote house to celebrate the 35-year anniversary of their parents. Outside a band of homicidal predators put the house under siege and start to minimize the number of family members one by one.  What they don’t know is that one person on the inside knows more about survival than they had reckoned on.

It’s clear that Adam Wingard knows how to get an audience to invest in his characters and story, and he does it almost by the book. This is a good thing and a trait that serves Wingard well. It’s definitely one of the reasons this mumble core - horror filmmaker is considered part of the horror genres future. Well, OK, Wingard is a fucking great director, but kudos needs to be given to Simon Barret too, because Barret is a pretty important part of the Wingard success, as Barret writes the scripts to Wingard’s movies. A Horrible Way to Die, Autoerotic, You’re Next, V/H/S, V/H/S/2, all Barret. 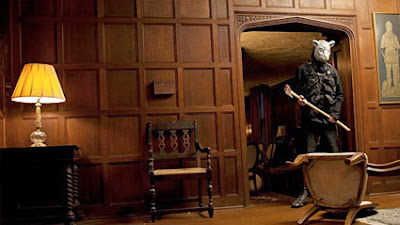 You’re Next starts up with a raw initial attack to set the tone; a couple in their post coital state of sweatiness become victims of an off-screen assailant. When we finally get to see the killers, they hide their faces behind childish animal masks. This presents the threat in the outside world, a threat in the dangerous place outside the safety of indoors. The masks make the threat more inhuman, and it also plays on genre convention – , the masked monster, the confusion of an unidentifiable assailant, the defaced killer who we are supposed to guess the identity of. Most likely the use of animal faces made for children is a way to take a harmless object and fill it with danger, doom and death is an ironic decision. Something cute becomes an object of terror.

The title of the film is presented in an Apocalypse Now kind of fashion – scrawled across an object instead of classic graphic vignette, although this time it’s blood on a window. It all adds to building the threat and allows perfect polarization against  the presentation of our lead characters Crispian  [AJ Bowen] and Erin [Sharni Vinson]. Crispian and Erin are on their way to Crispian’s parents, and we quickly understand that this is the first time Erin is to meet them. We also learn that Crispians parents are filthy rich, that family gatherings are few and that there are “certain issues” within the family. Erin is secretive about her background, which will be put into focus later on in the narrative. Cut to mother and father who enter their new home, the same home where the family gathering is to take place at. Paul [Rob Moran] and wife Aubrey [Barbara Compton] step up to the front door of the house only to find the door unlocked! In the following ten minutes the house becomes something of a McGuffin as it groans and creeks, suggestive camera angles show POV shots out of door openings, and windows. The tension builds, eventually sending Aubrey screaming out the front door convinced that there’s someone in the house… Paul does an obligatory and half-hearted check of the house whilst Aubrey cowers outside, giving Wingard a perfect moment to build anticipation and toss the real first jump-scare at us. It’s an effective one and it’s needed as the next couple of minutes are going to be spent branching out the family and cast. 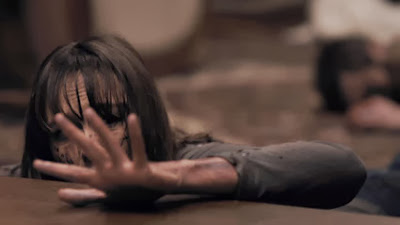 This is time spent building up the hierarchy and dynamics of the family unit consisting of elder brother Drake [Joe Swanberg], complete with bully mannerisms and narcissist wife Kelly [Sarah Myers], hipster chic little sister Aimee [Amy Seimetz], her boyfriend Tariq [Ti West – yes, director of The Innkeepers and The House of the Devil] and baby brother Felix [Nicholas Tucci] and his girlfriend Zee [Wendy Glenn]. Character traits are rapidly exposed and in a way this is almost similar to the obligatory archetype presentations found in generic slasher - and college films, we understand the dynamics and how Drake bullies and manipulates them all, holding an reign of terror upon his siblings, all with the support of mom and dad, who are smugly pleased and teary eyed over the fact the they finally managed to get their children all together – despite all their internal issues and conflicts.

In all honesty, the family are perhaps not characters that get any sympathies from the audience – after all this is a horror shocker and we just want the carnage to start - but there’s some form of emotional recognition with Crispian and his constant underdog positioning.  We are also pushed towards feeling for Erin, who in contrast to all the others offers to help out I the kitchen and is the one to take command when the terror starts to intrude the privacy of their safe world. So with the basic structure, let us call it “The Ordinary World” established the tableau is set and it’s time to bring on the horror. 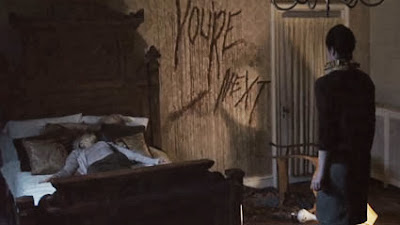 After a bout of “brotherly love” and “guilt tripping” (all great devices to use in horror) the ordinary world is shattered as the chaotic dinner party turns to violent massacre when crossbow arrows start being shot through the windows at the family, who now are reduced to a bunch of sitting ducks. There’s a shot of an arrow smashing into the framed photograph of the family sending shards of glass allover the place, a great metaphor for the destruction of the family unit, which this film is a representation of in more than one way. The realization that there’s an antagonist on the outside of the house sees the inhabitants start their fight for survival, and this could have been good enough to get the game underway, and wind tension up. But we know that there’s someone inside the house too, which increases the threat and makes the narrative even more suspenseful… when will they pounce and how hard will they hit!?

Oh, if they’d only listened to mother!

The masked assailants hit hard and ferocious and at times the violence is really sadistic and grim. At the same time there's a dark comedic undertone that flows through the film, something that one could consider a trait of Wingard and the mumblecore horror scene. Not slapstick or schtick, but more small things in life that are funny in their everyday way... or absurdity such as a blender to the brain!

After the dining room attack the movie really shifts gears and goes “all in” on the Survival Horror themes. Classic protagonist vs. antagonist traits presenting characters to root for and others to question, and manipulating the audience into each now shock/gore/death scene. Our voyeuristic sadism gets what it’s craving and at the same time we find a strong protagonist in one of the characters. Perhaps it’s not all that original, considering the conventional genre roles in horror, although this one has a logic and backstory to it that I found satisfying. Nobody becomes a superhero in the flash of an eye, it’s all planted along the narrative, as is reveals of what really is happening to the family. Tidbits of dialogue dropped along the way and seemingly unimportant acts all tie into the movie further down the road, and this is where I find the skill of the Barret/Wingard cooperation as details all come together as rushes of insight hit the audience.

An interesting scene is found somewhere in the second half, where a specifically violent and sadistic axe to the head beating, sees the masked killer almost being nauseated by his own acts. He gags, grunts and has to sit down on the sofa after the deed. This was fascinating, as I never earlier have seen a scene of violence where the dark hearted antagonist almost instantly is quenched by his/her own guilt. That’s what I kind of liked with the way the movie climaxes to as it forces characters to question their morale and judgment, just as it makes the audience ask the same questions. How far can you go in doing wrong for a good cause? 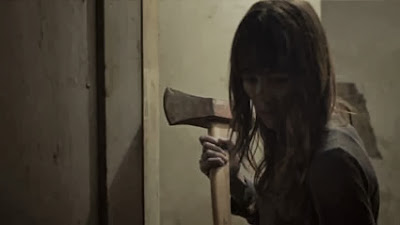 You’re Next is a spectacular example of contemporary horror. It takes the familiarity of the home invasion sub genre and brings a number of interesting new ingredients to it, and for once I’m actually glad to knowing what drives the killers, why this is happening, and watch a movie that does deliver some kind of closure at the end. All truths are revealed, and the truth hurts! With that said, You’re Next is in no way a movie that holds back on the nihilism, rather the opposite, it is dark, unpredictable, ominous and will make you think twice about attending family reunions for the rest of your life!

A slice of horror cinema served up in the best possible way, You’re Next hits Swedish cinemas 15th of November! Go see it, because we don't really get this kind of genre fare on screens here all that often!