Born in Rome during the last half of the twenties, Lucio Fulci started working with films just after the Second World War, and spent some fifteen years working with Steno, one of the Italian masters of comedy. His main tasks were writing screenplays and being an assistant director on several of Stenos movies.
His first personal venture into directing came in 1959 with the crime comedy "I Ladri" (a.k.a. The Thieves), which unfortunately didn't do much to impress critics or movie goers, even though top Italian comedian Toto had the lead role. Fulci followed it up with a few more comedies and a spaghetti western between 59-69. Among these one can find the somewhat strange "Urlatori alla sbarra" (a.k.a. Howlers of the Dock) with suave jazz player Chet Baker as one of cast, and "Tempo di massacro" (a.k.a. Massacre Time) with Franco Nero in the lead role.

In 1969 the films "Una sull'altra" (a.k.a. One on Top of the other) and "Beatrice Cenci" (a.k.a. The Conspiracy of Torture) see Fulci starting to leave out comedic elements and move towards more hard crime/thriller/exploitation themes. In 1971 the early sexy Giallo "Una Lucertola con la pelle di donna" (a.k.a. Lizard in a Woman's Skin)

saw Fulci finally reaching the form we eventually came to worship. The impressive special effects, here by Carlo Rambaldi, the thematic soundtracks, this time provided by Ennio Morricone, Luigi Kuveiller's cinematography, and finally, but not least, Vincenzo Tomassi's editing. Tomassi stayed on as Fulci's regular editor for the rest of his and Fulci careers.

Fulci soon found himself in trouble with "Lucertola" as a lawsuit was slapped against him for the violent visual effects of slaughtered dogs seen twitching on a table. These were presumed to be real, so Rambaldi and Fulci showed the props and were let off to go about their movie magic, and boy was there more to come....

Between 72 -78 he made a few more crime movies, a few comedies, some adventure movies (the White Fang movies freely based on Jack London's book) and few more spaghetti westerns "Sella d'argento" (a.k.a. Man in the Silver Saddle) and "I Quattro dell'apocalisse" (a.k.a. Four of the Apocalypse). Among the movies made during this period is the 1972 satirical thriller "Non si sevizia un paperino" (a.k.a. Don't Torture a Duckling), which was blacklisted for a few years as an Italian politician thought some of the themes in the film were making fun of him. In "Paperino", Fulci returns to violent murder and even a good old chain flogging are among the few, but shocking effects to be found. Not surprising, as this is the first time Fulci and special effects wizard Gino De Rossi work together. The other title among the 72-78 movies to stand out is the gem from 1977

"7 note in Nero" (a.k.a. "The Psychic"/"Murder to the Tune of 7 Black Notes" is the uncut presentation of this title). The Psychic can best be described as a thriller/horror with Poe influences. Jennifer O'Neil stars as psychic woman who sees violent murders recently committed... or does she? Classic Fulci gore is presented in all its glory. From the opening scene where a woman's face is smashed to pieces against the front of a cliff, the shocks just keep coming. For the second time Fulci collaborated with Fabio Frizzi, who's thematic scores can be heard on the soundtrack, the first time they worked together was on "I Quattro dell'apocalisse"

This brings us up to 1979, where the triumph of smash hit movie "Zombie" (the Italian title of George Romero's "Dawn of the Dead", (Dario Argento supervised the European cut) and the financial success of "7 note in Nero", landed Fulci in a meeting with film producer Fabrizio De Angelis. Running along with the zombie craze of the day Fulci created one of his best loved masterpieces "Gli Ultimi Zombi," (a.k.a. Zombie 2). Nothing was left to chance in this movie. Loads of decomposed zombies, brain shootings, flesh chomping, the infamous splinter in the eye effect and a total overload of Gianetto De Rossi's gory effects. Together with Fabio Frizzi's pulsating melotrone music, Sergio Salvati's magnificent widescreen cinematography, Tomasini's editing, the top-notch actors all blended together for one of cinemas most outrageous gore feasts. During the next three years, 79-82, Fulci made seven more films, and among these are the ones that definitely made him the 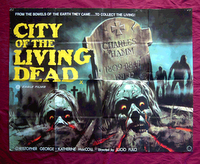 the two masterpieces "E tu vivrai nel terrore - L'aldilà" (a.k.a. The Beyond) and "Quella villa accanto al cimitero" (a.k.a. The House by the Cemetery). Notable for most of these titles was that Fulci had used his solid crew, Salvati, Tomassi, De Rossi and Frizzi, who all helped to make these titles small masterpieces of genre history. 1982 marks the end of the main, Fulci gore classics period with "Lo Squartatore di New York" (a.k.a. New York Ripper)

a return to the violent thriller genre and the horror /suspense piece "'L'Occhio Del Male" (a.k.a. Manhattan Baby The Possessed) which sports Hellrasier-ish bookends.

Although 1982 marks an end of the main gore period, don't for a second think that Fulci slowed down, on the contrary, he presented an assortment of

various genre flicks, Fantasy/Barbarians with "Conquista, La" (a.k.a. Conquest) in 1893, a rather weird movie with lots of atmosphere. In 1984 he ventured to SCI-Fi/Post Apocalypse with "I Guerrieri dell'anno 2072" (a.k.a. Fighting Centurions), a quick return to Giallo with "Murderrock - uccide a passo di danza" (a.k.a. Murder Rock - Dancing Death) about a maniac stalking and killing the girls at a New York dance school. The erotic S&M thriller "Il Miele del diavolo" (a.k.a. The Devil's Honey) from 1986 sees a young woman, Blanca Marsillach, kidnap and torture the doctor she holds responsible for her boyfriends death. The movie is not at all a gory Fulci movie, but proof that Fulci could move between genres as he pleased.

In 1987 Fulci returned to the horror genre, with "Aenigma". "Zombi3" followed "Aenigma" in 1988, which was to be the first of two unsuccessful comebacks for the maestro. Due to ill health Fulci pulled out of the project and Bruno Mattei took over the production (or was it Claudio Fragasso, only those there will ever know...) Even though it isn't a

"real" Fulci movie, it works and has some great zombie moments and other unpleasant gory surprises. Between 1988-1991 Fulci directed some of his weakest work ever, several of the movies were made for Italian TV, they are quite full of some trademark Fulci gore, but story wise they just don't work. The 1990 movie " Un Gatto nel cervello" (a.k.a. A Cat in the Brain) stands out as a sort of oddity where Fulci played himself, a old horror director, haunted by his films. Scenes of Fulci aimlessly wandering around, mixed with the gorier scenes from several of the previously directed TV movies and titles Fulci either supervised or produced make up a gory greatest hits package with out much story line, but it's good for laughs, as the gore just keeps on coming. Fulci's last film to capture the atmosphere and style he once mastered over, "Voci dal profondo" (a.k.a. Voices from Beyond) was made in 1991 and it's sadly the last film the great Godfather of Gore made.

Hold the presses, wake the dead, Fulci is making his comeback! Yes hopes were high in the second half of 1995 as rumours were spreading that Dario Argento had met Fulci at a convention, felt sorry for him and decided to make a film together. They wrote the horror mystery "Maschera di Cera" (a.k.a. Wax Mask) together and Fulci was to direct it under Argento's production. But the gods had other plans for dear old Lucio... Getting ready for his grand return to horror after a five-year departure, Lucio Fulci passed away on the 13th of March 1996. The Godfather of Gore had slaughtered his last victim. I'll never forget that day, because we where just getting ready to finalize the latest Art Video Club newsletter when a fax came trough from Germany where the guys at Hard To Get... (who released Umberto Lenzi's Eaten Alive, Ruggero Deodato's Cannibal Holocaust and Fulci's New York Ripper, remastered on VHS and Lazerdisc) who where in contact Fulci and his people for future releases. We called them back straight away as we took it for a sick joke, but they said it was true. I called up Alan Bryce at UK magazine Darkside as he'd been in contact with Fulci during several of the conventions Fulci had graced witht his presance and Bryce said that he'd just heard the rumours too. About an hour later he called back to confirm. Sad news indeed and a very dark day in horror history.

"Wax Mask" was directed by Sergio Stivaletti instead, and never left much of an impression. Although Fulci did get sort of a comeback in 1998 as Quentin Tarantino's Rolling Thunder Pictures, made sure that "The Beyond" was theatrically re-released in the states. Now almost ten years after his death, his films of the 79-82 period still stand the test of time and are easily among the most fascinating pieces of Italian Horror Cinema.
- November 12, 2006