Story:
Four scientists, Inge & Sten Hegler, Maj-Britt Bergström-Walan and Sture Cullhed, specialising in sexual studies get together in an apartment to smoke and discuss human sexuality.

Me:
One of the great Swedish classics with out any doubt. Banned in for being too explicit, confiscated by the customs and entangled in a 20 month long court case before it finally was acquitted, forcing Sir Cliff Richard lead a demonstration of 30.000 enraged Englishmen to protest against this piece of filth, you know it has to be something that makes an impression. According to rumour the movie was so strong that it made the head of the Swedish censorship board take three days off from work after seeing it. Ok, so by today’s’ standards it mostly just a laugh and pretty harmless. You’ve seen more explicit stuff on Discovery Channel and you won’t hear or see anything you didn’t already know before watching it. Unless you are a fucking virgin who has been living in a cave for the last thirty years. But thirty-seven years ago it was one of the first movies where visual and graphical acts of sexuality where seen on the big screen, and a seven foot vagina is enough to scare anyone. The set up, the doctors talking and discussing sexual behaviour is safe enough; they talk about sexuality, what it is and how it affects the human body. They illustrate various behaviours with a few tongue in cheek sketches with titles like Communication failures, Male vanity etc. The sketches move from fully clothed to semi nude and some skin is on screen after nine minutes. Then they work their way over to how the human body works, and this is where the fleshy bits get into shot. Both through animated illustrations showing how the body works and graphically detailed close-ups of human genitals. Male and female, no gender discrimination here. Foreplay, intercourse, birth control, they go through everything here in fully illustrated meaty close-ups. But don’t be ashamed my friends, nope, just remind yourself that this is a documentary, there’s nothing to be ashamed of! You have to hand it to Torgny Wickman and producer Inge Ivarson for actually making and getting this weird piece of celluloid on screen at all, even though it claims to be a documentary you can’t escape the fact that it is an exploitation cinema classic. I also have to point out that this movie is supposedly under its title “Swedish Marriage Manual” the film that DeNiro takes Cybill Shepherd to see in Scorcese’s Taxi Driver 1976 but even though they walk into the cinema under a billboard promoting Swedish Marriage Manual. But that movie is not Kärlekens Språk, even though it makes for a great anecdote.

Image:
Full frame 1:1.37. Digitally remastered from a restored 35mm print the film looks. There are a few scratches and noise here and there, but that just works with the movie. No subtitles.

Audio:
Swedish dialogue with a mono soundtrack, and if you buy this movie you’re not buying it to test your surround system anyhow are you?

Extras:
An eighteen minute retrospective with producer Inge Ivarson and Maj-Britt Bergström-Walan look back on the movie and its impact. A five minute photo gallery with images never seen before, from the shoot and the set. Film facts, biographies for Inge Ivarson, Maj-Britt Bergström-Walan and director Torgny Wickman. Also included are four hot trailers for other Klubb Super8 releases.

You have to applaud the guys at Klubb Super8, who for the past decade have been organising shows, hosting and visiting film festivals, keeping the wild and weird stuff on Swedish cinema screens. Through them I have personally had some of my best cinema experiences. For fucks sake how would I otherwise have ever been able to see Night of the Living Dead, Zombie Flesh Eaters, The Undertaker and his Pals and Evil Dead on the big screen? Actually get to meet Dave Friedman in the flesh or even see Flesh for Frankenstein uncut in 3D in with my wife in a Swedish cinema? No these guys are the real deal, after releasing Swedish rarities on VHS for several years they have taken an ambitious step into the world of DVD adding everything that they can get their hands on and digging out the lost stars behind these gems. Kärlekens Språk is the first of their titles and previewing the future releases to come these guys need all the support we exploitation fans can give them. Get out there and buy there discs right away.
- November 07, 2006 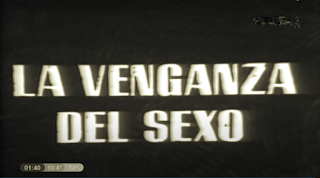