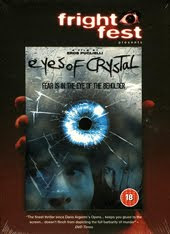 I try to stay away from contemporary neo-Gialli themed flicks. I find that they lack the grander of the real deal and quite often, like many other late eighties Gialli, focus more on naked chicks, sordid sexuality and predictable plots, and that I can find done better in other genres beyond the Giallo. Not that this need be a bad thing, but in my Gialli I prefer at least something that reassembles an intelligent, or enigmatic or even deceptive narrative so that I can become engaged by something that keeps me from falling asleep, or becoming offended by a predictable plot. Yes, I did seek out movies like Hélène Cattet & Bruno Forzani’s AMER 2009, Guillem Morales’ Los ojos de Julia (Julia's Eyes) 2010 or even Anthony Hickox Knife Edge 2009 (which should have been sold as a Giallo to reach a more appropriate audience, as it makes more sense being read as a Giallo.) - all reviewed or mentioned in my monthly magazine column* - so of course it does happen now and again. I also did pay attention to Kristian Petri's Gialloesque Ond Tro (Bad Faith) 2010 too, but for the most of the time, I'd rather watch something old that I've enjoyed before than go down that treacherous path of poor quality once again.

One afternoon at my resident movie mecca and cult temple of cool, Monkey Beach, the ever-present entity you may know as Ninja Dixon pulled Eyes of Crystal out from the shelves, stuck it in my hands and said - This is a movie YOU need to see. Said and done, and as I trust Ninja's recommendation it was a solid buy.

Opening with a very strong character presentation of Ispettore Amaldi [Luigi Lo Cascio] who bolts down alleyways, jumps fences and does near damned anything to catch his man; it's fair to say that this good guy cop is whom we are going to be rooting for. And who wouldn't as moments later, after a very stylish and genre typical opening montage, the villain of the piece is presented… The embalmer [Eusebio Poncela - if you figure it out from that you've seen a lot of spanish genre flicks.]. Needless to say in the polarization of the villain from the hero, nothing is spared. A young couple are having a shag as they are being watched by a pervert who starts to pleasure himself too. The embalmer is setting a trap with the intention of capturing more of the somewhat tacky specimens the titles sequence ends with, but instead the young couple, and the old geezer watching them, distract him. Producing a high calibre semi automatic weapon, the embalmer shoots not only, the wanking old bloke, but also the fornicating couple in violent and cold fashion. The corpses are left in the places they fell at the crime scene and when the police - Amaldi and Frese [José Ángel Egido] - arrive on location they pretty realize that the killer has an odd trait. He "fixes the wounds". The young woman shot so violently in the breast, left with a gaping wound, has apparently had her chest fixed and repaired as if she where an animal on display. This at first all seems like just a random oddity, but pretty soon they start to realize it's the killer’s modus operandi.

Secondary characters are introduced; Guiditta [Lucía Jiménez] and Detective Ajaccio [Símon Andreu], the plot deepens and the movie gets on the way. Bit by bit, the pieces fall into place and just as you want it the clues lead one way before flipping over and going somewhere else. Not to mention the several red herrings that Puglielli tosses at his audience. But what I found fascinating is that it's never trying to fool us, it's just keeping information in the dark that makes it such a damned fine ride. Everything chugs along fine, and the final act delivers some serious surprises and a welcome exploration of Amaldi's character that gives an insight into why he plays so hard, and is so thankfull for it. Remember that early scene where he calls up his colleague in the middle of the night just to thank him for having his back. That kind of stuff.

Throughout the piece Gialli traits are frequent and dominate the narrative style. You will be thinking of your favourite pre-eighties Giallo and then realizing that this goes beyond, it's not just a mediocre homage or pastiche, it's a full-feathered Gialli well worth checking out. There’s several moments that stand out and I'll say that my favourite passage of the movie is the entire "Dollmaker's death" segment. It's completely oozes of what this genre is all about, an unseen threat, a distraught victim, and cinematography that plays with the audience's imagination, and damn do they use all the mirrors in that location to perfection. It's THE key scene that I will base future recommendations of this film upon.

After watching Eyes of Crystal it's mesmerizingly obvious that Puglielli knows his Giallo, and Eyes of Crystal is a splendid homage to that greet genre. If not the, definitely one of the best neo-Gialli. Among the new names in the opening credits, I'm hardly surprised to find veteran, Franco Ferrini, amongst the writing team because this is a movie that breaths the same air and aura of his Dario Argento flicks Phenomena 1985, Opera 1987 and Stendhal Syndrome 1996. A powerful, potent and intriguing Giallo with all the trimmings. A killer kept outside the frame, hiding in the safety the off-screen space… and we all know what happens the moment he enters the screen space to reveal his identity now don’t we… There's a red herring in the shape of Guiditta's stalker, but perhaps most importantly and terrifically resourcefully used in Eyes of Crystal is the childhood trauma in the backstory to motivate the killer and his vile actions’. And the neat gimmick here is that they choose to tell it through a completely different character. Brilliant.

Three arcs are set in motion, the murderer mystery arc, Guiditta's stalker arc and Ajaccio's childhood flashbacks arc. They all come together neatly in the investigation plot as defined by film theorists. And it's the investigation plot that lies the closest to the Gialli as their leading character frequently are either professional or amateur detectives. In Eyes of Crystal we have a professional policeman who tries to solve the puzzle and this is well in line with many a grand old classics.


Our old friend guilt is here too, and in a big-time badass effective way too. In Amaldi's backstory lies a dark sinister tale, a tale that drives him further than the average cop. A dark tale of murder and loss that Amaldi blames himself for. So when the taxidermist murders start, the memories of that harrowing backstory resurfaces and he pushes himself harder than before - that not saying that Amaldi isn’t a hard-ass cop before, but the guilt of not being able to stop that initial killing in his backstory drives him harder as the taxidermist starts killing off his victims.

As I mentioned earlier, there’s also a childhood trauma that drives the killing spree, a trauma which all surfaces when the killer/taxidermist is offered to purchase a rare life-size mannequin, which due to the seller's relationship with the killers mother is offered at a fair price. As you may have guessed already the rather grizzly and violent murders involve the taxidermist stealing body parts from his victims and replacing them with parts of the mannequin. Sure one could perhaps have asked for more visual gore, but then at the same time it isn’t really needed and the aftermath itself is there in all it’s glory for the audience to awe over. In the last act the Guiditta stalker arc climaxes into the main narrative and we see what her purpose in the larger picture is. It sneaks in there and gives a pleasing little pay-off at the end.

Puglielli, Ferrini and the rest of the screenwriters have come up with a solid, watertight script, the cinematography of Luca Coassin – who went on to win several awards for his camera work after this movie - is awesome, and relies heavily on darkness, shadows and creative lighting. All traits we know too well from our beloved Giallo. This is a movie that contains some pretty damned impressive scenes, where many breathe old school Giallo, but at the same time live their own contemporary life. Especially when looking at things like how they ingeniously used the backstory arc, the way guilt has shaped Amaldi as a character, the triangular arcs that all come together in the final act and the last frames of the movie which present an explanation to the movies title. As you know half the fun of the really good Gialli, is figuring out what the name holds for referent in the movie.

Alan Jones’ cover quote “Watch out Dario Argento, director Eros Puglielli is after your chiller crown” still rings true. Nothing either Argento or Ferrini have come up with since Puglielli’s flick is anywhere near the brilliance of Eyes of Crystal

Nevertheless, Puglielli still has to follow Eyes of Crystal up with another feature movie, and I for one will be looking forward to it to make sure he's no one trick puppy. Now I only have to figure out how to get hold of those half dozen TV movies he’s directed since this one.

*(In forth coming issues of Cinema I gave Julia’s Eye’s 4 of 5, claiming it to be the best of the new wave of Spanish horror themed movies. AMER 5 of 5 as it’s a perfect homage. But you already read my piece here didn’t you so you know how much I like that flick.)

Extras:
There’s a “Making of Eyes of Crystal Documentary and “Sul set di” a short featurette.