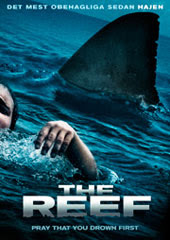 First, let me just say that no shark movie ever scared me as sodding bad as the original Jaws 1975 did the first time I saw it on video in what probably was the early eighties. We where sat round at my aunts, eating fish and chips watching this flick she had on video, and when Ben Gardner’s [Craig Kingsbury] head floated out of that wreck I was scared so profoundly that I didn’t even dare go take a piss afterwards just in case that head was in the bog. Needless to say, shark attack movies never really ever got to me in that way since then… Until I saw Joe Dante’s Piranha 1978 sometime later that is.

I was supposed to review Australian low budget flick The Reef for my genre column in Cinema a few months back, but the screener didn’t work and I was like “Whatever, it’s probably just another random shark attack flick not too unlike those I’ve seen before.” And in all honesty I’m not to fond of that specific kind of movie, despite easily wasting time on YouTube searching for shark attack videos – have you seen that Discovery show clip where the shark handlers leg is turned to mush? There’s Mondo for ya! Anyway, in their short YouTube form I can get right to the goodies and skip all the boring exposition and predictable climax’s that these films all play by.
My bad, as The Reef is much more than that.
Fairly straight story; a bunch of friends meet up and take a sailing boat round Australia's Great Barrier Reef. After some brief character set-ups the horror sets in when the boat surprisingly capsizes and they all end up in the sea. Two choices are pending: either stay on the overturned boat wreck or swim back to the island they visited the day before. Heading off towards the island it soon becomes apparent that they have company in the shape of a Great White which stalks them and finally goes to the attack...
The Reef completely caught me off guard; it surprised me, engaged me, scared me and really got to me. It is indeed a brilliant little flick, which I thoroughly enjoyed. I will most likely keep this one right up there with Spielberg’s classic and those beloved Italian rip offs.
One of the details that make this a fascinating flick is the use of an emotional backstory to bond the two lead characters together. In all honesty we don’t really give a shit about any other characters, and quite simply get caught up by the bond between Kate [Zoe Naylor] and Luke [Damian Walshe-Howling].
I’ve said it before, but even the most blackest heart of us all will subconsciously root for them to make it through, as we are all romantics at heart – or if you want a cynical take on that, we are all programed to find someone to mate with and keep the race afoot. It’s a Darwinian emotion that we live with everyday. Although we may never have the experience of swimming for our lives from a giant fuckin’ shark, we can have an emotional recognition with the feelings that Luke and Kate are having. First upon sort of awkwardly hooking up again, relapsing to past emotions, feeling doubt and then finally bonding again… Which is why the movie gets to us… it’s that emotional recognition, and I love the fact that traditional classic storytelling get’s a punch in its snout in the movies climax. 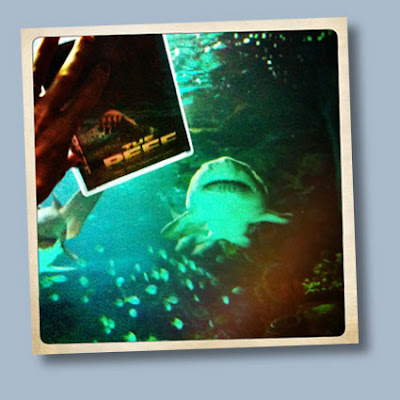 Based on a true story, like almost any freakishly big shark/crocodile/bear whatever supposedly has been these last few years, - and director Tranucki’s previous film Black Water 2007 about big ass crocodiles in the Australian mangroves, The Reef sticks out and with it's seamless mix of CG and authentic footage, top notch acting, identifiable values at stake and a powerful survival horror in the middle of the sea story at the core, this is the one I’ll be thinking about the next time I set foot in the sea.
Image:
Anamorphic Widescreen 16:9 2.40:1
Audio:
Dolby Digital 5.1 or dts 5.1, English Dialogue, Swedish, Norwegian, Danish and Finnish subtitles are optional.
Extras:
None.
- July 24, 2011

Glad you liked it J! This scared the shit out of me. My fave shark flick since "the big one" for sure.