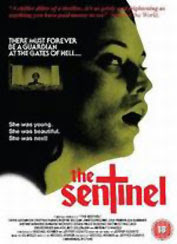 Wow. Sometimes you really do stumble upon “lost” masterworks and Michael Winner’s The Sentinel is just such a movie. I was watching Jurassic Park: Lost Word with my oldest son a few nights back and reacted to what a pale, unanimated and completely dead performance Jeff Goldblum gave in that movie. I decided to check out one of his older flicks as I think he’s brilliant in early stuff like Philip Kaufman’s Invasion of the Body Snatchers 1978, and Cronenberg’s The Fly 1986 (obviously not forgetting his very early small part in Winner’s Death Wish 1974). The Sentinel boasts Goldblum and Christopher Walken as the main names on the DVD cover art so that became the logic choice for the night… but those two guys, despite giving decent performances, are only seen in small supporting parts and instead The Sentinel turned out to be a real gem of modern horror story which really surprised me and undoubtedly has become one of my new favourite genre flicks.

Photo model Alison Parker [Cristina Raines] expresses a desire to live in an own apartment instead of moving in with lawyer boyfriend Michael Lerman [Chris Sarandon]. He’s not too happy about her decision, but following her father’s death he goes along with the split living arrangements. Alison’s neighbours turn out to be a real collection of eccentrics where Mr. Chazen [Burgess Meredith] throws a party for his cat Jezebel something dark is awoken in her. She has terrifying nightmares, which break into reality when the swinging chandelier and creaking floorboards from upstairs keeps her from sleeping. Slowly she starts to believe that she’s loosing her mind and perhaps that is the case when none of the strange neighbours she’s been interacting with for the past days actually live in the house… the only two who live there are Alison and a reclusive priest who’s sole purpose in life is to guard the gates of hell.


Michael Winner! What a brilliant writer and director he is. Not only did he direct one of the most badass vigilante revenge flicks of all time Death Wish, but he also directed this fantastic little horror flick. It has a great cast, and a ridiculous amount of actors that at one time had been major names such as: Ava Gardner, Burgess Meredith, Eli Wallach, José Ferrer, Arthur Kennedy, Martin Balsam, and the legendary John Carradine to name a few. Then there’s a bunch of actors who where just on the brink of breaking though such as Jeff Goldblum, Christopher Walken, Beverly D’Angelo, Jerry Orbach, Tom Berenger, and supposedly Richard Dreyfus has a cameo in an outdoor scene. It’s a movie that would make for a great drinking game, just pop a shot each time you see a familiar face.

As all great horror flicks that dabble with Satan, possession, gateways to hell etc., you have to have religion in there as an opponent or accomplice – Check out Manuel Carballo’s Exorcismus 2010 for a great use of how religion can be used as an accomplice to the evil that unfolds. That’s a twist I haven’t seen to many times.

What really stands out is that The Sentinel is a top-notch pulpy horror flick, which plays by all the right rules. It’s really no different than that one they all are judged by, William Friedkin’s The Exorcist 1973.

The flick starts with an initial attack. Not a classic one with a monster, but a “disturbance in the force” if you will and Monsignor Franchino [Arthur Kennedy – who get’s a lot more to do here than he did in Alberto DeMartino’s L’Antichristo (The Antichrist) 1974.] is sent out into the ordinary world. This is where the opening montage shows us several different clips of Alison and Michael. At her work as a model, and also where Jeff Goldblum is seen as her photographer, as they take romantic walks together, as they look through her portfolio, as they look for flats, she for her own, he for a one to share with her…this establishes the ordinary world which they live in. The world about to be disrupted.

Then the shift in balance, all told in a majestic way in which you rarely see exposition be delivered today. This happy go lucky woman who appears to have everything proves to have a dark secret. When returning to her childhood home after her father has passed away, she has a flashback of a traumatizing moment in her youth. When she walks in on her father being unfaithful with two different women, Alison runs to the bathroom and slits her wrists in an attempt to take her life…

That suicide, and others referred to though out the narrative, are all part of the key to the movie. This is like Exorcist, all about loss of faith, and what happens on the way back to finding it. Suicide is as you know the ultimate sin in the eyes of the church, and guilt can drive people to anything. Nothing is as powerful or useful in a horror flick of this kind as Catholic Guilt. This is what Monsignor Franchino latches onto when he meets a terrified Allison suffering from posttraumatic nightmares and an imagined death! Yes there’s a stunningly effective sequence right before midpoint where Alison’s nightmares see her killing a spectre – or was it a spectre, did she in fact kill someone? The guilt of that act, her adultery – again backstory exposition delivered brilliantly – and her many suicide attempts drive her right back into the arms of the church… which is exactly what Monsignor Franchino plan, and mission from that opening sequence has been all about. Monsignor Franchino even says it to Alison clearly in dialogue just before the third act starts that she’s lost her way and the guilt that breeds suspicions and deceptions will vanish when she makes peace and embraces Christ… It will make perfect sense once you see this magnificent movie.

The supernatural plot takes something of a second seat to the investigation plot, or perhaps I should call it an investigation Sub-plot where detective Detective Gatz [Eli Wallach] and Rizzo [Christopher Walken] go after Lerman with the suspicion that he might be behind Alison’s state. Its though this investigation subplot that’s brilliantly used to lay out exposition, as every time the detectives are on screen, they tell us of something of importance, either to clearly or to dig into someone’s’ backstory and that helps explains certain parts of the narrative.

And you never make a movie like this without filling the piece with religious metaphors, sinister twists and red herrings. The theory I had in mind was way off and surprisingly I fell for the oldest trick in the book when Winner started laying out false leads for me to pick up.

The last fifteen minutes when all is revealed and the sub-plots come to culmination are outstanding. The visions of hell are outstanding and a true delight of outlandish cinema. Winner used actual disfigured people in these scenes, which led to both him and the production receiving some harsh critique. But it was the right way to go, because the real freaks add an authenticity to the piece, and together with the climactic special effects – created by the legendary Dick Smith, who also created Regan’s transformation make-up in that other movie, and Albert Whitlock’s visual effects – come together for an unforgettable climax to an unforgettable movie that I’m ecstatic to have seen.

Produced, directed, screenplay written (based on Jeffrey Konvitz’s novel) and edited by Winner himself, The Sentinel is a movie you want to seek out right away if you like good old school horror with brilliant twists and an atmosphere that is right up there with the cream of the crop.

Good review! I have not heard of this film but I shall be seeking it out thanks to you!

Thanks Mick!
I hope you enjoy it!

I have been watching this movie for years. Believe it or, for twomonths in the summer of 1974 i actually lived in the middle of this very same block long connection of buildings that that most of this movie takes place in, so i feel a connection to it physically. Funny trivia i laughed at again last night in the movie is when Alison is in the phone booth on the "Promenade" scenic walkway talking to her boyfriend and says her friend, who is standing next to her, will give her a ride home, that ride would be about 50 feet. Its so funny because they show that the promenade ends right there often at her house whenever they show the facade of the entrance door area of the house she lives in, the area where you look up and see the priest. What an awesome film. So many huge stars. A real treasure.

I saw this film years ago felt it was truly scary & creepy. Want to pick up the DVD but can't find it anywhere. Anybody got ideas as to where I can find it?

Dude. Check either Play.com in the UK or Amazon in the US... it's there.
You may have to pick up a used one, but it's there.