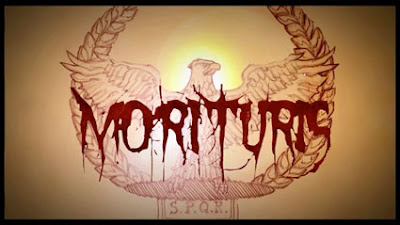 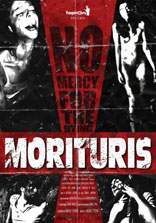 At first I went “Oh bugger, don't tell me this is gonna be another found footage flick...” as the grainy super8 footage rolled over the screen. That’s until the chubby Uncle, whistling Grieg’s In the Hall of the Mountain King, takes little Martha into a secluded part of the forest, that is. But before he can lay his grubby paedophile hands on Little Martha, someone just off screen, dressed in a gladiator outfit slams his weapon into the sinister uncle, killing him, then Martha, then her mom, then her dad, then her brother… It’s suggestive and done in a rapid “found footage montage” style before the credits start rolling. The credits show images of roman gladiators fighting each other, but the longer the credits roll, the more grotesque the animated intro becomes. The credits tell the story of a band of rouge gladiators who roam the lands, raping women, murdering children and doing what ever the fuck they wanted until justice caught up with them. The entire five – ten minute segment played so far, is all something of a initial attack that will set the first half of the movie on a wild goose chase. But be patient, it will all fall into place later on. 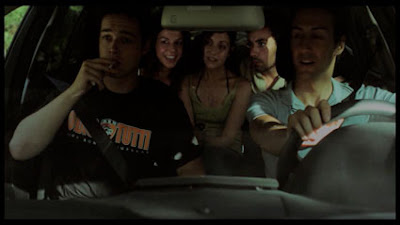 Post credits and we are introduced to a bunch of kids driving down a dark off beat road. It’s obviously the new flesh and convention leads us to predict where this is going to go: Bunch of kids in the woods, the Gladiator geezer hunts them down one by one until there’s nobody left… BRAAAAAAP! Wrong! It’s an elaborate red herring that the initial attack has set up as the movie will first venture into some seriously dark territory before taking a sharp left turn into a new area, but more on that later. 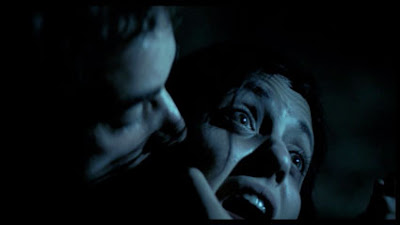 The night before the bunch of lads picked up the two touristing women, who they now have sat in the back of their car. There’s some cheesy and ironic dialogue along the lines of “You guys are not like other Italian guys who only pick up tourists for sex. “ The destination is way deep into the woods, with the intention of going to a bad-ass rave, so booze and drugs are soon part of the picture. So far Morituris plays by the book as characters are established, some more empathic than others, and we get a pretty good idea of who’s who within the constellation. Viewers paying attention will see beyond the surface, and notice that something is of kilter, such as them being on their way to a rave, but listening to Charles Manson on the stereo. When the second act shifts into sadistic violent rape and torture, we are somewhat distraught due to the wrong impressions we have been given and the tremendous force of the assaults committed against he two women. Oh, and then there’s Jacques, still back in the city committing even viler acts against the prostitute he’s brought home. The text message correspondence between the two parties tells us that they have done this before, and in some fucked up way, it’s all a game of seeing whom can be the most eviler of the two camps. Warn the feminists; misogyny is back on the menu! 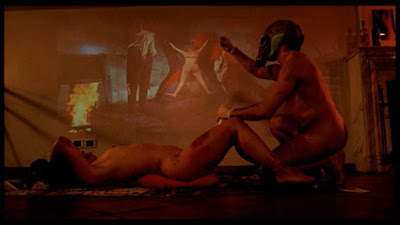 Once again it’s in place to quote author Jack Ketchum, “If I didn’t offend someone, then I wouldn’t be doing my job!” In my opinion this is one of the most important sentences ever said about the horror genre. Even in the vilest subgenres there’s sadly a repetition of tricks and gimmicks that unfortunately make them become convention. We need renewal, new approaches, fresh insanity and definitely original depravity thrown our way in our genre fare. If your movie fails to offend, then it, and you as a filmmaker are not doing your job. Morituris pushes limits and possibly goes to far in its random depravity – but that’s a good thing. Whichever way you look at it, Morituris is an intriguing movie, due to a sudden shift in genre. Justice is served, but in a way you never through possible until the big reveal of the third act. 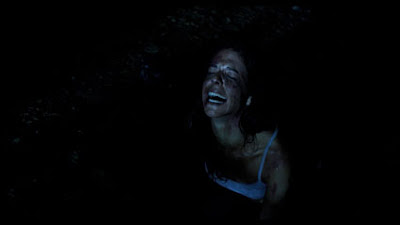 The last ten years have seen a horror films take on a more profound nihilism than the movies that laid the foundation for European exploitation, horror and sleaze. Morituris is a stern slap in the face as it, as mentioned earlier, suddenly warps into a completely different genre. Where there was a chance that the ferocious rapes could have been avenged by anyone of the girls, Morituris stirs things up as it abruptly reveals the Gladiators from the opening segment to be zombies roaming the woodlands!  Mixing a Sadistic rape with zombies is a novelty I’ve not seen since Joe D’Amato dabbled in Zombies and Sex back in the late seventies. Dust off your chest plate, it’s killin’ time. 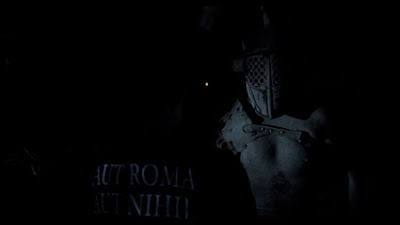 No Italian horror is worth its name without the over the top special effects we have grown accustomed to through the years. Morituris sports some great bloody moments courtesy of Maestro Sergio Stivaletti who delivers the goods in some splendid ways. Crucifixion, decapitation, impalement and on and on, the gooey moments are grand. I’m fascinated by the reactions it evokes in me. The gut cringing violence against the women serves as an antithesis of the mental, “give it to them”, chant the violence against the male counterparts generates. Although I do find the cruelty towards the men to be nothing compared to the acts performed against the women. I’d easily have seen them suffer more than what they did. Merciless rapists get off way to easy in horror these days. 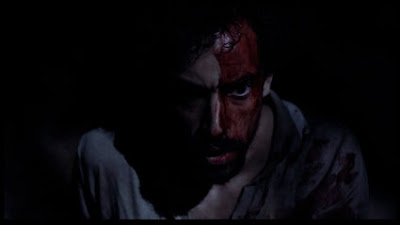 So summing it up, getting something completely different from what I expected Morituris turns out to the most captivating movie to come out of Italy in a long time. The movie looks great, Daniele Poli’s cinematography with the RED is fantastic and brings the dark toned images of living legend Daniel Pearl to mind, and what is a movie without a great soundtrack. Mortiuris is an eclectic mix of Manson-ish acoustic guitar, brooding industrial sounds, guttural Death Metal and a brilliant medieval times tunes that evoke contemporary stuff such as Game of Thrones and Rome. 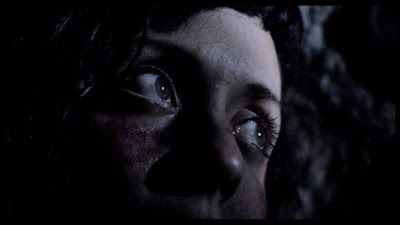 Morituris taps into everything I used to love about the gore, horror and sleaze of Old-school Italian genre. Violent sexploitation, Gothic horror and old school survival horror is summed up here, but with modern approach. Goddamn, this may well be one of the most provocative movies to come out of Italy in the last twenty years, and definitely a delightful step towards the magic of Italian horror of yesteryears! It would undeniably have put a smile on Lucio Fulci’s face!

Keep your eyes open for this one. In it’s own perverted way, it’s something really special, If Raffaele Picchio’s debut feature takes it’s audience on an grotesquely captivating rollercoaster of emotions like this, I can’t wait to see where he takes us next time. 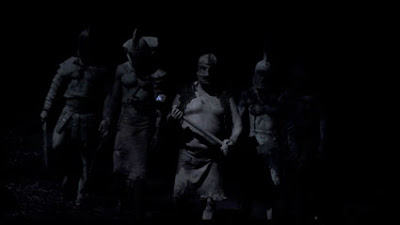 I have to see this! Cheers Jason!