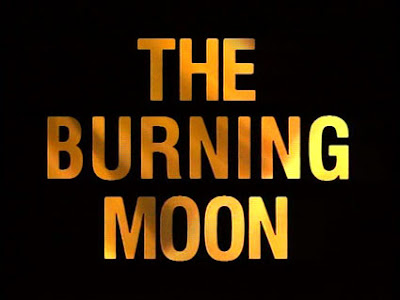 Lager lout Peter [Ittenbach himself] is forced to stay at home and baby sit his little sister [Annette Arbeter] instead of roaming the streets smoking dope and getting in gang fights. But in a moment of self-destructive behaviour intent on “punishing” his parents, Peter shoots up some drugs and watches as the moon starts to burn. Then he stumbles into his sister’s room where he starts to tell her two bedtime stories… bedtime stories that focus on death, mutilation, a serial killer, a psychopathic priest and the bowels of Hell! 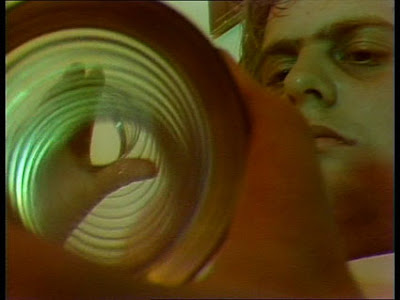 Movies shot on video in the early nineties have a certain look to them that reminds me of the movies my mates and I where making in the early nineties. Plot was always secondary to the effects. It was all about the effects, the violence, and the cheap gory special effects the entire production circled around. Well, that’s exactly what Olaf Ittenbach’s early movies are all about. Shallow stories primarily designed to showcase his moments of gore and splatter. The Burning Moon has some delightfully classic old school effects, body parts chopped off, dismemberments, headshots, throat slits and human torment effects which still today are impressive. Fuck you CGI, you can never mimic reality as well as enthusiasm, latex and fake blood. 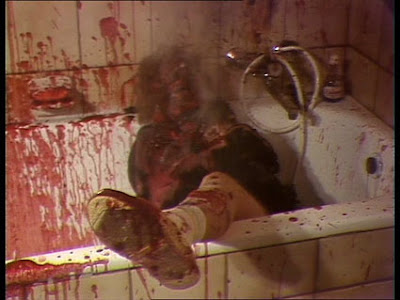 Homemade effects are fun. Naïve and enthusiastic and way to exaggerated, watching low budget flicks with cgi’ed blood and splatter isn’t the same thing. Ittenbach was at an early stage in his career here, but it’s already very clear where he’s going to go with his fantastic effects. These early movies are merely appetizers for the gore fests to come, and for each film his skills improved. That not saying that these effects don’t get the job done, the last ten minutes are one goddamned insane gorefest that pus a lot of others to shame, and Ittenbach’s past as a dental technician comes in handy when one devastating scene in graphic detail shows a drill splintering it’s way through teeth, sending pieces flying in all over the place. 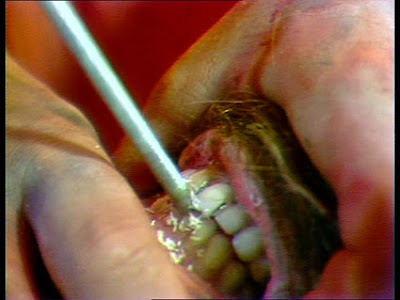 Anthology films are coming into craze again, what with Little Deaths, The ABC’s of Death, The Profane Exhibition and on and on and on… So making your own way back in 92 is a pretty ballsy thing to do in my book. Especially as it’s your second real movie you ever made! Both films have childhood traumas as origin stories to both killers’ rampages. Which is interesting as I find a lot of German filmmakers look to the past scars for inspiration, despite genre they are working in. It’ kind of hangs to together with the melancholic angst of early Wim Wenders, Werner Herzog, Rainer Werner Fassbinder. History comes back to haunt you. 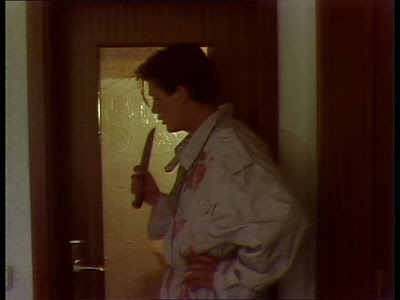 There’s a fun moment when a victim to be is watching TV and Ittenbach’s previous, and first film Black Past 1989 is on the television. The victim to be, switches channel and says that nothing but shit on the tube. Julia [Beate Neumeyer] hides from her psychopath boyfriend behind a bathroom door, which Chris [Helmut Neumeyer] blatantly points out to her is a glass door. Another scene shows a cutaway of a blood splat over a leather-studded codpiece.  In the movies wraparound that odd German humour and dark nihilism I’ve earlier claimed to be a trait, radiates from Ittenbach’s The Burning Moon. Check out the Necronos: Tower of Doom piece for more on those traits. 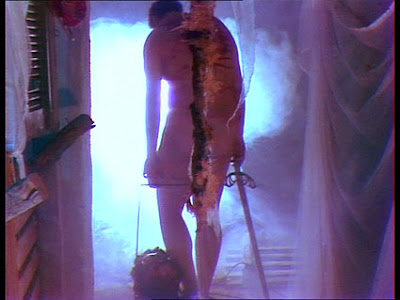 I’m giving The Burning Moon a 4 out of 6 because I was in the mood for some old-school gore, and Olaf Ittenbach’s movie delivered it. He also managed to work a Jesus zombie in there too, and seen as I love depictions of hell, the vivid depictions that Ittenbach pus on screen in the last ten minutes are outlandish, and grotesquely intimidating in such a way that they would have made Lucio Fulci proud.