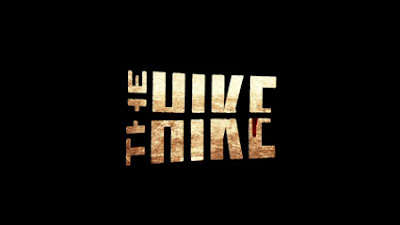 Spice Girls in Hell! Yeah, that’s the best description I can give you of The Hike. I dunno, but I just didn’t get into this flick at all, and it all felt like Spice Girls in Hell. A bunch of Sappy chicks go into the woods for a weekend hike, prove themselves to be complete stereotypes and fall victim of a band of geezers out for a weekend of mayhem. 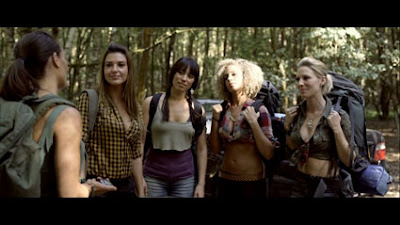 Wham Bam. The Hike goes right in for the kill with it’s effective initial attack. An off-screen predator slaughters a bunch of unknown youths, we don’t really give a fuck, but it set’s the tone of the movie and establishes the killer in the woods… and because he stripped that last girl before tying her spread eagle to trees and roots in the forest floor, we know that he’s a pervy sadist too… but that’s about as good as it gets. 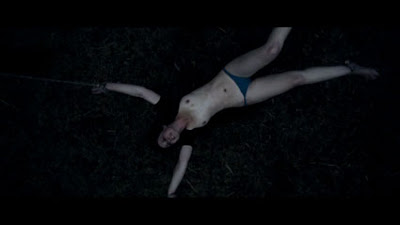 Quick titles and then a presentation of the gang of girls set on an adventurous weekend in the woods. Character traits are indicated and Kate’s [Zara Phythian] “the secret” is hinted. Their most successful friend, photo model Tori [Barbara Nedljakova], and her obnoxious boyfriend arrive on the scene in the last moment and makes an entrance to capture everyone’s attention. But Dean [Tamer Hassan], Tori’s huge rough boyfriend starts pushing Tori around, Kate steps in and takes him down – another reference to her time in the army. 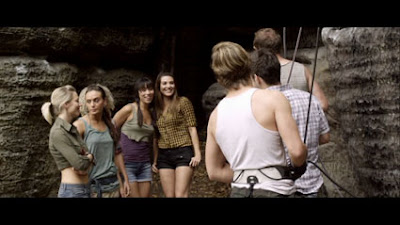 So these tough Grrrls, fully capable of taking care of themselves get deep into the woods and bump into a bunch of typical adrenaline junkies. You know the kind and you probably hate them just as much as I do. Buffed, fit bastard urban adventurers, and the girls turn into moist crotched giggle buns, fully intent on getting it off with the boys. Or at least being cock teases. Surprise, surfukingprise when the lads turn out to be sadistic sex predators on their annual, let’s go rock climbing and rape-murder any unfortunate women that come along… Yes predicable as hell and the only person who you know will make it through is Kate, because she’s been in the army and it’s pointed out so blatantly over and over again that you know her repent rage, sadness and frustration over her deal boy friend is going to come back and motivate her to take revenge when push comes to shove. 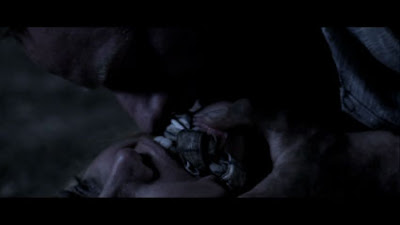 There’s some really annoying and stupid dialogue at times, like when they talk about not having cell phone coverage, - what moron writes dialogue like that 2012? Break shit, loose shit, fucking run out of batteries, but don’t DON’T write no coverage dialogue. Oh I almost forgot the ridiculous dialogue where one girl freaks out over the “rest room” being out in the woods, Öh what part of Hike didn’t you get… Ok I can take that the photo model is supposed to be some sort of comic relief, but it’s still annoying. 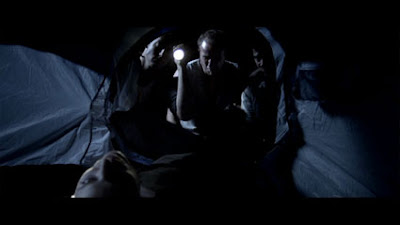 The salvation of the movie is to be found in Kate. As said, the backstory of Kate is referenced several times, before she finally tells the girls what happened on that occasion they have been avoiding to talk about when she’s around. Sat round their camp she tells them how her partner was killed in action whilst they served time in the army together. And what better time to attack the girls! When Kate has opened up and exposed her vulnerability we empathize with her, and an attack at this point in time only helps create empathy for the characters. It almost works, and where you perhaps root for Kate to make it through and get the vengeance she’s entitled to, you just want the rest of the girls’’ dead. 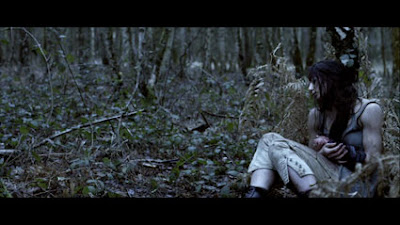 The Hike get’s a two out of six. It was a clear disappointment although it had a promising set up and a decent idea going. Unfortunately it is devoured by convention, predictability and really shitty dialogue. In a nutshell it’s a cheap Rape-revenge knock off of Neil Marshall’s The Descent with a paper thin plot, shallow characters and crap dialogue – YOU DO NOT WRITE SCENES WHERE CELL COVERAGE CONVENIENTLY RUNS OUT AT A BAD TIME AND HAVE CHARACTERS TALK ABOUT THIS IN DIALOUGE. YOU DON’T!

Thanks Bro!
Glad you liked it!