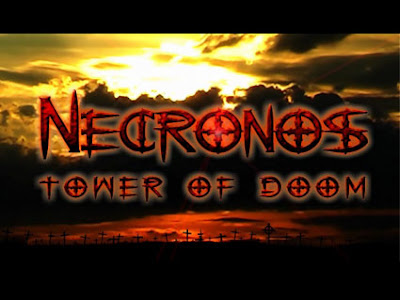 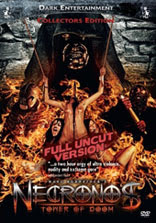 Necronos: Tower of Doom
Directed by: Marc Rohnstock
Germany, 2010
127, Horror/Splatter
Distributed by: Dark Entertainment
Way back in the day… no, I mean really way back in the day, almost twenty years ago when I worked in video stores… no, not the cool chic one with Bergman and Fellini on the shelves, but the underground one, that imported uncut Greek and Dutch tapes… and the dodgy titles from Deutchland, I got my first intoxicating shot of cheap, gritty German splatter.
Hard To Get Videos of Hamburg was a kick-ass store and one of the guys who ran that strore was Steve Aquilina, actor, cinematographer and editor of Andreas Schnaas Violent Shit trilogy 1989-1999 and Zombie ’90: Extreme Pestilence 1991. We imported and traded a shit lot of tapes with those guys, so this obviously meant that the movies they made on their spare time where required viewing, and god knows we certainly sold our share of Carl the Butcher’s exploits! 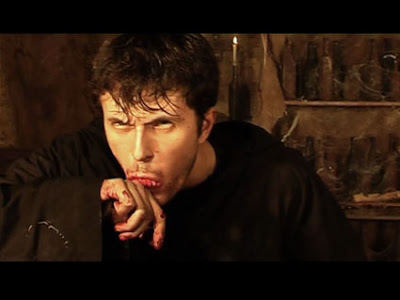 A lot of blood has flown under the bridge since then, and a whole new generation of blutrünstiges gore Dämonen have been keeping the German colours dark red with the guts of unfortunate victims… and I find my self returning to it every now and again, because there is something special about cheap German gore that will always appeal to me in some dark fold of my heart. From the first time I saw Jörg Buttgereit’s Nekromantik movies, through the works of Schnaas, via the carnage of Olaf Ittenback and Marcel Walz, up to the likes of Maik Ude (oh, yeah, I’ve got his Abnormis on my shelf awaiting a viewing) and Marc Rohnstock. 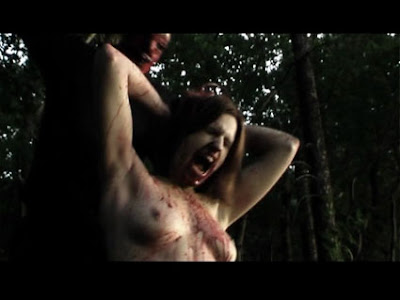 Many centuries ago, the dark wizard Necronos [Thomas Sender], a powerful minion of Satan, finds himself defeated by the villagers. After raiding his castle they butcher him and rest assure that the torment and fear he brought with him was abolished forever… until several decades later when rises from the dead and swears to take his vengeance on mankind. Together with his servants Goran [Timo Fuchs] and The Witch [Manoush who also starred in Marcel Walz La petite mort 2009, also available completely uncut from Dark Entertainment.], the people of the small German village are once again being kidnapped, tortured and maimed just for the hell of it. Well they are actually being obtained and maimed as Necronos seeks out the rare ingredients he needs to create his army of Berserkers and lay the land to waste. 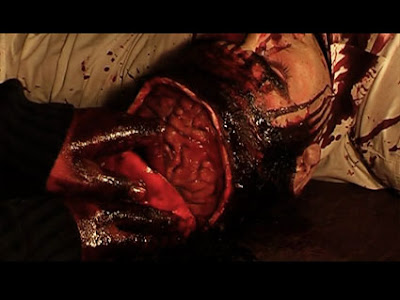 After a nine and a half minutes of explanatory exposition, set in medieval times – not only presenting the back story of Necronos the Wizard, but also showcasing shaved naked German chicks, a small zombie army, gruesome effects like eye gouging, a couple of decapitations, dismemberment and burnings, all impressively shot in minimalistic, but period establishing locations – Necronos brings us up to modern age with a threat of the great wizards return and revenge on mankind… and at this point I really fucking want it! 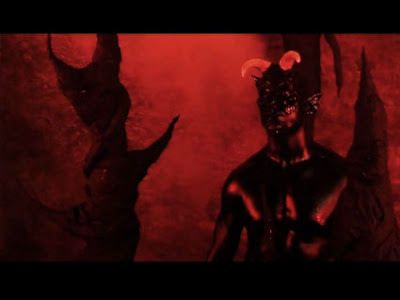 The modern age “Jason-ish burn victim stalker demon”, Goran if you are playing attention, is really effective. His mayhem set’s a tone that propels the film into darkness. Yeah, I’ve seen a lot of shitty low budget movies in my day, but there’s something with the first half hour of Necronos, which takes me back to those days of Nekromantik, and especially the first Violent Shit films. Films, which are grotesque and provocative in a naïve and violent way, but still have a dark comedic tone to them. But as said, Goran isn’t merely genre convention, he’s one of Necronos foul puppets, sent to do his evil deeds… and he’s got plenty of vile feats hidden away up his sleeve. 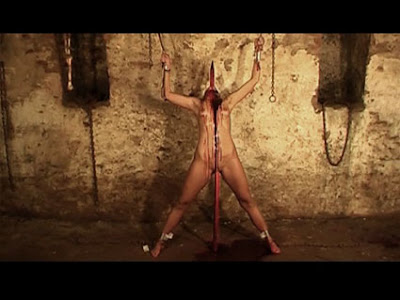 It’s classic splatter and gore that just keeps going on and on and on… There’s a great double beheading, and the birth of the Berserker really stands out. It’s an easy but impressive moment. I find myself chuckling at numerous moments of depravity and bedlam, in-jokes, such as Carl the Butcher’s mask hanging on the castle wall, or the faces of other German splatter directors cameos [Andreas Schnaas, Timo Rose, Marcel Walz] but mostly the profound violence of the murders. And yes, Luna B’s impalement scene is just as gag inducing as you imagined it to be when you first saw that image! It’s more or less showing everything you never saw before that iconic Cannibal Holocaust image - and now an image associated with Necronos after that Facebook scandal forcing Dark Entertainment to remove the original poster image from their wall! 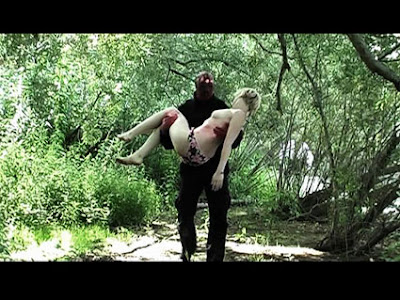 Interestingly enough, and perhaps this is a German splatter trait, there’s really nobody to root for. Necronos is just like many other German genre flicks a tour de force of violent deaths and continuous carnage. It would be fair to say that the only character that we have to feel anything for is… Necronos… Yeah the Wizard! He’s the only one with anything to gain in the movie, the only one with an assigned task – collect the souls, prepare the apocalypse, bring death to all. But then Rohnstock hurls us a fast one. A delightful curve ball in the shape of Lucy [Tanja Karius who also had a victim part in La petite mort, which also saw director Marc Rohnstock in a small part!] In his scheming, Necronos needs to find the “Chosen one”, the one with impure flesh, in other words a virgin, as all the previous women The Witch has led him towards have all been whores! Necronos words not mine. Although the Lucy character and her subplot boyfriend, are red herring’s and the focus soon shifts from Lucy to Michelle [Saskia Neumueller]. Blam, at last there’s something to root for in this movie – not that that’s a bad thing. Michelle is aided by previously captured, but now escapee David [Mario Zimmerschitt]… and finally there’s a value at stake. The future of mankind lies in the hands of David and Michelle! This may be unconscious or deliberate by Rohnstock and company, but throwing the audience a bone this late in – as a good part of three quarters have played out – is menacing, and malicious as it sets us up the punch of the gloomy ending which is about to come! 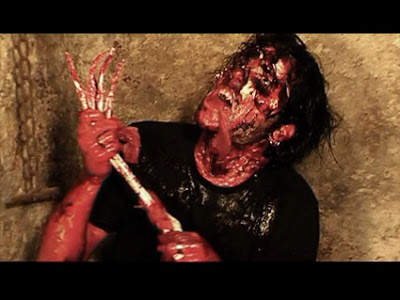 Just like the films of Buttgereit and Schnaas, the movie does have a few quirky laughs stowed away in its narrative… I’m no gourmet of German comedy, but it’s there and I suppose it gets the job done. Perhaps it’s this German humour that plays its most important part in the scenes between Necronos, Goran, the Witch and the Devil… It’s stiff and every scene ends with Necronos turning his back against the camera and returning to his sinister plan. After a while it becomes comedic. But I’ll write it up as a second trait that defines their niche, and perhaps the German indie splatter scene is the one that is closest to the original Sam Rami Evil Dead flicks. Movies that where terrifying, filled with violence but at the same time fun… although with the main detail being that despite the fun, they never once let us catch out breath, and they where dark as hell. There’s no happy ending in the Evil Dead movies, nor is there happy endings in German splatter. 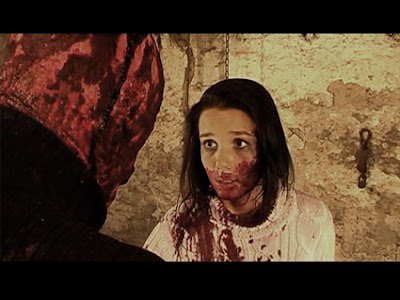 What impresses me the most is the familiar German nihilism mentioned above… Just like the films of his counterparts, Marc Rohnstock’s Necronos takes no prisoners. It get’s in there, stirs the shit, drowns it’s audience in tsunamis of blood, lures them in, presents false hope and then finally kicks the viewer in the balls with it’s dark depressing, but humoristic ending… an ending I find to be very typical German Splatter. 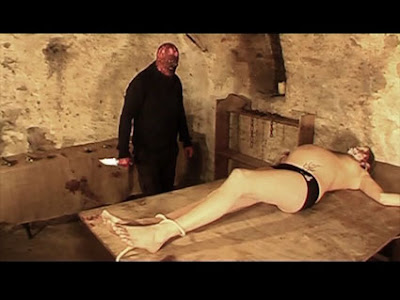 Just for the record, if your girlfriend is preggers then please don’t show her Necronos… after all, what Goran does to the expecting woman and unborn child in this movie will leave you both scarred forever! We don’t want that now, do we? Because Necronos is a gore drenched orgy of depravity and viciousness that requires your attention… a two hour epic, which never looses pace or feels slow, but instead oozes of the joy, enthusiasm and passion for filmmaking that Marc Rohnstock, his crew and cast have brought to their movie. Sometimes a big goofy gore movie is just a big goofy gore movie and you need to sit your ass down and simply enjoy the ride! I did, and I loved every minute of it! 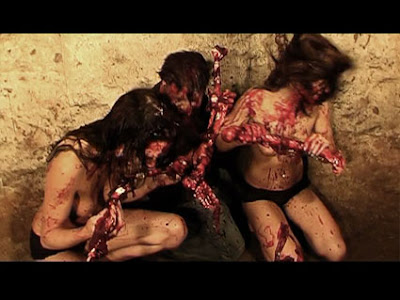 Necronos is available HERE, from the brave and majestic warriors of Dark Entertainment. It’s totally uncut, looks fucking awesome, and for your viewing pleasure the disc even sports English subtitle track! 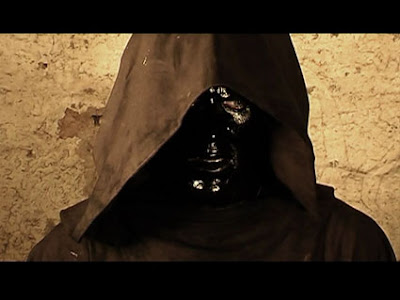 (Oh, and if you are a true collector, you need to pick up all their titles to get the secret message that the spines will eventually spell out!)
Here's a censored trailer, get the real deal here.
- April 09, 2012

I love Zombie'90, used to watch it a lot back in high school and made my mates watch it, too. Was really inspiring to see those guys try and have a go at epic splatter horror with home-made effects.

You should check it out guys, I love what a little cash and a lot of passion can do for a movie... walking that razors edge is goddamned tricky. This one kinda pulls it off.