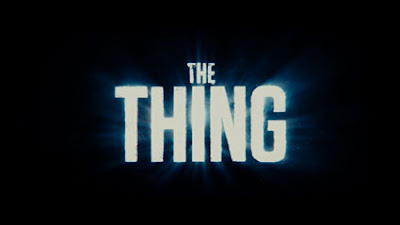 A Norwegian research team has found something up in the ice of Antarctic. Young palaeontologist Ramona Flowers… no wait, Kate Lloyd [Mary Elizabeth Winstead] is given the opportunity of her lifetime, to tag along and perhaps discover something that will change mankind for the rest of time. After revealing the spacecraft that supposedly crashed into the glacier several hundred thousand years ago, they find a creature trapped in the ice. It becomes Kate’s task to excavate the being, but shortly after the block of ice captivating the monster is placed in the Norwegian camp, it breaks free and now the people at the research centre are it’s prey… but you know that don’t you. Because if you got this far, then I know that you are a fan of the original just as much as I am. 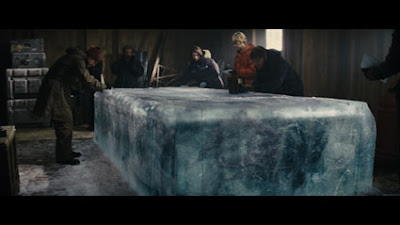 Well, why is the question. Why does Hollywood insist on remaking classics? There’ must be enough fresh idea’s out there. There must be enough budding screenwriting talent out there that isn’t getting the shots they deserve. There must be other areas one can dig into other that the movies that once upon a time defined the horror genre. Now I’m not going to go on a rant about remakes here, because I actually do like some of them. Although they still look like crap compared to the originals, and perhaps it’s even worse when the new version puts the original to shame. Never the less, this is The Thing remake, or prequel as it turns out… oh, now that can’t really have been missed by anyone who really wanted to see this movie… If you go into seeing this film without knowledge of the original then I guess I’m older than you and you still have some great shit to discover along the way. 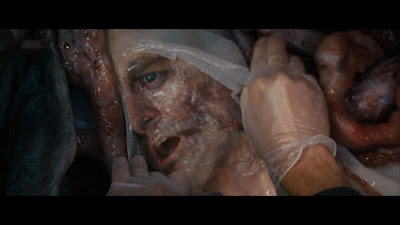 I read somewhere that someone thought that the link to the old film at the end was brilliant… well it is, but at the same time, there’s at least ten different links to the original movie woven into the texture of the movie throughout the entire film. SO perhaps you should have seen the original before listening to people talking about this one outside the theatre! 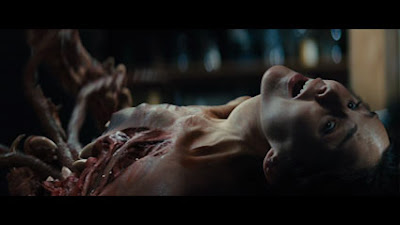 Although I did enjoy the nihilism that came with this flick, I loved going into it knowing that not a single person will come out alive. There’s almost a perverted buzz going on as I sat back and waited to see how they off this bunch this time around… and in all honesty I think they failed.  Yeah, I love the darkness, but the monsters are revealed way to early, and they’re way to visual. Half the magic of the original is the paranoia. Something I never really feel creeping over me the same way that it did in the Carpenter version. Heck, if you break it down, this one is more or less a scene for scene remake of Carpenters version, sluggishly following the beats and twists of that gem, so how come they missed that vital beat I’ll never know. But then again, it get’s the job done and with knowledge of the original, I feel that it’s still quite fun to watch. Although I have a major problem with the ending! Not the link to the original, but the way they just leave Kate out there in the cold with nothing but the threat of a possible sequel looming… Yeah, I could just see them scripting some fucked up sequel where Kate manages to make it to the US camp, hook up with MacReady [Kurt Russell] and Childs [Keith David] and go yet another round with the beast. It’s the only loose end (or one of the few) between the two movies and in all honestly I feel that it’s just a screenwriter thing, it’s just their love for their character that led them to leaving us with the sloppy ending. Because it’s been done before in the original, but there was a threat, a possibility that Macready or Childs may have been the alien… here’ there’s nothing. I would still have been better to have gone to crack of dawn, Kate’s dead frozen body in the snow buggy, then have the familiar Norwegian helicopter swoosh by on it’s way to Lars and the camp to tie the sack together. 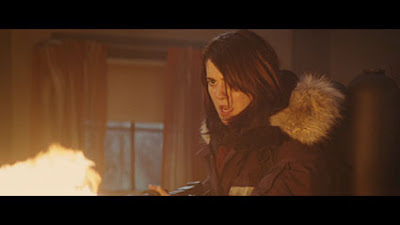 A big bonus for The Thing 2011, is that pretty boy Eric Christian Olsen is of no use at all through out the movie and dies a terrible, but deserving death. I was scared to hell that he’d be the “heroic” counterpart to Mary Elizabeth Winsted, but instead we get Joel Egerton who get’s the job done. 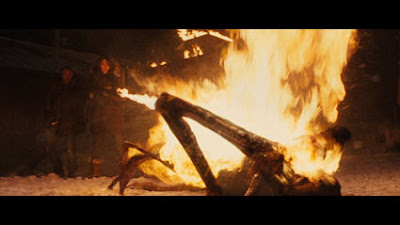 The Thing get’s 4/6 for effort, because like the alien, this movie has mimicked the close to perfection. I’m pretty certain that you could take a couple of splices from The Thing 2011 and insert them into The Thing 1982 and they’d play seamless. So hat’s off to set decorator Odetta Stoddard, art director Patrick Banister, and production designer Sean Haworth. I can appreciate the love and respect for the original being woven into this prequel, and I really dig the details, like the Norwegians speaking Norwegian, the fine threads that connect this to the original – again, it in a lot smarter way than the ending which coincidentally lifts two shots out of the original to make them flow together even better. 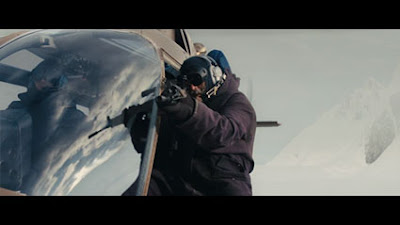 But I hate when remakes posing as prequels have much more advanced monsters! Where the monster in the original – and let’s not fuck around here, the monster in Carpenter’s original is the star, Russell plays second fiddle to that imaginative beast that Rob Bottin created – was a imaginative weird thing that I’d never seen before. It freaked me the fuck out, and the monster here, although impressive as it is combining old school prosthetics, green screen and CGI, the error in my opinion is that they never really keep it the fuck off screen… instead it’s more of a showcase for showing off cool effects, yeah they are cool, but the more you show of the monster, the more it feels as if I’m playing a videogame! That’s exactly where The Thing fails in my book, keep the monster in the dark and build towards a really freaky reveal that I will take with me after the film is over… something that jiggles my imagination with the necessary what the hell was that questions, not a Oh, so that’s what it looks like…  Nightmares are made of the things lurking in the dark, not the pathetically lame computer generated monsters… Now I know I’ve been harassing CGI a lot lately, but do it right and it looks awesome, and that I’m fine with, but if I can see that it looks crap, why don’t the studios?