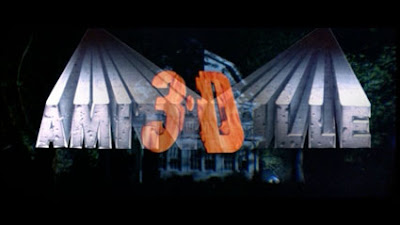 One of the few movies I’ve ever turned off because it got to me in all the right ways, is the original Amityville Horror from 1979. My wife and I tried to watch it way back when we started hanging out in the nineties, and we just couldn’t make it through. It was way to scary and it ended up being turned off and put back on the shelf. I’d seen the movie several times before along the years, I’d even read Jay Anson’s novel which still to this day has a fixed spot on my bookshelf amongst the other horror and pulp books. It’s still the movie my wife rates all others we watch against. So, when Amityville Horror 3D turned up in my mail the other night, a stiring urge to watch it grew inside me, as I recalled seeing the trailer, probably in the theatre I used to help out at when growing up, or on one of the many trailer tapes watched back in the advent of VCR. Anyway I recall it hitting all the right marks and freaking the hell out of me - I was thirteen and still had a lot of really cool shit to discover. And keep in mind that there once was a time when a single image from a movie could give you the chills, that goddamned Lutz house is an icon of fright if there ever was one... 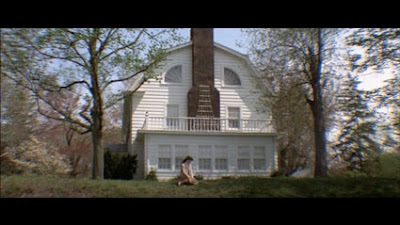 Ghostbusting couple John Baxter [Tony Roberts] and Melanie [Candy Clark] expose a band of charlatan mediums working out of the old Lutz house. Whilst following up their story with some photographs in the basement, real estate agent Sanders [John Harkins] turns up and presents John a great "on the spot" bargain: buy the house for almost nothing. Being mid-divorce from Nancy [Tess Harper], John jumps at the opportunity, as do the set-up’s. Photographs show deaths to come, demonic faces, swarms of flies gag the uninvited, floorboards creak, holes in the basement groan, winds blow, stinks stink, and teenage daughters complain about things way out of their league, before whipping out the old ouija board. 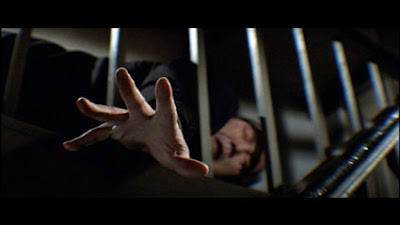 When it all comes around, Amityville Horror 3D holds nothing against the original and it really is a truly generic movie that tries its hardest to be unique. Unfortunately it just can’t stay away from following in the footsteps of paths and tricks earlier treaded by Stuart Rosenberg and Damiano Damiani – not forgetting the very Omen II-ish elevator sequence, and an old Indian burial ground - in earlier films. Now perhaps this is due to the fact that parts one and two, are based upon “real events”, and this third installation, is all make-believe. Because producer Dino De Laurentiis was being sued buy the Lutz’s weren’t part of the second sequel, hence the make up story by William Wales, who seems to have never written anything else for films either before or since. But that doesn’t stop Meg Ryan, in her second role ever, and Lori Loughlin - who will be forever associated with her character Becky, John Stamos girlyfriend in the god-awful, never-ending, Olsen twin goo, Full House - as the Baxter's daughter Susan, referencing the earlier events and movies that took place in "that" house. 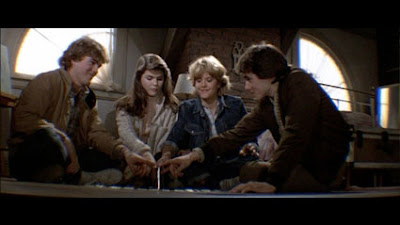 Nevertheless Amityville Horror 3D, tries it’s best to be and entertaining little flick that get’s the job done. It builds up the tension – or at least tries, as we already know everything there is to know about the house and the “entity” living there. Just as I enjoy movies that poke my mind and make me look over my shoulder an extra time, I enjoy movies that demand nothing from me. I can just chill the heck out, be entertained and fall in and out of sleep if I wish, despite a really cool John Caglione Jr. burn victim effect around midpoint. 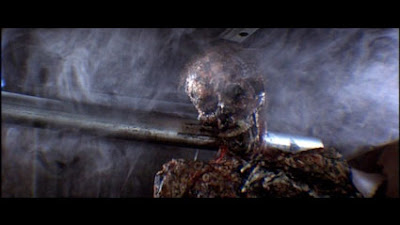 Taking a peek at the storytelling, it's pretty straight forward. It's never said, but one can guess that John and Melanie are an issue, hence the divorce between John and Nancy. Perhaps in an extended universe, they hook up again and make it work as the ordeal in the house brings them back together. But there's not much dimension to characters, and not really anyone that one empathizes with either. It's pretty flat and in several ways it plays as a rack-em-stack-em slasher. There’s also a splendid irony to the movie, as sceptic and hoax buster John, finally turns to his previous team of assistant hoax busters to prove that his house is indeed haunted. Cue demons and spooky lighting. 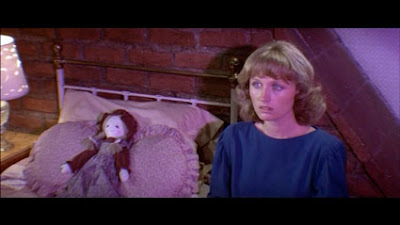 Originally shot in 3D, Amityville Horror 3D host several moments of that amusingly bizarre theatrically overacted scenes and moments to make the three-dimensional effects pop out. Stuff being held a tad too long, up front of the camera. Poses held a bit longer than necessary. Objects moving slightly slower than normally, you know, it's the goofy stuff that makes eighties “revival 3D” such a blast. Like the Friday the 13’th part III : 3D 1982 opening credits, where names and title stab out of the screen…it gets the job done and it’s all in good fun. Some really great moments are spittle towards the audience, iron pipes though a windshield a Frisbee, a stuffed swordfish and my favourites, a rotting corpses and demons jumping out of a hole in the basement. 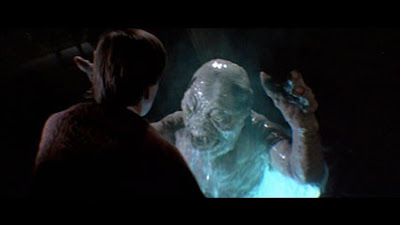 The Njutafilms release, out now, comes with an option of normal, or migraine inducing 3D viewing (glasses included) - which is something of a rarity for this title! Go get it, you know you like dorky eighties horror with special, special effects.

1. The psychic couple in the beginning, which is obviously a parody on Ed and Lorrain Warren - famous psychic bluffers: http://en.wikipedia.org/wiki/Ed_and_Lorraine_Warren

2. The demon/monster/thingie at the end, which is in the movie for like one second :/

Lol. I never knew that about the Warrens. Awesome. Personally I can't watch psychic scenes without yearning for Fulci's Beyond. :D

Demon is cool as fuck. (as long as it keeps its mouth shut and ain't blowing 3D wind in my face...)