The Girl in Room 2A 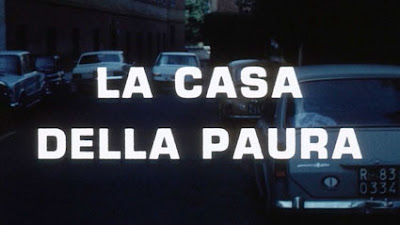 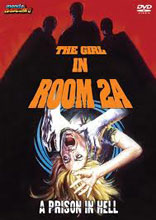 The Girl in Room 2A

Dick Randall, happy go lucky archetype of an American film producer/ writer/actor, with a burning passion for low budget trash and sleaze fare. Amongst his mighty catalogue of productions prowls some of the grittiest dazzling and favoured exploitations flicks co-produced between the USA and Italy, Spain, France, Philippines, Taiwan, South-Korea, Thailand and on and on and on. I’ll say stuff like Guido Zurli’s Lo stranglatore di Vienna (The Mad Butcher) 1971, Fernando Merighi’s Casa d’appuntamento (The French Sex Murders) 1972, Mario Bava’s Quante volte… quella note (Four Times that Night) 1972, Eddie Nicart’s For Y’ur Height Only 1981 and Juan Piquer Simón’s Mil gritos tiene la noche (Pieces) 1982 and you’ll probably find at least one title you like, and then you have a perfect image of what Randall got up to in his thirty years as producer of cheap and cheerful trash cinema. 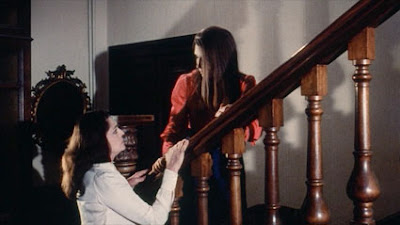 If you’ve been keeping up with Mondo Macabro’s catalogue these last couple of years, you will definitely have seen the names of several Dick Randall produced movies, amongst them the more recently released gialloesque sleaze thriller, The Girl in Room 2A.

A pretty grim initial attack – during the opening credits, talk about being effective - eagerly sets the tone, as a young woman is kidnapped by masked strangers, drugged, striped naked, strung up to the beams of a roof, tortured and then tossed off the side of a cliff to her death… There’s no doubt about it, from here on this movie is probably going to be on the rough side. 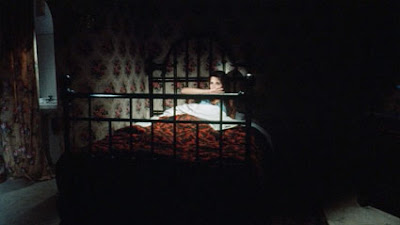 In stark contrast to the violent opening, we’re introduced to our protagonist Margaret Bradley [Daniela Giordano] as she’s released from prison peacefuly chatting to the wardens. She goes straight to her halfwayhouse under the supervision of Mrs Grant [Giovanna Galletti], claims to have been incarcerated innocently, and that it all had been a mistake, which obviously makes her backstory suddenly become intriguing. To thicken up the plot, there’s a lurky geezer following her around, and installed in her temporary residence, she notices a big blob of red – supposedly blood – that won’t wash out from the floor of her room. Definitely lifting a trick of two from the Italian Giallo genre, shutters slam, the landlady acts suspicious, footsteps stalk outside her door at night, a character has a mannequin fetish, and a red gowned, red masked figure haunts her dreams… but is it a dream? 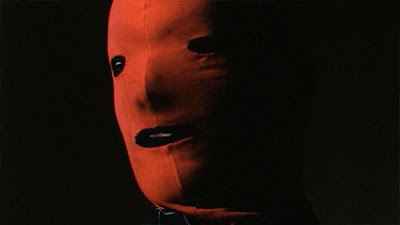 By chance the landlady’s son Frank [Angelo Infanti], is in cohorts with the sinister Mr Dreese [Raf Vallone] who takes an eager eye to Margaret. There’s a little hook that keeps Margret from leaving the cooky landlady and her snooping son, Margaret can’t leave before she’s paid the first rent. So she need’s dosh too become free… With a small loan of twenty bucks from her parole officer and friend Alicia Sundberg [Eurohorror icon Rosalba Neri], Margaret starts to plan her move to freedom and escape from the suspicions apartment of Mrs Grant. 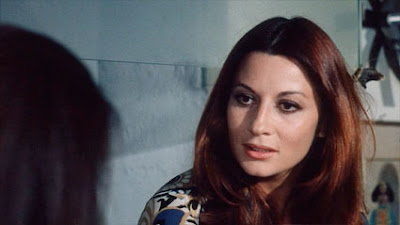 Along the way, we learn just how vile Dreese and the man in red can be, as they turns on a former business partner, torturing him and driving him off a cliff in a burning car. The plot thickens when Jack Whitman [John Scanlon] turns up, telling Margaret the story of his sister’s suicide. Edie Whitman was also the previous tenant of Mrs Grant, and also a former resident of room 2A. 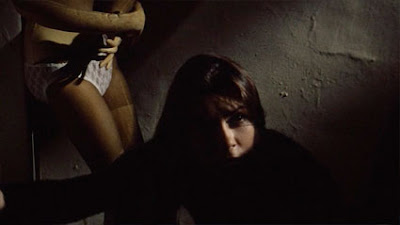 Jack ignites his own little subplot, which goes via Edie’s boyfriend Charlie [Brad Harris], and his wife Claire [Dada Gallotti], who clarify both Margaret and the audience’s suspicion that Mrs Grant’s hostel is being used as a menagerie of victims for the Red masked man’s sadistic pleasure. When Charlie tells Jack Edie ended up at Mrs Grant’s after a short spin in prison, it becomes clear that Margaret better stay on her toes. Which doesn’t stop her or the supposed mourning Jack from dropping out of heir clothes and getting it off, whilst Frank peeps on them from the other side of the curtains… 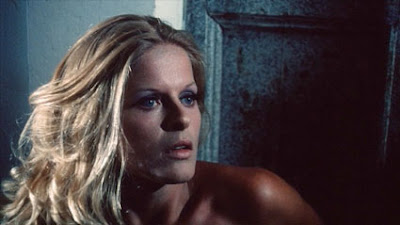 The threat against Margaret is pretty solid now, and gearing up for the last act, the red hooded figure and his thugs make their grand entrance.  Chained up and locked in a small cell in a dank chateau Margaret finally learns what the strange cult is all about, and how they are the only ones who can help her, and the other” Bad girls” repent their sins. It’s a small part, but Karin Schubert is featured as Maria, yet another young woman to move into the Grant hostel, and as we have already learned, bad girls must be punished. Subplots and main narrative all come together in a final climactic encounter where answers are given and the identity of the masked red figure is revealed. 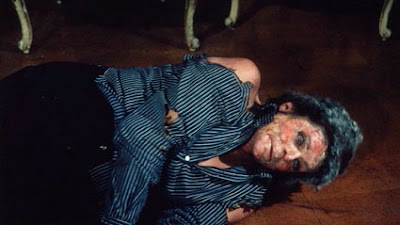 The Girl in Room 2A never really manages to get up there with the great Gialli, although it certainly does tap into genre traits and relies heavily on something of an investigation plot. There could have been more moments where nudity and violence come together, and the greater part of the hooded man’s sadistic torture is told through flashbacks. It is a great moment of depravity, and a quick internet search makes me wonder if there was an even rougher cut of the film, as some seventies bush found on the net, isn’t featured in the film. It could also be the classic publicity shot stunt, so let’s not pay too much attention to that. I’d easily have seen more of it, but despite being an important part of establishing the threat of the climax, it’s pretty sparse. The opening premise certainly doesn’t come through even though the final scenes have a great evil cult, complete with bourgeoisie audience in attendance moment. If one this is underused, it’s the mystery of Mrs Grant and the ominous cult! 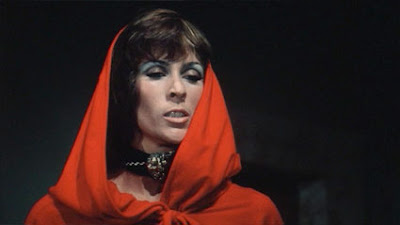 Perhaps it is part of lesser Gialli traits, the sudden stopping in it’s tracks and tossing a mediocre ending at the audience, as a lot of them suffer from somewhat unsatisfying final solutions. The climax to The Girl in Room 2A isn’t’ altogether satisfying and comes off as something of a quick fix. I’m guessing that the lack of eroticism and sexploitative content – which certainly was an area that Rose had tampered deep into back in the states during the Sixties with scripts for several roughies and his direction of the one with the best name ever The Smut Peddler 1965 - may be sign that Rose was trying to move into a new area, more serious film turf and perhaps starting to sever his ties with the old smut peddling sexploitation world. Whatever the case, his plans seemed to have failed, and he unfortunately never made another film after The Girl in Room 2A. 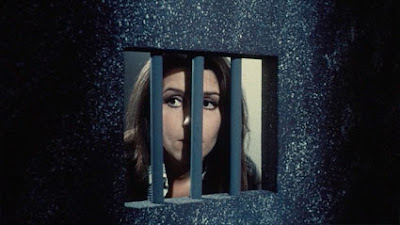 The majority of the score is brilliantly haunting ambient jazzy stuff by Berto Pisano - mostly known for his scores to Andrea Bianchi’s Nude per l’assasino (Strip Nude for Your Killer) 1975, Le notti del terrore (Burial Ground: The Nights of Terror) 1981, and Mario Landi’s Giallo a Venezia 1979. But at the same time it takes on some preposterous proportions during the last act and does more damage than help build towards the climax. I don’t know what the through was at the time, but it almost becomes farcical with a cheesy adventure matinee quality. Needless to say it sounds pretty daft in the context of saving young naked women from a red masked person thrashing at them with a cat o’nine tails. 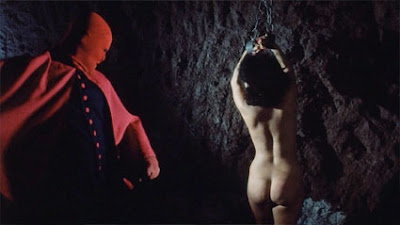 Re-built using part of English and Italian prints to bring the most complete version of The Girl in Room 2A, Mondo Macabro present the film in the finest shape it’s ever been available in to date, uncut, uncensored and unbound! It may not be the top of the crop, but it sure is an delightful little piece that easily makes for some easy watching and the Red hooded sadist is one of those characters you really cant get enough of and cherish every moment of that scarlet insanity.