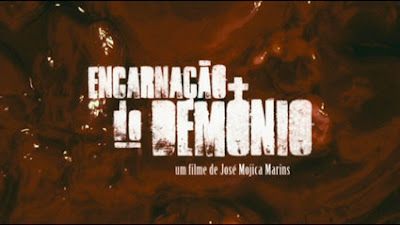 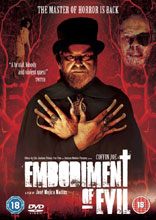 The final chapter, at least as we know it so far, in the saga of Zé do Caixão - Encarnação do Demônio (Embodiment of Evil) is upon us. The part that José Mojicas Marins himself refers to as his masterpiece, the movie he has waited all his life to make. A movie which sees his iconic character Coffin Joe make a final return to the screen in his search for a perfect woman to birth him the son who will continue his bloodline. 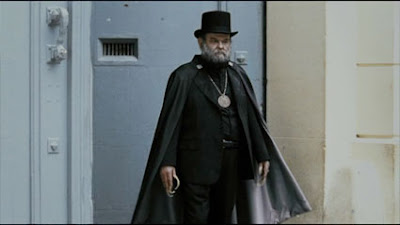 Forty years have passed since Zé do Caixão fell into that murky corpse ridden swamp at the end of Esta noite Encarnarei no Teu Cadáver (This Night I Will Possess Your Soul) 1967. A lot has changed in the world since then, but Zé do Caixão still has his conviction that he must find a woman to further his bloodline, which he tells us in his customary opening monologue. A murky prison, agitated police officials swearing loudly that they have to release a prisoner they have within their walls. Stern dialogue presenting exposition, the man they are about to release the beast! The characteristic nails protrude out through the tiny hole in the rusted iron door. The Prison Governor stares into the face inside the hole and proclaims Josefel Zanatas a free man, begging him to leave his alter ego, the murderer Zé do Caixão, dead within the prison walls. 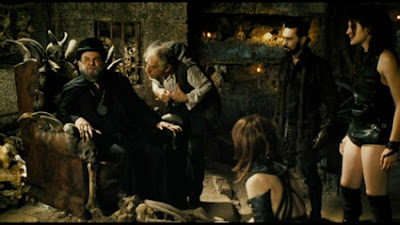 Outside the prison gates waits the faithful servant Bruno [Rui Ressende], who escorts the greyed Zé do Caixão to his new underground lair, complete with coffin, skeletons and new disciples.The disiples line up and start to chant the by now well known mantra "What is Life? It is the Beginning of Death. What is Death?  It is the end of Life! What is Existence? It is the continuity of Blood! What is Blood? It is the reason to exist!" Zé do Caixão has not been left dead in the cell that held him for forty years, he’s alive and kicking and still on a mission!

With the main plot being to once again suffice a woman to further his bloodline, there’s a delicate subplot, which initiates the forces of antagonism and presents the threat of the film, after Caixão saves a child from being executed by the sinister Chief of Police Oswaldo Pontes [Adriano Stuart in his last screen performance]. This is key, as there’s always a scene where Caixão comes to the aid of a boy child in the two earlier films. It’s a metaphor for his desire to father a son and also a demonstration of his anger of not having succeeded at that. 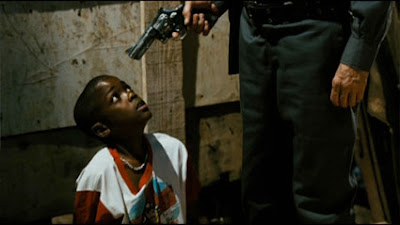 This encounter triggers a vendetta from Oswaldo and his brother Miro [Jece Valadão, who sadly died during production]. There’s a surprise as Miro reveals himself to be the cop who Zé do Caixão blinded in the original censored ending of This Night I Possess Your Soul. The key scenes that where never possible to shoot due to external pressure and conditions put on This Night I Possess Your Soul (which you can read of in that earlier piece) are finally overcome as Marins reconstructs the ending of that film by the fantastic casting of Raymond Castile, a young American collector of monster figures and Coffin Joe impersonator. To spice up the plot further, it’s also revealed that the fact that the Zé do Caixão lawyer Lucy [Crista Aché] who managed to get him freed is Miro’s wife! Rounding up a right raggedy band of companions the Pontes brothers set out to destroy Zé do Caixão once and for all. 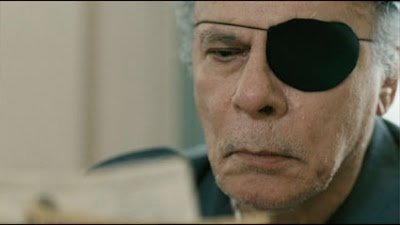 Obviously Zé do Caixão quickly becomes the anti heroic protagonist we empathize with. Partially due to the fact that the Police officials are such profound bastards, who wouldn’t flinch an eye at murdering a child or spouse if it came in their way of stopping Caixão, and also by the recurrent device of Caixão being haunted by his past female victims. Characters from both previous instalments make appearances as they taunt the elderly Zé do Caixão through a well-crafted mix of contemporary effects and actual footage flashbacks. 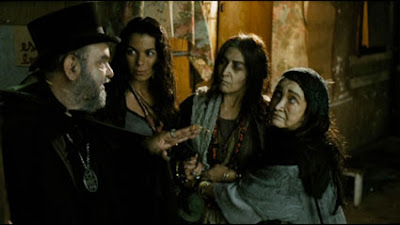 Zé do Caixão plays his game by the book that he wrote, He kidnaps and beds a series of women and put’s them through his archetypical sadistic trials which gives the police officials a moral carte blanche to put a stop to his terror. Aided by Padre Eugênio [Milhem Cortaz], a frantic monk – also a victim of Zé do Caixão’s previous activities also sworn to have his vengeance, they set up the biggest manhunt since they last chased Zé do Caixão into the swamps. Following the pattern of the earlier instalments, the road to ruin goes through these tests, the desire, the frustration, the hauntings and the visions of hell before Zé do Caixão is run out of town by an angry mob led by the Pontes brothers. Hot on his heels, he leads them through the cursed swamp to an abandoned amusement park, where Zé do Caixão, his antagonists and the ghosts all gather for a last showdown. 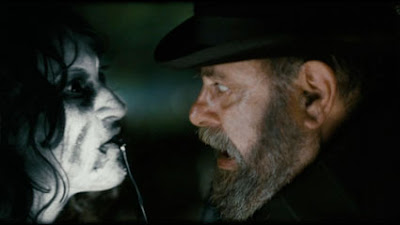 Keeping it contemporary, the key scenes of mayhem are all pretty intense and obviously graphic. Marins holds back on nothing and one can clearly see why he considers Embodiment of Evil his masterpiece as he get’s to show and enact all the stuff censorship restrained him from putting up front back in the day. People have their mouths sewn shut in disturbing detail, there’s the classic Zé do Caixão devices, spiders, snakes, cockroaches. But also cannibalism, baths taken in entrails, giant rat’s rammed into orifices, self-mutilation as once scene shows a young woman eating her own buttocks and the crown jewel of the film shows a woman being reborn from the belly off a huge pig as Zé do Caixão slices the beast open and she crawls out of the carcass! Where the earlier films where received as provocative visual and offensive, they a fade in to the full onslaught of Caixão this time around, all in full graphic, naked, gory detail. Embodiment of Evil is nothing less than one of the most beautiful pieces of trash cinema ever put on screen. It’s a true masterpiece of the grotesque and sordid depravity. I salute the team Marins has assembled for this must see film, as their work is top notch! One thing that has changed though is the dark comedic undertone of the film. A lot has changed since Zé do Caixão was locked in his dark cell, and Marins uses that fact to add some amusing cultural crashes along the way. It brings a sort of “Fish out of Water” tone to the Zé do Caixão character and in many ways it’s apparent that the times have passed him by. 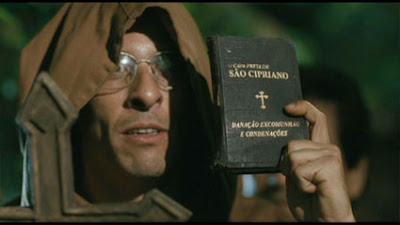 Just like the earlier films, Zé do Caixão is an existentialist. His atheism and goal keep him alive, but as previous films taught us, it’s when he strays from his philosophy that evokes his ruin. Falling for the beautiful Elena [Nara Sakarê], a young woman obsessed with Caixão he falls into a deadly plan. Elena is the niece of two witches who propose to Zé do Caixão that they can release him from his curse childlessness and also lift the threat of his previous victims coming back to avenge their deaths on him. Remember, this is the curse that was cast upon Caixão in the very first film, À Mela-Noite Levarei Sua Alma (At Midnight I’ll Take Your Soul) 1964 and a curse that still torments him almost fifty years later. The only catch is that they want Zé do Caixão to acknowledge his faith, turn to god and they only then will grant his wish. 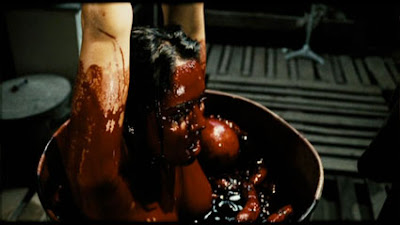 Remember when I talked about how some movies feel like a summary and bookending of plot, story, traits and work back in the piece on Jean Rollin’s Perdues dans New York (Lost in New York) 1989? Well, Embodiment of Evil has that feeling too. Many references to the two earlier Coffin Joe films are noticeable, such as the Witch being present a mere five minutes into the film. Or as Zé do Caixão’s apostles line up in front of him upon his return from imprisonment, he has them recite the opening monologue – which I previously pointed out to be his philosophy – from This Night I Steal Your Corpse. Flashbacks to the two previous films are used to make points about his philosophy, and finally Marins got to shoot his intended original ending from This Night I Steal Your Soul with Raymond Castille a spitting image of  the young Zé do Caixão. In many ways this brings the arc of the three films to a culmination. The film does end as the other did, with a Zé do Caixão presumed dead, but for once, just this once, Zé do Caixão may actually have won! 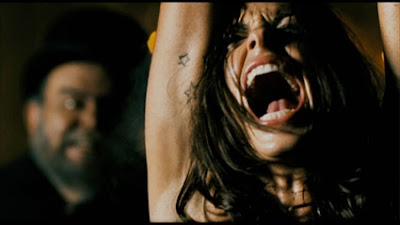 I’ve previously mentioned that one should explore these three films of the Coffin Joe series in a chronological manner. I stand by that, as through watching them in this way, you will see how the arc follows through the films. You will also understand the impact the ghosts have on Zé do Caixão in a better way. You will also understand just how wild José Mojicas Marins actually goes with this final part when you have the previous two in mind. Embodiment of Evil is a superb finale to a string of fantastic films, and undoubtedly one of the few examples of a last instalment making the largest bang. 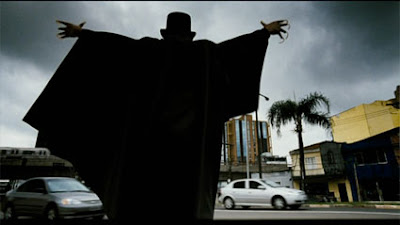 Do yourself a favour take the time to follow the chronicles of Zé do Caixão as they where meant to be seen and enjoy the naked, violent and strange world of Coffin Joe in all their grandure.