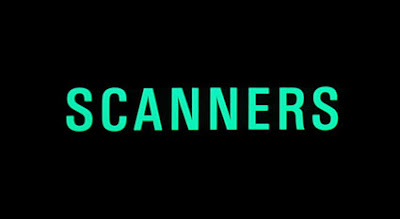 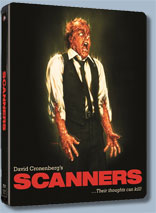 I really enjoy going back to movies that I haven’t seen in the region of twenty years. At one point in time David Cronenberg was making some immensely disturbing genre pieces, melding classic thriller structures with neo horror in his own realm of body horror. Cronenberg has since long back moved on to explore other areas, leaving body horror behind with the seminal work eXistenZ 1999 and dwelling into more psychological themes, but the good old gooey gore and shock films are still key movies and finally they are starting to hit BluRay releases, such as Scanners and it's two sequels. 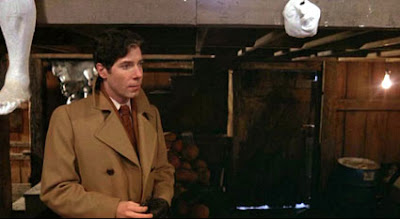 Set in a possible future, this is the tale of war, psychic war between individuals with extreme mental powers. It’s also the tale of cooperation’s trying to control these individuals and the struggle against renegade fractions within that narrow circle of individuals with the powers. A renegade circle, with the intention of murdering all those who won’t join their cause. 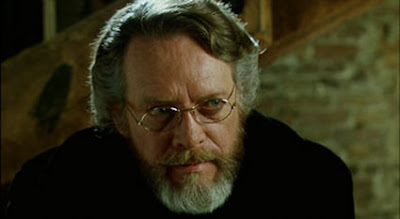 Scanners is a classic in all the right ways. A strict anti thesis to the horror films being made at the time it avoids the homicidal maniac lurking in the shadows, the teenagers rumbling around smoking pot and getting laid, the dorky dialogue and hip soundtrack. This is all, dark possible future, told through Cronenberg’s characteristic slow but progressive style of twisting and winding it’s way through the film with some serious moments of the grotesque. If you are amongst the few genre fans who never saw Scanners then you really need to add this one to your pre-book list as Scanners contains some of most amazing special effect work ever put on screen. Still not convinced? Try a head exploding into a thousand pieces with blood, brain matter and cranium pieces flying all over the place. 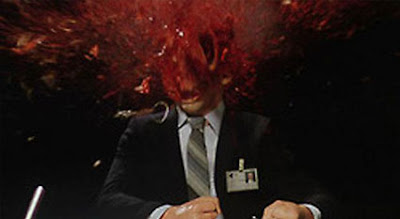 Scanners is a classic that deserves to be seen, and this BluRay presentation is fantastic. You can even see what LP’s the set designers placed on the shelves in an action scene that takes place in a record store – they must really have been into Frank Zappa’s Sheik Yherbouti!

Cronenberg sets the key ingredient of Scanners up with an effective initial attack, an initial attack that somewhat disorients the audience and creates a curiosity about character positioning. Cameron Vale is provoked by two women at the food court, tries to avoid it, but still torments one of the women, almost killing her with his psychic abilities. The trench coated men start to chase Vale through a fantastic looking mall before shooting him with a tranquilizer dart and taking him in to Dr. Ruth. So far we have learned that this is a movie with characters that possess psychic abilities, abilities that can be used in a negative way. We also understand that they are in some way persecuted, as that’s what the chase, tranquilizer dart and Vale being restrained to a bed and subjected to some for of experiment by Dr. Ruth. It’s easy to presume that Vale is the antagonist of the piece and we are lead on to think so for a while until the movie hits the ten minute mark and Michael Ironside’s Darryl Revok is introduced. The introduction of Revok also brings that iconic moment when he’s brought up on stage during a scientific display of “scanning abilities” and makes Louis Del Grande's head explode into a bloody 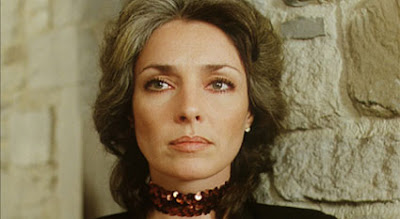 Revok is caught in a fashion similar to that of the initial attack with Vale, although he manages to use his psychic abilities to manipulate his way free and for a short while he almost comes across as a possible protagonist with all we have seen so far. Men in trench coats persecute the characters with psychic abilities, the Scanners. Exposition time, as the board of CONSYN discuss the violent events of the previous night. We learn that an underground network of Scanners are murdering all scanners not associated with them, that Dr. Ruth has one Scanner hidden away that the underground do not know of. Ruth also suggests that Vale be their assassin and terminate the leader of the underground, the immensely powerful scanner Darryl Revok. 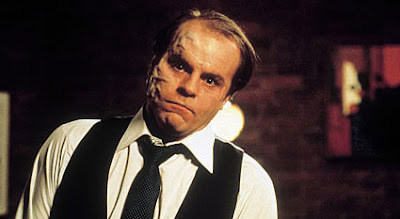 It’s a great establishing of the ordinary world which Scanners will take place in. We now know that there are characters with psychic abilities, that there’s a cooperation involved, that there’s a lethal conflict between good and bad Scanners. Our two main characters have been explored and positioned at polarized ends of the spectrum and are now ready to be set against each other… David Cronenberg master at setting ends against each other and always hiding secrets within the narrative does precisely that with Scanners, where many surprise reveals are about to come forth.

This is where the investigation plot comes into play. Cameron Vale sets off on his mission to find the other Scanners and join forces with them in a struggle to stop Revok. It is an investigation plot as the search takes Vale through a series of encounters as he works his way forth. Each encounter leads to new knowledge and finally he stands face to face with Revok. 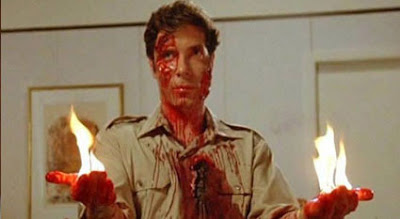 The last act presents an interresting rush of insight, where we learn how characters, the various drug corporations and lives all intertwine. Perhaps not a complete surprise with today’s standards, but at the time a neat one, which I guess nobody, saw coming. The final battle showcases those great special effects once again and culminates with classic Cronenbergian mind game imagery. Scanners is a great movie, one that sometimes becomes forgotten in-between the run of successfull of horror flicks that Cronenberg made at the time. Scanners has passed the test of time and still is a damned good movie. Early special effects and a great Howard Shore soundtrack (Shore who Cronenberg started working with on The Brood back in 1979, and still to this day still uses as composer on his soundtracks) make a great time document, as does that superb Mall interior during the first ten minutes of the film, but the story of Scanners still works and engages. I’m sure that any filmmaker today wanting to show “psychic forces” in play would also have used non-diegetic sound. It’s a fun detail. 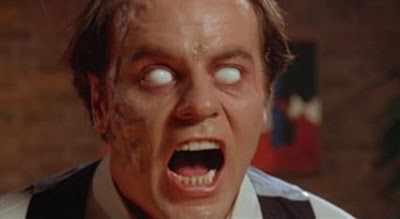 Cronenberg has a great cast come together in Scanners. Stephen Lack, who’d later reunite with Cronenberg on Dead Ringers a few years later as lead Cameron Vale, Jennifer O’Neil as Kim Obrist, Patrick McGoohan as Dr. Paul Ruth and Michael Ironside as Darryl Revok. Vale, Obrist, Revok, all names that have that mysterious Cronenberg ring to them.

The upcoming Second Sight release of Scanners is a superb edition, and I question if the film has ever looked better. As usual the Second Sight edition is filled up with extras in the shape of interviews with cast and crewmembers. Scanners II: The New Order and Scanners III: The Takeover are also making their debut on BluRay simultaneously with the original.

David Cronenberg’s Cult classic and mind expanding shocker Scanners is available on BluRay from Second Sight on the 8th of April.

I rewatched SCANNERS on dvd not long ago and it's still a WONDERFUL film. I remember being downright angry at the schmucks who made the sequels for turning them into plain action movies. At the time I felt they'd completely misunderstood what Cronenberg did with the first one. It's a psychological horror film, not a stupid action movie. Well, I oughtta give them another chance as I haven't watched them since the original vhs viewing many yrs back. The two SCANNER COP sequels are great though!