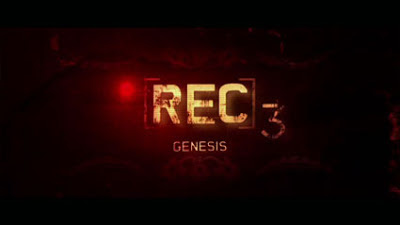 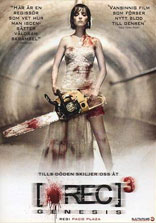 Why the hell are people giving this film a hard time? Do they not see how this part fits into the series? Are they anally stuck in the groove of the first two? What is it they don’t get with this part? Are they annoyed that the film has an immensely strong and determined female protagonist? The first one did so why not this one? It plays by all the same rules, starts off with the found footage /raw material lark and moves on from it… for real, would you really want a third entry all shot through the viewfinder again? If that’s your bag, then you may want to stick to the Paranormal Activity or Resident Evil flicks and see how long you can take it. Despite it being against our human nature, change is a good thing, and this kind of ignorance is what generates trouble for innovative and original movies. [REC] 3: Genesis is totally being trashed for all the wrong reasons and I’m going to tell you why it’s a better film than it's being made out to be. It’s the wedding day of young couple Clara [Leticia Dolera] and Koldo [Diego Martín]. Cue handycam photography, and Clara’s almost on camera confession that’s interrupted by distortion just as she says hat she’s going to share a secret with the young cinematographer. Family and friends meet and greet each other at the church before the procession. Here comes the bride. The procession moves over to the reception in a huge party hall in a city park. It’s all cake, drinks, dancing and a happy day until one guest falls off the balcony down onto a table two floors down. As the guests rush forth to check on Uncle Pepe [Emilio Mencheta], he springs up and takes a huge bite out of his wife’s neck. The virus hits hard and within moments the party is divided into two groups, hunters and prey. In the panic and confusion that follows Clara and Koldo are separated although swear to be reunited and defeat the undead beasts that are chasing, savaging and eating the guests all locked in the party hall. 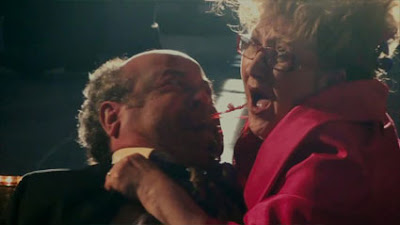 There, that’s the story, and compared to the previous two, it’s the same thing. Survival horror in a secluded location! Nothings changed, apart from the stage not being the central flats of the two earlier films. One huge change is that when the shit hit’s the fan, the eye-view gaze is dropped for a normal feature cinematography. Something I find effective and necessary to bring a new focus to the story and not the gimmickry, which was great in the original and started to loose its charm already in the second part. 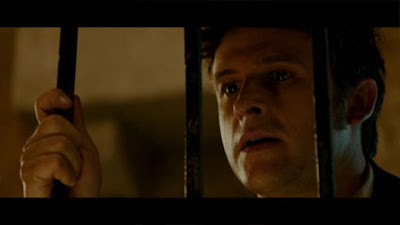 Personally I thought that the second film was somewhat a let down, especially the religious hokey pokey aspect of the film. I get it, but it’s kind of out of place for me. So seeing that angle being used as in this third part kind of makes up for the religious play in the second as it’s obviously going to be part of a larger arc to run through the series. I’d love to see the final part explain the religious aspect further, because if this is a blood disease, then why does religion affect it? Questions I hope the final part will answer to some extent, but not completely expose as we really don’t need answers to everything. Some of the mysticism needs to be kept intact.

Paco Plaza is a trickster with suspense and uses our own anticipation to wind us up. It’s classic Hitchockian gameplay. Place the bomb under the desk, show the audience, then sit back and watch them get stressed out as the leading man walks into the same room, completely unaware of the ticking danger that will explode at any moment. That’s exactly what Plaza does with the establishing setup of [REC]3: Genesis. He introduces us to a new set of characters, a new ordinary world if you like, and plants the bomb as Uncle Pepe shows off the wound he got from a dog he presumed was dead but sprung back to life and bit him in the hand down at his veterinarian clinic, the first of many tie ins with the world of the first two films, and then smoothly build up our anticipation of the first attack. 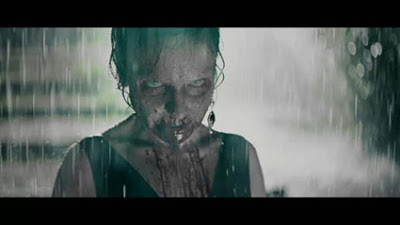 Another fine detail that ties in with the first two is that the reflections of the infected look like Medeiros from the earlier films. Small details like this are interwoven throughout the film – then again, the way some people seem to connect original films with their new sequels/prequels with out a solid hard “And this is where the other one started” plaque these details are probably lost on a lot of popcorn chomping conventionalists. But at the core of the film is a value more important than any of the other two. Those films where just about survival, plain and simple survival horror, albeit done with fines and the first viewer gimmick.. This one is all about protecting life! Their love for each other is a valuable one, and the secret that Carla holds is a most valuable one. It’s not about surviving the moment and it’s not about getting out of the location. It’s about saving their future together. This is why the narrative is so engaging; the value at stake is a noble one and one that is significant to mankind.

At the hour mark, the passageway into the last act, the two newly weds have a chance to be reunited, and Plaza makes the most of it creating a fantastically intense scene where all that has been fought for is at stake. Again small details that have been planted earlier on come into play and are cleverly used in the story. Compared to a lot of the current infection/zombie horror that I’ve seen lately, I really found [REC] 3: Genesis to kick some ass. 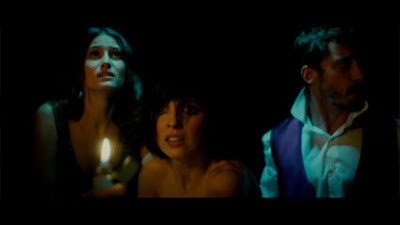 Plaza gets some funny tension relieving jokes in there too. The way the various camera sources capture small fragments of the plot, the way the photographers interact with each other and the moment that shifts the film from viewfinder horror to full-blown fright fest. I love the Sponge John gag, and the copyrights guy who’s the but end of several lines. There’s also a great feminist angle if you choose to search for it, as Carla is the dominating protagonist of the piece. Male roles are frequently used as vulnerable, weaker characters. Where they suit up in armor and hide, Carla tears up her dress for more space to move with and arms up with a chainsaw and let’s that power tool rip! If nothing else, the gore and effects from here on should have satisfied the majority of the mopey crowd. So even if [REC]3: Genesis brings a vague dark comedic element to the arena, it’s still not a comedy, not even close. This is horror playing pretty close to a convention, so what’s the problem. Next the Internet will be filling up with reviews hating that the new Evil Dead isn’t funny enough! Change is good.

It’s almost like a pack behavior, where it only takes one negative to influence the rest of the mob as they don’t have enough balls to stick to their own opinions. Nobody can point out what and why it is supposedly a bad film, they all chant to the same “Letdown, disappointment, not a REC movie”, but without making point of why and what… again, change is good, do not resist it. Keep up, do your homework! 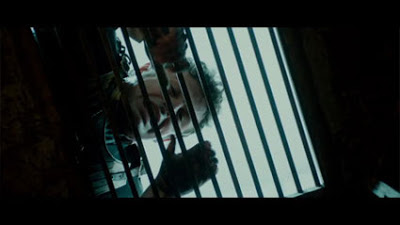 I would have liked to see [REC 3] with its “Genesis” subtitle to have been perhaps more of a genesis story, but if you know your bible, you will understand the reason for this subtitle, as Genesis is the chapter that Priest reads from the bible, genesis – the creation of the earth… I can’t wait to see where Jaime Balaguero takes the last part and then watch the series back to fucking back with a bang!

[REC]3: Genesis is a straight up honest horror entertainment and the full arc may disclose how it fits together (if you didn’t catch the many links to the others already) with the final installment later this year. I’d easily bet that there will be some connection with this part in the final one too. To think that Plaza and Balaguero with their co-writers haven’t been talking throughout is insanity, and after all when both films where presented in Cannes back in 2010, the tagline was TWO radically different NEW films… One last time, all together now, Change is good! 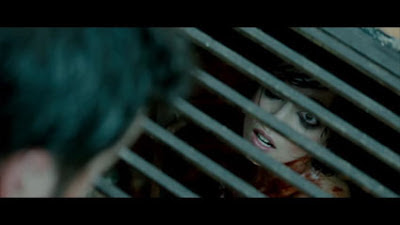 [REC]3: Genesis is an emotional film, and a devastating film, a love story in hell and a fucking great sequel. Where so many “infection/zombie” films have tried to portray heartbreak and sorrow of the lovers facing one half of them slowly drifting into death – only to become an undead – [REC]3: Genesis nails it so beautifully and delicately that it will bring tears to your eyes.

I watch the movie on your recommendation and thought it was a thoroughly satisfying film! It was scary, funny, and reasonably intelligent. It much better than some of the new films like Mama.